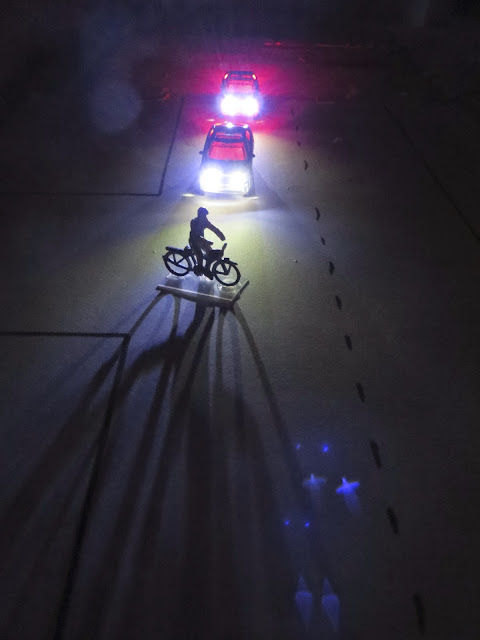 This morning I wanted to write a very long, heartfelt post about the need for every adult who lives and/or works in Stamford to take the Stamford Share the Road Survey, which is something I developed with People Friendly Stamford to get feedback on a number of proposed bike lane and sharrow projects around the city. (If you are one of my readers from Stamford, please click here to take the survey and forward the link to another Stamford resident or worker you know).

But instead of that post, I am writing this one - as a bit of a response to the report I just read.

The 2013 Connecticut Transportation Survey, just released by the Connecticut Business & Industry Association is important. The perspective from businesses in this state on transportation issues is vital and they must have a seat at the table when we talk about how to make Connecticut work better.

But where they lose me has to do with one of the findings.

What I'm talking about is found on page 7 and probably getting the most coverage in the press. It shows a ranking of the 'most beneficial transportation project for the state and its businesses' chosen by the survey respondents.

The big winner: 'Expand highway capacity/improve highways' - cited by 55%. And as you would expect, I-95 (which affects every decision I make when trying to decide when to leave Stamford to visit my parents in Mystic, Connecticut) was named specifically in the report.

Adding capacity probably means adding a lane, and I thought it would be helpful to readers unfamiliar with I-95 to see a rendering of what the highway currently looks like with three lanes: 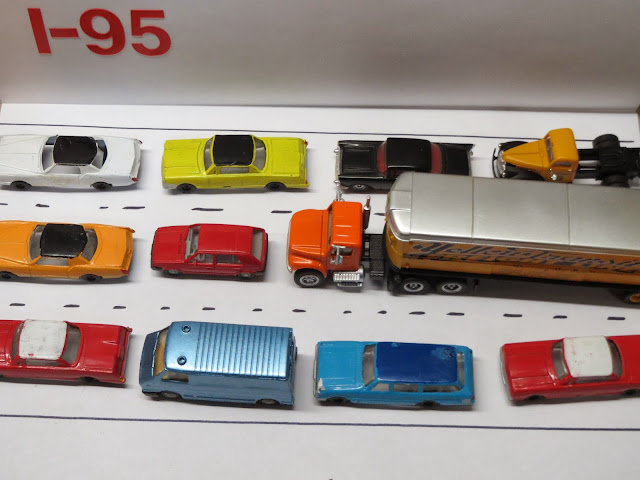 That was a photograph. It could have been a short video. Things move quite slowly a lot of the time on that particular highway.

And now, just in case you can't use your imagination: here is what the same highway might look like with four lanes. 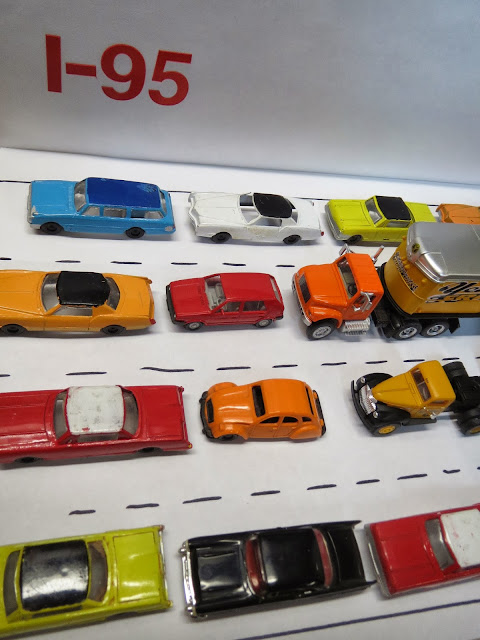 Now I don't normally get all militant/crunchy granola/Prius-with-a-'Save-the-Planet'-bumper-sticker-on-it with this kind of matter, but let's ask ourselves something: don't  motor vehicles just expand to take up the amount of space that is given to them?

I am not mocking the CBIA, nor the businesses who took the survey and were among the 55% that named 'highway expansion.'  In the context of a multiple-choice question, it may have been the choice that made the most sense for people to select (the question did have a  'write-in' space if available choices didn't contain the respondent's answer, and 'other', according to the survey, was named by 6% of respondents).

But we have to wonder if expanding the highway is really the best course of action even though we all agree action does need to be taken. A theme throughout the CBIA report is that congestion costs. 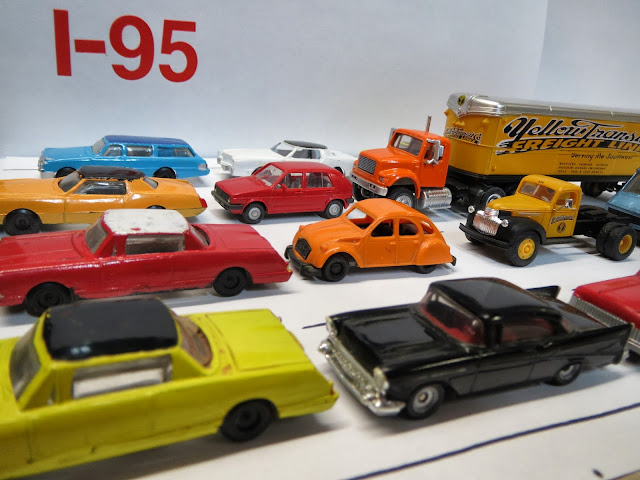 The truck in the photo may have stuff in it that needs to get to a store somewhere, and the longer that truck stays on the road, the most expensive that stuff will be when it finally arrives. Whether the business takes that cost from their bottom line or from the consumer is a real problem, but if we all take a laser-like focus on increasing highway capacity, we'll probably have a long wait for a solution that probably won't solve very much at all.

What if there was an option on the CBIA survey question that looked like this: coaxing people who do not need to be on the highway to stay off of it. How many respondents would have clicked on that choice?

Come to think of it, what if that point is discussed more in general?

Instead of increasing the supply of lanes, that's about reducing demand on them- and I'll bet that's easier and cheaper than anything that involves placing orange cones on I-95.

The next time you're on that highway, look for people who hop on it just to get off after one exit. Me, I have lost track of the number of people I know who tell me they'd ride their bikes to work if there were bike lanes and other things that would make the activity safer. What if a couple - only a couple - of those one-exit people disappeared and showed up on bikes? 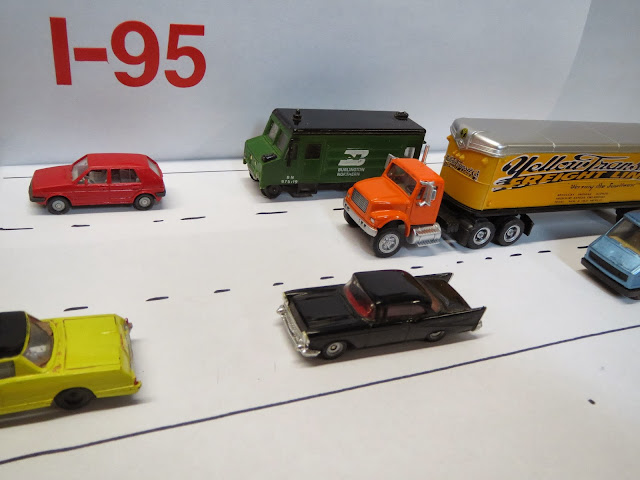 I also often wonder how much it would cost this state to put a bike lane the entire length of Route 1, which goes near the coast a lot and passes near a massive number of small businesses. I'm guessing a move along those lines may bring up the number of people who use a bike to get to work (according to the CBIA survey - 91% of business leaders believes their workforce use a personal vehicle to get to work) and reduce strain on the highway, thus giving more room for the truckers and the long-distance drivers.

So when we talk about transportation upgrades, a big part of the discussion has to be about making biking easier and safer. If we are going to talk about what more we can build, it's probably a better idea to start there and with any idea that gives more public transportation options to people who need to get from one place to another. It makes more sense than adding road capacity, which enables the reliance of single-occupancy vehicles that have gotten us in trouble in the first place.

In closing, please read the CBIA report and, if you live or work in Stamford, take the Stamford Share the Road survey - if we want  to talk about what we should use our tax dollars to build, let's start with paint before pavement. It'll be cheaper, less disruptive, and will probably go further to bring the people and businesses in this state to a better place. Thanks for reading and thanks for riding. 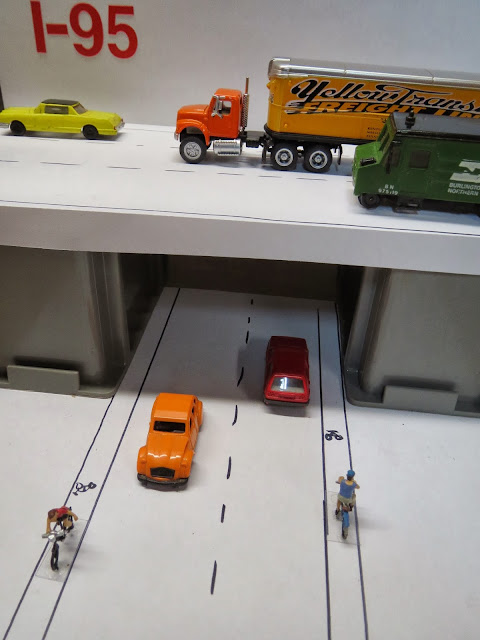