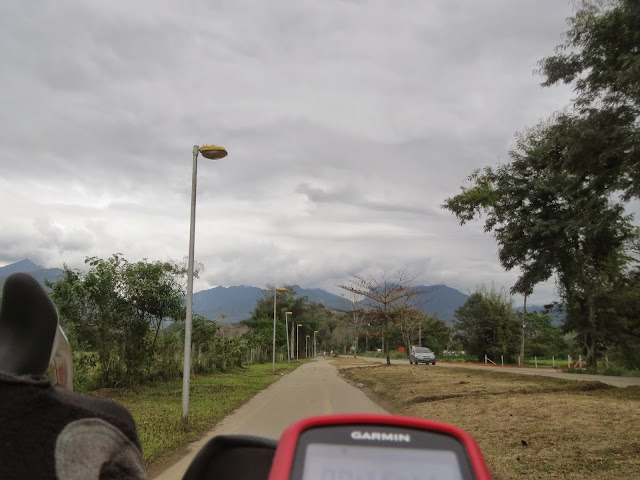 On any normal international cycling vacation that coincides with the Urban Sketching Symposium, the second day is the most exhausting.

My trip to Paraty was a normal international cycling vacation.

As my wife headed out for another day of mingling and sketching with fellow talented artists, I decided to ride out toward Cuhta, which was really my only shot for an adventure that would get me back in time to have dinner with my wife and, for sure, some of her fellow sketchers. I had ridden a bus from Rio northbound on 101 so I knew what lay to the south and I had already seen Trinidade, which was north.

That left the west. 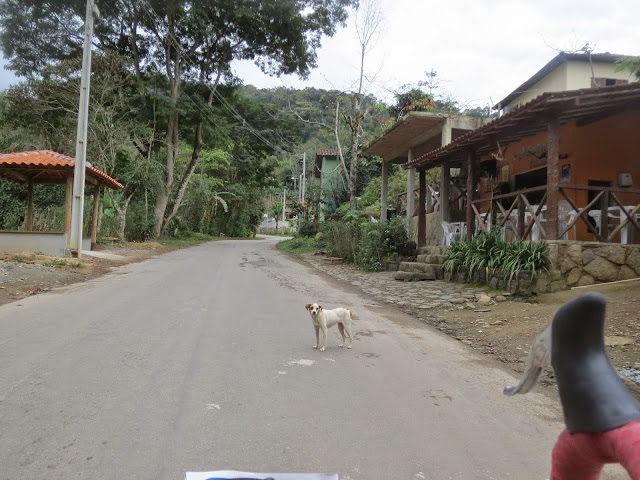 The first few miles were fairly easy - I felt like the 1,000 foot climb the previous day was a pretty good warm up. The incline during this period was gradual and took me by a few houses. It was also fairly smooth but every so often I'd think to myself: this is where I'm going to get a flat. 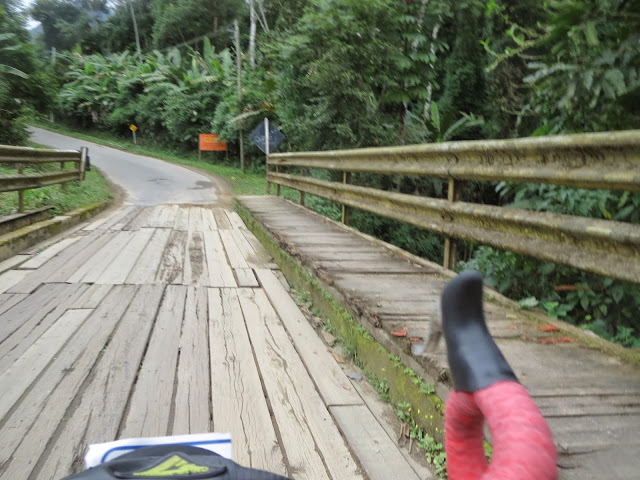 Beyond a touristy-looking restaurant I saw about 700 feet into the climbing, the buildings became less frequent. A lot less frequent. It was very quiet. Cars became rare. At times I was sure I was the only person around for a mile or more in any direction - and this feeling was reinforced by the animals I saw on the climb. 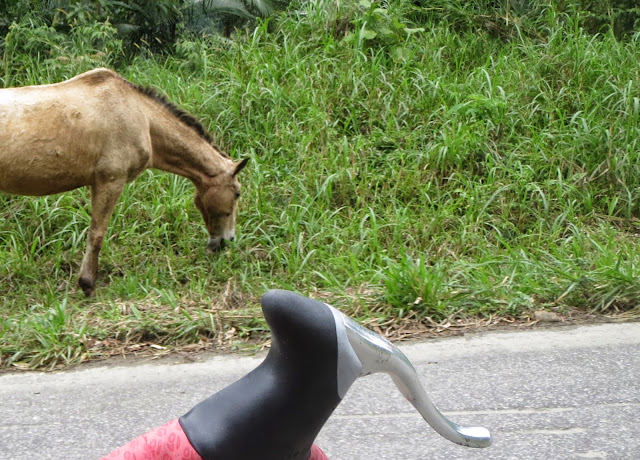 The riderless horse had no saddle and no markings. It was just grazing peacefully along the side of the road, ignoring me.

The same couldn't be said for the next animal: it was a white goose in front of what appeared to be a gift shop that had the front door open but no one inside. At this point I was about 1,500 feet above sea level, and I could look beyond the gift shop and see Paraty. 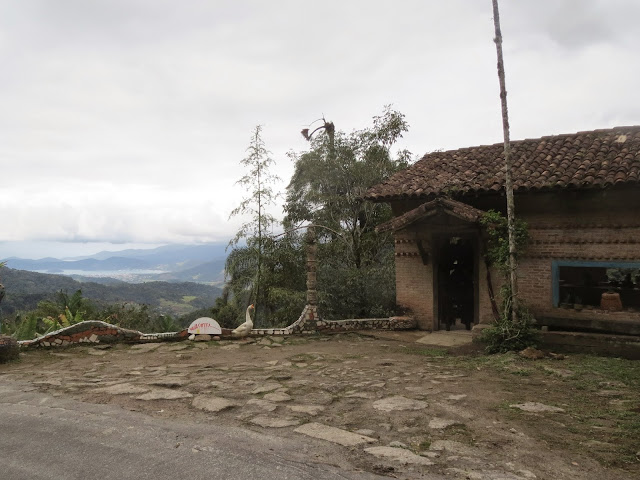 The goose kept honking at me but didn't get in my face or send for reinforcements, so I felt safe as I put my camera on maximum zoom and took a shot that told me how far I had climbed so far. 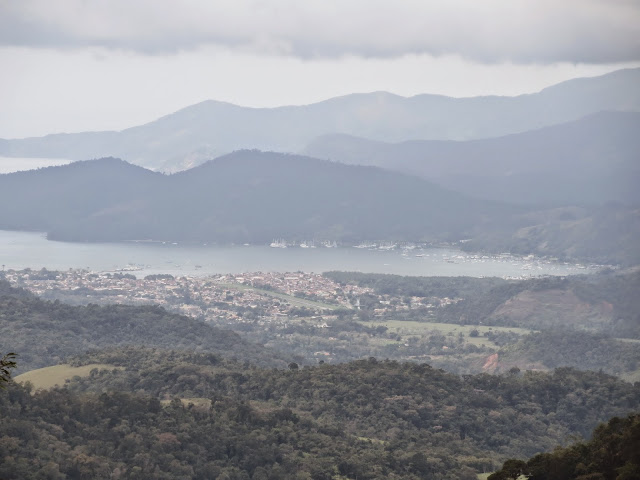 Naturally, my next thought was: climb some more. I still didn't have a flat and my legs weren't quite ready to quit.

Around 2,000 feet the pavement disappeared. At first the hard-packed dirt was actually smoother than most asphalt in Brazil so I didn't mind very much. 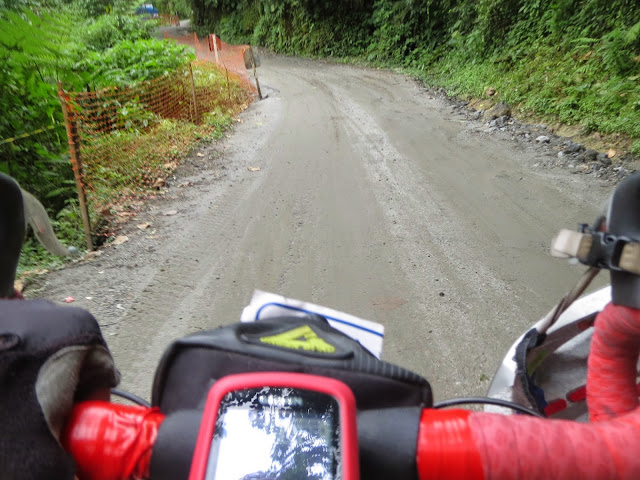 But it didn't last, and small, sharp rocks began greeting my 115 psi tires. Still, I kept a sort of inner peace about getting a flat tire. Taking a road bike on this kind of terrain was pushing my luck to begin with, so I knew I was going to get a flat, and if I did it would just be part of the adventure.

As I climbed higher - still flat-free - I noticed a broken-down car off to the side that nobody had bothered to tow - I had passed a 'no trucks' sign earlier and didn't see how a tow truck could make it up this high to begin with. 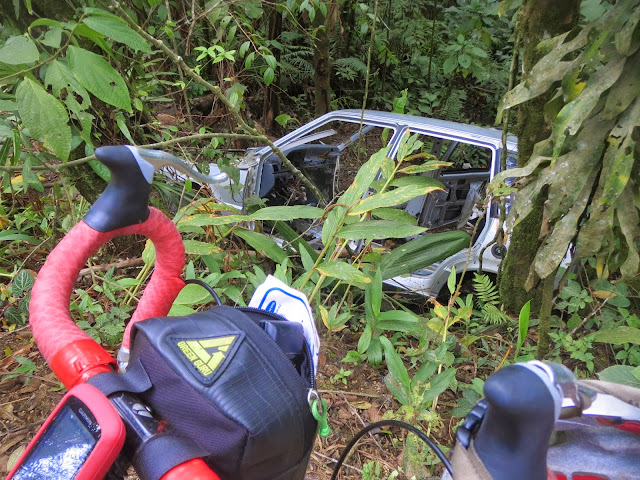 I climbed on. The terrain just kept getting worse and the cars became even more rare. It made sense because in places the road was just plain dangerous. 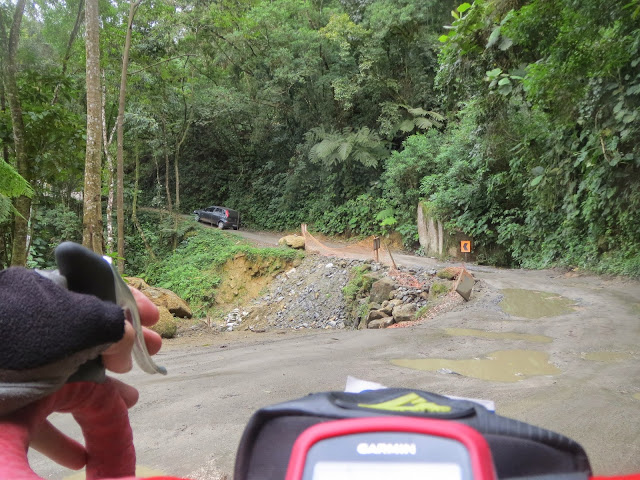 The altimeter passed 2,800 feet by the time I arrived at a place called Bar do Menininho. Another wrecked car - a blue one - lay just off to the side and it was the only vehicle I saw during the 15 minutes I had stopped here to rest. I couldn't tell if it was off season, abandoned or both. 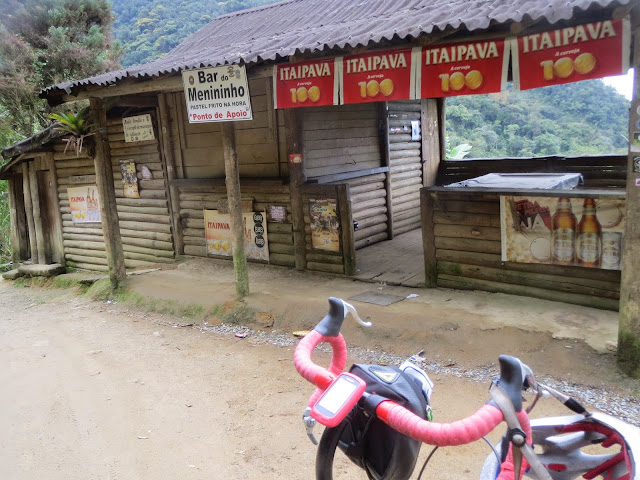 Up a little further, I was greeted to some more great views and the promise of biking into the clouds. 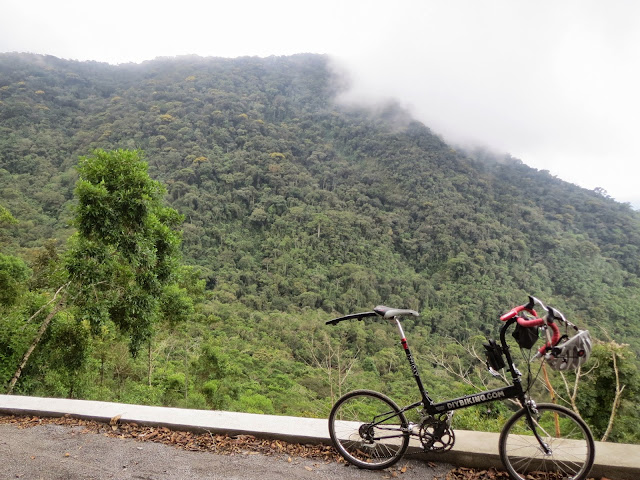 I climbed more in short, single-digit bursts to keep my calves from throbbing. Just as the altimeter passed 3,000 feet, the road became worse than ever. 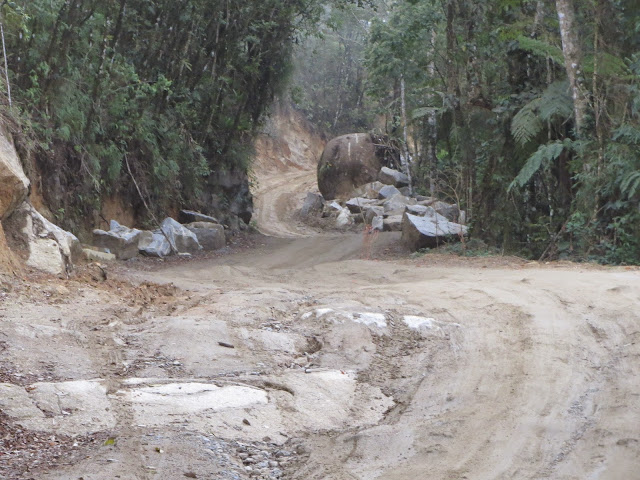 Even with the hard tires, the Bike Friday stayed upright and didn't sink into the ground. But the problem I had was with the mud. Here it took on a consistency I had never seen before. It was an Elmer's Paste/Play-Doh/Superglue hybrid that stuck to everything and caked on everywhere. 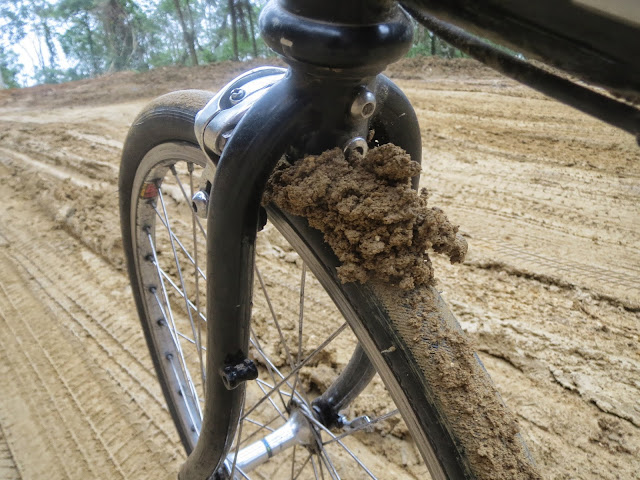 I had to clear the mud several times and was making less and less progress. Finally, I realized I was very close to the top: while standing alone with my bike after climbing higher than the peak of Mount Monadnock in Jaffrey, New Hampshire, I stood completely still on tired legs and was greeted by this breathtaking sight. 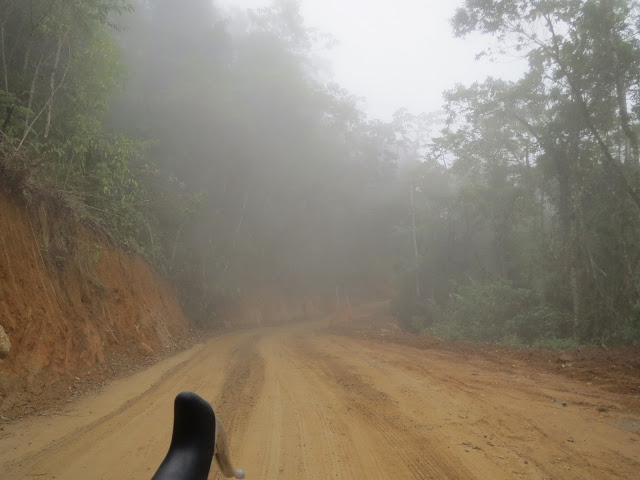 I wished I had thought to take a short video: this is a cloud scraping against the top of the mountain at 3,200 feet. And I was in it. Save for a little wind it was completely silent.

I decided to spare myself and my bike by not continuing further and descending down the other side. It would have to wait for another trip and a full-suspension mountain bike, I thought.

Now it was time for the descent. I turned the bike around. 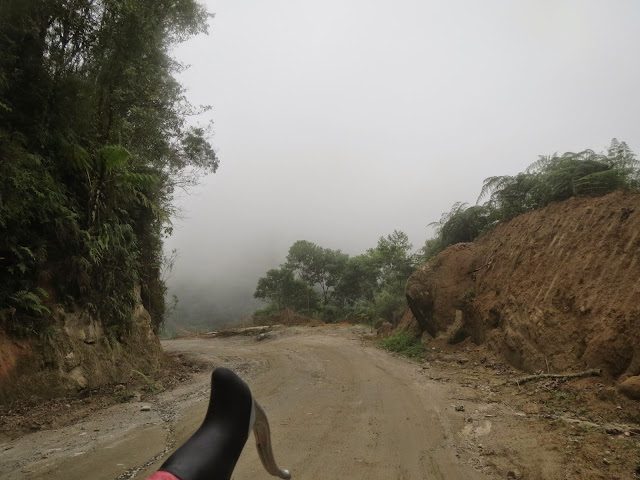 Terrain I had crawled over minutes and hours before now blurred by. The Bike Friday rattled over the rocks - sending (without my knowledge) the rear fender I had fashioned from a piece of car trim off into the road and never to be seen again. If I had fashioned a small parachute instead it would have saved my hands and kept my brake cables from stretching.

Occasionally I'd stop to rest my hands and take in the view of a place I didn't check out properly on the ascent. I even took a selfie. 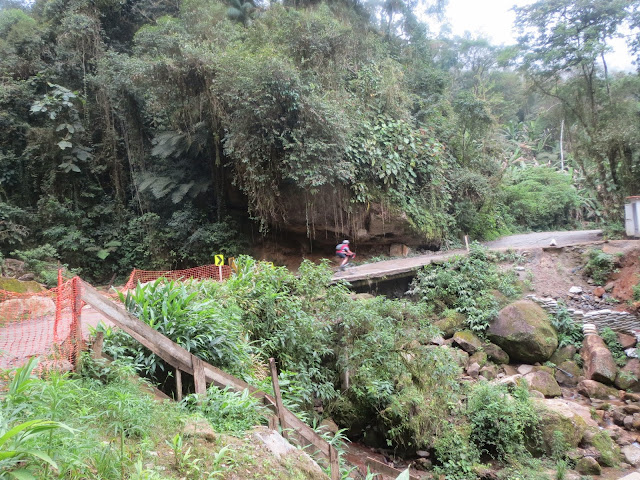 This is my best side. The photo is a lot less impressive when you realize I had to stop, turn around, and go back to pick up the camera. Very much like Les Stroud from Survivorman.

The ride continued - and much to my amusement the horse I had run into on the way up was still grazing his way up the mountain - and still didn't pay me any notice. 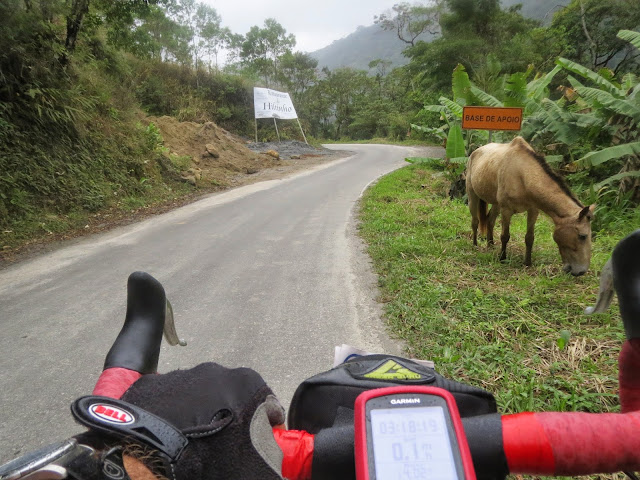 Speaking of animals: the goose guarding the gift shop was still there too, and there were still no humans in sight. The goose resumed honking at me and I wondered if it was trying to tell me something. "What's that? Trouble at the old mill?" 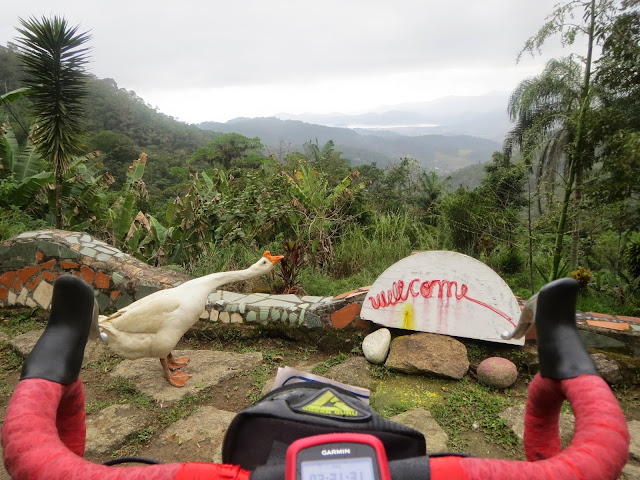 I descended so quickly to 700 feet I felt my ears pop and the temperature change. Finally I stopped at a restaurant I had seen earlier - Restaurante Engenho D'Ouro - and had a late lunch. It was perfect because it was a buffet, and once again a very polite person was willing to put up with an American tourist who couldn't speak the local language but understood pointing. 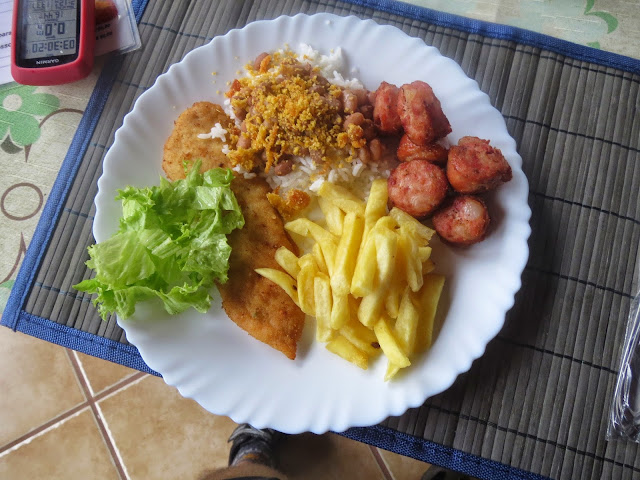 Fueled, I meandered back a bit - first biking near a distillery (the same one my wife had sketched the previous day) and then up another dirt road that led to a waterfall. 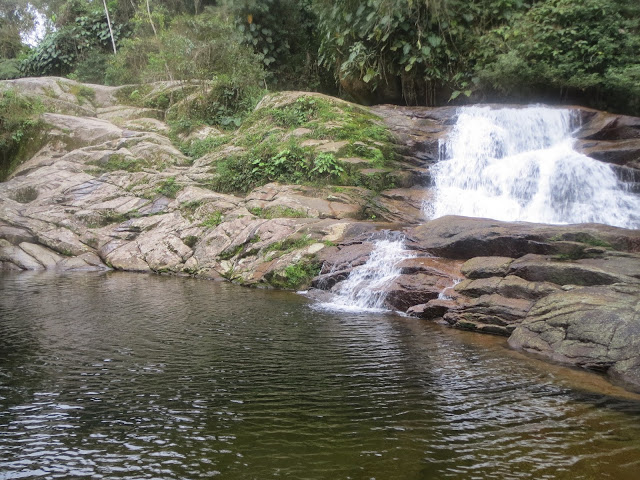 On the way back down this road, I found something interesting that I thought would make a nice souvenir and put it in my handlebar bag.

Soon I made it back to civilization - which, like in other parts of the world, consists of a paved, well marked and car-free bike path. 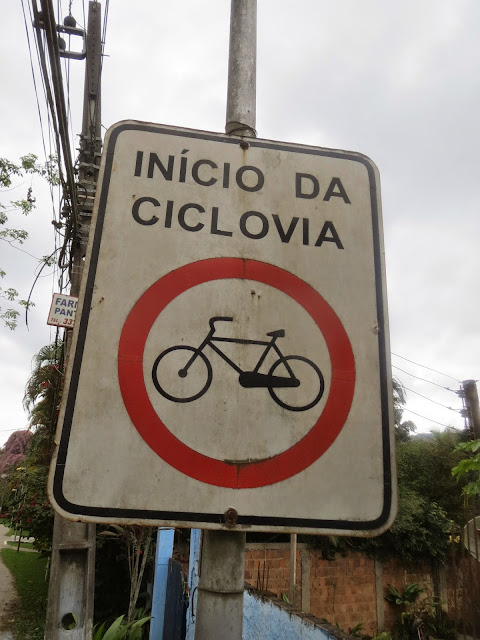 It wasn't a very long path but it got me to the roundabout that led me back into the heart of Paraty - and back to the dreaded Cobblestones 2.0.

It was here I got off the bike, picked it up, and hooked the seat on my right shoulder. It carried me 28 miles on some terrible roads without a flat, and I reasoned the least I could do is carry it the couple of hundred feet through the Boulder Field. 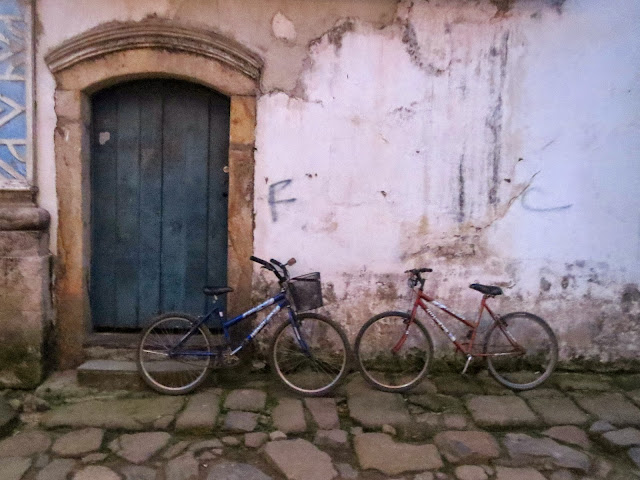 The next day - which was a final victory lap of sorts around Paraty - I got my flat tire.

In the hotel room.

Let me tell you how to inflate a bike tire. When pumping air into the tire, make sure the bike is laying down. Do not pump the tire while the bike is leaning against a table. Holding the pump in both hands, I had a real deer-in-headlights moment as I watched the Bike Friday fall - and the valve tore out from the rim and air whoooooooshed out of hole. I stared at the pump and my brain put together what happened in slow, Beavis and Buttlead-like motion.

I think I just figured something out, Beavis.

I marveled at my stupidity but at least I had an extra (several, actually) tube, which I installed without incident. Still: over 100 miles biked around Paraty, Brazil and the only flat tire I got was in the hotel room. Not bad if you ask me. And my wife enjoyed her time at the Urban Sketching Symposium - and at that night's reception we enjoyed seeing friends like Jessie, Orling and Rita.

My wife also found time to do a little bit more sketching the next morning just before we had to take the bus back to Rio - and eventually fly back home. 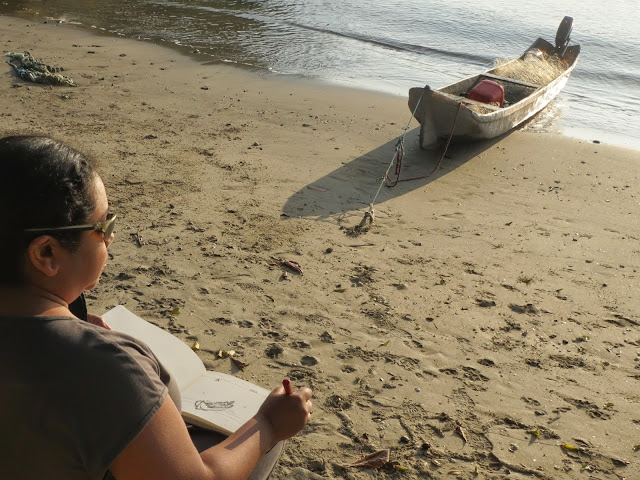 A few days later, when we got home and I unpacked the Bike Friday, I withdrew the souvenir I found on the muddy road, cleaned it off, and looked at it wondering if it had anything to do with my lack of flat tires that day of climbing 3,200 feet in Paraty. Either way, I was lucky enough to go on this trip and thank the urban sketchers for picking an interesting city once again. Thanks for reading and thanks for riding. 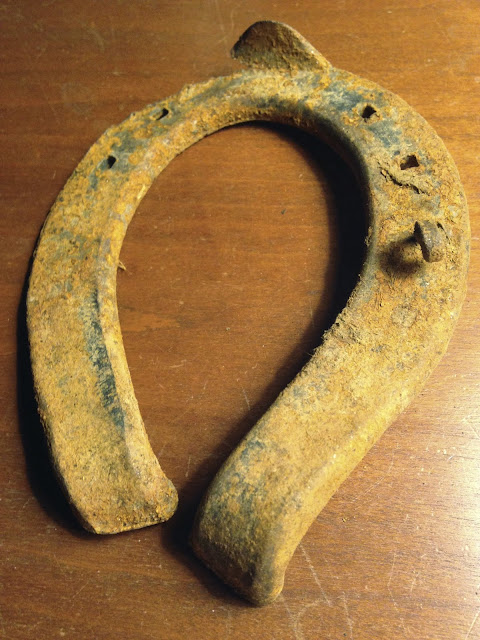