Nine Reasons to Take Part in Bike to Work Week 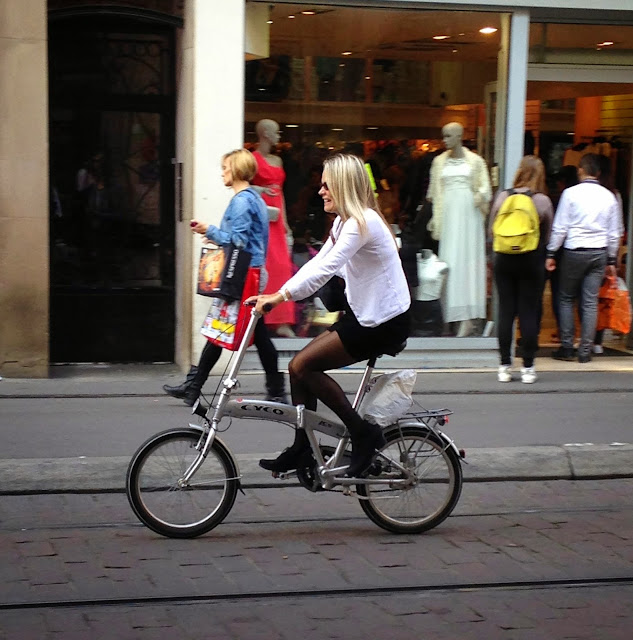 It’s Bike to Work Week 2015. If you’re in Silicon Valley, check out what’s going on with the Silicon Valley Bicycle Coalition or the San Francisco Bicycle Coalition. If you’re in Stamford, Connecticut, befriend People Friendly Stamford on Facebook and read the Stamford Advocate’s Elizabeth Kim’s coverage of Bike to Work Week. If you’re anywhere in between, check with your local bike shop, bike club or bike organization and plan to bike to work this week yourself.

If you’re already doing those things, talk to your car-driving brothers and sisters and remind them of the following reasons to #choosethebike and participate in Bike to Work Week 2015.

9. Energy to run a car is expensive. 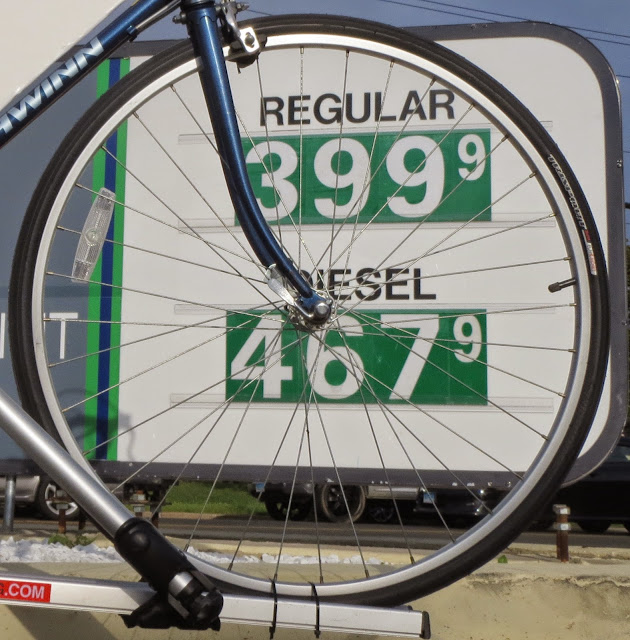 Wherever you live in the U.S. (but especially California, where gas is expensive) it costs a lot per mile to use your car. If gas is $3.39 per gallon and your car gets 25 miles to the gallon, you spend almost $0.14 per mile to drive your car.  Even for short trips, that adds up: last year I pointed out that one simple, four mile round trip bike ride saves more than enough to buy a cookie at my favorite coffee shop in Stamford. 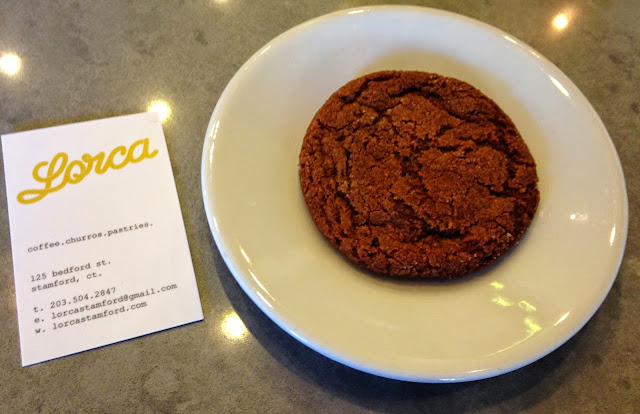 Other than the strength training your right foot gets as it moves back and forth from the accelerator to the brake in traffic, you don’t burn a whole lot of calories when driving. When I lived in rural New Hampshire - where I would drive everywhere - I weighed about thirty pounds more than I do now.

Bicycling changed my waistline for the better and it improved my eating habits. For instance, I’m quite fond of donuts, and I made a deal with myself years ago that I’d only indulge when I would ride a bike to a donut source. The deal stuck, and after a while I wouldn’t crave donuts that much to begin with and would just pedal on by the donut source. Your results may vary, but consider burning calories and not gasoline when going to work.

7. You are not limited by the slow-moving car in front of you. 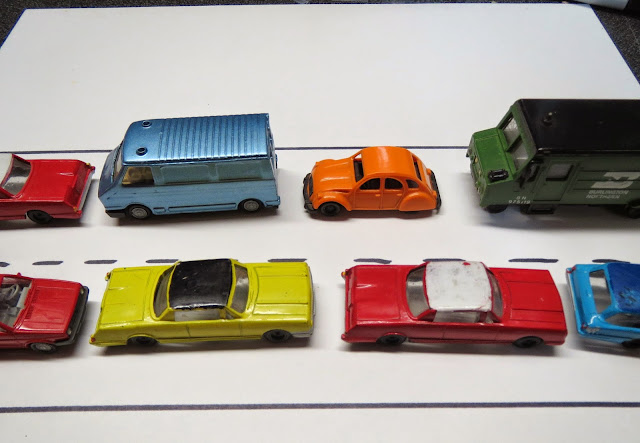 I don’t care how many cylinders your truck has, whether you drive a muscle car or if you do your daily commute in a Tesla. Your car only has as much horsepower and as much top speed as the car in front of you. It’s something manufacturers hide as well as possible - filming commercials of their cars on sweeping, beautiful rides in strangely desolate areas with the familiar disclaimer - professional driver on a closed course - in tiny letters on the bottom of the screen.

But we aren’t professional drivers on a closed course. We’re Amateur Drivers on a Crowded Course (I'll write a book with that title since it sounds catchy) and no matter where you drive, you are hemmed in by the motor vehicles around you.

6. On a bike, you control the terms of your commute. 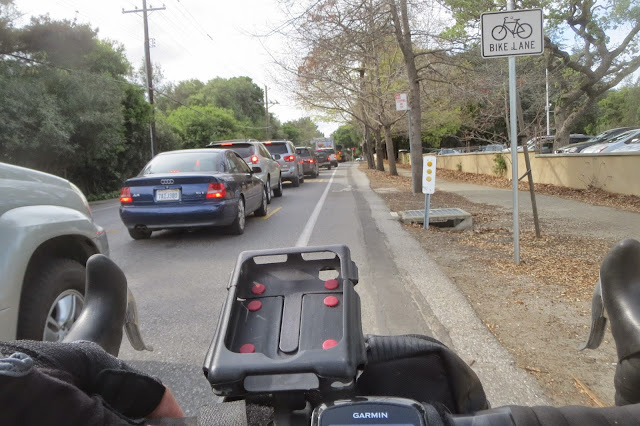 Biking doesn’t just provide exercise, but it allows you to not have your day defined by what others are doing. You can ride to work as fast or as slow as you want. You can take different routes. You can stop anywhere along the way. I could rest my case right there.

5. Every day you don’t drive your car is another day you don’t have to pay a mechanic hundreds of dollars to find and eliminate a mysterious noise. 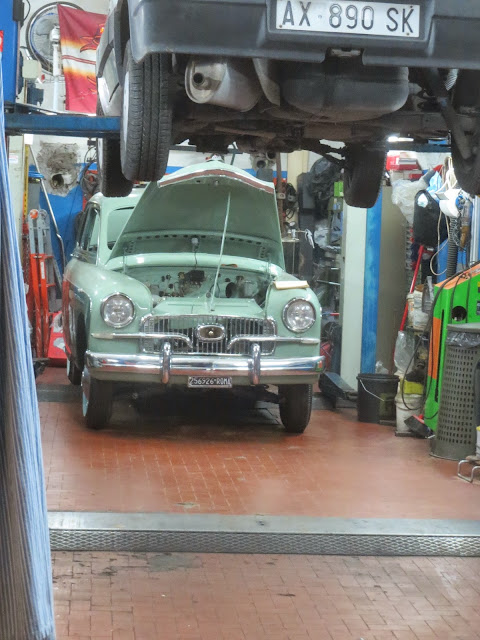 I have a well-documented personal experience with this one. In addition to the running costs, cars are complex things that cost a lot of money to fix - especially if you’re not entirely sure what’s wrong with it other than it is making a sound it isn’t supposed to make. Each day your car is at rest is another day between you and an expensive bill from a mechanic. In other words: if you love your car, drive it less. It - and your wallet - will thank you.

4. Every day you don’t drive your car is another day between you and the next car wash. 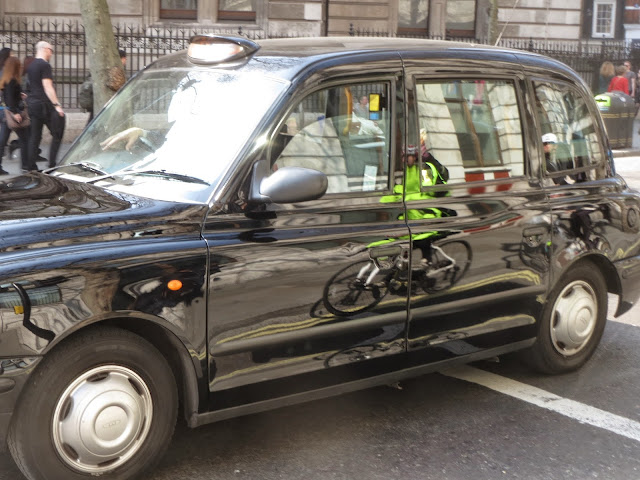 One of the things that struck me biking around Silicon Valley was the number of car washes there are - and how many featured water running from the driveways into the roads. It seems normal for a car wash but the state is also in a drought, and everyone is being asked to cut back on the water they use.

I’m not going to let the car culture off the hook for aiding and abetting the conditions that created the drought in the first place (greenhouse gases, suburbs and their lawns, etc.) but let’s focus on a simple thing: if you’re not using your car, you’re not exposing it to dirt. Biking to work - in addition to being more healthy and more fun - is a tool to deal with the drought since you’ll be washing your car less.

3. It’s easier to communicate with people. 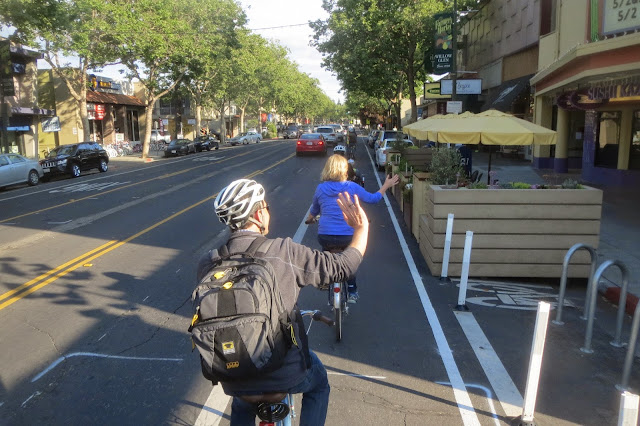 A decade and a half into the 21st century we have no shortage of ways to communicate with each other - I’m sure fifteen new apps that promise as much were funded this morning while I wrote this. But cars are stuck in the early 20th century because the only communications tool each has is…a horn.

To the credit of my fellow human beings: we’ve figured out ways to stretch the little trumpet-shaped button on the steering wheel in ways not intended by the manufacturer. Push it gently but sharply and the person in front of you who took more than four seconds to react to the light changing to green has a gentle reminder to move. This is followed by a sharp, long burst at the following light when the person has displayed this reprehensible behavior a second time.

We also have the two-short-toots technique, usually reserved for seeing someone we know traveling in the opposite direction. This is followed by waving from the enclosed motor vehicle as it passes by - and a look of indignation or confusion from the person driving the car in front of you.

One day in Stamford I was biking west on Broad Street and was turning right onto Bedford Street. On the corner next to the Ferguson Library I recognized Congressman Jim Himes. Since I was on a bike I waved and shouted “Hey, Congressman!” He recognized me and waved back, so I pulled into a space between two parked cars and we talked for a couple of minutes. More recently, the head of makerspace Rippowam Labs recognized me, called my name, and I stopped my bike to talk with him a while.

Think of the conversations you could have had with the last person you addressed with a friendly ‘toot toot’ as you drove by. Think of the friendships and relationships - to say nothing of the spontaneous invites for coffee or treats - that could have moved forward if you were on a bike instead. Instead of being in a capsule with a horn as a voice, you can be on a bike with your own voice and your own smile to send your greeting.

2. Bikes are easier to park. 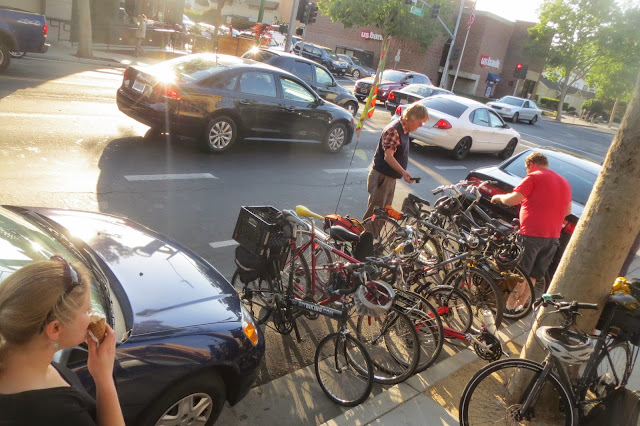 We spend way, way too much time looking for a place to put our motor vehicles when we aren’t using them. Do we have a place in front of the restaurant? No, let’s try the next block. Okay, there’s one. Wait, it’s a loading zone. Okay, how about this. Perfect. A little narrow. Get out on my side, okay? When do they enforce the meter? Should we put a few quarters in just in case? Wait, it’s credit card only?

Cities and businesses need to create and maintain bike parking that is safe, visible and accessible (and cyclists should thank cities and reward businesses that do this) but it is always going to be easier to find a place to stash a bicycle that takes up maybe five square feet than a car that takes up over 100. 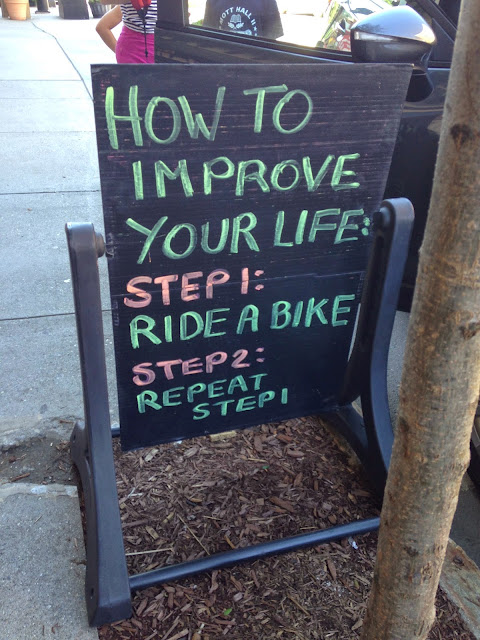 This is everything on this list added together and more. If you want to sit in a car and watch the traffic light in front of you go from red to green and back again before you have a chance to drive through it, you’re free to select that option. But if you #choosethebike, you’ll have a lot more fun. That's all there is to it. Thanks for reading and thanks for riding.