Note: If you are upset, angry, tired or depressed at the result of the election - as I noticed in downtown San Jose last night - please put your energy toward Cranksgiving San Jose - which is a bike-based food drive in San Jose on Sunday. You can register here. 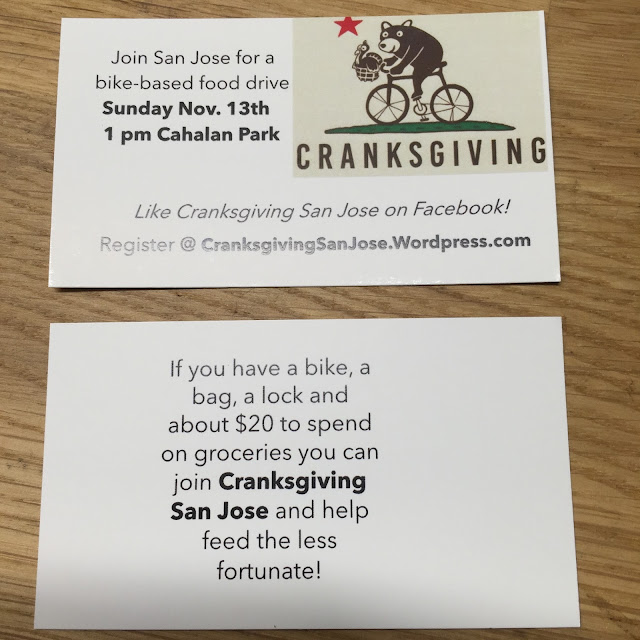 And if you are pleased, euphoric, happy or exhilarated at the result of the election put your energy toward Cranksgiving San Jose on Sunday. You can register here.

Even if the 2016 election ended another way, there is always talk of unity when one wins and the other is defeated. Hunger doesn’t care if there is a ‘D’ or an ‘R’ next to your name. Hopelessness doesn’t either. Let’s come together Sunday, smash expectations and set an example for how people can unite to help the least fortunate of Silicon Valley. Thank you. 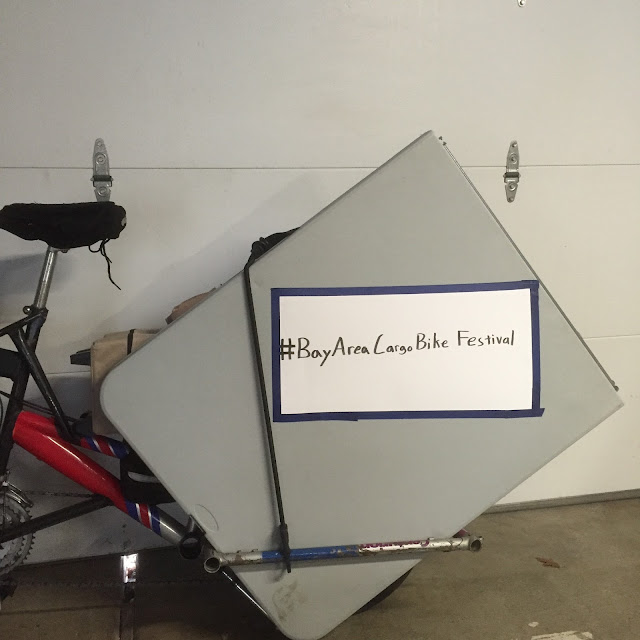 I got to do the Bay Area Cargo Bike Festival last year and loved every minute of it. I met interesting people (one was the owner of Box Bike Collective, who later lent me his excellent signature product which I wrote a two-part review of last year) and I walked away inspired. I wanted to do the same this year but with a twist: I wanted to peddle some of my artwork and promote the bike-based food drive, Cranksgiving San Jose, which is coming up this Sunday Nov. 13th. I arranged to have a tent and table at the Cargo Bike Festival with the hardworking founder of the event, Rene.

There was one problem: I was sick the previous week with one of those colds that tries to waterboard you with your own boogers from the inside.

The entire week I slept little. I ate little. I biked not at all.

I also didn’t make any new welded artworks - and I had set aside the week so I could do so. But I was so tired just pulling my Lincoln Electric MIG welder out would require a spotter. As I closed in on the festival I began to worry I’d have a blank table - or worse, an empty parking spot at the San Jose Armory where my table should be.

But by Saturday I felt like I was on the mend. So much so I was sure I could honor Rene’s request that participants should bike to the festival and not drive. This meant I had to carry - on my homemade cargo bike and on my trailer - my large folding table with metal legs, a 10’ x 10’ pop-up shade, several photographs that were in glass frames (some of which were last seen hanging at Lorca in Stamford during my show in 2014), a Christmas wreath made from the old front wheel of my City Bike and leftover Halloween candy (to my credit: mostly Kit-Kats). I also wanted to give people who visited my table as well as front and rear reflective stickers I wanted to give away to anyone who wanted more visibility for their bikes.

That morning I practiced loading the bike up to see how well I could balance it. With the huge metal table jammed on one side it would absolutely not be balanced but I was pretty sure I could ride the 11.9 miles across the city of San Jose safely. 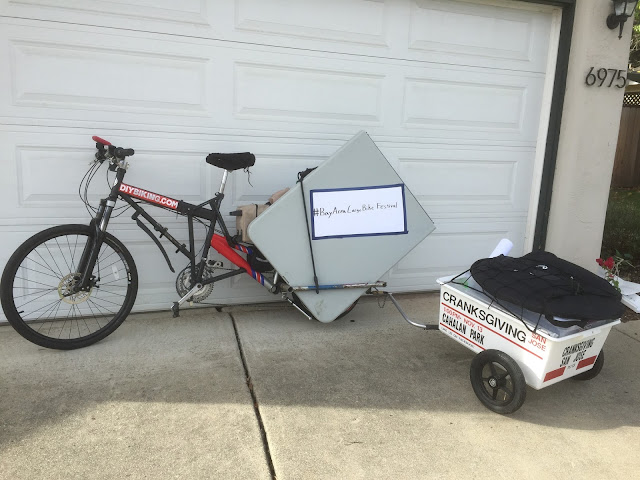 I left an hour and a half before the festival would start to give myself - I hoped - plenty of time to get there. Realizing I was giving my creation (and myself) the ultimate test of strength, I set off.

The bike and trailer moved slowly, but silently. It felt heavier than the 4 x 8 sheet of plywood I carried on the Bikeducken in Connecticut three years earlier. A few miles in I noticed a corner of the table would scrape against the pavement when I’d make left turns.

But I was still biking.

Since I had taken a Claratin before setting off my snot rockets were at a minimum. I could hear birds singing. I could smile back at the women walking their dogs on my route. I had clean air to breathe. I didn’t have to worry about a parking spot. I didn’t have any concerns about fuel. I was getting exercise.

And I was enjoying myself.

I did have some concern over my cargo trailer, which was where I had put my framed photographs. They were cushioned but I never realized how bumpy railroad tracks were - and how many of them crossed my path on the 11.9 mile ride - until that day.

I made it to the festival fifteen minutes before the start. When I applied the brakes I felt happy I had made it though I was disappointed in the unintentional littering I had done on the way up (my oak tag and electrical tape #BayAreaCargoBikeFestival sign had fallen off somewhere along the route). 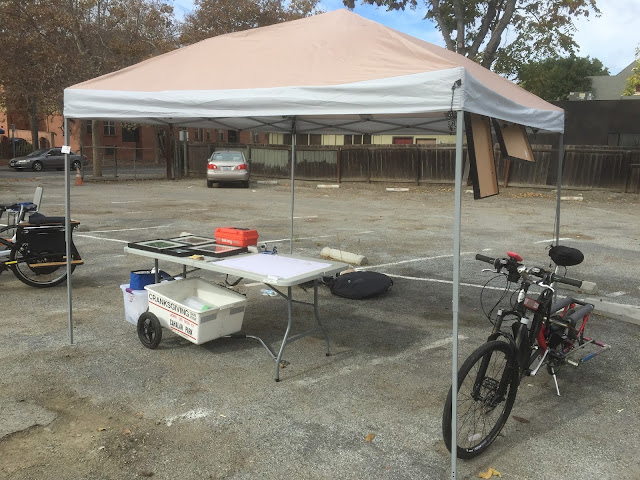 As I unloaded, more people showed up. A guy who was already there who I had never seen before started to help me set up my 10’ x 10’ tent even though I didn’t ask him to. After it was up he left giving me a smile but not saying a word.

Thanks to my cold, I didn’t have enough artwork to fill the table (but all of my photographs made it to the festival unbroken!) However, the day before, I came up with a plan: recalling the 2x2 matrixes I learned about as a research analyst at Kennedy Information - the first job I got when I graduated from college which required me to study the management consulting industry - I put forth the question: What is the strangest/heaviest thing you’ve ever created on a cargo bike? The stranger the item was the higher it would be written on the scale. The heavier it was the further to the right it would be. 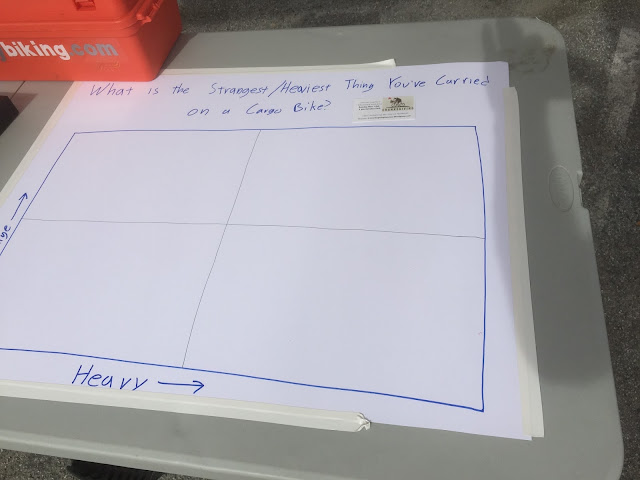 Just like last year I had a great time at the festival meeting fabricators, manufacturers and just fun people who take the #LeaveTheCarTakeTheBicycle concept to the next level. 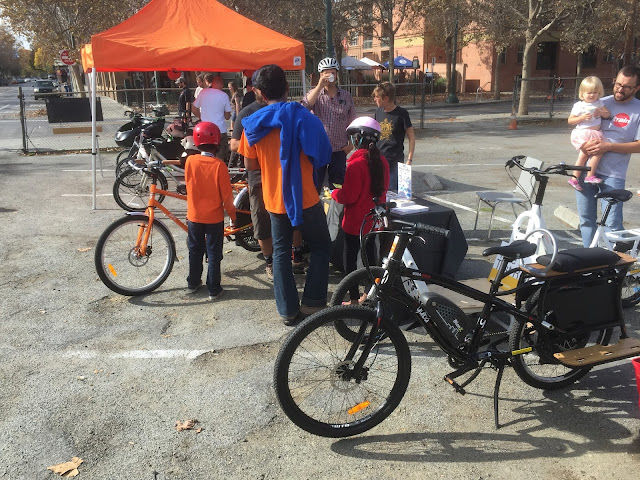 I also discovered that the bike-powered smoothie thing (you can ride a bike hooked up to a blender) is an an actual thing you can buy: Fender Blender Mundo from Rock the Bike. 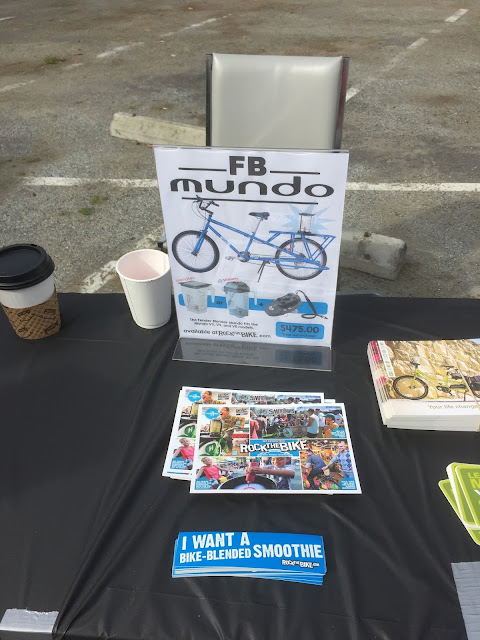 In addition to bike-powered nutrition, I hoped anyone attending would think to themselves that carrying stuff in a small bag from the grocery store or the farmer’s market wouldn’t be a big deal in comparison. 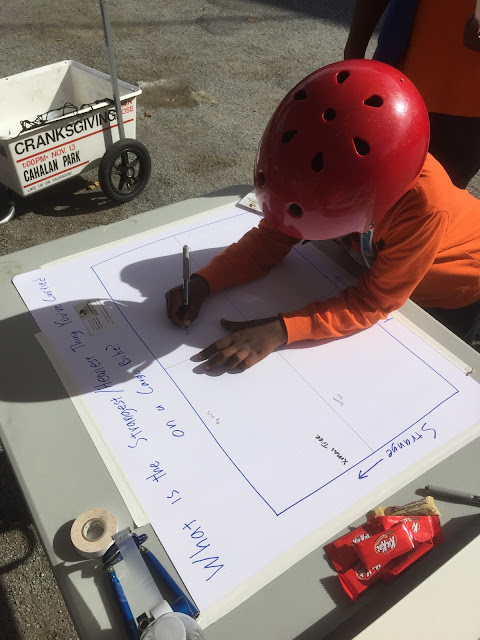 Even though my voice behaved like an ornery lawnmower that wouldn’t start on the first pull, I spoke as often and as loud as I could about Cranksgiving San Jose and answered as many questions as I could about it while guiding people to my 2x2 matrix.

It was truly enjoyable to watch people think about the strangest and heaviest things they’ve carried and write it down on the matrix. A couple of people wrote ‘groceries’ down on the lower left corner. Further up the ‘heavy’ scale was one of my favorites: ‘1 husband and two kids’ - and the woman who wrote that got bonus points for doing the math and showing her work (carrying the ’2’ and everything). 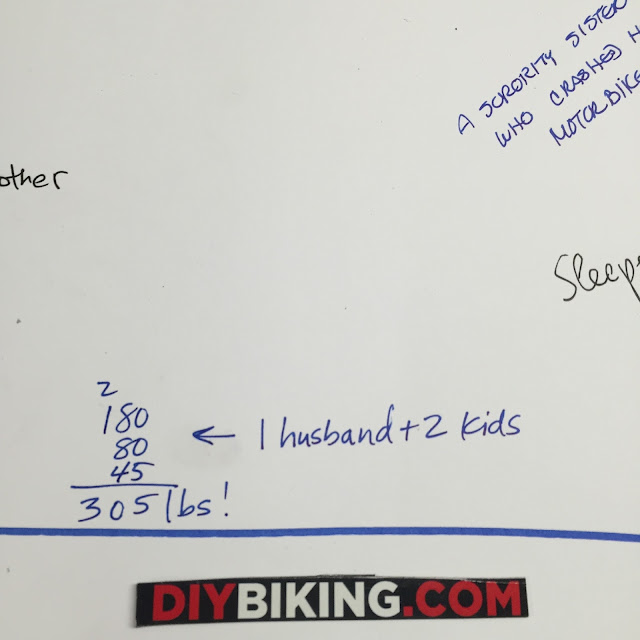 When Cain, the founder of Cowgirl Bike Courier (and another sponsor of Cranksgiving San Jose) showed up, he stared at the matrix for a long time - as though it was one of those hidden image posters and he was trying to find the sailboat. 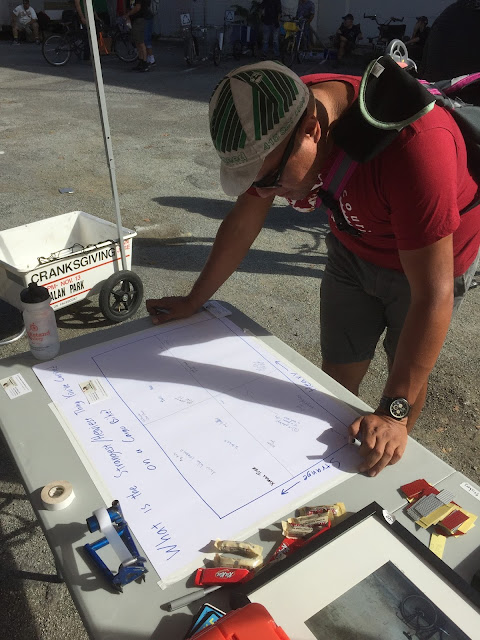 He arrived on his CETMA - a cargo bike I was familiar with before I had a chance to meet its owner. You know when a bike is stolen and a friend wants you to share the picture of it on Facebook? That’s what happened - and I wrote about it last year for the bike-light maker, Blaze. 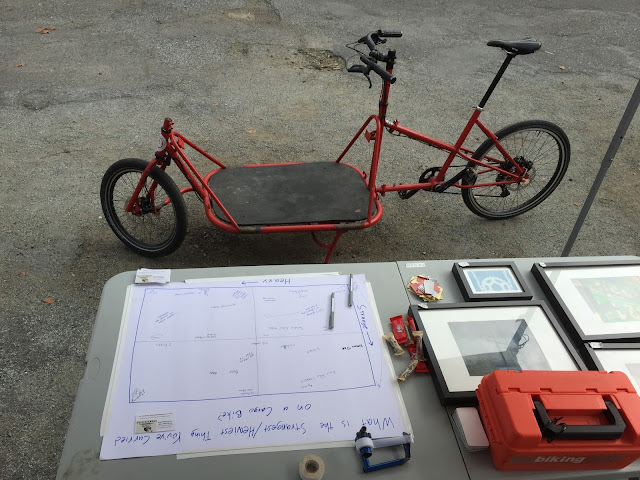 I believed him - but he sent me a picture anyway. 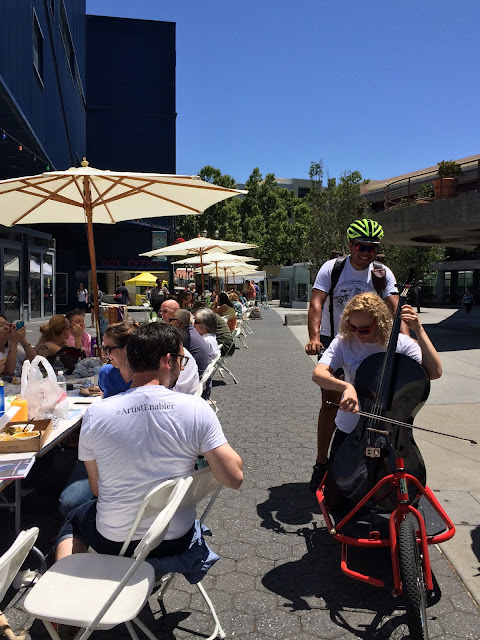 The cellist’s name is Cellista and she is based in downtown San Jose. Check out her music, make sure you follow Cellista on Facebook and come to one of her shows.

Just like last year's Cargo Bike Festival - I was inspired.

Later on, when the event ended, I packed up everything back on my homemade cargo bike - and was thankful for a lamp post to lean it against as I secured my Grapes-of-Wrath-like load. Hoping to brake as little as possible, I pedaled off; working my way through downtown and heading south on Monterrey Boulevard.

And it was there, under a sky that was dark on my right but bright on my left, I saw something on the nearby sidewalk that caught my eye. I did the right thing and applied my brakes and came to a stop so I could pick it up. 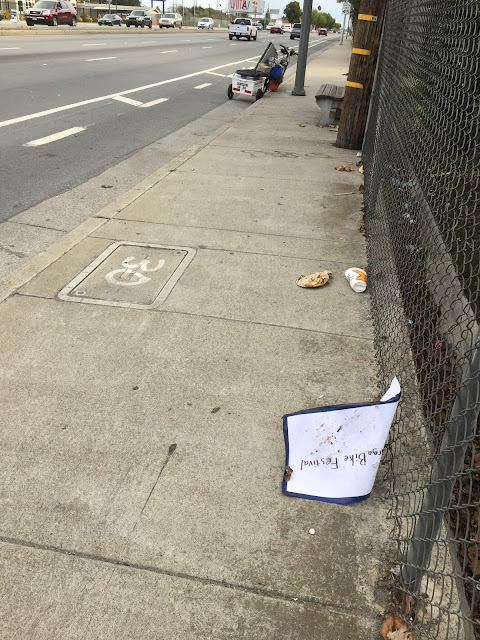 Improbably, the sign I had taped to my bike that morning had been run over several times and, incredibly, skittered all the way over to the southbound lane of Monterrey Boulevard. I got to undo my littering wrong and bring it the rest of the way home. A ride I’ve done in 45 minutes on lighter equipment took an hour and fifteen - but I was still happy in my decision that morning to #LeaveTheCarTakeTheBicycle.

I’ll write about cargo bikes and the matrix more at a later date but for now, I need to leave you - and hopefully leave you inspired to sign up and spread the word on Cranksgiving San Jose. It’s been a divisive election season and a divisive result but it is time for us as cyclists (and human beings) to do something together for a common purpose. Some of you have been carrying a lot on your shoulders this week anyway - so why not add food for someone who needs it? Thanks for reading and thanks for riding. 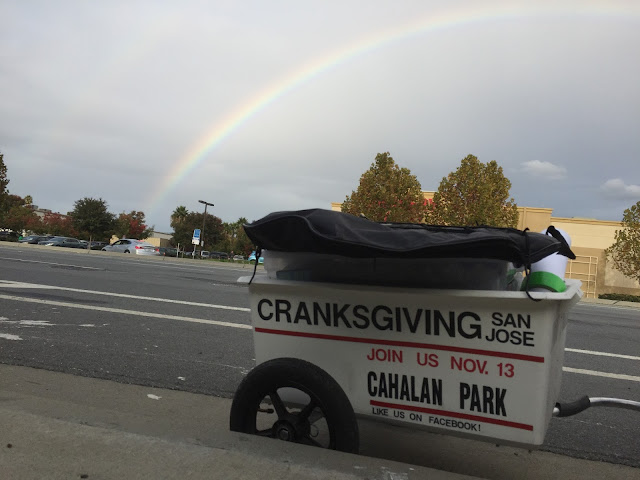 *I’m pretty sure they invented this. Can’t remember the exact person though. Michael Porter? Dominique Mars? It was somebody smart. I remember that much.
Posted by Mike at 2:35 PM