Google bought a lot of property - and I do mean a lot - in downtown San Jose. If you want detailed, quality journalism about what is going on with this city-changing event - read the San Jose Mercury News.

If you want to know what a guy currently wearing faded Pearl Izumi socks with the 'On Your Left' sock on his right foot wants Google to Google before they start building, you've come to the right place. 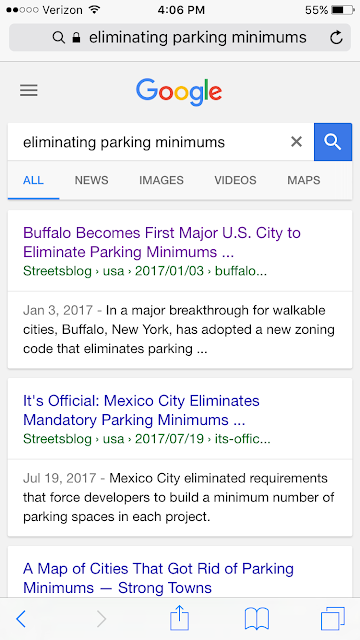 Extra Context: If you want to build something in any given city that is 'x' square feet it must have 'y' number of parking spaces. This is why there is a huge amount of land lying around busy urban areas for unoccupied motor vehicles. Google has the muscle to talk the city into making the best possible use of their space - and space for cities going forward. Besides, their Waymo cars won't need to park (they just must never be found in the bike lane and must follow the 3' law). 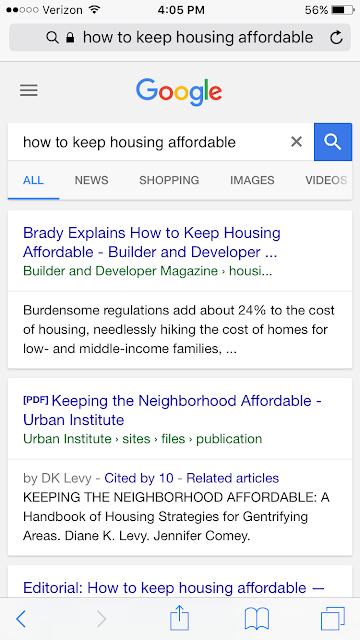 Extra Context:  The Bay Area is going to collapse under its own weight if home prices keep climbing the way they do and thus pushing barbers, teachers, non-profit workers, wait staff, clerks, drivers and everyone else out. Market forces are making it happen but the free market doesn't do anyone any good if massive numbers of people can't participate in it. There are several organizations like Housing Trust Silicon Valley that help people afford a home, but the problem is just massive. I hope Google Googles this and finds the answers - and I hope the city of San Jose, when they meet today at 4pm, avoids trying to look like part 1 of a six-part HBO mini-series of the housing crisis and will say yes to tiny homes for the homeless. 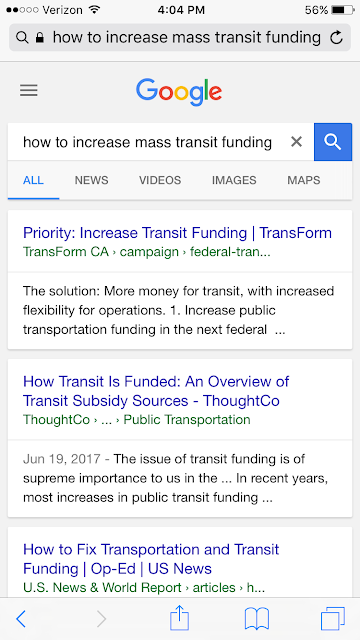 Extra Context: Transit works better than cars to get around if - and only if - a person lives close to transit and needs to get to a place close to transit. As I said in the Bay Area News Group story about Hacking Your Commute, a bicycle combined with mass transit is very powerful (and remains, to this day, one of the things that impressed me the most about California when I first moved here). Right now how we humans get from one place to another is stacked in favor of cars, and a big-ass tech titan headquartered in Mountain View could help change that. 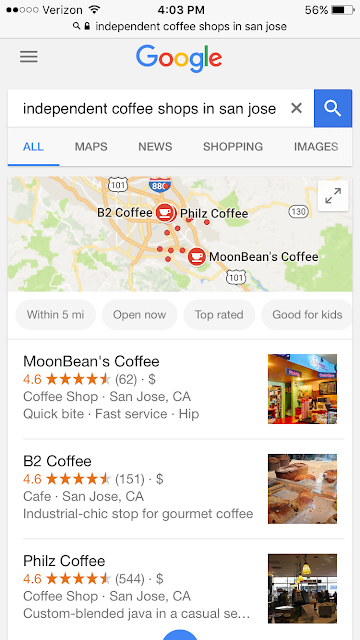 Extra Context: Small coffee shops and restaurants are part of what makes a neighborhood what it is. They are landmarks. They are verbal shortcuts. They also have specialties. If I fancy waffles I go to Hub's Coffee. If I want to meet a friend to talk about Cranksgiving San Jose I go to Chromatic. If I want a mint mojito (or if my sister is in town) I go to Philz. I haven't hit all the little coffee shops in San Jose yet but I like the promise that I know I can do that. That's part of what makes the city what it is. So do a lot of people who work and live here. Let's find ways to make the coffee shops and restaurants stay and flourish. A good way to do that would be to allow workers to have restaurant vouchers instead of a cafeteria so the offices are not islands. 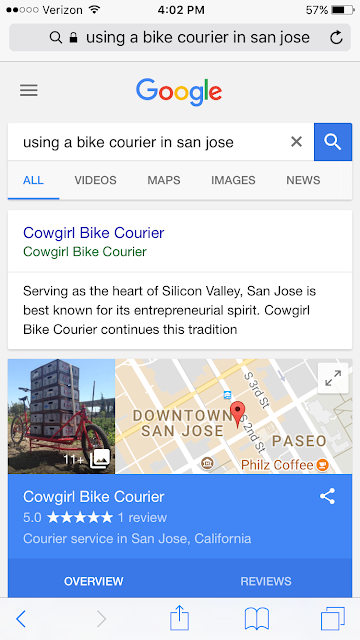 Extra Context: This is an easy one. You're not going to use a bike every time you need to move something - you might use a car or a van. But the more you use a bike to get stuff from one place to another, the less car traffic there will be. And as everyone knows from reading about it San Jose residents are rightfully worried about traffic. The G-Bikes in Mountain View for employees to get around the campus is phase one. Cowgirl Bike Courier can help you start phase two. 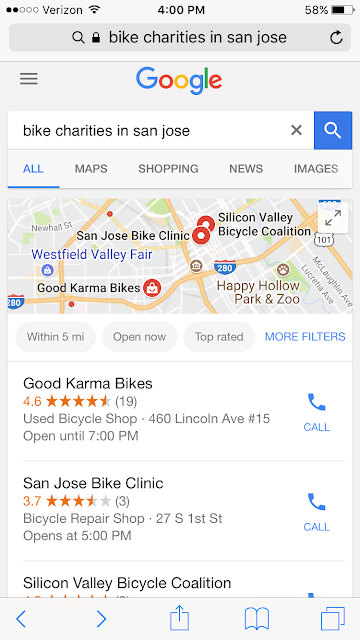 Extra Context: Bikes are too important a tool to be left to weekend use by people who lash them to their Porsche Cayennes. They need to use them to get around - and a lot of people can only count on a bike to get around because they don't own a car. Places like Good Karma Bikes and San Jose Bike Clinic sell good bikes at good prices - and that's the least of what they do and what a bike does. Know who they are. 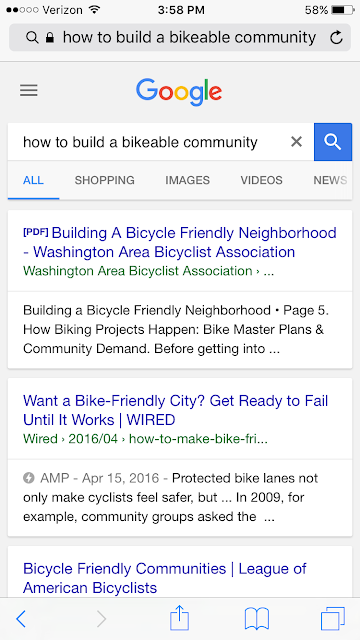 Extra Context: You don't need extra context for this one. 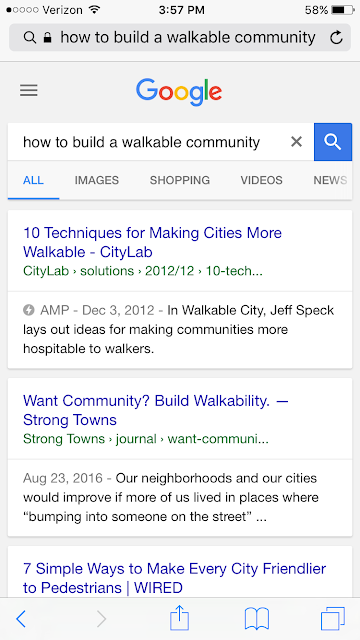 Extra Context: What's a better investment? A two-bedroom, one-bed ranch tucked next to a noisy highway on-ramp or the same house that shares a yard with a quiet, walkable park? 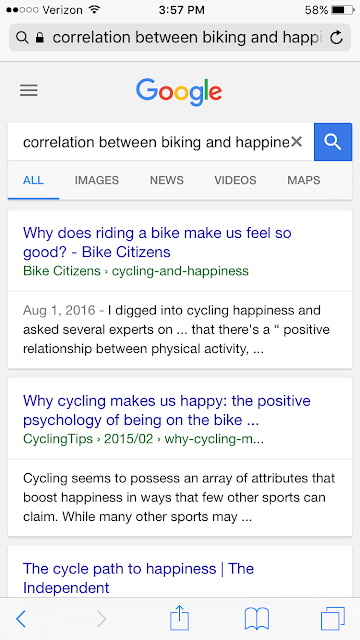 Extra Context: See the rest of this blog and/or rent a Box Bike by DIYBIKING.COM to see what I'm talking about. 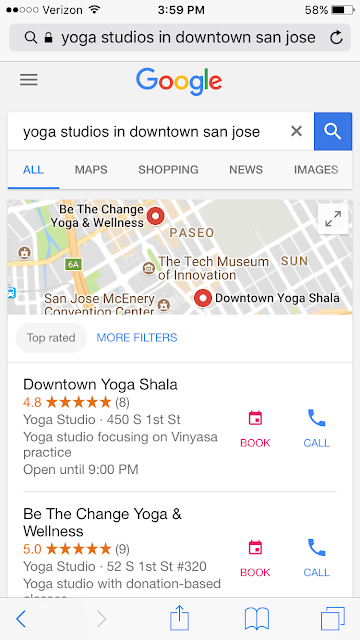 Extra Context: I'm not going to compare Google's upcoming office with the giant bike tire lying on its side in Cupertino. But what I will say two things: small gyms and yoga studios should be packed with employees in the middle of the day (and one of the great yoga instructors from Be the Change Yoga is going to start training new yoga teachers beginning in October, so if any Googlers or non-Googlers need a career change visit her web site).  And the second thing to say is this: if you design everything right, the city is your fitness center.

Thanks for Googling and thanks for riding.