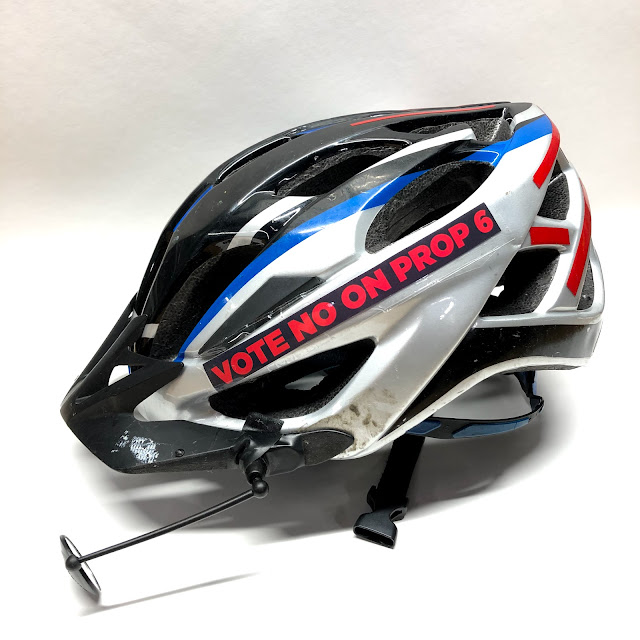 Instead, I'm writing about how important it is for you to vote and defeat Proposition 6. Again. I know, I know - I've been railing against Prop 6 since before it was even a number back in June.

What I did (and I urge you to do this too) was listen to Carl Guardino of the Silicon Valley Leadership Group debate Carl DeMaio on Proposition 6 on KQED Forum. Guardino kept his cool  going over why it is important that Prop 6 fail, while DeMaio spewed a lot of anger - and he gave some to cyclists at least twice when he said the gas tax shouldn't fund bike lanes - and both times he sneered "bike lanes" as though it was a slur.

Later I took a listen to Carl Guardino debate Proposition 6 with Harmeet Dhillon - this time on KALW San Francisco and she dismissively said creating bike infrastructure amounts to 'social engineering.'

That left me baffled. The only 'social engineering' that is taking place is the work done over a period of generations to create a 'cars only' world where streets are unsafe and hard to cross on foot or by bike by design. It's as though California is that hot club everyone wants to get into but you're kept behind the velvet rope if you don't have a 3,000 pound, wallet-draining, air-polluting motor vehicle as your ticket.

The final straw was a Yes on Prop 6 Rally that featured California State Senator Pat Bates, who was talking about how awful a world with slightly fewer drivers would be and had this to say: "We will be forced to walk, ride our bikes or take a once in a while bus that comes our way."


I considered Carl DeMaio, Harmeet Dhillon, and Pat Bates together. This isn't the normal kind of random yell you get from a motorist or an 'angry pass' you may get from a car that had been waiting to overtake you. This is something...else. This is a group of bullies picking on the weaker kid not just for their own enjoyment but as their way to bond as a group.

We are the weaker kid in this scenario.

And it's actually worse than that. To them, we don't exist and nothing we do matters. Our jobs, our families, our friends, how we partake in commerce - none of it matters. If you leave your car at home, you are an unperson.

They don't notice the extra parking spot they get when they drive to work and we ride. They don't see us winning a successful battle with our weight, they don't see us as happier citizens, they don't think it's important for streets to be safe for anyone except drivers of motor vehicles. They literally go crazy when someone suggests that car taxes should only go to car things even though the geometry of both the cities, the streets and the suburbs shows that we don't have room for everyone to have a car. Not only that, but the last time California spent a ton of money on car-only stuff, traffic got worse (Google "405" and "$1 billion" or just click this link).

Today's Republicans are great at exactly two things: making ordinary people feel swell about getting pennies to rub together while being relieved of their dollars - and building an infrastructure that outlasts their time in office. Prop 13 in 1978 did that. Last year's deficit-exploding tax cuts did that. Confirming Brett Kavanaugh did that. And Prop 6 gives them a chance to do it again.

And if Prop 6 passes - if cars are really kept on a pedestal and untouchable with any new taxes going forward - don't think they'll ever invite cyclists into this club. No, no, no: it won't be enough that cities will have to use tweezers to find funding for bike lanes - they won't hesitate to push a tax on bicycles, bike shops, or both. They won't answer your cries of hypocrisy.

They'll just go on ignoring us. Because to them we don't matter.

This is a serious time for the state of California. Other states look to this state to set an example. What kind of example do we want to set?

To do this we have to fight and we have to win. To do that we need to do a couple of things. First off: donate to the No on Prop 6 campaign even if it just a few dollars.

Also, you have a voice and it needs to be heard by people other than other cyclists. We need to get through to people that don't ride. We need them to know how important it is this measure does not pass. One way to do that is to write a Letter to the Editor of your local paper. I wrote one the other day for the San Jose Mercury News. You can read it here.

One of the things I noticed when I first moved to California is how fragmented the cycling culture is out here. We kinda follow one another, have some kind of vague awareness, but you don't often find us in the same room. This is a time we need recumbent riders with the Felt carbon fiber set. The Strava and the Non-Strava. The custom lowriders with the off-the-shelf mountain bikers.

Stand together but spread out and speak.

Your words have weight and the outcome of this election is important. We are nonpersons to the people who are backing Prop 6. Let's show them who we are and educate 39 million Californians on why Prop 6 has to fail and while bicycle commuting in this state has to succeed. Get involved but leave the Twitter trolls alone and write a letter to the editor (links for some CA papers are below). Thanks for reading and thanks for voting.

Links to write Letters to the Editor against Prop 6:

Email ThisBlogThis!Share to TwitterShare to FacebookShare to Pinterest
Labels: California, No on Prop 6, Silicon Valley