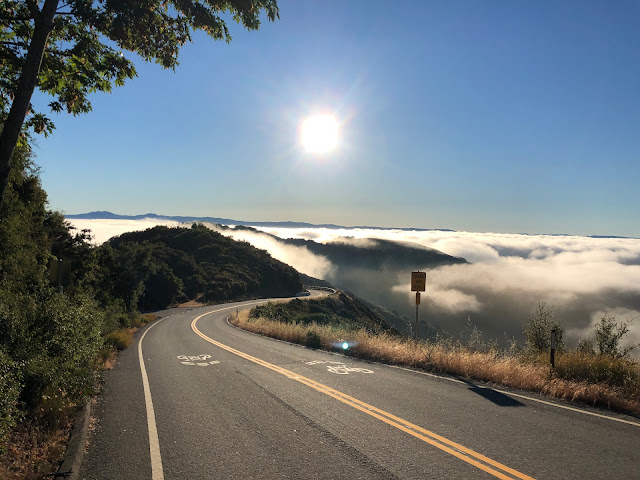 On a normal year, I'd sit with a big crew - Ocean's 11-style - and divvy up tasks for Cranksgiving San Jose.
But this isn't a normal year - last year wasn't, either. In fact, I'm pretty sure I haven't had a normal year since 2012.
Thanks to misinformation, the plague is still very much a part of everyday life - so much so large events are still being cancelled, postponed, or virtual. The Habitat for Humanity Cycle of Hope ride was virtual this year but still great (the in-person version was cancelled due to rain) and the Appled Materials Silicon Valley Turkey Trot will once again be virtual. 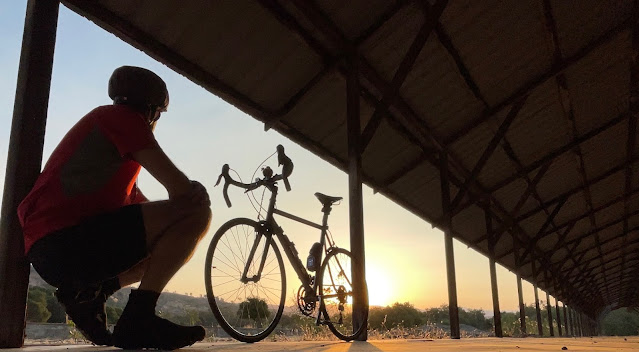 Cranksgiving San Jose this year is going to try to borrow the best of both worlds.
From November 15th until November 24th ride a bike to Spartan Food Pantry at San Jose State University with some items needed by hungry students - check their donation guidelines for what you can bring.
I learned about the Spartan Food Pantry from an article by San Jose Spotlight. Run by SJSU Cares, it found in a recent survey 29% of students at SJSU are food insecure. 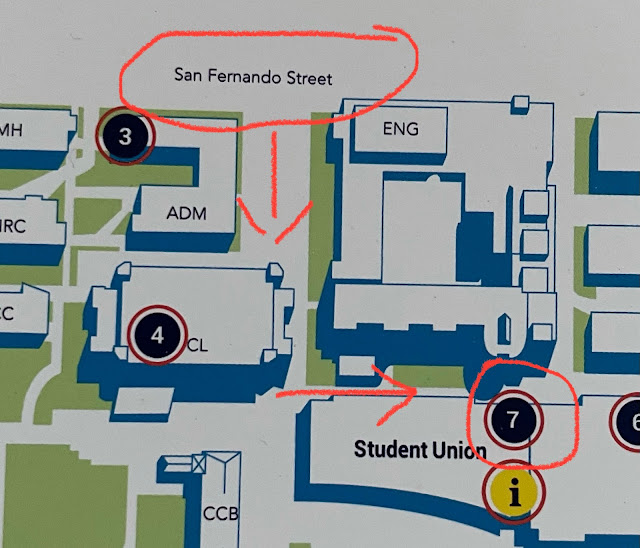 For those of you who live and work near downtown San Jose you can plan on an in-person donation Mondays and Fridays from 10am to 5pm or Tuesdays through Thursday from 10am to 6pm. Follow the map pasted above to find the Spartan Food Pantry, which looks like this when you reach it. 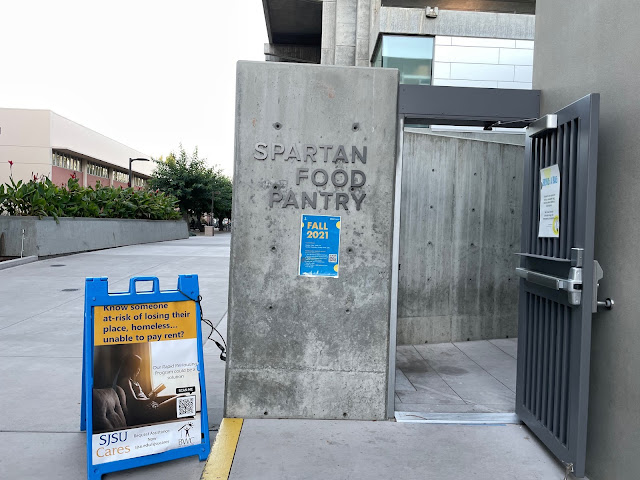 When you drop off your donation, be sure to tell the person behind the desk that "I am donating on behalf of Cranksgiving." and take an appropriate picture of yourself/yourselves using the hashtag #CranksgivingSanJose on social media. And tell your friends. Some will ignore, but others may spontaneously decide to help their fellows and make a donation too. You can also make a financial donation to Spartan Food Pantry here and just write the word 'Cranksgiving' in the Special Instructions textbox.
Cranksgiving San Jose is also running a virtual food drive with Second Harvest Food Bank - which isn't engaging in in-person food drives this year. Whether you can manage a trip to Spartan Food Pantry or not you can join the Cranksgiving San Jose team and make a donation.
I know all of us are tired and all of us are living some level of Personal Hell since the plague started, but just like we insist on hammering the pedals when every instinct you have tells you to dismount, now is the time to make a million little differences. Thanks for reading and thanks for giving.
Posted by Mike at 11:51 AM

Add comment
Load more...
Older Post Home
Subscribe to: Post Comments (Atom)
Donate to Your Favorite Nonprofits! Every day, for 7 days or more, donate some money to a nonprofit that touched your life and ask your friends to do the same. Use the hashtag #MyNonprofits
Crash Test World Premiers on Science Channel January 8 - Crash Test World, a show by Project Explorer founder Jenny Buccos and starring Kari Byron, premiers on Science Channel January 8. Learn more at www.projectexplorer.org/crash-test-world
Donate to Silicon Valley Bicycle Coalition! It takes a lot of work to make great bike infrastructure happen in the Bay Area. Donate to SVBC and become a member!
Cellista's New Album
San Jose-turned-LA artist Cellista's third album, Pariah, is available Oct. 1st - visit Cellista.net or find her on Bandcamp at cellista.bandcamp.com