The arrival of the decision I made to build my own mountain bike came in part from My Cousin, mostly in the aftermath of a recent ride he and I took together at Bluff Point State Park here in Connecticut.

A photograph in the header above shows one of my bikes: a 2009 Dahon Matrix, which is a folding bike with 26" wheels In the header it has a pair of MTB wheels, but the picture below shows it with the thinner ones it came with: 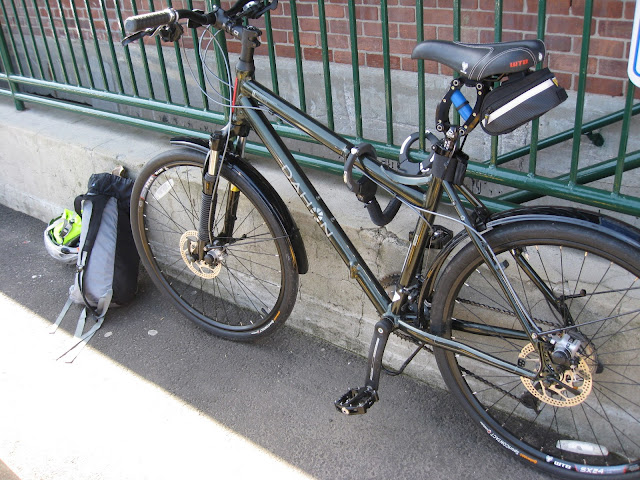 I bought it mostly to get around the Metro North commuter train restrictions which prohibit anyone from bringing bikes onto the train during peak hours (which is most of the useable workday). If you read the regulations, it becomes clear a folding bike is to Metro North what a brown paper bag is to public beer consumption.

The Matrix isn't the smallest folding bike in the world and far from the lightest, but it does its job well. I added the fenders, pedals, and suspension seatpost, and thought I could use it as a mountain bike by swapping out the skinny tires for fatter ones.

This is probably good for about 90% of mountain biking, but not when I'm trying to keep up with My Cousin. He's five years younger than me, and I have vague memories of riding with him all over Mystic when we were kids and he'd say those three little words which always meant the world to me: "Mike! Wait UP!!!"

At some unrecorded moment, he started growing up and became an incredible cyclist. He grew taller than me and stronger. When I'd come to family reunions in Mystic he'd always want me to join him at Bluff Point State Park; he on his full suspension whatever-it-was and me on my zero-suspension Diamondback I had gotten as a high school graduation gift. I'd finish each and every ride in his dust and likely with fewer fillings than I had when the ride started. As the years went on, it got harder and harder to keep up with him. When I brought the Matrix (tricked out with the big tires) to Bluff Point on a recent trip, I only did slightly better, but it was like racing a box truck on a rally circuit. It would do okay on singletrack, but My Cousin favored trails he referred to as "rock gardens" and "technical." 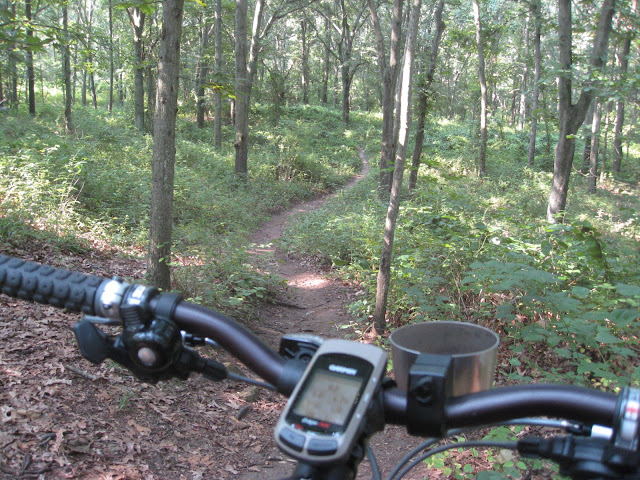 When I had uploaded the photo above (after a Bluff Point trip over the summer) I began to fully understand the need for a good mountain bike. I mean, look: there's a cup holder attached to the handlebars. A cup holder. When I'd bring the Dahon to visit my in-laws in New Jersey, the cup holder was useful to bring coffee back from Dunkin' Donuts. But it has no place on the trails of Bluff Point. The Matrix had simply grown too utilitarian for its own good. I was also worried I'd damage the folding mechanism (the hidden hinges Dahon made for the Matrix are just brilliant) so I'd ride it as gingerly as I could, which wasn't easy when riding with My Cousin, who is now far removed from his "Mike! Wait UP!!" stage and just a machine on any trail he and I have ever taken together.

I admit, however, he did say those three little words on a trip to Bluff Point that day. I was just ahead of him on a rather uninteresting section of the trail and he said: "Mike, wait up. I want to see if I can ride over that log back there." I could only look back at him in awe. 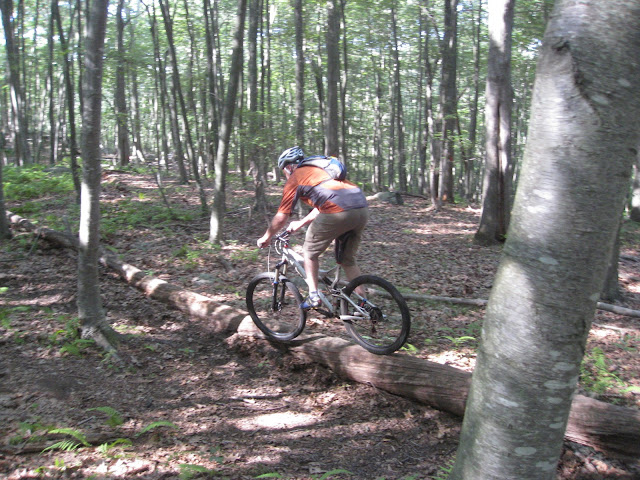 Wanting to save the Dahon for its intended purposes (which was still many) and wanting to keep up with My Cousin on rides helped me decide I should build a mountain bike. Up to this point, I had only learned about bikes by tearing them apart, and My Cousin (a very enthusiastic cyclist but far from a snob) assured me I'd enjoy the experience of building a bike from the ground up. He's been right. I have enjoyed the experience of building a bike. I'm positive the outcome of the black frame on my inaugural post won't make me a better cyclist than him, but I'm hoping I'll be able to keep up with him more and crash less when we go on rides together.

But building a mountain bike isn't the easiest thing to do. More on this in another post.