How To Ride In New England Winter Months (outdoors!)

It used to be that if you lived in New England and you wanted to ride when there is snow on the ground, you'd plop the road bike on rollers and pedal furiously in front of the Mythbusters' Pirate Special on DVD until you either fell off or rolled off the front and crashed into the television.

Over a year ago I bought a special kit made by Ktrak Cycles as a birthday present to myself: it consists of a rear track and a front ski that can be mounted on almost any bike with 26" wheels. It may have been an impulse buy I should have ignored but I didn't, and it wasn't until recently I had a real chance to use it.

What happened was I was driving through Stamford and found this sticking out of a green recycling bin: yes, it is a Specialized frame, and this is exactly how it looked when I pulled it out of the bin and stuck it in my car: 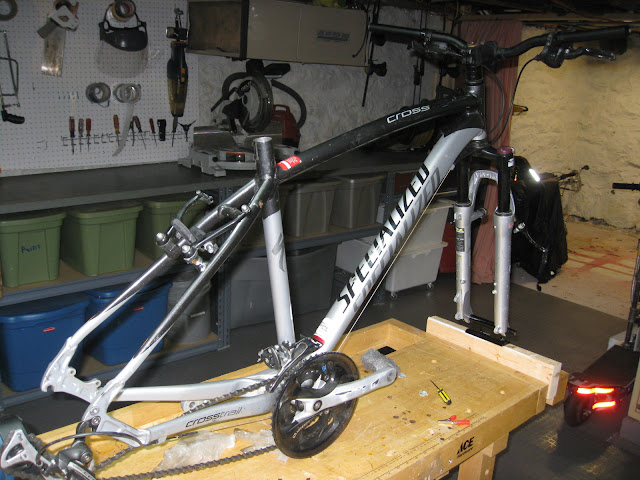 Pay no attention to the $40 garage sale workbench it's sitting on: the frame was a real find. The chain was rather gooey and it needed grips, pedals, a seat, seatpost and a rear brake but I had all those things. The first thing I did was remove the caliper brakes off the front and back: the Ktrak kit calls for a rear disc brake, and the frame had mounting points for that on the back. 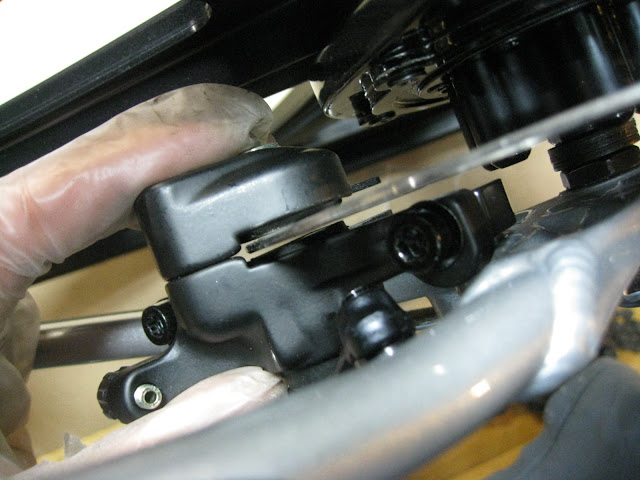 I had a Nashbar mechanical disc brake kit on a shelf so I set to work mounting it to the frame. It turned out to be a real task, because no matter what I did, one of the brake pads kept rubbing against the disc on the Ktrak wheel. I don't know if it was the design of the frame or my own impatience installing it, but a little metal tab on the replaceable brake pad kept getting caught on something and wouldn't mount flush. 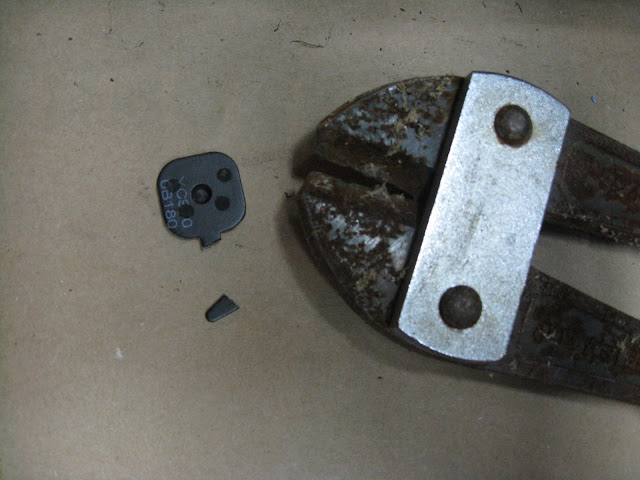 Bike shops don't usually have bolt cutters around, but mine does. Problem solved! 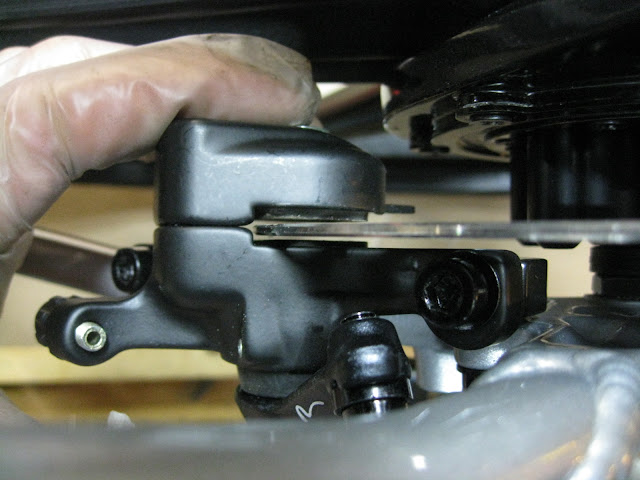 Now it was time to clean the chain, which had the properties of a giant piece of pipe cleaner (it could literally be posed in different positions).

I follow a three-step process when I clean a chain that would probably be better off being thrown away. First, remove the chain and soak it in degreaser. 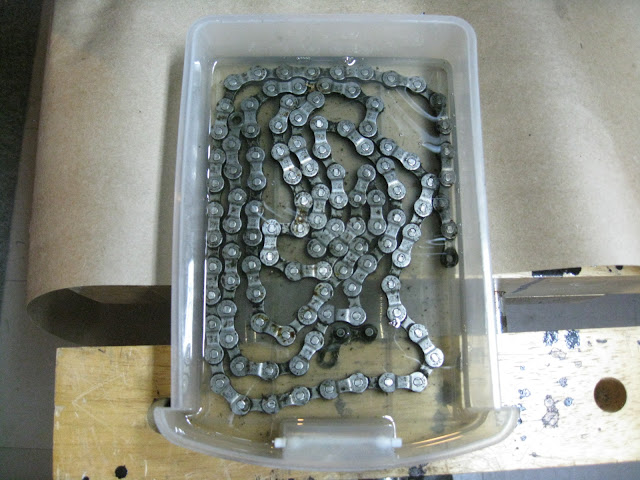 Step 2: shake the chain about like you are panning for gold... 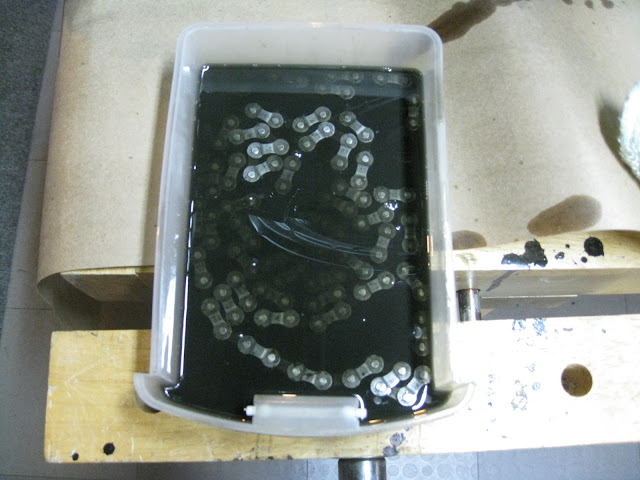 Step 3: Get your salad spinner and spin the chain until it is clean (For the life of me, I don't know why the Salad Spinner people don't sell their product in every bike store in America. I really don't). 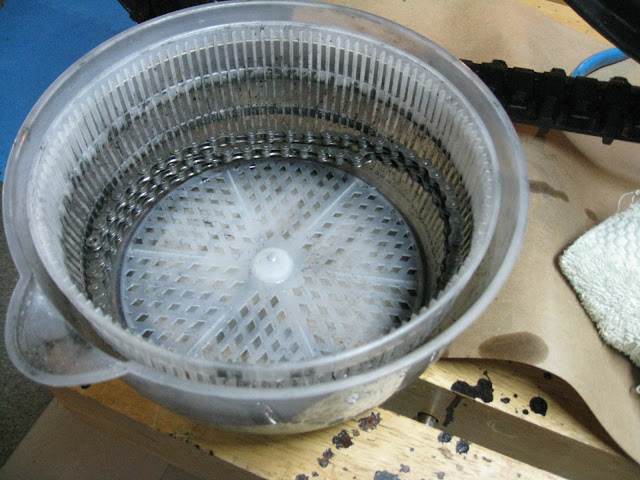 I put the chain back on and installed the pedals, seatpost, seat and handlegrips I had lying around. Once I put the kit on the bike (it mounts like a normal wheel would) and fastened it properly to the seatpost, I had this: 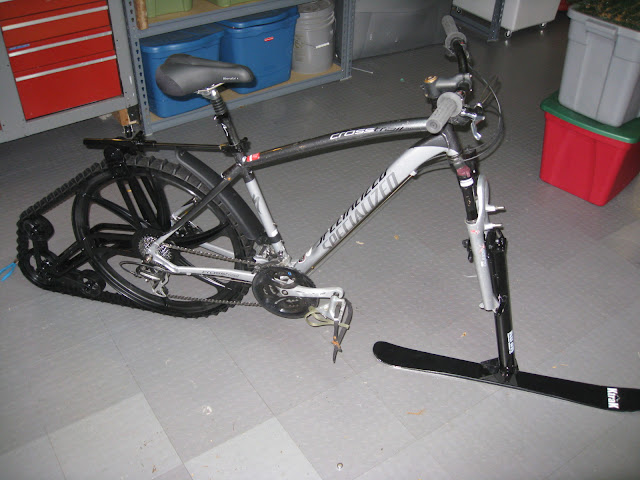 In anticipation of using this thing only with winter boots, I adjusted the pedals as such so I could fit the boots through the toe clips.

I rode this on Mirror Lake during a trip to the Adirondacks (the picture is in the header). I couldn't go far without becoming exhausted, but while I was riding tourists would actually come out of the lakeside restaurants to gawk.

Given the miserable winter Connecticut and other states have suffered in 2010-2011, I found that I could be one of the fastest moving men in Stamford in the hours between after the snow falls and before the plow comes. 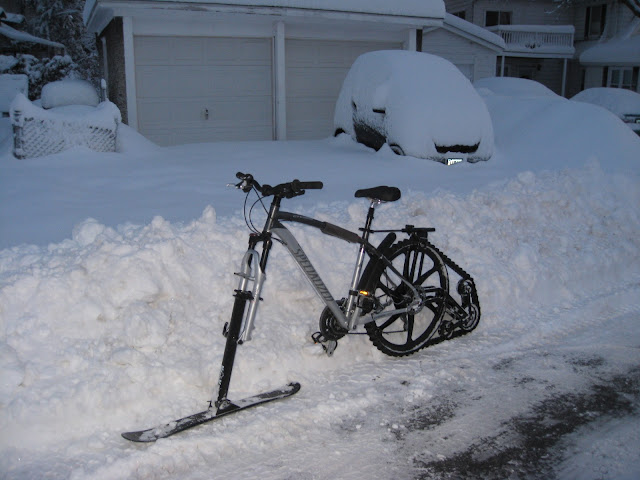 In short, a Ktrak kit and a free Specialized frame added together gives you something smarter than a Smart Car in this kind of weather.