In Manhattan for the Metro North Bike Rack Test 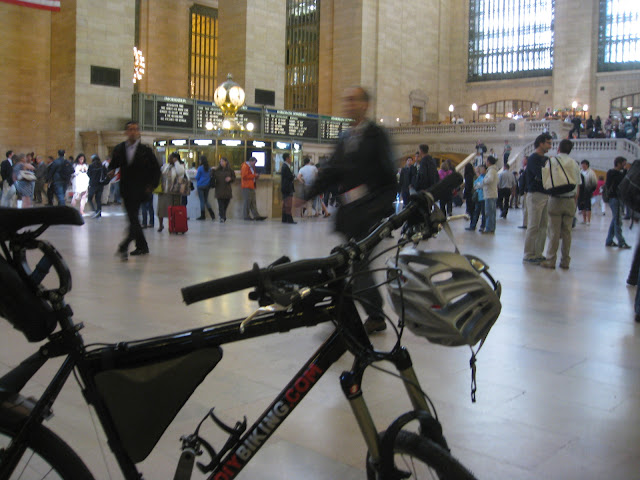 Since I had a day off work today, I decided to head to Manhattan and test prototype Metro North M8 railcar bike racks.

Stay with me: this is a lot more interesting than it sounds.

You see, cyclists along the Metro North lines have been asking for bike racks on trains before there were any tracks. Now that racks are set to be installed in some of the new M8 railcars, the east coast will have finally caught up to the west.

The state DOT and Metro North Railroad narrowed the choices down to two styles. They had a two-hour window to test them yesterday in New Haven but it wasn't on my day off. Appropriately, some of the folks who have advocated for bike racks on trains the longest had their chance to try them then. But if I wanted to try out the racks, I'd have to head into Grand Central Terminal.

I briefly thought about throwing the designers of the things off-center by bringing the recumbent, but I realize it wouldn't be the most common bike that would get to go on these racks and I should treat it like a serious test. So I brought my homemade mountain bike, which I had outfitted this morning with its “street package” - two 1.5 inch tires on their own rims. When I brought it onto the 10:14 express train, I did what many cyclists do and wedged it in the vestibule. 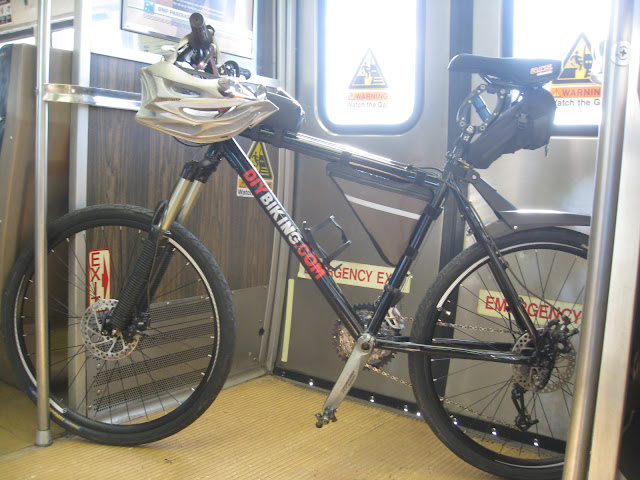 This isn't ideal, and the new bike racks were hopefully going to change this nonsense.

My plan was to get to the city, check out the racks, and head straight back so I could join my wife for lunch. Partway down I realized how silly it seemed to head all the way from Stamford to New York City just to hang my bike on a couple of hooks, so I decided to get a short ride out of it by getting off the train at Harlem 125th street. This meant I could ride 82 blocks south to get to Grand Central Terminal on a very beautiful day. 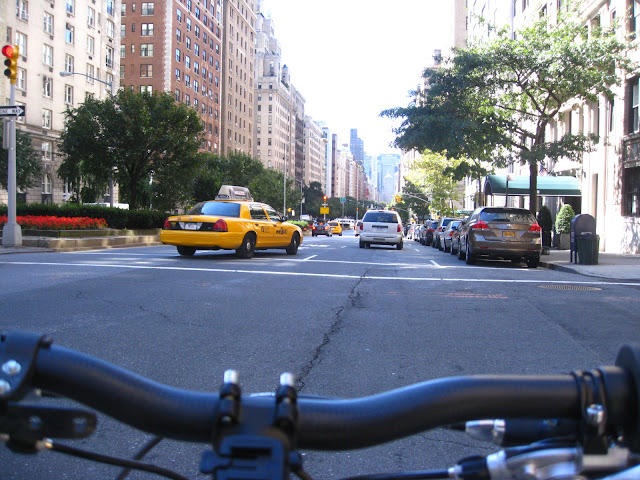 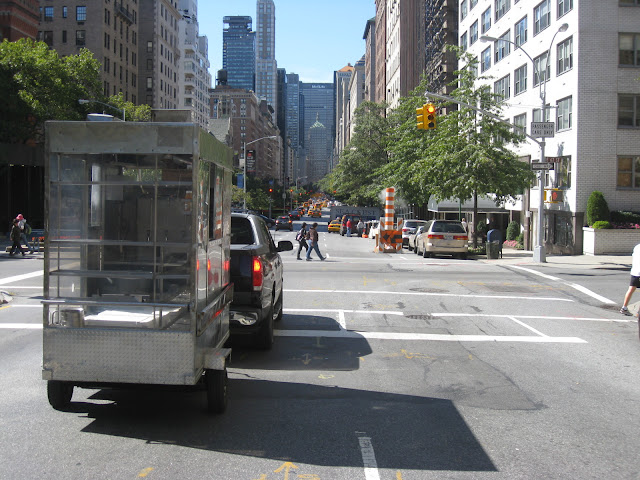 I had one snag: my mountain bike does not appreciate the street wheels. I just sense it would prefer the trails of Mianus River Park or Bluff Point State Park than city streets. For reasons I haven't figured out yet, I kept overshifting and twice on the way down the chain would jam. My homemade mountain bike was behaving like a child who didn't like the shoes he was being forced to wear. 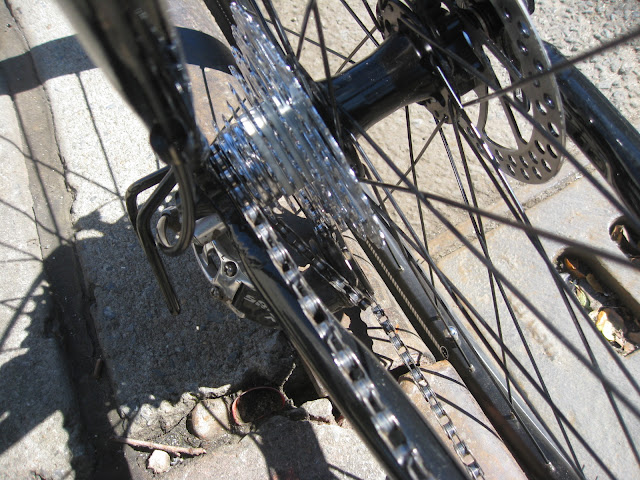 It was still a quick fix, and since I had just cleaned the chain the day before it wasn't too messy. After taking care not to shift into too high a gear, I made it to GCT and had no trouble at all finding the track where the M8 railcar was parked. A friendly Metro North employee greeted me before pointing out where I needed to board in order to test racks 'A' and 'B.' He also asked if I'd take a survey when I was done and I agreed. 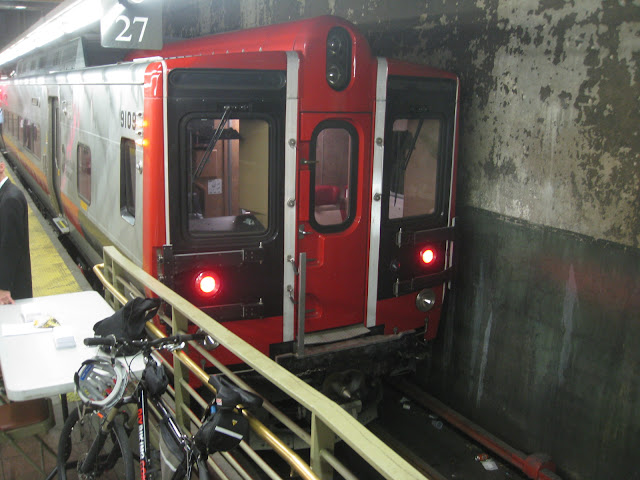 I headed into the first car and was shown Rack 'B' which came with detailed instructions. 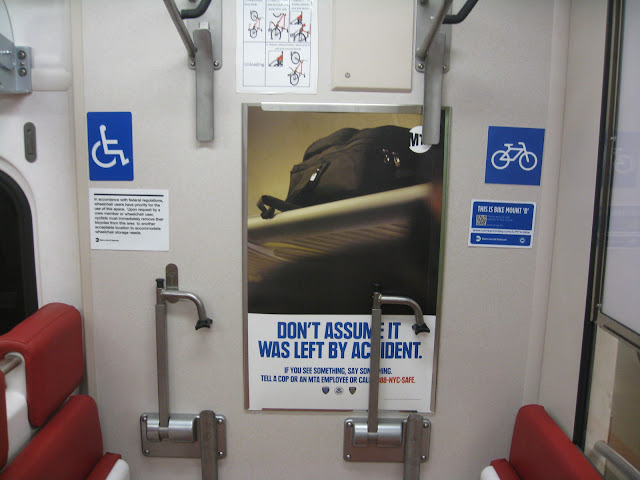 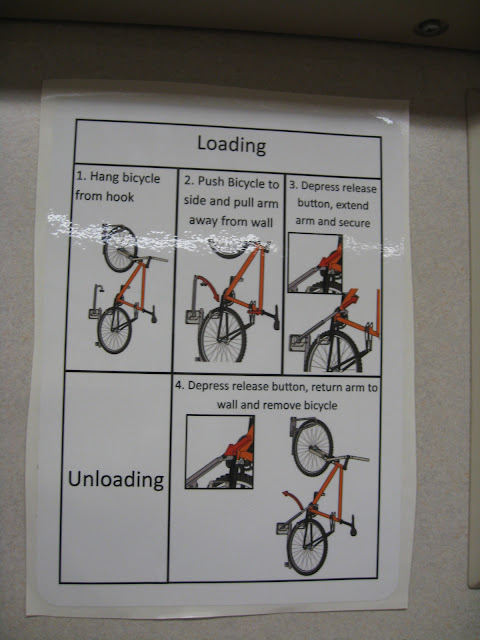 With MTA employees and other onlookers watching, I hooked up the front wheel and pulled the spring loaded arm into place over the bottom bracket. Just like that, the bike was locked firmly into place. I found the experience easy and I liked it. 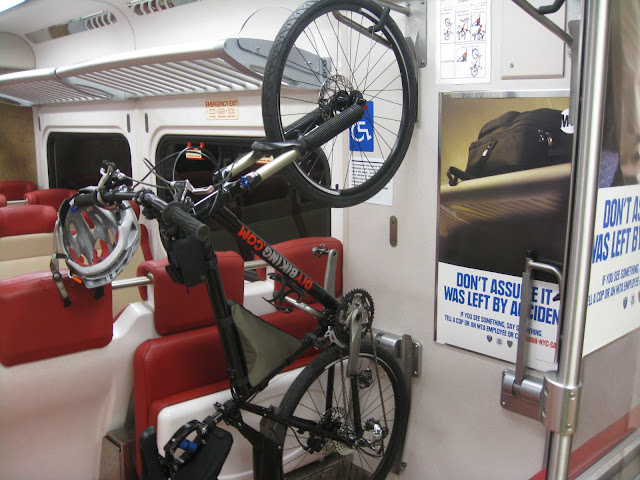 Stifle that yawn. That becomes important in a moment.

After talking with some of the Metro North team and other testers for a few minutes, I took the bike down (it was just as easy an experience as putting it up) and headed to the next car where I was shown Rack 'A' which also came with detailed instructions. 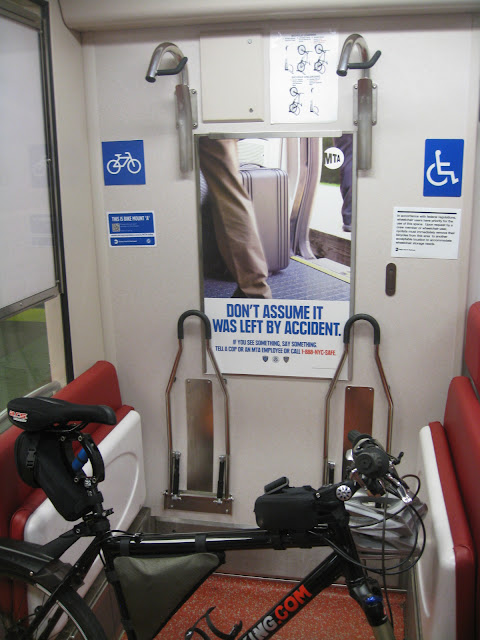 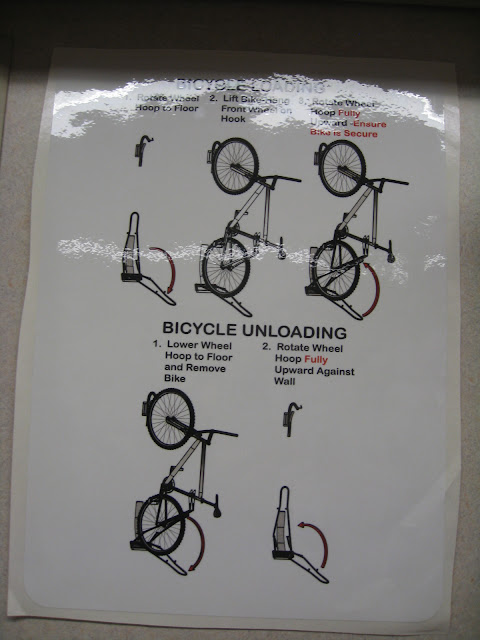 Instead of starting by hanging your bike from the hook, the first step, as you can see, is to pull a steel hoop away from the wall and put it near the floor. Then you hang the bike and pull the hoop up over the rear wheel. That's it. 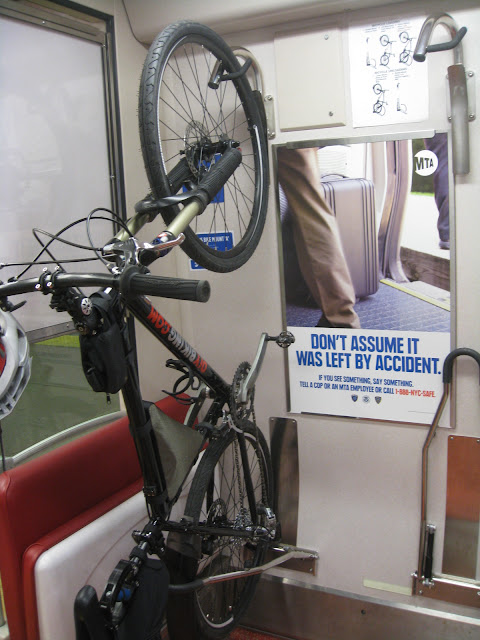 Some of the people there really wanted my opinion on which one I liked better. After so many years of putting the bike in the vestibule I would have been grateful for one of those $0.99 hooks that I use in my basement. I asked whether they've had a chance to test bikes with rear racks on 'A' and they assured me the hoop goes right over it. One of the people there suggested the 'serious riders' preferred rack 'B' since they often had panniers bags to think about.

After chatting with the others for a few more minutes (and briefly talking bikes with the project manager who was there) I decided to give Rack 'B' another shot. By the time I walked my bike there, an attractive cyclist had just finished hanging her bike to Rack 'B' and was looking at it the way a museum goer might gaze at a piece of abstract art. I patiently waited, but a Metro North employee spotted me and beckoned me forward. Just as before, I easily accomplished step one and hung my bike to the rack. 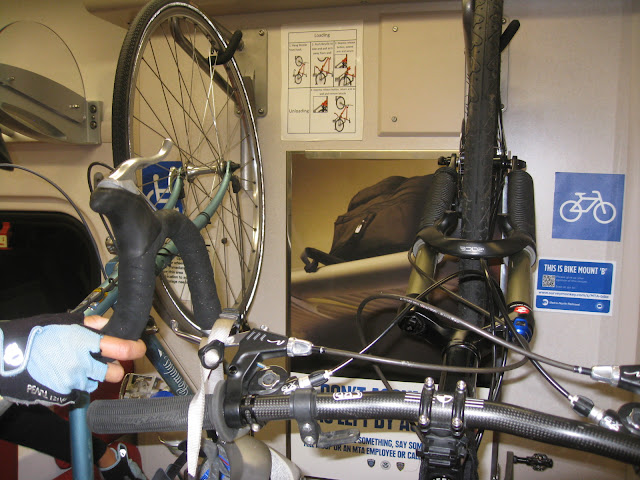 However, because the Attractive Cyclist's Bike was there, hooking up the spring-loaded clamp was more difficult. I had to wedge my torso between the handlebars of both bikes to reach in to grab the clamp. It was then that I realized I liked Rack 'A' better. You can push the hoop to the floor and then pull it back up by using your foot and not have to reach your arm in. That's important because I imagine most of the people using these racks are going to be on their way to work and wouldn't particularly enjoy scuffing up their nice shirts and blouses by having to reach between two bikes to grab a clamp.

I'll take whatever racks we get, but I'm Team Rack 'A.'

After I filled out the survey I took a sheet of paper that showed what trains would have the new racks. At the moment it is, not surprisingly, fewer trains than a lot of people would like. But it is a start. 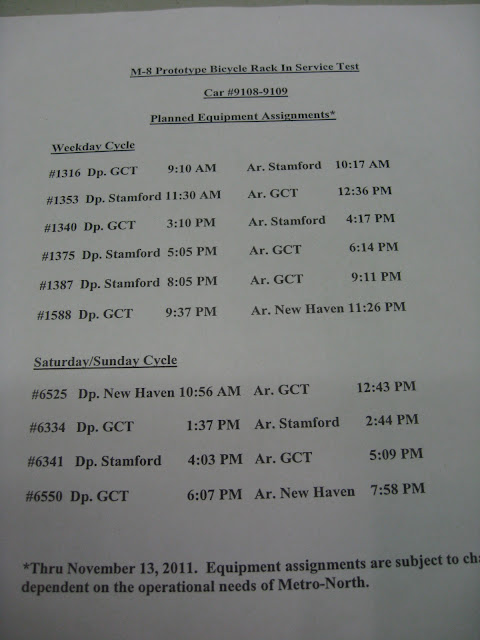 I returned to the main hall and found the 12:07 express train to Stamford on track 26. Just as before, I boarded the train and wedged the bike in the vestibule before settling down for the 47 minute trip back to Stamford.

On the way back, we stopped at Harlem 125th street, and the doors opened on the left side of the train – which meant my bike was blocking the passengers from boarding. I quickly jumped out of my seat, grabbed the bike, and rapidly (but sheepishly) pulled it out of the way so they could board.

Thanks for letting us test the new racks, Metro North. No matter whether they are 'A' or 'B' they are so desperately needed. 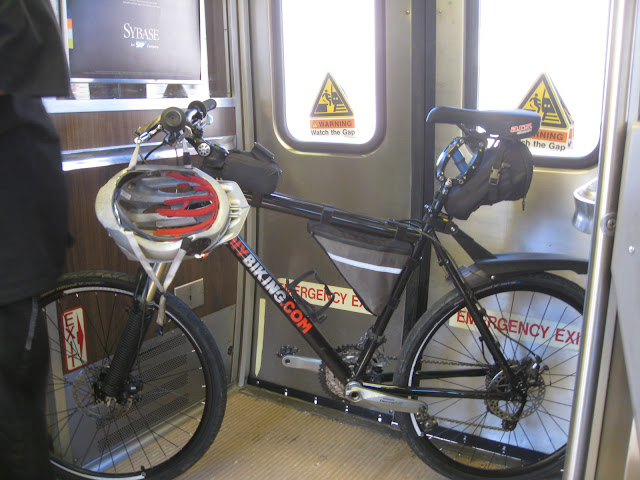