Biking In Boston (or, Biking? In Boston?) 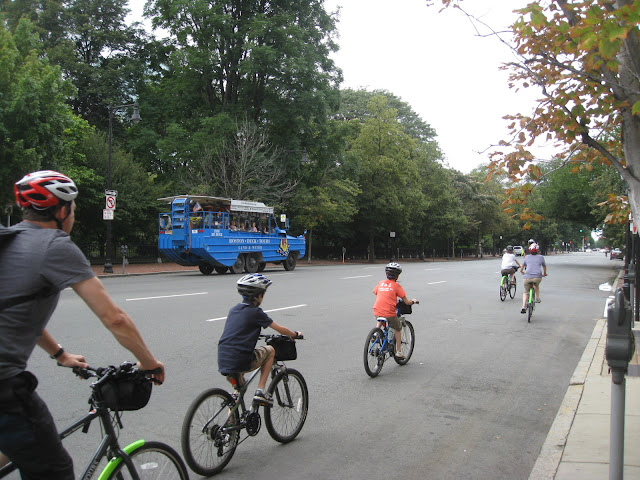 So I got to go to Boston for a weekend on short notice, which meant I could go to one of the most legendary bike-unfriendly cities in the Northeast.

I had never biked in Boston before. About ten years ago, when I lived up in New Hampshire I drove my car to a meeting in Boston and was profoundly horrified at the experience. As a result, on each subsequent trip I'd just drive to the Alewife T station and head into the city that way. When I moved to Stamford in 2004 I more or less forgot about Boston (Sorry, Bostonians. Stamford does have that effect).

But now I was about to head up for the weekend and actually be a tourist. As a bonus, my wife and I were taking Amtrak so I didn't even have to bring the car. So I packed a recently purchased bike and boarded the Northeast Regional on Friday afternoon. 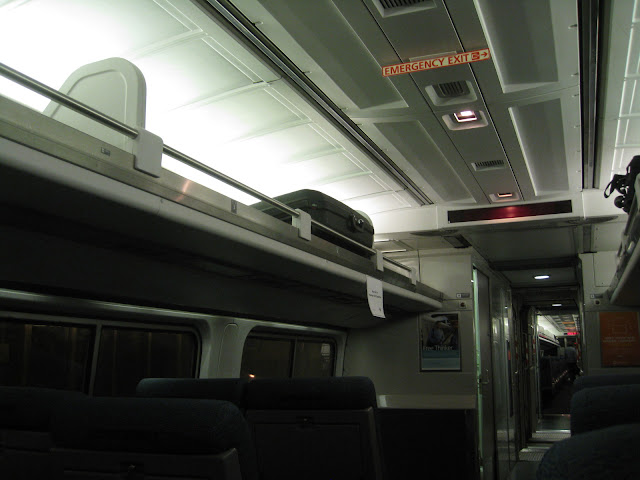 Yes, the bike I brought with me is in the above photo. But here's a picture I took early the next morning when I took it out of the suitcase in the hotel. I put it together so quietly I didn't even wake my wife. 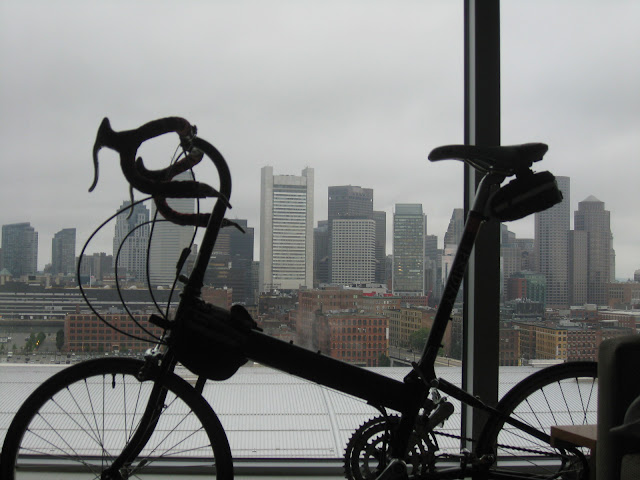 This is what I bought two weeks before my trip to Boston: a 1998 Bike Friday New World Tourist with 405 tires and an aftermarket seat with titanium rails. I should put the Autobot symbol on the case because this is truly a Transformer: it takes me ten minutes to pack it into the Samsonite suitcase it came with and another ten to unpack, unfold and set it up (but I'll save more of the details for the next Folding Bike Week).

I had every reason to be excited about biking in Boston: Mayor Thomas Menino started Boston Bikes (a series of programs and goals to make the city more bike friendly) four years ago this very month. Annual reports showing the cycling related progress they made that year and listing the goals they want to achieve the following year as they move toward a goal “a vibrant and healthy city that benefits all of its citizens.” It almost makes me weep. I want to print it all out, forward it to Stamford Mayor, Michael Pavia, and attach a note that says: 'well?'

The bike-friendly-city-envy starts when you get to Boston South Station. 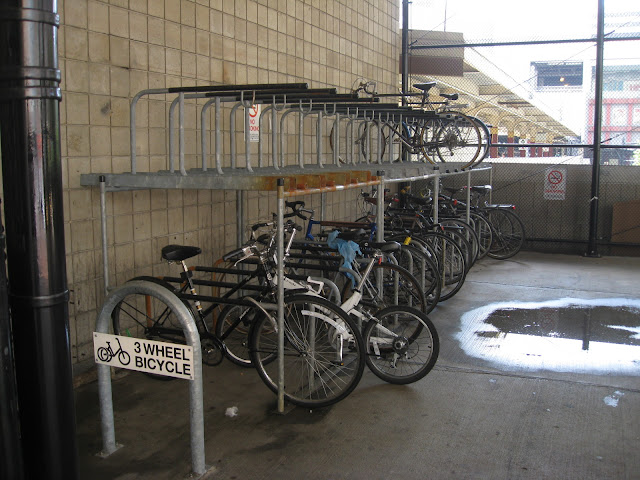 I had never seen bike parking like this: completely covered, reasonably secure, and it has two levels. And this is probably one of the older ones. According to Boston, Menino's program has installed over 1,500 bike parking spaces in the past three years. When I went out for my ride, I saw bikes chained up and down staircase railings and lashed to small trees, so the 1,500 spaces is clearly just a start. 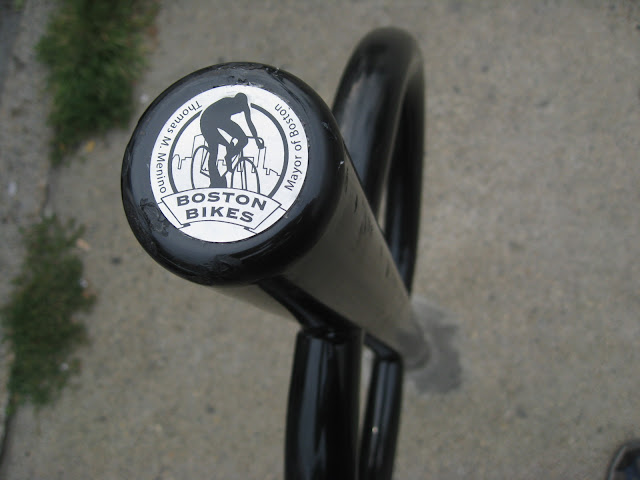 After only a few minutes of riding, I realized the relationship bicycling has with Boston differs from that of other cities like Portland or New York. Boston is like a great apartment, and bicycling is the tenant who has paid the deposit, moved in, met all the neighbors...but hasn't unpacked everything. So you've got rooms that are completely barren and all of the 'Share the Road' signs are hung up on one or two walls. Bike racks are plentiful on one street but nonexistent the next. And if you're not used to seeing bike share stations unexpectedly, Boston will give you a shock – it's the equivalent of visiting someone's bathroom and seeing a huge box marked 'DINING ROOM' sitting on the toilet. 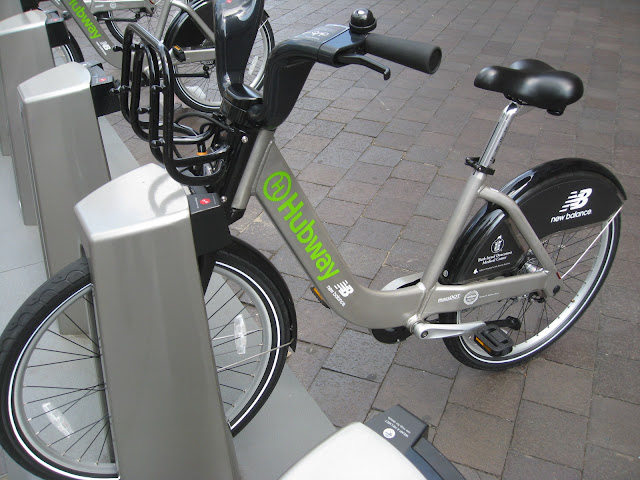 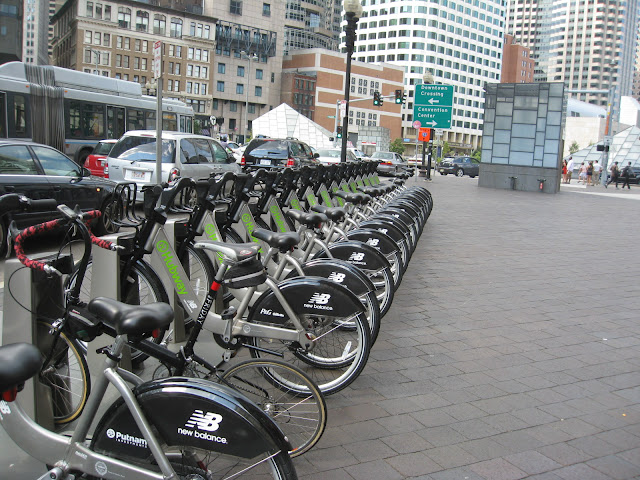 Yes, this past April, Boston went the way of Washington D.C., Paris and London and launched a bike share program. Boston is only the fifth major U.S. city to do this (come on, Stamford: don't you want to be on this exclusive list?)

The thing that made the sight of these stations jarring is the bikes, as you can see in the photographs, are new. Since the European cities I've visited have had them longer the bikes don't look as nice. The number of bikes in this rack just outside of Union Station kept changing throughout my visit and the sight of them around town tells me they won't always look so perfect (but the stations and the bikes will be put away during the winter, so the bikes will hopefully last a long time). 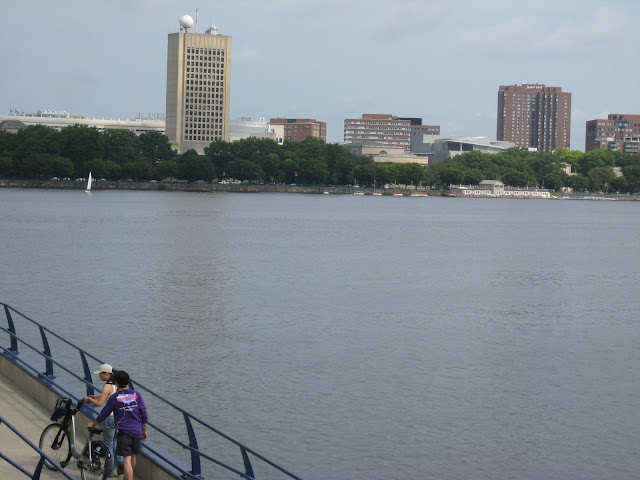 I almost wished I hadn't brought the New World Tourist because I would have loved trying these bikes out. If you want to, Hubway is now doing a special introductory offer of $60 for one year of membership (normally $85 per year), so if you live in Boston or go there a lot, that's what you want. You can also get a $12 three day or $5 24 hour pass at a station kiosk.

I rode for several miles in the city. As you probably guessed, I had my Garmin bike GPS on the handlebars and a map of Boston in my pack.

And as you probably guessed, I got lost.

I found that with the all of the new parking spaces, the lanes, the reports, the goals and the bike share Boston still has its disadvantages. Well, one: it's Boston. Assuming David McCullough has been thorough, we know that John and Abigail Adams weren't really into cycling, so there wasn't anyone back in that era to insist that streets be set up in the wide, helpful, Manhattan-style grid format. After my one and only car trip into Boston, I assumed the city was designed the way it is designed in hopes that the British wouldn't want to invade for fear of getting lost.

But I was reminded of the Portugal trip earlier in the summer because of three key factors: plenty of things to see, surprisingly courteous drivers and history everywhere you turn, such as the Kings Chapel Burying Ground which was established in 1630. 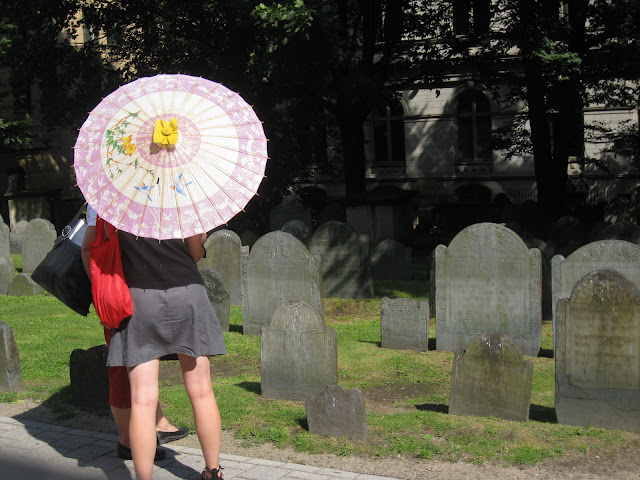 Also, some great television history is around as well. If you make the right number of twists and turns you can come to a couple of landmarks from the great and now off-air Boston Legal, such as the South Street Diner and 500 Boylston Street – the latter of which is used for the exterior shots of the Crane, Poole & Schmidt law firm. 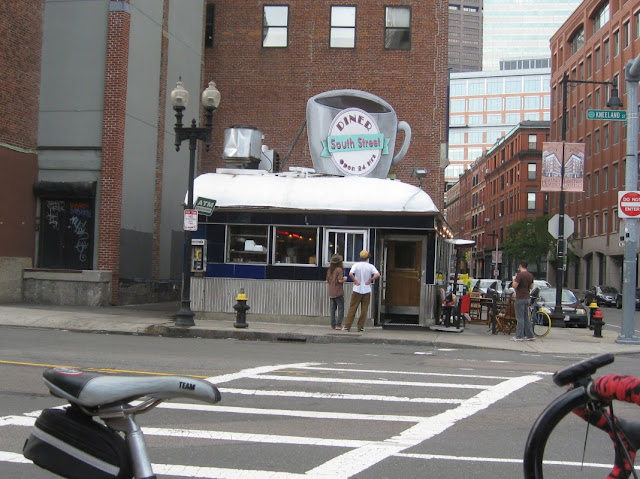 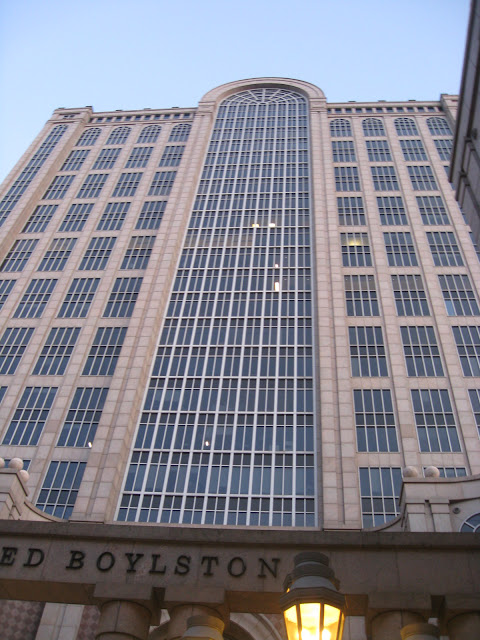 Also on Boylston Street: Sel de la Terre, which features bicycles hanging from the ceiling...and fueled some ideas on what to do with Saved from the Scrapheap bikes. 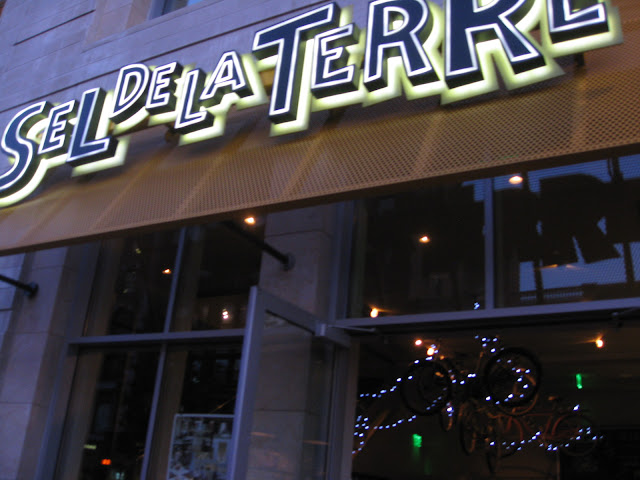 At one point, while my wife and I were taking a walk together before my ride, a random couple stopped us and asked me to take a picture of the two of them together. I obliged, and while I was trying to get them focused in the shot I noticed it was right in front of where they shot 'Cheers.'

I also noticed the Back Bay Bicycle shop, which may or may not have been using one of the 1,500 new bike stands to display a piece of store artwork. 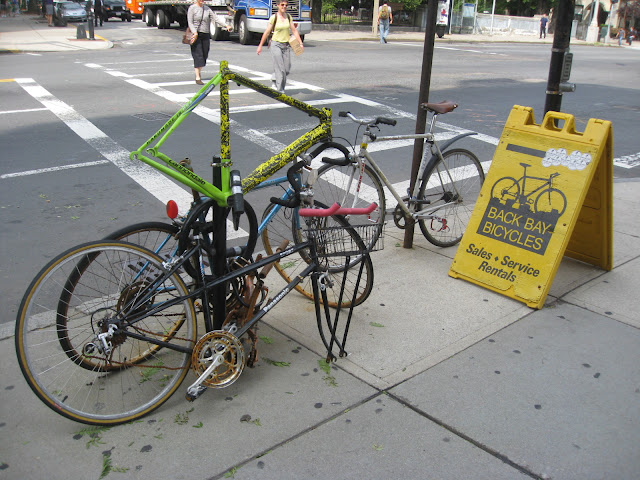 As it happens, the afternoon I went on my ride was the same afternoon the Red Bull Cliff Diving event was being held. It featured divers jumping off the Institute of Contemporary Art and into Boston Harbor. I left my wife there to sketch the event as it started, but I did find a promotional poster on my ride. 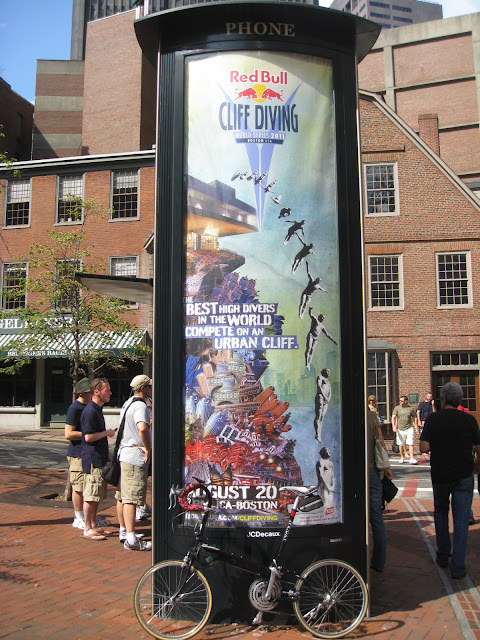 Later, I headed down to the piers where the event was being held. 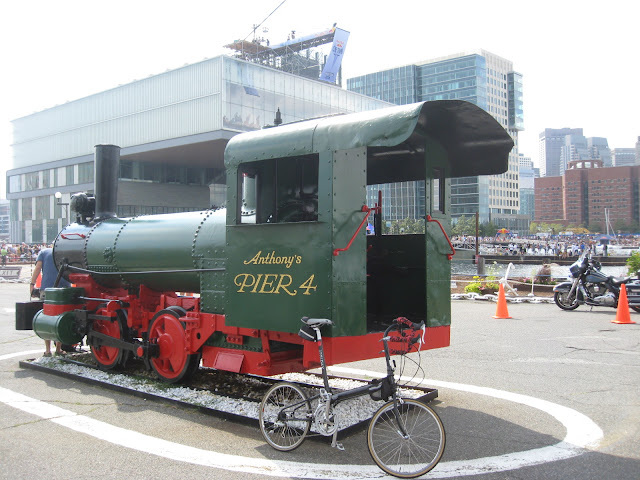 Because of the small size and easy portability of the New World Tourist, I was able to push it gently but firmly through the crowds and got to see some of the divers at work. 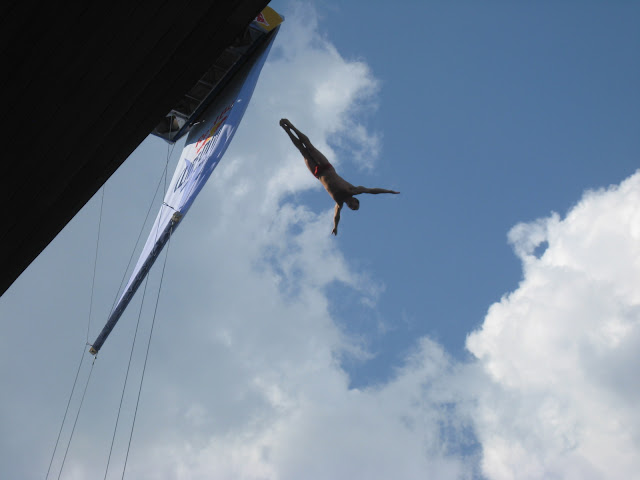 My wife told me I had missed a kayaker who had parachuted in – James Bond-like – to land in the water. If she posts pictures on her blog I'll update this post.

It was a great day riding in Boston. I was having so much fun, I almost didn't want to leave. But after seeing some more sights, visiting some friends and eating some good food, I had to pack my things. 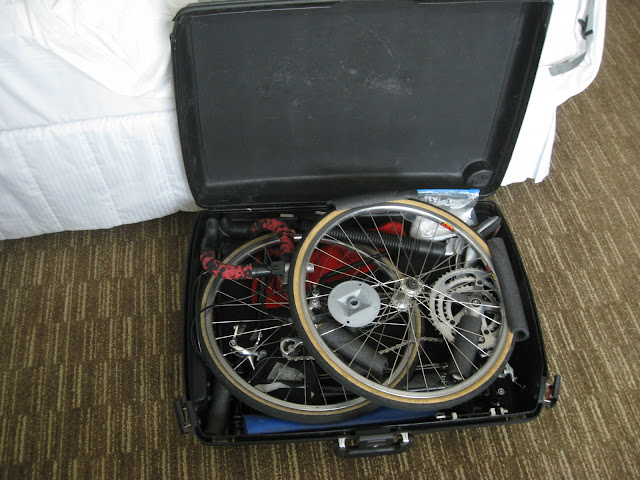 My ride, and my bike, were both outstanding but I think next time I may not even bring the New World Tourist and will instead try out one of the Hubway bikes. Either way, I'm looking forward to the next trip. I'm sure the city will have more of its bike stuff unpacked by then. 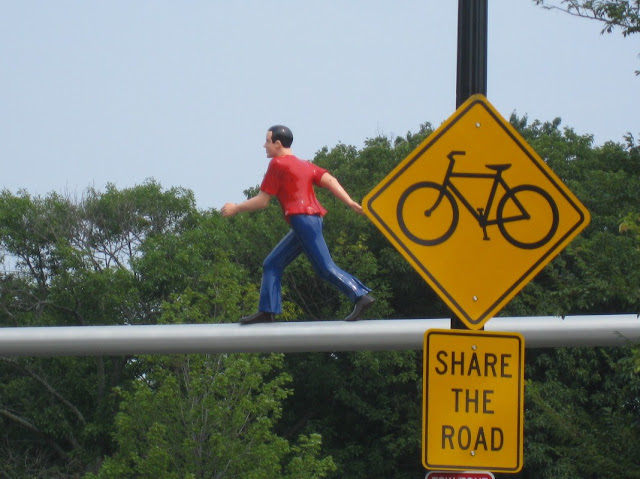