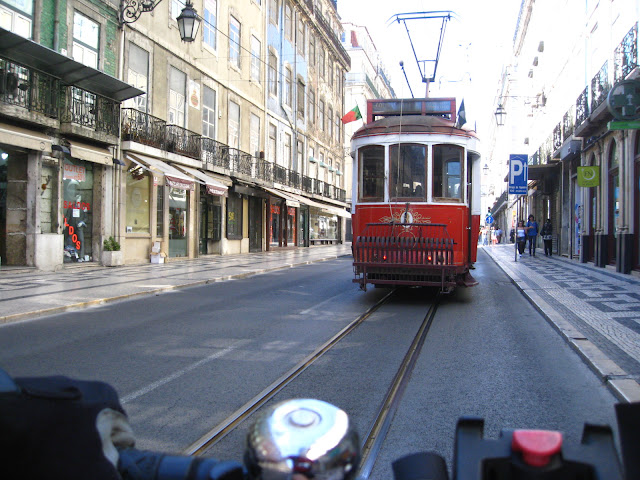 Several months ago my wife said she wanted to go to the Urban Sketching Symposium in Lisbon, Portugal. I knew what I wanted to do but figuring out how to do it was complicated. It was cost prohibitive to airline check one of my bikes ($400 round trip. Seriously?) and my trusted Dahon Matrix would never fold small enough to fit in a baggage claim-friendly case. This meant renting a bike, and in the weeks before the trip I got it done. Barely. What I didn't do was plan my rides in a country I had never been to before and couldn't speak or read the language.

More on that in a minute.

My wife warned me about my desire to spend three days riding around Lisbon. The words hilly and cobblestones came up frequently. But this was a vacation. Since I bike when I am on vacation, I wasn't going to let a little thing like terrain get in the way. When I left her at the university where the event was taking place, I took a good look at the city as I strolled a few blocks to where I was renting the bike. 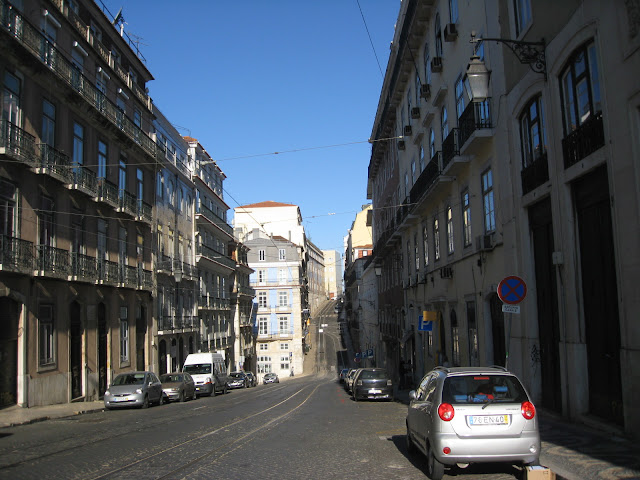 Following a map I got at the Sheraton, I made it to Bike Iberia. The large number of bikes that were being placed on the sidewalk in the minutes before the 9:30am start time made it easy to find. 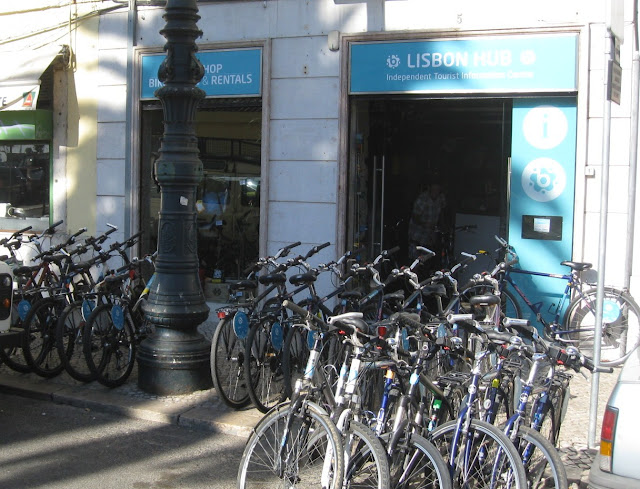 Two weeks before I had been exchanging emails with Ana, an employee there, to figure out what bikes they had available and what the rates were. I wanted to rent a bike for the three days of my wife's conference and stash it in my hotel room at the Sheraton. Relieved to find that Ana was just as friendly and helpful in person as she had been over email, she showed me to my bike. 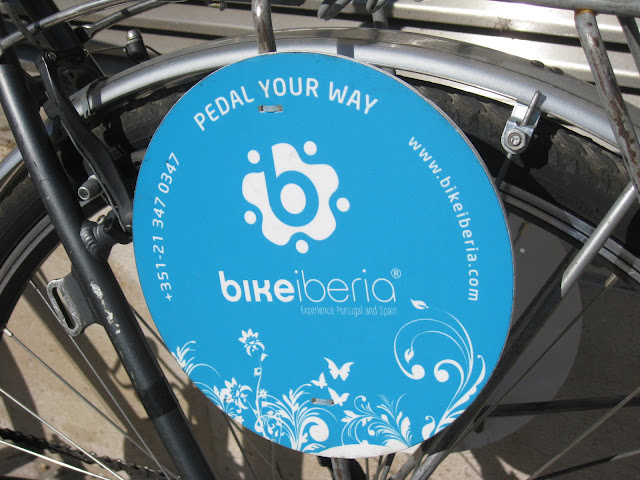 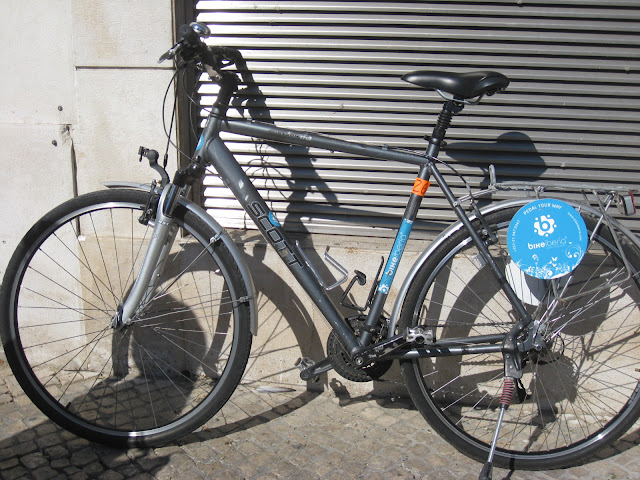 For 73 Euros, this Scott touring bike was going to be mine for three days: it was well used but perfectly tuned with a comfortable riding position, a rear rack and gel saddle. For about 20 Euros less one could rent a bike that did not have a front suspension fork but I was sure I'd appreciate whatever suspension I could get on the roads of Lisbon. Of course, when I arrived at Bike Iberia I was carrying a few things I wanted to use to make the bike a little more...me. 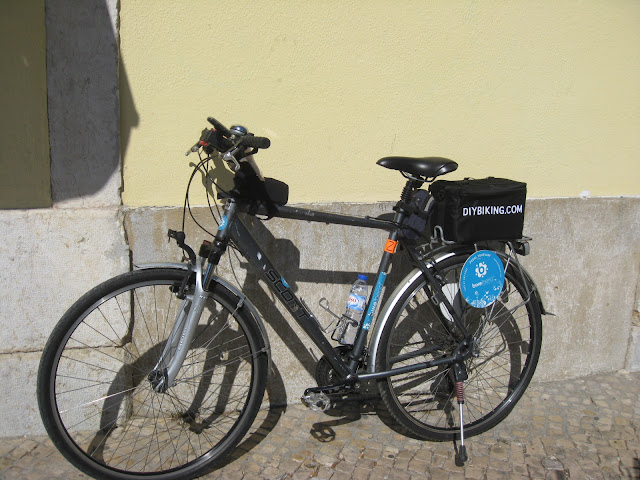 Try as I might, I couldn't get the better bike box in my suitcase so I brought a Cannondale trunk bag, a tiny frame bag that I attached to the top tube to put my digital camera in, a map pocket and my Garmin Bike GPS. Even though Bike Iberia provides helmets (though the country doesn't require users to wear them) I brought my own as I did not want to be without my helmet mounted rearview mirror.

Ana noticed my trunk bag and wasn't surprised when I declined the use of saddlebags or a handlebar bag to put the store-provided cable lock in. What I accepted though was a map of Lisbon that was better detailed than the one the hotel and provided as well as Ana's help pointing out places I could ride. She showed me the bike path along the river (about 8 km) that would lead to Belém and a place where I could buy some of Portugal's famous pastries.

She also said I could take a train to Sintra (a beautiful town northwest of Lisbon famous for its castles that my wife and I visited via train and bus the day before) and ride to the seaside town of Cascais along the coast before taking the train from Cascais back to Lisbon. It sounded intriguing, but I thought the first day would best be spent on as uncomplicated a ride as possible. All I needed to do was meet my wife at 7:30 at the symposium - which meant I needed to be done riding for the day no later than 6:30 so I could shower and change before heading out to meet her.

After thanking Ana for the generous amount of time she gave me, I slathered on some sunscreen from the wipes I had brought and immediately set off for the bike path and rode toward the Ponte 25 de Abril bridge. 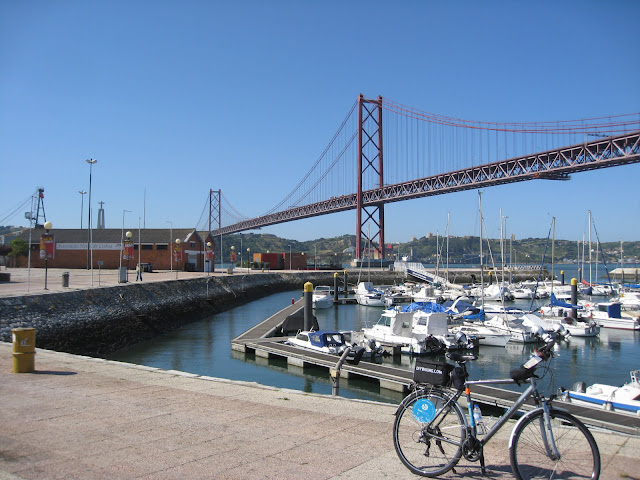 It is a beautiful path; one just needs to pay attention to the changes in how it is marked as it snakes along the river. 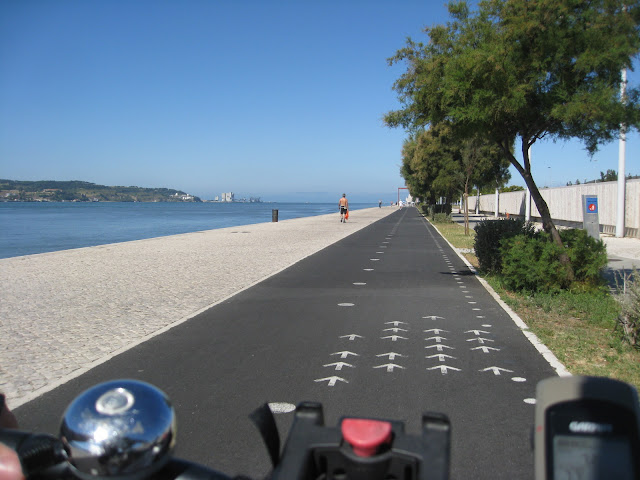 The thing that had surprised me the most about the trail, and of Lisbon from what I had seen of it so far, was that there were not many cyclists. I've been to cities like London, Frankfurt and Cambridge and you can just see how bikes are just stitched into the landscape. On the cab ride from the hotel I could count the number of cyclists I saw on one hand and didn't see much in the way of bike racks. But I remembered it was a Thursday. Maybe more riders would show up by the weekend.

Eventually I came to Padráo Dos Descobrimentos, a monument honoring exploration that is far easier to look at than to spell. 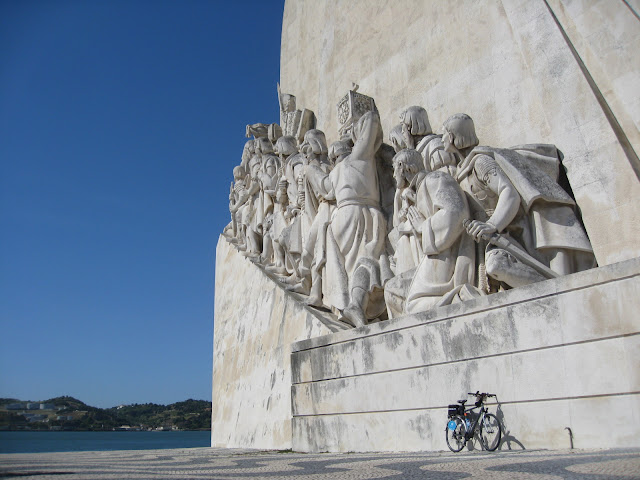 Shortly after I passed Torre De Belèm, which meant the trail was coming to an end and I'd have to turn around. 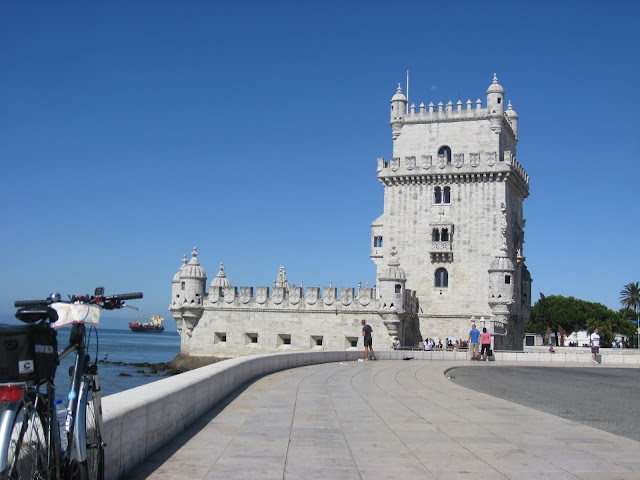 I decided to follow Ana's advice and leave the trail at Belèm so I could visit a famous shop to pick up one of Portugal's signature pastries, which can best be described as a cross between a common tart and a really good Boston Cream donut.

I completely lucked out with my timing: I easily made it into the shop and even chatted with the person behind the counter who was admiring my helmet rearview mirror before getting a pastry for just under one Euro. Just as I was leaving a huge tour group entered and they all waited in line to get their hands on the same thing. I briefly thought about selling my pastry to the person at the back of the line for five Euros, but I thought better of it. 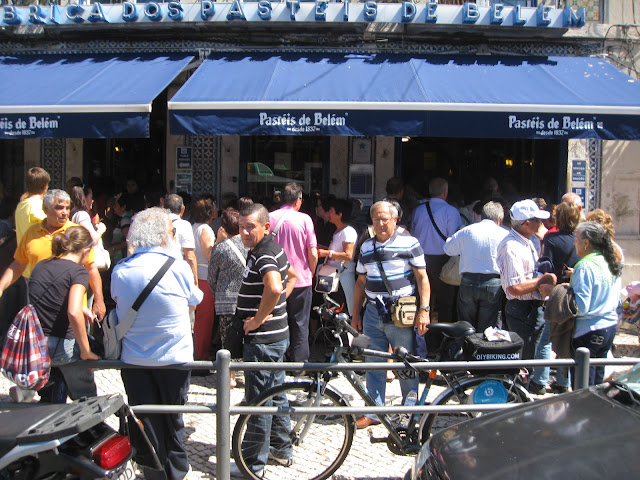 Now, I left the pastry shop and the bike path behind entirely and did what I wanted to do: ride around Lisbon and do some sightseeing. That meant riding on the streets and being wary of trolley car tracks. To my pleasant surprise, I found the drivers of Lisbon to be a mostly pleasant bunch who usually gave me plenty of room when passing and didn't ignore me when I'd merge into one of the city's many traffic circles. I was thankful for my rearview mirror so I could see them coming, but I still felt safe on a bike and didn't feel like an enemy in occupied territory. The other nice thing is that in Portugal, the cars drive on the right side of the road so there was no need to relearn how to watch for traffic.

It was good that I felt safe, because I got lost. Several times. Yes, the cyclist who brought a map pocket and his own GPS got lost frequently. I don't have the best sense of direction and found the frequent elevation changes that came with the short, steep hills disorienting at times (it was also slightly euphoric to be 'off the grid' for a few days). I quickly discovered that being lost in Lisbon is a very pleasant kind of lost, because I found that when I was looking for something, like a specific street or a landmark, I'd come to another, like the Aquaduto das Águas Livres, or, roughly translated, “a really cool aqueduct built in the 18th century.” 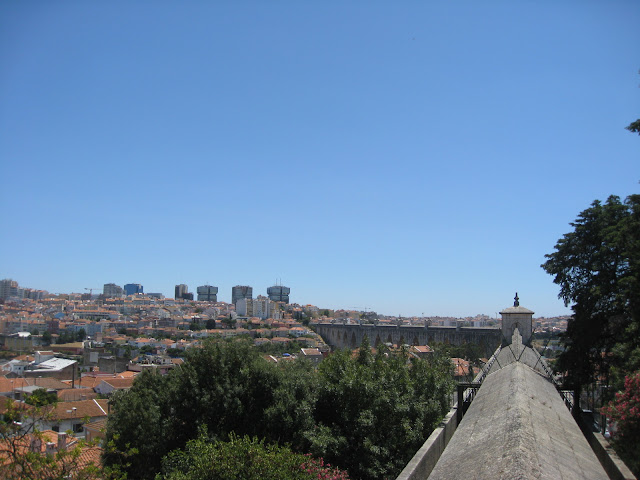 After checking out the aqueduct, I meandered around Parque Florestal De Monsanto for a while and ended up pumping the pedals up a hill to get a rather grand view of the city. 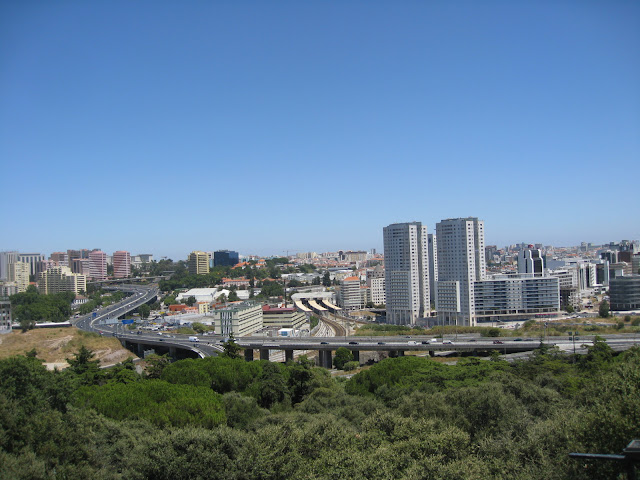 Soon I got rather hungry and decided to leave the park and stop somewhere for lunch. I got lost leaving the park and ended up in a nice residential neighborhood and had to ride a little while before finding a little café. 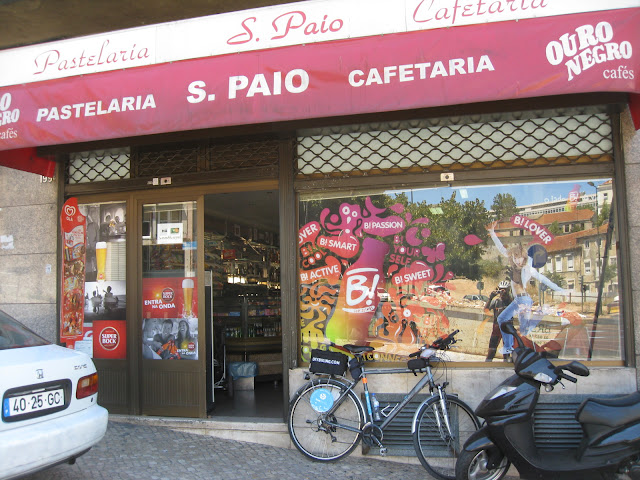 Since it was late in the afternoon and I didn't want to eat too much I picked the least expensive item on the menu. Six Euros, I thought, would be the right price for a sandwich, right?

I waited at a table and admired the un-understandable and heated discussion going on among a group of men who were watching the Tour de France on the wall mounted TV. Within minutes, my order, which was not a sandwich, arrived. 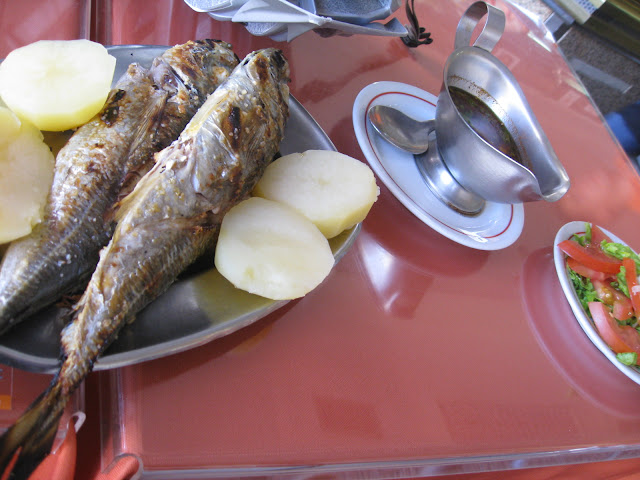 Now, it was my own fault for not bringing a Portuguese phrasebook. But on the flipside: if you eat anything and are planning a trip to Portugal you are going to love it. I never intentionally order whole fish, but I saw the humor in my situation (I even ate an eyeball for fun) and the meal itself was amazingly good. Two fishes, a salad and some potatoes for six Euros is value.

After lunch, I spent some more time getting lost in Lisbon, eventually finding my way back to Eleven, a very nice restaurant my wife and I ate at the night before. 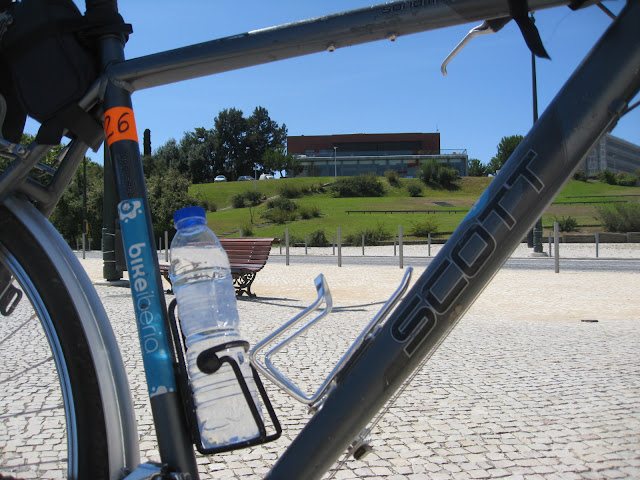 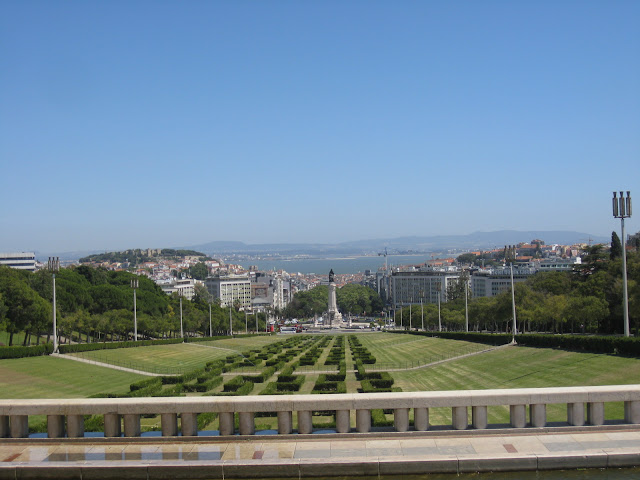 By the time I decided to stop, I had gone 21 miles. I was having a lot of fun riding around and getting lost, but I couldn't put my finger on my relationship with Lisbon. The city was fun but it didn't seem interested in allowing me to find my way around easily. It's a little like an attractive woman you want to date who only wants to be friends.

Eager to try and take my relationship with Lisbon the next level, I decided to walk from the Sheraton to the symposium to meet my wife at 7:30. I of course took a map and set off at 6:30 to give myself plenty of time to get there.

Unfortunately, I neglected to bring the piece of paper that had the symposium address. Panic officially set in at 7:25 as I couldn't ask most people where the symposium was because I didn't have an address. I also couldn't call my wife because I didn't have a cell phone, and I knew that if I didn't arrive by 7:35 she would automatically assume I had been killed and was tangled up in a trolley's undercarriage.

I arrived at the symposium at 7:42, covered in sweat from running. My wife hadn't yet used her phone to call the hotel but she had, of course, been worried. We laughed about the experience over dinner.

When we got back to our hotel (which didn't object when I wheeled the bike into the lobby earlier that day - thank you Sheraton Lisboa) I studied the city maps, determined that I would be able to lean in for a kiss by the end of my date with Lisbon. Whether the city would kiss me back was another matter. 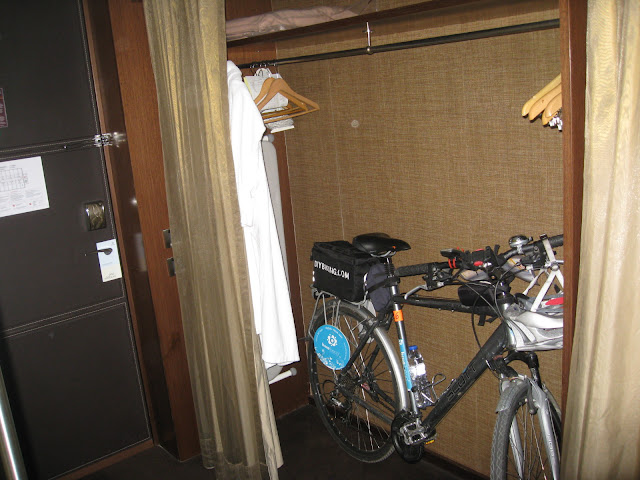