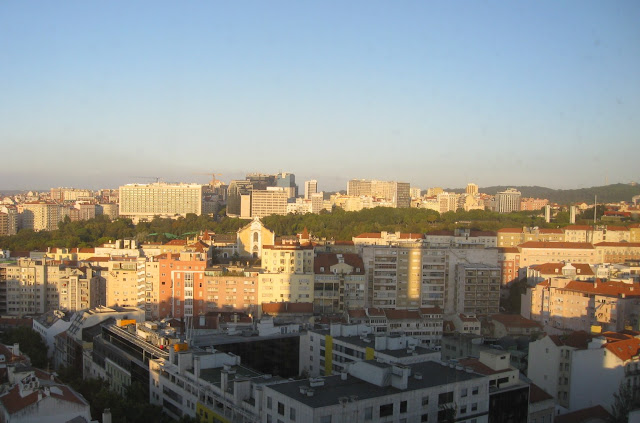 Day two of Lisbon looked as though it would be just as beautiful as day one. It was going to be a short biking day as my wife and I planned to make a mad dash by train to Cascais during her early afternoon break at the Urban Sketchers Symposium.

Early in the morning, we raced each other (she in a taxi and I on my bike) from the Sheraton Lisboa to A Brasileira so we could have breakfast together before her class. Thanks to the address debacle of the night before, I now knew that area well and easily beat the cab. 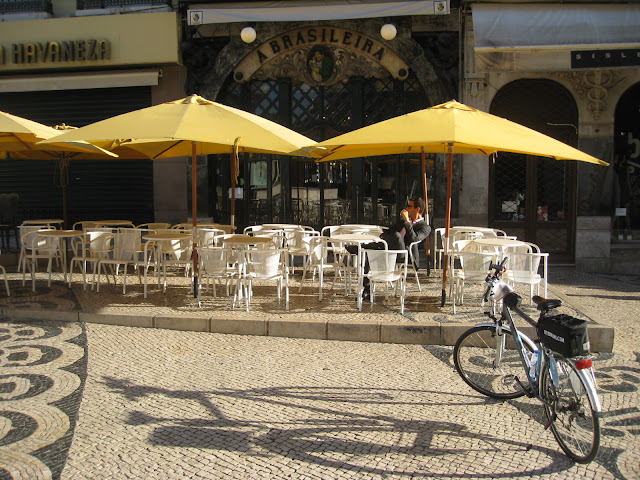 When I locked the bike up I couldn't help once again noticing how beautiful Lisbon is and why I didn't mind the hills: you can actually see interesting things. 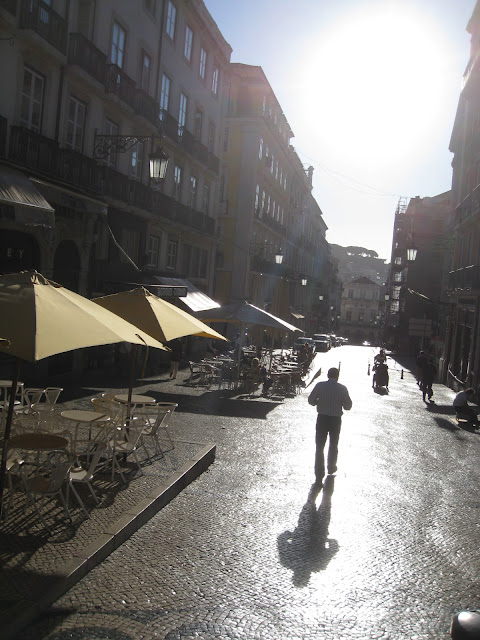 After some good coffee and a ham sandwich, we separated so she could go to class and I could try out a a second date with Lisbon. I first had to descend the hills into Baixa. Thankfully, the guy at Bike Iberia did an excellent job tuning the brakes. 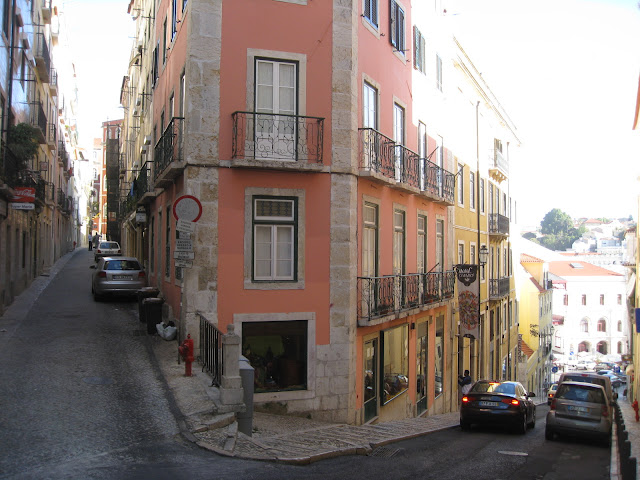 Within minutes, I was in the heart of Baixa with all the shops and cafés. Off in the distance I could see Arco da Rua Augusta, which translated into English roughly means: 'you can't miss it.' 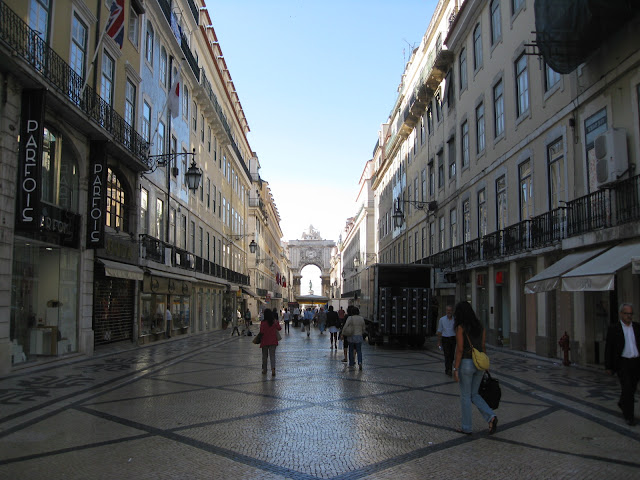 I didn't stay too long: I only had the morning and I was determined to use it effectively. My goal was to cross Baixa and check out St. Jorge's Castle, which is positioned on a large hill in Alfama. This meant looking at maps and biking uphill at the same time. I did pretty well with the second part as I made it up to the cathedral. 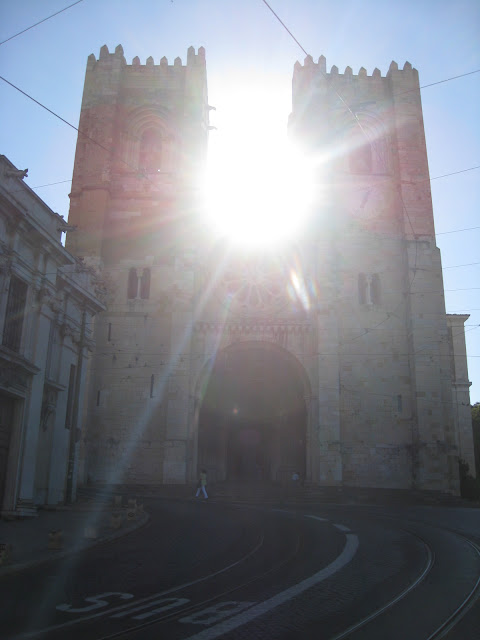 I climbed further, pausing at the most interesting tree I had ever seen. 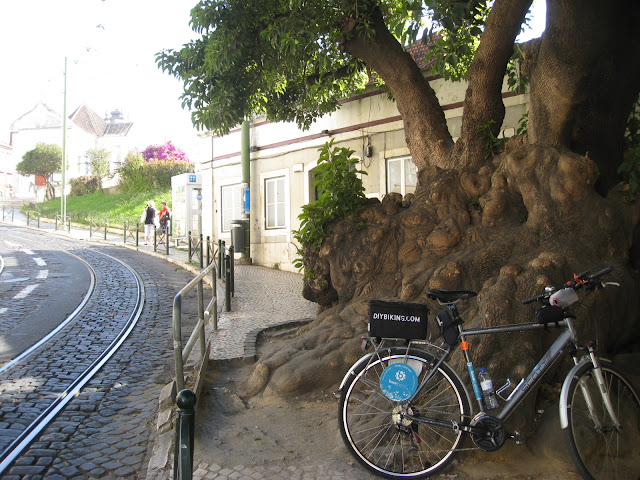 I stopped to take some pictures of the river while I gained altitude and felt like another cup of coffee and a pastry. So I found both, which was not hard to do. 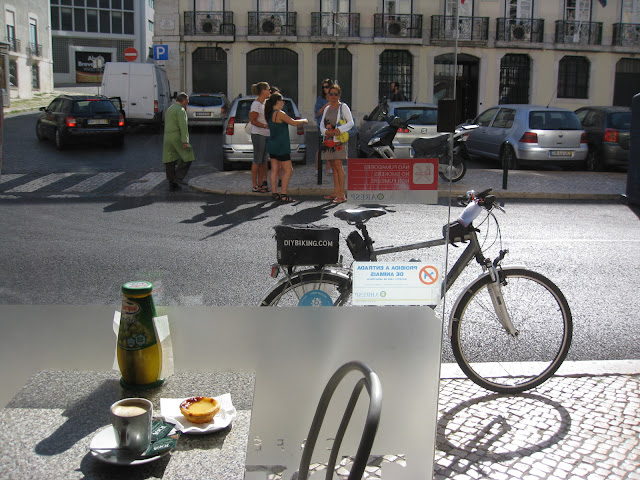 I continued on and soon found that my second date with Lisbon was just as fun - and awkward - as my first. I didn't make it up to the castle and had once again become lost. So lost in fact, I had to use the little 'breadcrumb trail' feature on the bike GPS to find my way back to roads I recognized. Still, it was a beautiful ride. 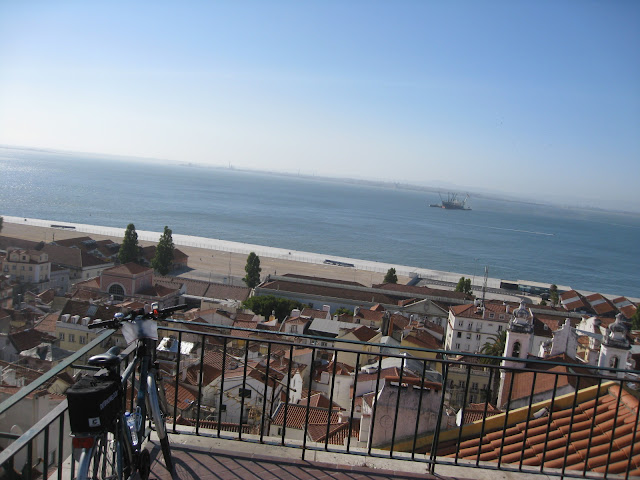 Once I found my hotel I had only an hour before I'd have to change clothes and meet my wife, so I decided to ride as far as I could for a half hour before turning around and heading back. Since the bike path the day before took me east, I decided to ride west. First, I headed back through Baixa and past Pr. Do Comercio, which is on the other side of Arco da Rua Augusta that I saw earlier that morning. 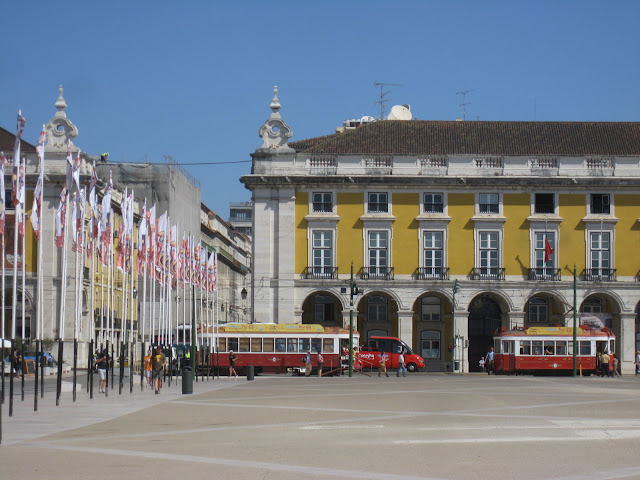 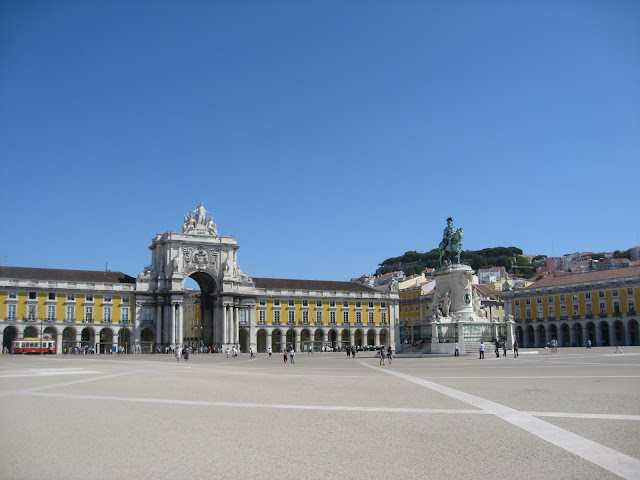 Along Avenida Infante D. Henrique (roughly translated: 'busy road by the river') I got to build up some speed on the level ground as I headed west. Eventually, at the thirty minute mark, I arrived here and had to turn back. 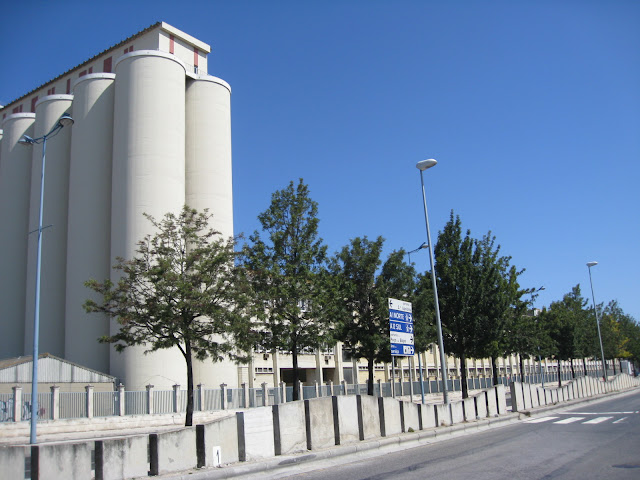 I realized that I had traveled in a pattern resembling the letter “C” so remembering that the quickest distance between two points was a direct line, I decided to cut across.

As it turned out, there were two problems with this strategy. First, I was in Lisbon so many of the streets weren't in a 'direct line' and second, there was a lot of climbing involved. 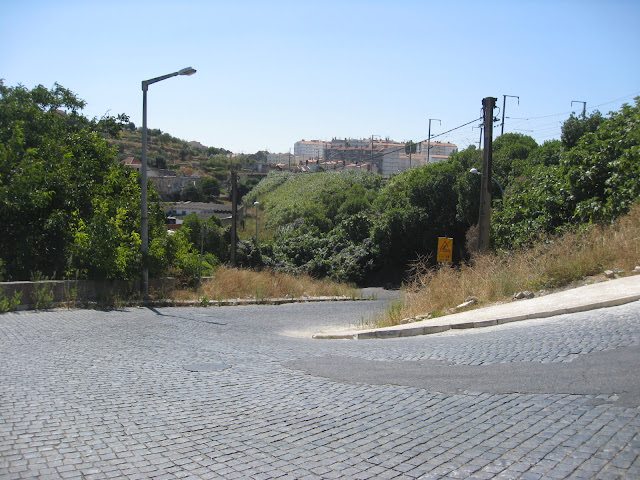 After making numerous twists and turns I eventually made it back to my hotel - an hour and ten minutes after I set off on the one-hour run - which brought the morning's trip to 16 miles. I had to quickly shower, change clothes, then take a reasonably priced taxi back to A Brasileira, where I sat outside with a cappuccino and another pastry as I waited for my wife to arrive. It was another great day of biking, but I still wanted to get to the bottom of the mixed signals Lisbon was sending me. There isn't a lot to like about cobblestones, steep hills and narrow streets by themselves, but for whatever reason they all work in Lisbon and combine into a fun cycling experience. But I was still having trouble finding my way around easily.

My third and final day of riding was one sunset away. Would Lisbon stand me up on the third date? Would I even show up for the date because I had gotten lost?

I didn't have much time to answer either question, because my wife arrived and after a quick lunch we set off for the train station that would take us on the 35 minute trip to Cascais. Upon arrival, we literally had less than an hour to sightsee, so we took another reasonably priced cab up to Boca do Inferno to look at the coast. 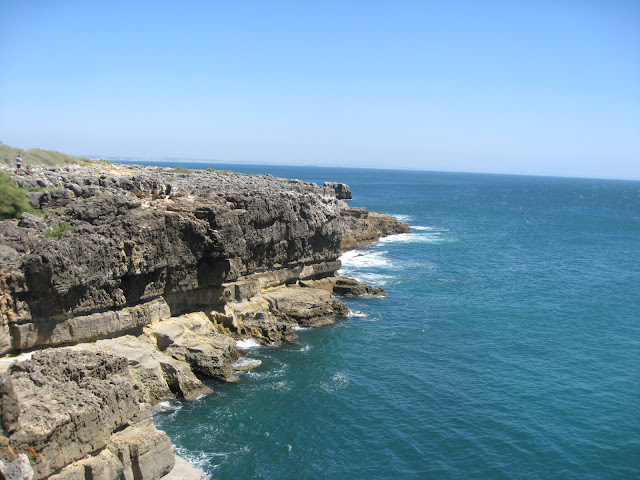 I noticed a bike path nearby that stretched along the road and snaked off into the distance. As we took the cab back to the station I realized that for my third and final date cycling in Portugal I should do something ambitious and create a plan I'd have to adhere to: I would ride through Lisbon in the morning, take a train from Rossio station to Sintra, ride from Sintra to Cabo da Roca (the most western point of mainland Europe), ride to Cascais, and take the train to Algés station, which would put me right next to the end of the bike path in Belem where I could easily ride back to Lisbon...where I'd return to the hotel (without getting lost), change clothes, and then ride casually but triumphantly back to Bike Iberia (without getting lost) to return my bicycle before the 7:30 closing time. I had no idea how many riding miles it would be but I was sure it would be more than thirty.

It was an ambitious plan, but I was determined to impress myself and ensure Lisbon wouldn't give me a “let's just be friends” talk at the end of the next date. 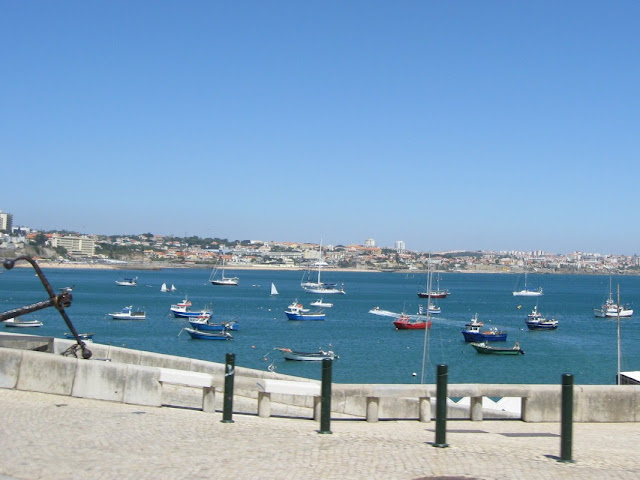