While pedaling on Shippan Avenue the other day I spotted a woman on a mountain bike stapling tag sale signs to utility poles. I struck up a conversation with her easily (the recumbent is a great ice-breaker) as we rode to the sale together. By the time we passed Ocean Drive East I had told her about DIYBIKING.COM and said I hoped to find a bike at her tag sale I could use for my 'Saved from the Scrapheap' series.

I must have been unusually charming that day: by the time we got to the sale, she said she'd give me an old bike that had belonged to her mother for free. All I had to do was follow her to her home to get it (I picked it up in the car later). 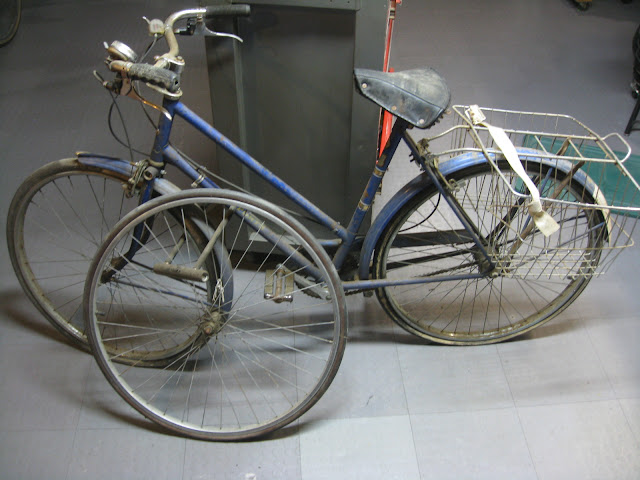 I accepted the bike sight unseen and she confessed the blue Raleigh had been locked to another bike's wheel for some time and she didn't have the key. When I get free bikes, I'm used to seeing them in rough shape, but this was another animal altogether. But she was eager to give it to me and I was interested in another challenge so I accepted (I thank you profusely).

All I've ever known about U-locks is the bigger the better. The recumbent carries a Kryptonite New York Lock that I've had ever since I got the bike. It's filthy and worn but as far as I know no thieves have tried to penetrate it. For the Dahon Matrix I went a bit weirder with the Masterlock Street Cuff. For going to the grocery store or the like I just chain it to the frame, but if I'm in New York City I fold the bike, lock one end to the front wheel, thread the chain through the rear wheel and triangle, and lock the other end to something.

I don't think anyone has tried to open that, either. But now I had to open this one. 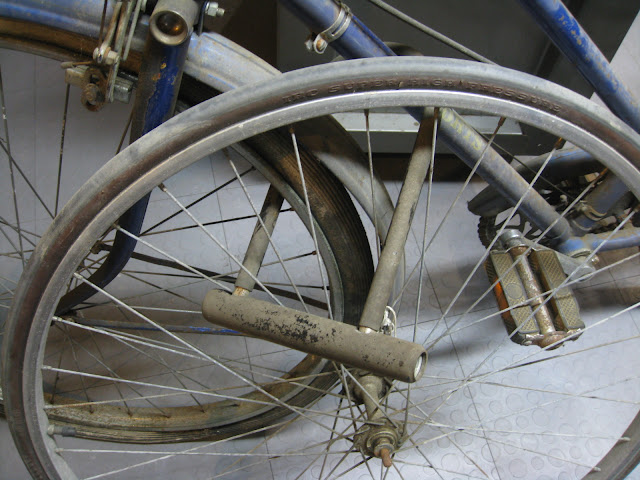 I decided that in order to open a bike lock, I needed to play the part of a wily bike thief. I had to pretend the lock was attached to a much nicer bike, but this was, after all, a fantasy.  Determined to open the lock as fast and as noiselessly as possible, I decided to see how quickly I could open the lock. I started at precisely 7:00pm.

The first thing I did was look at the lock. I couldn't tell who made it or when, and even if could that information wouldn't do me much good anyway. 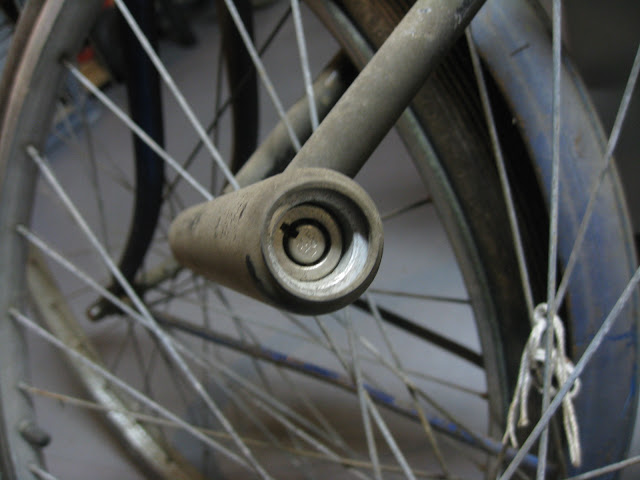 But I remembered that there was a brand of lock that could be picked using the back of a Bic pen. Was this the brand? There was only one way to find out. I rummaged for a Bic pen but only came up with a tan and maroon one that came from a Marriott. I pried the end off and jammed it in the lock. Nothing. I wiggled it around for several minutes. Still nothing. I pushed it in further and only managed to put a streak of black ink on my forearm. This was ridiculous. I headed into the welding room and brought out a tool to show the lock I meant business. 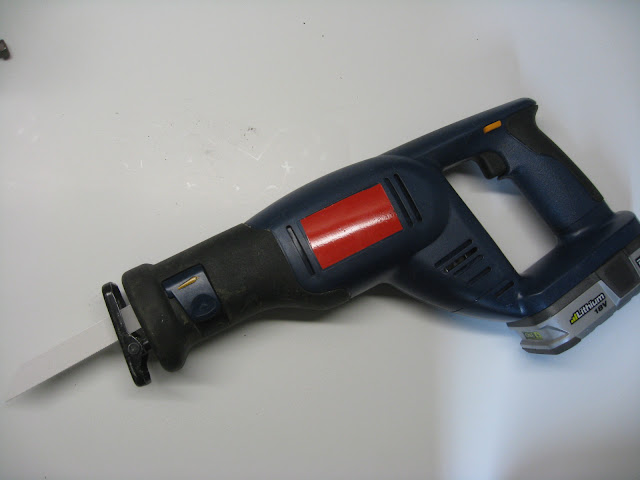 Yes, the Ryobi ONE+ reciprocating saw. It would be a lot noisier than the pen, sure, but I was positive this tool wouldn't let me down. Plus it was cordless, so it was plausible a cunning criminal would be able to carry it with him. I held onto the lock to keep it still and pulled the trigger.

I wish I could tell you the saw cut through the lock like hot butter, but no such thing happened. Instead, the air was filled with a shrieking sound, the blade was dulled and there was barely any indication on the lock that anything had happened. There was so much noise I was sure that if I were a real criminal I would have been caught, arrested, and let off by Casey Anthony's attorneys.

I wondered if I could use a pipe cutter on the lock somehow, but there was no way it would work with the other front wheel in the way. Since there was still a little bit of bite left on the reciprocating saw blade, I did the obvious. 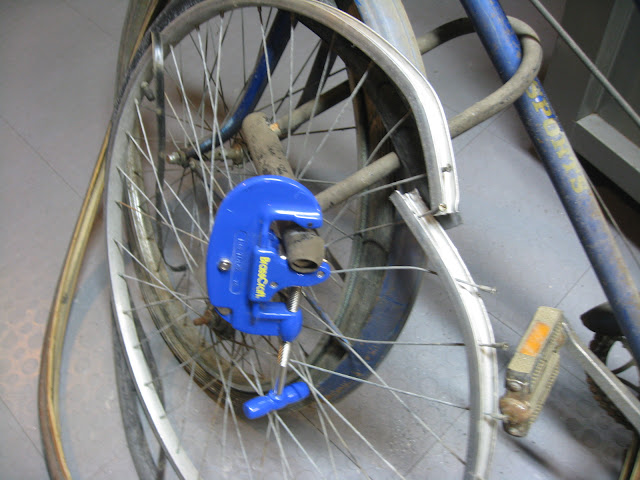 Even when I tossed the wheel aside and put the pipe cutter back on, I knew the lock would resist. All I was able to do was cut the rubber tubing encasing the lock and dull the pipe cutter (which I used to cut the old Diamondback in half to create the DiamondSchwinn). I quickly abandoned the pipe cutter, but the clock was already at 7:11.

Finally, I picked up my 15+ year old Dremel rotary tool and attached a cut-off wheel. I plugged it in, put on goggles and ear protection and set to work. 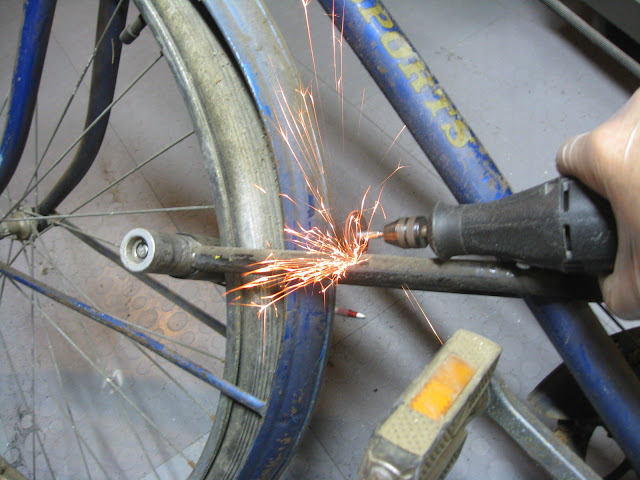 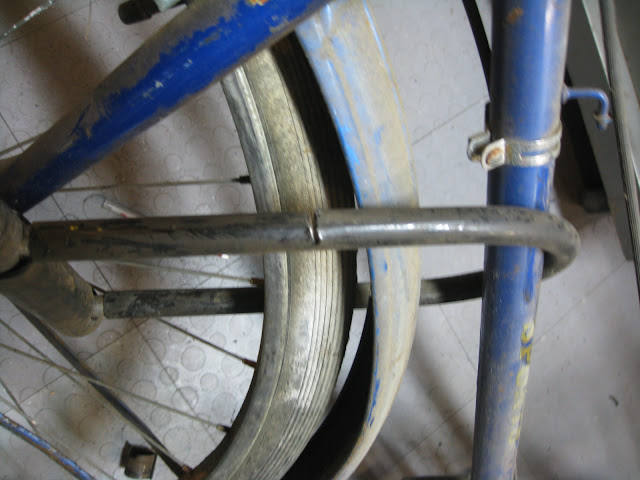 I was making progress.I had to hold the tool and the lock steady and keep the sparks from burning the hair off my arm. It was working. I was now over 3/4 of the way through...but I didn't feel like using the Dremel any more. So I grabbed my small sledgehammer and gave the lock a good whack.

Then I gave it a better whack. Then one more. Finally: 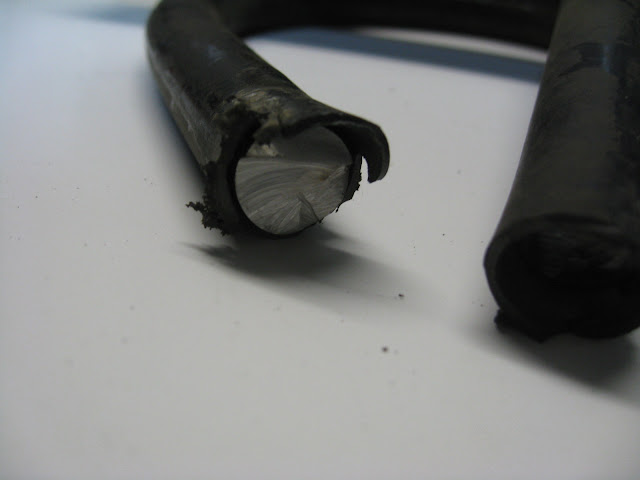 I don't know any bike thieves I can compare and contrast times or techniques with. At any rate I doubt many of them carry a generator and a Dremel with them to open up locks. Given that it took me about ten minutes to cut open the lock with the corded Dremel, I doubt the little battery powered one would be faster.

So the lesson here is if you want to defeat a lock (that's yours, of course), skip the reciprocating saw and other tools and go straight for the Dremel. Actually, just don't forget your combination and never lose your key.

Folding Bike Week begins on July 31st. Be sure to remember it, make a note, and tell your friends. An easy way to remember Folding Bike Week is that it is the same time as Shark Week on the Discovery Channel. After all, sharks and folding bikes have several things in common: they've been around a very long time, can bite you if you don't respect them, are  misunderstood, and deserve a week in the spotlight. Be sure to spread the word and tune in!