After one gathers all Hurricane Irene essentials, one can often be consumed with boredom. Bottled water, check. Canned food, check. Flashlights, check. Bananagrams, check. Every Ryobi ONE+ battery in the house fully charged, check. Going over the list of essentials again, check.

Tired of watching breathless meteorologists talk about how Hurricane Irene was beating up North Carolina and taking its lunch money, I decided to keep myself busy on one more essential: an “aftermath” bike.

We, literally, took every possible precaution in this storm. But there's one thing about riding out the storm at our house: we wouldn't have a car. The day before the storm hit, I took our 2006 Honda Element to my office and parked in in the rear of the in-building parking garage where it would be on higher ground and safe from the wind. We do not have a garage of our own and I wasn't willing to leave the car in place with all the tall, loose-limbed trees around. This is good for the car, but it does leave my wife and I without a lot of options when we want to move around after the storm – which I was sure would leave the streets of Shippan Point riddled with debris and some flooding.

I know I've used the Dahon Matrix before for Storm Damage Assessment and my homemade mountain bike would be up for the challenge, but I wasn't crazy about exposing either bike to salt water or a falling tree branch. So to change that and to give myself something to do before the storm, I decided to make an aftermath-ready bike out of something that has sat in 'Saved from the Scrapheap' purgatory for months. This is a Magna Great Divide I took from the Metal Only bin. The name “Great Divide” refers to the fact there is a Great Divide between this bike and one that I would enjoy riding.

The reasons one should buy a bike at a local bike shop rather than a big-box discounter like Wal-Mart and Target are worth a DIYBIKING.COM special, but for now I'll just focus on the two most annoying things about this terrible bike: the rear derailleur has a powerful spring in it that brings the chain to the highest gear at all times. The flimsy twist-grip shifter just isn't strong enough to survive this tug-of-war so if you want to stay in a low gear, you have to hold the shifter just so. Twist it too far and the chain jumps over the rear sprocket and gets wedged in the spokes.

The other annoyance is the short, child-size crank arms. And I know they are child-size because normal pedals don't fit in the openings. Child size pedals do since this shares the same parts with a child sized bike. It probably wasn't even the bottom of the cost-cutting well the design of this thing was wadded up and tossed into.

When I rescued the bike, the wheels were so bent they could hardly be described as round, so I fitted two others from an old Raleigh. A few adjustments made it work but it was an irritating ride. With no decent parts to scrounge and no welding projects pending, it hung on the wall (two hooks away from the snow bike) until Hurricane Irene Eve. It was then I realized it would be the perfect aftermath bike. The short crank arms might give my feet a little more clearance if I ford a flooded road and I wasn't worried what would happen to it on the ride.

So, the day before the storm, I turned the Magna Great Divide into...this. 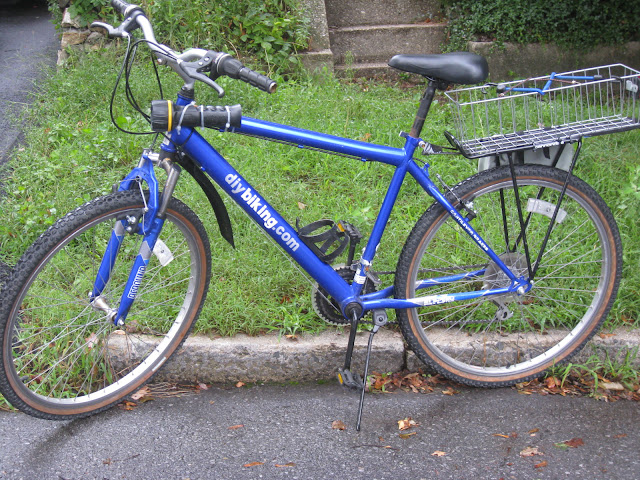 Right, so the first thing I did was take an old Cannondale rear rack and mount it on the back. As you can see I had to use the quick release bolt on the seatpost and some electrical tape to make it fit. I then took a piece of plastic and taped it over to give the bike more of a fender. I rigged a new fender right up front and while the front has your attention, look at the waterproof flashlight fastened to the frame.

And the key to all of this is the rear metal basket. This was from a piece of IKEA furniture that my wife wasn't using. It turned out to be the perfect size for the intended cargo: my battery-powered Ryobi reciprocating saw. Naturally, I added a red reflector for safety.

Last but not least, I peeled off the frame labels (cost cutting move #256 in the Great Divide's original design) and put the DIYBIKING.COM brand on it.

So I took it outside for this picture and moved it into the living room for the duration of the storm. My wife and I were sure that our house, which often would lose power if you stared at it long enough, would go dark quickly.

It turns out that the household with, I'm nearly certain, the most flashlights per capita of any home in Connecticut did not need them. We were spared, so we spent the morning doing normal Sunday things. The only difference is we kept tuning in to the Hurricane Irene announcements. 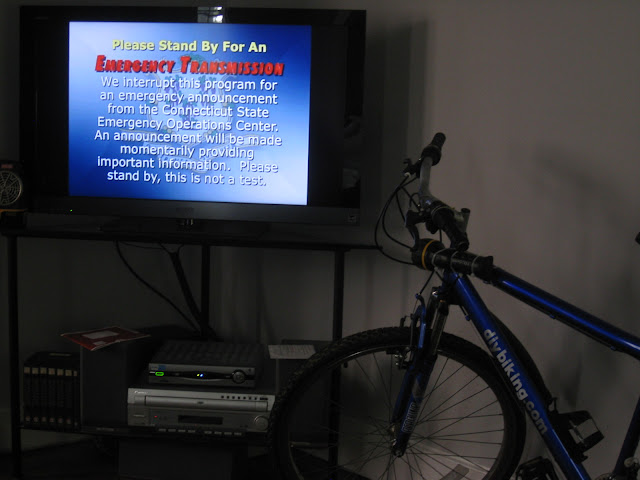 The storm knocked several large branches down on my neighbor's cars and inflicted only slight damage. As for us, a huge branch fell straight down and landed smack on the spot where I usually park the Element.

Around two in the afternoon, I decided to take the Aftermath Bike on a ride. First, I used my reciprocating saw to make short work of the branch in front of my house. Then I set the saw carefully in the rear basket and made a mental note to be very careful when throwing my leg over the seat. 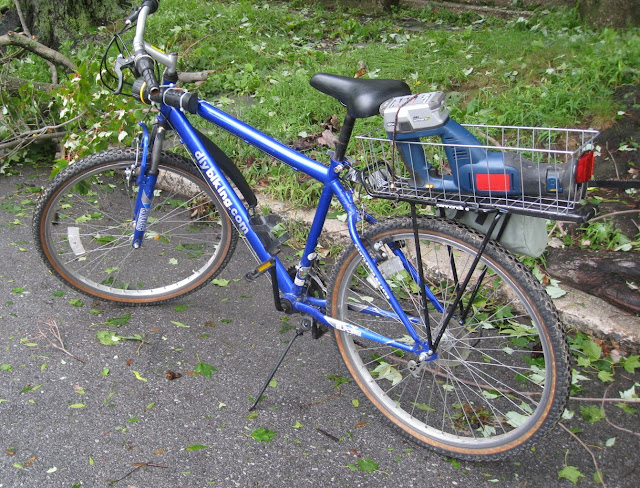 Wearing tall rubber boots which I struggled to put on the tiny pedals, I set off.

The first place I went was West Beach. It's about a ten minute walk to get there from my house and I wanted to see if the hurricane had shortened it to a more manageable seven. It didn't, and I was happy to see that the new pier at Cummings Park had stood up to Irene. The concrete sidewalk along the beach, not so much. 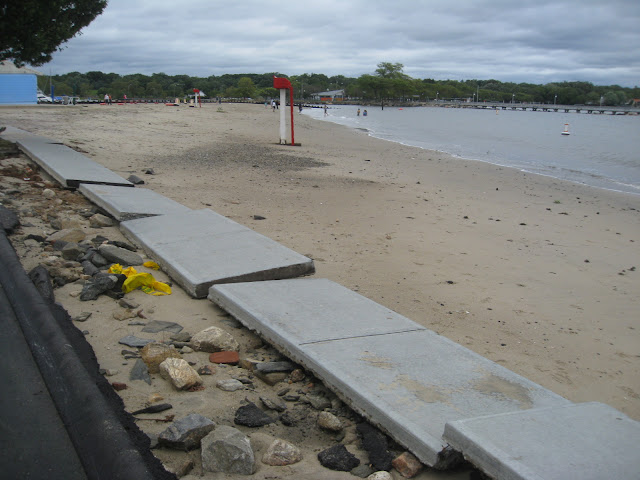 The storm had uprooted only one of the park benches. People were actually seated in all of the other ones; just watching the waves. 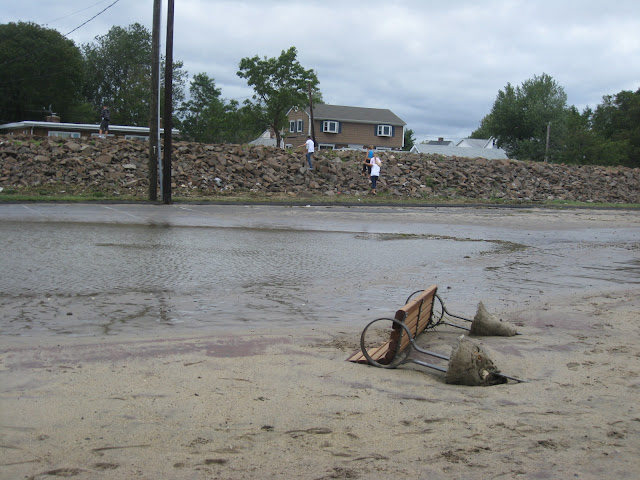 On Shippan Avenue, the tires bounced over broken branches and other things the storm had churned up. The road was busier than I thought as I realized a lot of my neighbors must have had cabin fever and wanted to get out of the house.

I rode slowly for two reasons: the idiotically tiny cranks and I was looking out for downed power lines. Turns out, crews had already been by to block off some of the dangerous spots. 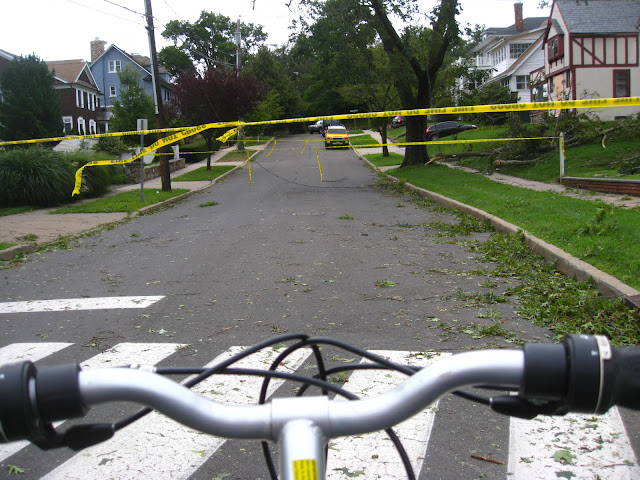 I headed further into Shippan Point. Just when I began thinking that my neighborhood had gotten off light, I rolled down Sea Beach Drive...and stopped. 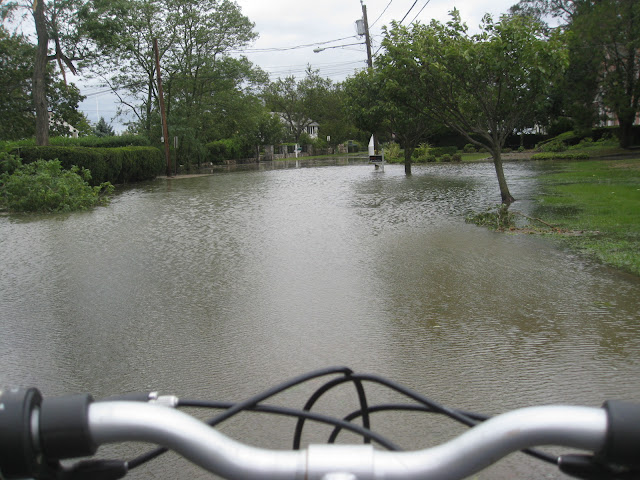 The street was on the city's evacuation list for a reason. I decided against fording through to the other side since it looked over 18 inches deep in places, so I headed around the long way, struggling to keep the bike in gear while going up and around. I took a picture of someone at the Woodway Beach Club looking out onto Long Island Sound. 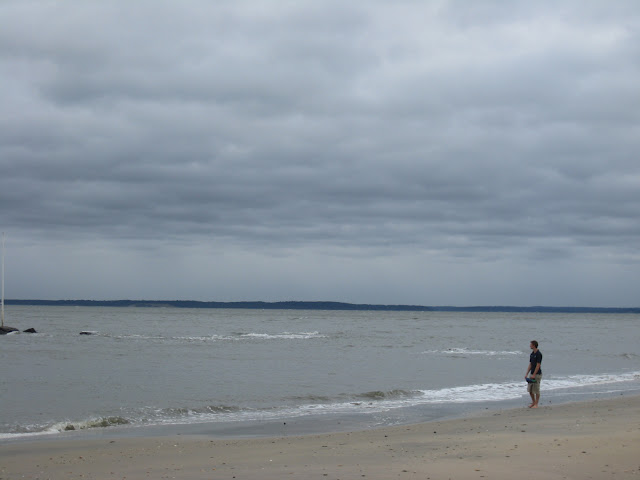 I rounded the corner onto Sea Beach Drive, which was just as painful to look at from my new vantage point. However, I saw someone else on a bike, which was somewhat uplifting 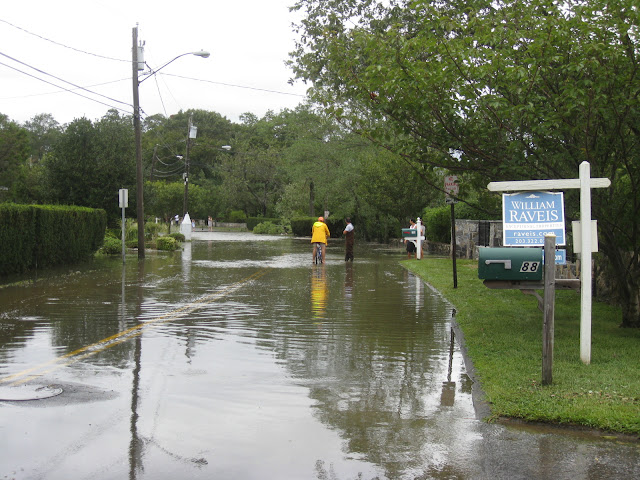 I continued on Ocean Drive East, past Connecticut Governor Dan Malloy's old house (not nearly as nice as his political enemies would have you believe) and eventually came to see some more storm damage. 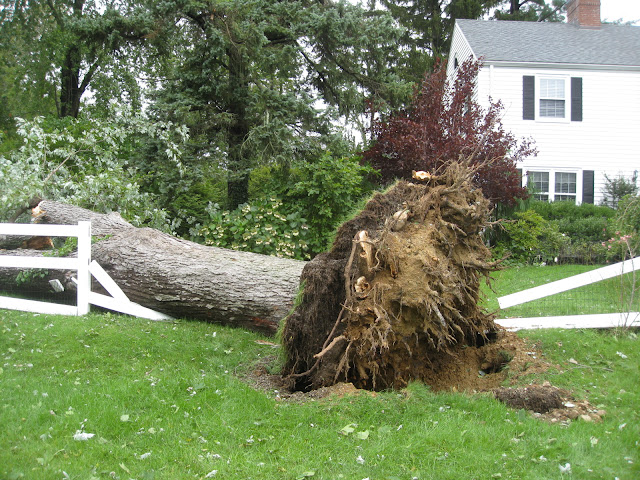 There was a police officer stationed at the far end of Ocean Drive East preventing traffic from entering the last section of Shippan Avenue; possibly to keep gawkers from trying to get a view of the ill-tempered Long Island Sound. But there wasn't an office at the end of Stamford Avenue, which is where I saw that several people had crossed a barricade (on foot) to look out toward Long Island. 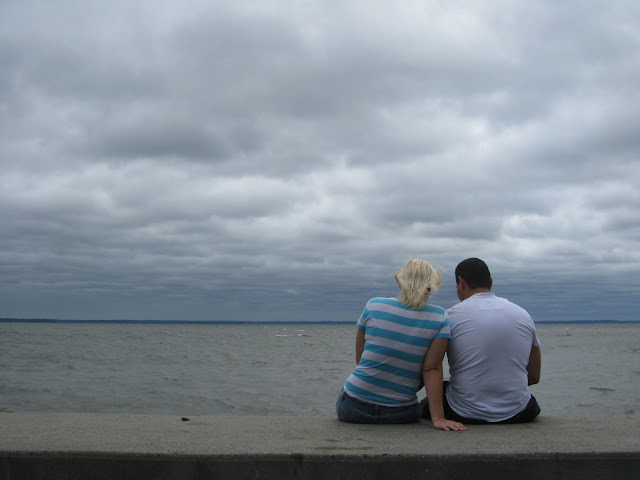 I sadly found more flooding on Saddle Rock Road, which is a dead end. 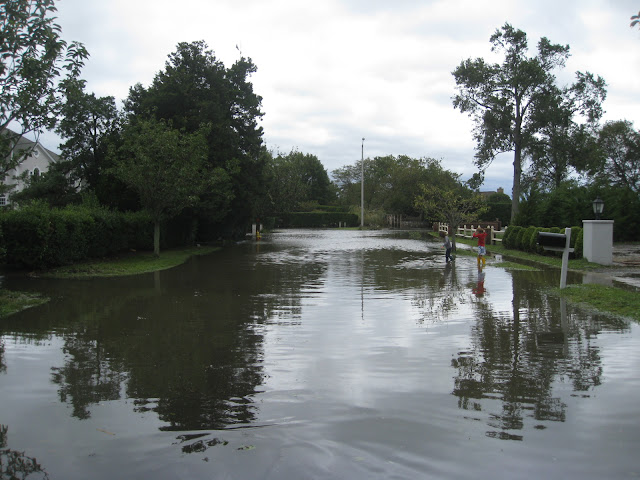 I turned down Rogers and came to a flooded section of road I thought I could safely ford. Mindful of the expensive electric saw in the rear basket, I proceeded across slowly. 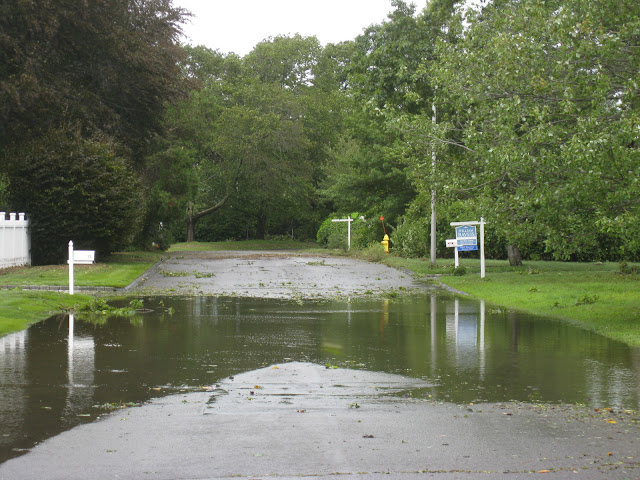 When I made it to the other side, I noticed water gushing out of a manhole cover opening. Not a good sign, I thought. 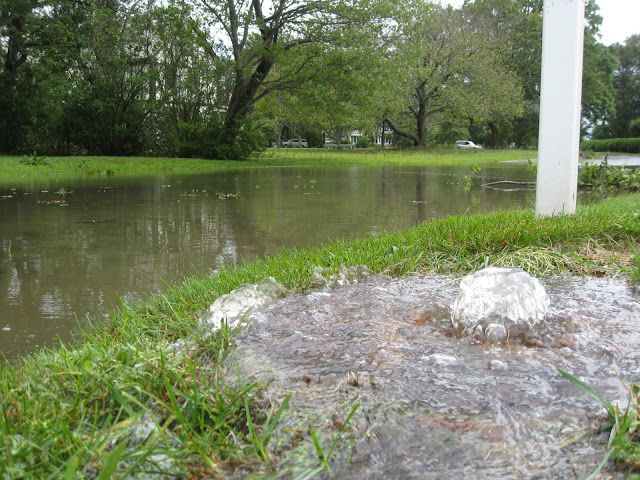 I continued further down Ocean Drive West until my route was blocked. Noticing the power lines, I didn't dare go further. 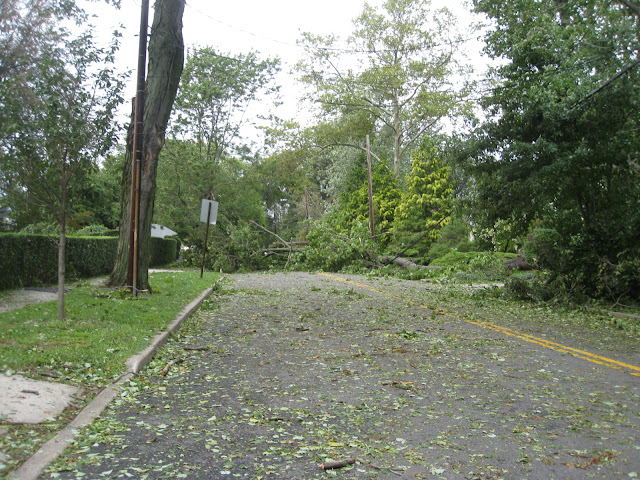 Even though some sections of the neighborhood looked untouched, plenty weren't and I could hear chainsaws and generators as I pushed down on the tiny pedals. Since I had the saw with me I stopped to offer help to a guy clearing an impossibly large tree from his porch, but he declined with thanks. Later, when I came across a road that was almost completely blocked by a tree, I looked around to make sure there were no power lines about and then dismounted the bike to clear enough of the branches away so cars could get through. Once I did that though, I got tired (the wind had awoken me at four) so I headed home. I realized that if I forget the origin of the bike, it actually served a decent purpose in the wake of Hurricane Irene.

One last thing: you know the statue called “Neighbors” at the entrance of Shippan Point that shows two war wives consoling one another? It stood tall through it all. I liked that, so what you see below is what I sent to the Stamford Advocate. 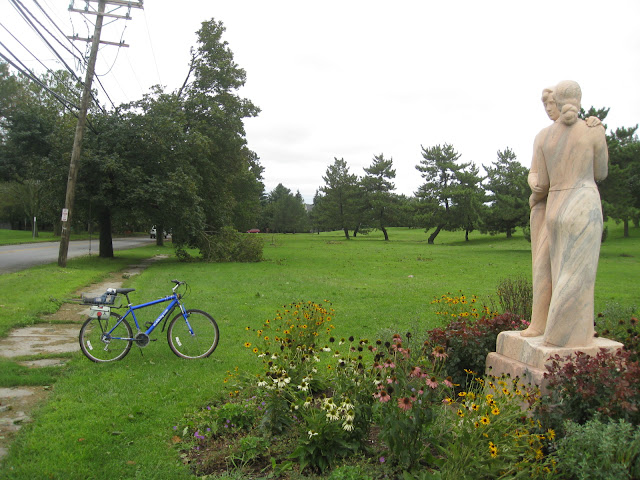 Email ThisBlogThis!Share to TwitterShare to FacebookShare to Pinterest
Labels: Hurricane Irene, Saved from the Scrapheap