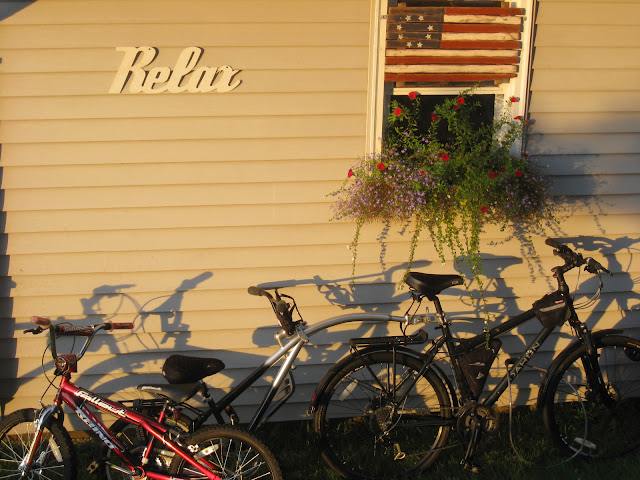 So I got to visit my parents in Mystic over the weekend for the big family reunion. There's a lot of great traditions there which include, but are not limited to, my dad's BBQ (pulled pork, which is first cooked for eight hours) my grandmother's coffee cake (origin story unknown) and mountain biking at Bluff Point State Park.

Bluff Point State Park and riding there with my cousin is what inspired me to build a mountain bike in the first place. So I brought it with me. I also brought an extra mountain bike for a family member from Arizona to use, the Dahon Matrix and the tandem attachment. The Honda Element was packed and the mountain bike got to ride in the prime spot on the special bike rack I made. I also crammed in our clothes, bike tools and my Park Tool PCS-9/PCS-12 hybrid.

Since I'm a morning person and many of my extended family members are not, I found a different crew to go biking at Bluff Point State Park than usual: my wife, my older sister and my 8-year-old niece, Sophie.

My sister brought her own bike and so did Sophie. Since my wife didn't bring hers that meant the tandem would have to get involved. So we detached it from the Dahon and, when we arrived at Bluff Point, attached it to the mountain bike - something I had never done before.

The expectation was that we'd ride the two miles or so to the bluffs, where I'd detach the tandem and go riding on my own and finally see what my creation could do. So I brought my usual seatpost along in the usual manner. 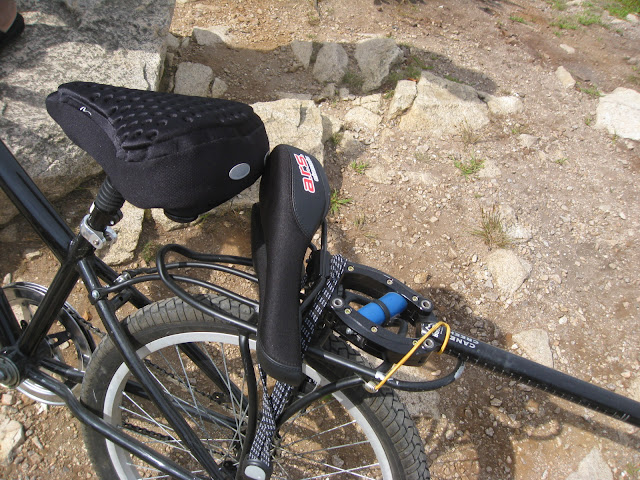 My wife and I did okay on the mountain bike with the tandem attached, but because the mountain bike frame was larger than that of the Matrix, I had some trouble getting on and off. Sophie did well on her little dirt bike and even though she wanted to stop frequently, we made it to one of the great wonders of the Connecticut shoreline. 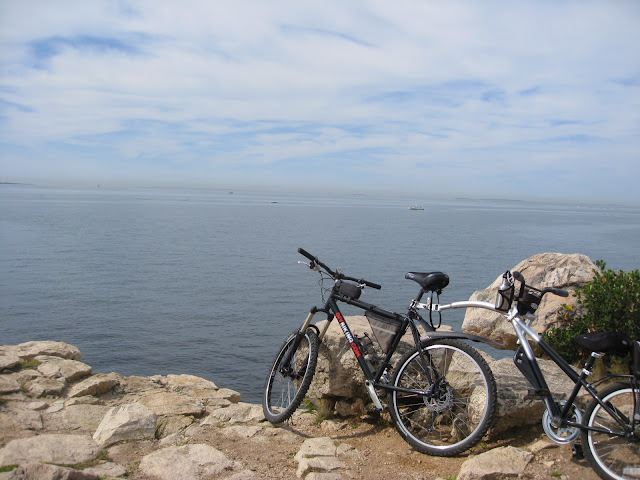 My wife brought her sketchbook along and I thought she, my sister and my niece would hang out and admire the view for a while so I could really put the hammer down on my new mountain bike. I wanted to watch the speedometer numbers climb. I wanted to watch the trees blaze by me like an Endor effects shot from Return of the Jedi. I wanted to feel like Tony Stark when he finally figured out how to use the Iron Man suit. I wanted to...

"Sophie, do you want to go biking with your uncle on the tandem?"

The forest moon would have to wait.

After a slight seat adjustment, my 8-year-old niece was able to sit comfortably on the tandem. This was new experience for me: my parent's first grandchild on a modified tandem attached to a homemade and slightly unproven mountain bike. I adjusted the rearview mirror on my helmet to make sure Sophie wouldn't bounce off the seat into the woods on a bump.

First we walked from the bluffs to the trail, and while walking Sophie asked about the bike.

"Did you build this?"

We mounted the tandem and set off carefully using the tried-and-true method of me saying "ready, set, go!" before pushing the pedals. The tandem setup starts slowly and rides slowly, but I soon found I had an enthusiastic pedaling partner. I could both see her pedaling and feel the effects of it, and on the first difficult hill I told her to be "the motor" and to pedal as hard as possible. She did so, and on each subsequent hill she'd ask if she needed to "be the motor" in the sort of voice children use to ask for ice cream.

I wasn't sure how long we'd ride, but in minutes I decided that Sophie would be up to riding the entire length of the fire road encircling the park. She had ridden her little dirt bike about 1.6 miles to the bluffs and I knew we could (probably) ride another three or four. I kept asking her if she was okay and she kept assuring me that she was.

After I got used to riding with her on the back and we had cleared most of the hills, we settled in on our ride. We talked about our favorite colors, she talked about her eyeglasses (and every time we hit a bump I'd check to make sure they were still on her face since my sister would never let me hear the end of it if they broke).

We made it down the hill back to the start of the loop (the trip assured me I had adjusted the disc brakes properly) and I floated the idea of heading to the car to get my wife's cycling gloves. That would add about a mile to the trip. Sophie assured me she was up for it so we headed back down the trail toward the entrance to the park.

"Is that the parking lot?" Sophie asked.
"Yes."

"Are we going to ride all the way to the car?"

I watched for cars moving in and out of spaces and we made it to the Element. When we stopped, Sophie held the tandem up to keep it from falling while I looked for my wife's gloves. Soon we got back on and headed back to the bluffs, a little under four miles after we set off (those are tandem miles). We promptly rested and enjoyed the park. 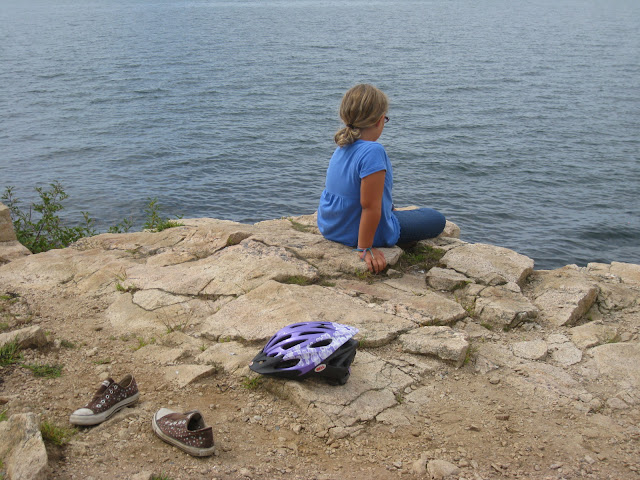 Sophie talked enthusiastically about the ride and how much she enjoyed riding on the tandem. And even though the Cane Creek Thudbuster seat just clattered on the rear rack the whole time, I felt that my first bike ride at Bluff Point State Park was a fun one. End to end it was seven miles, and when else but during a family reunion do I get to ride with my 8-year-old niece? 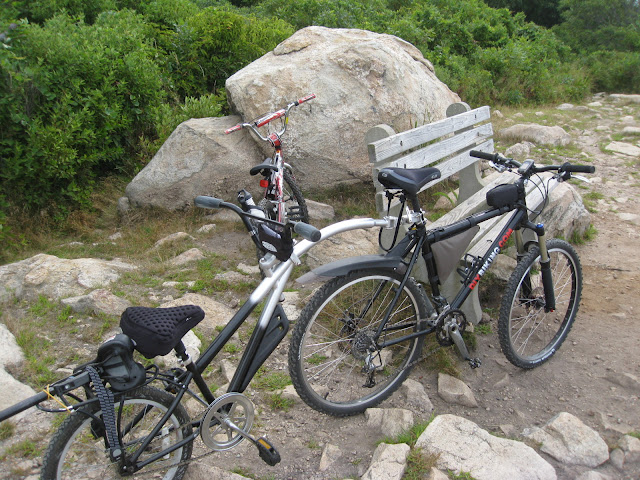