Folding Bike Week: "You rode here on THAT?!" Places to buy bikes this weekend

I'm only going to say this once: If you are looking for a folding bike that is versatile, blazingly fast, easy to ride, incredibly sturdy and remarkably safe...look no further. 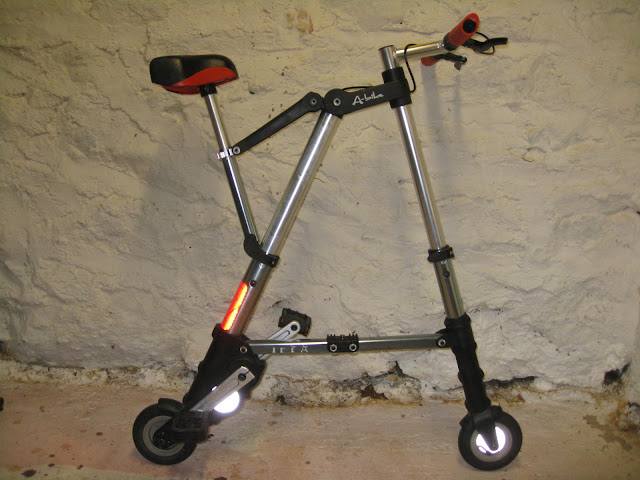 I wish I had a story something along the lines of: "I was browsing silly things on Amazon and my hand slipped and hit the 'Buy It Now' button." But I can't. I bought this on purpose: a genuine (or knockoff) A-bike.

At the time I didn't own a folding bike at all, and this bike was a very low price. I had bought my recumbent from eBay having never ridden any sort of recumbent at all, so this leap of faith seemed no different.

When you ride this bike, you can actually feel it sway and flex beneath your weight, and there is a warning label near the handlebars suggesting dire consequences if a rider weighing more than 187 pounds were to sit on it. If you are at a stop and you push down on the pedal too hard, the bike will literally escape from beneath you and try to take off for the horizon.

Now it does have it's good points. Well, one good point: when it folds, it becomes very small. I mean, just look at it here: next to the back of my office bike for scale. 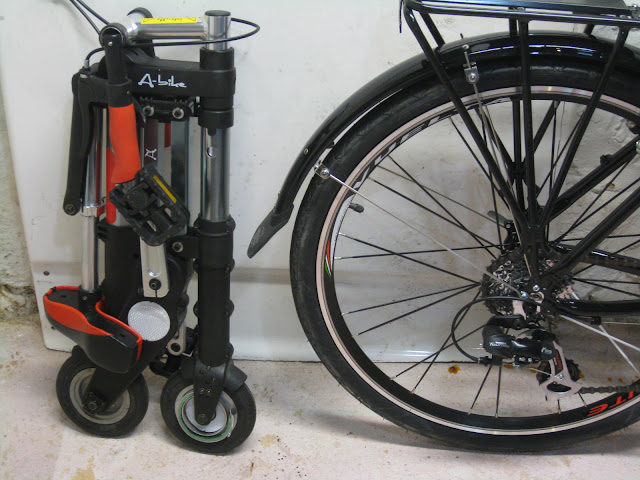 The picture of it folded on the Internet was what made me buy it in the first place. It looked like an amazing piece of engineering...that I could stow in a carry-on bag.

If you don't mind the danger of shopping cart-sized wheels or riding without dignity, it works. I've used the bike before dawn to ride to the Stamford station (saving $9.00 in a cab fare every time) before a few flights. I've brought it through airport security in its little bag and nobody has ever said anything - possibly because it may look a bit like a stroller going through the X-ray machine.

In Houston, Texas I also used it to ride around one morning. It creaked like a haunted house over the uneven pavement and since the seat was likely designed by a person who never sat down, it wasn't comfortable. But it was still a bike. At one point an elderly gentleman asked "what in d-heck kind of contraption is dat?"

In Portland, Oregon, I used it to shave time off my trip to my wife's hotel by getting off public transport and riding it across the city. I was stared at a lot, and you know your bike is strange when you are being stared at in Portland, Oregon.

You'd think I'd have brought it on Amtrak to Washington D.C. but I don't dare for fear the employees of the Consumer Product Safety Commission would give chase bearing pitchforks and torches.

Of course, I ultimately bought the Dahon Matrix and have rarely used the A-bike since. After all, the Matrix has 26" wheels and 24 speeds while the 13-pound A-bike has 6" wheels and one speed. The wheels are also notoriously difficult to inflate to their 90 PSI capacity. You need a screwdriver just to pry the valve away from the wheel...and then you have to screw on TWO valve extenders in order to use a pump. 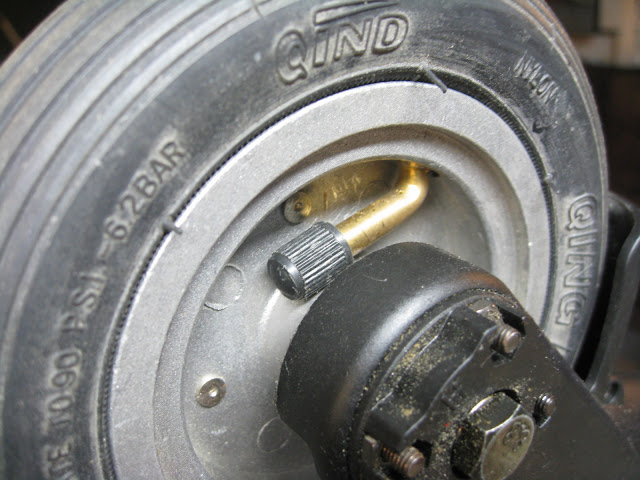 Since the Matrix doesn't look like a folding bike I decided the A-bike would be a good way to promote Folding Bike Week...and allow me to ride around Stamford and find better folding bikes that YOU can buy.

As you're well aware, I like to build the DIYBIKING.COM brand while riding but the A-bike doesn't have a rear rack. I didn't let that stop me. 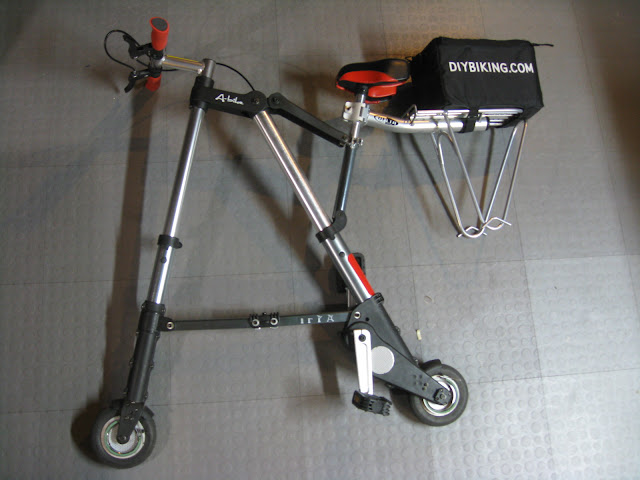 As you can see, I used my detachable seatpost rack on the A-Bike and attached my Cannondale bag with iron-on letters that I used for my Portugal trip. I decided not to use the orange Plano box I had converted to a bike box because I thought it would look strange.

It did interfere with the folding ability, though, but I didn't think I'd have trouble bringing it on Metro North anyway. 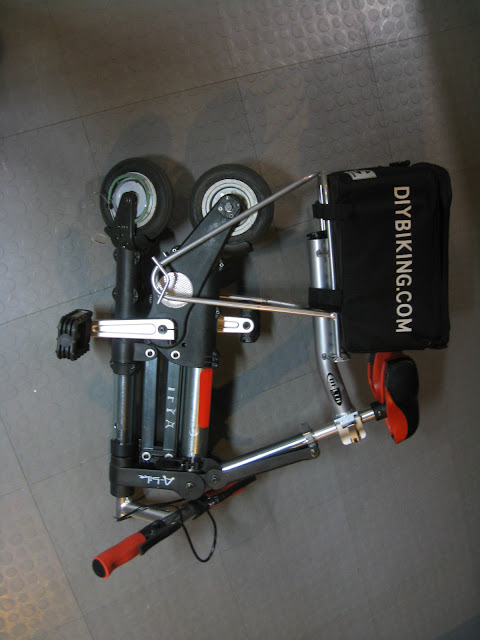 I put on my padded bike shorts (padded shorts are a must on this thing), jersey, helmet, socks and sneakers before putting on my REI pack to set off. I hardly put anything in the trunk bag as I feared the bike would flip over backwards. 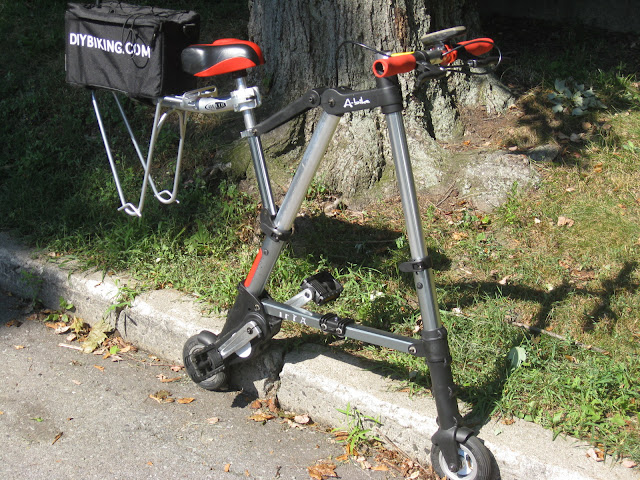 It goes without saying I also put my temporary mount for my Garmin bike GPS so I could see just how far I could ride before I either fell into a pothole or abandoned the A-bike for one of the other folders I'd see on the trip.

I almost regretted taking a ride to New Canaan and back earlier that morning on one of my...what's the word...superior bikes, because the contrast with the A-bike was rather sharp. It flexed more than I remembered. The rear drum brake wasn't working well. Every pebble on the pavement threatened me and the bike...but in less than 3/4 of a mile, we were at our first destination. 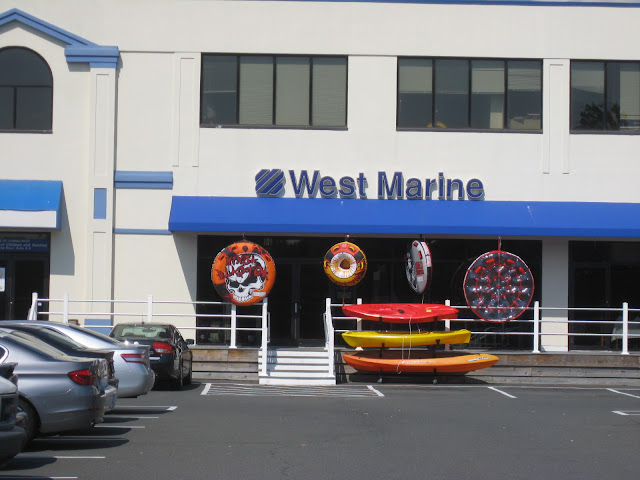 Yes, West Marine at 401 Shippan Avenue (right next to Spazzio's restaurant). When I arrived I remembered another advantage of the A-bike: when you get to your destination you can just carry it inside. The friendly woman at the register greeted me as I wheeled it in.

"Do you have any folding bikes?" I asked.

"We sure do," she said, looking at the A-bike with a furrowed brow. "Are you looking for something with bigger wheels?"

I gave her a friendly smirk...and a DIYBIKING.COM business card along with an explanation of what I was doing with a pitch of Folding Bike Week. She led me to the two folding bikes they have in stock. 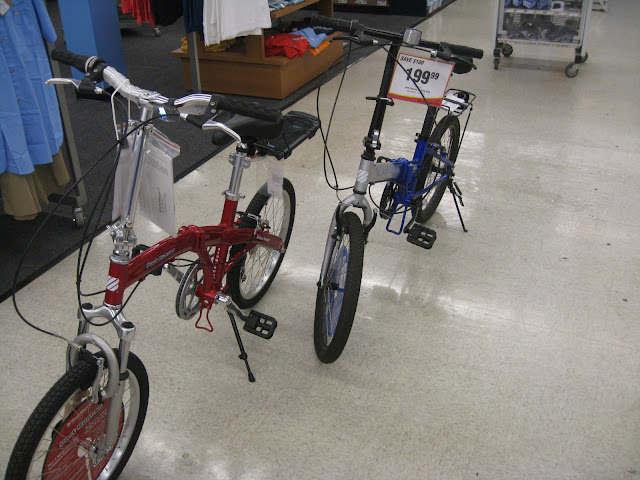 The red bike is a Port Runner II which is listed here at $399.99, while the Jetty Express behind it is on sale for $199...so if you want a budget folding bike this weekend that's a definitive option.

I left the store and pedaled off, nearly dislocating my entire skeleton on the threshold between Shippan Avenue and the parking lot. I thought about the Jetty Express and momentarily debated going back to buy it for the rest of the trip.

I didn't, and after a few twists, turns, and a (probable) sarcastic cheer from a fellow driving a battered pickup truck, I arrived at Danny's Cycles' Stamford location at 850 East Main Street. 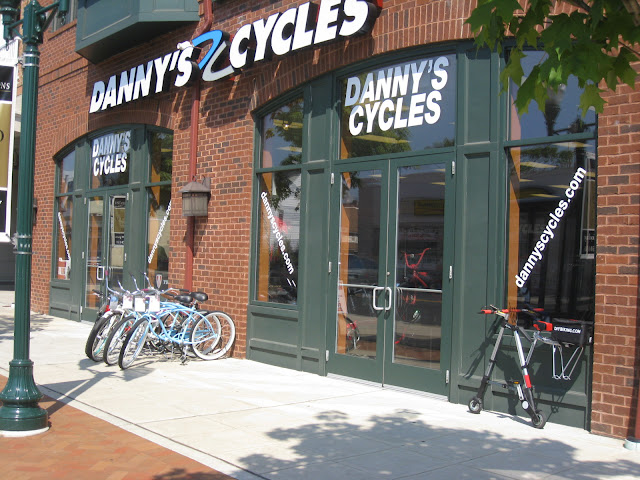 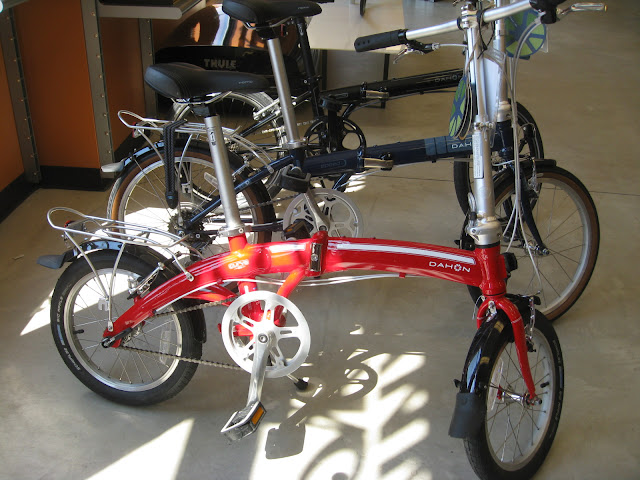 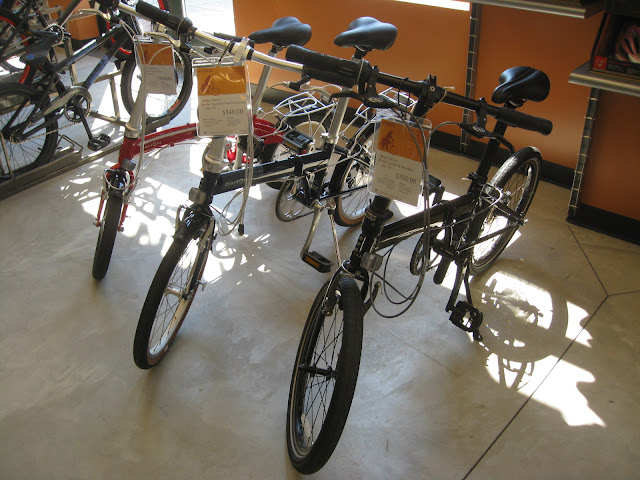 Two employees came out to admire (who am I kidding...take a look at) the A-bike. I gave them a short demonstration of how it works by riding it past their tool and pedal selection. I would have stayed longer to talk bikes and look at their good mix of non-folding inventory, but I had one more place to go: Pacific Swim Bike Run.

I pedaled back on Route 1 the way I came, passing under the Metro North train tracks before taking a right on Myrtle Avenue. I rode over the uneven pavement at the A-bike's cruising speed - 9 miles an hour - and past Colony Grill and stopped at the traffic light at the Elm Street intersection.

As I pedaled through, the bike shook violently (or, rather, more violently that in does over normal operation) and I felt a recurring thud coming from the back tire. I headed to the sidewalk across from Donut Delight and looked down in dismay.

I had no pump and no patch kit. Even if I had both of those things it wouldn't have mattered because I also needed a couple of different kinds of screwdrivers and wrenches to take the rear wheel apart. Only about a mile from home, I decided to walk...mostly along Magee Avenue. 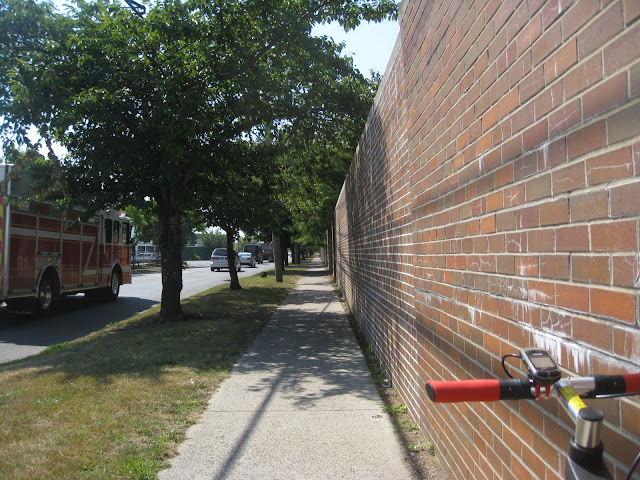 I knew this would keep me from going on Metro North to visit Greenwich Bicycles before lunch, but I still wanted to visit Pacific Swim Bike Run, which is less than two miles from my house. So upon getting home, I changed my equipment. 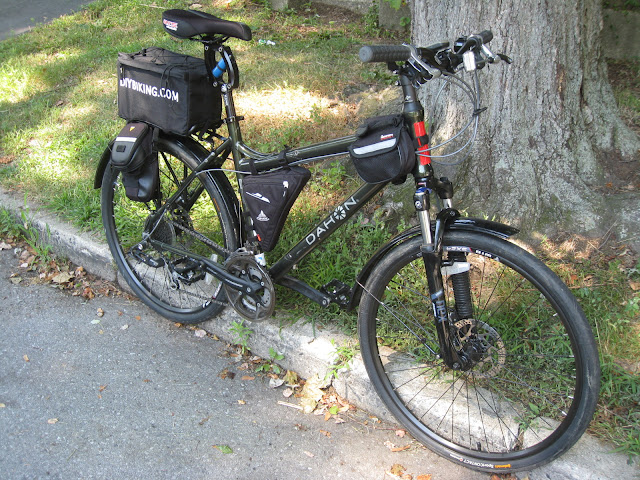 I set off on the Matrix. Long pedal strokes, a smooth ride, several speeds and responsive brakes. This was more like it.

Within minutes, I had arrived at Pacific Swim Bike Run, which is at 575 Pacific Street. 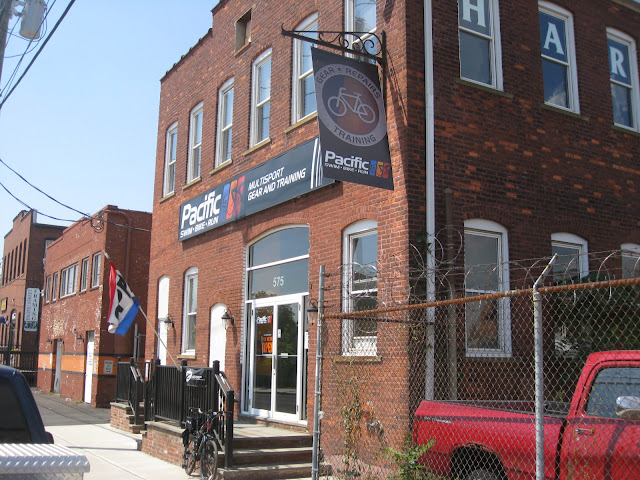 I headed around the back of the building, stepped carefully around a dog sleeping just inside the door, and headed inside.

I should point out that when I'm in most triathlete stores/training centers I feel like a member of Average Joe's visiting Globo Gym. Not this store. They obviously take bikes and training very seriously, but Julie, the owner, is very nice and so is the staff. In addition, they have a few things in inventory that make me smile. 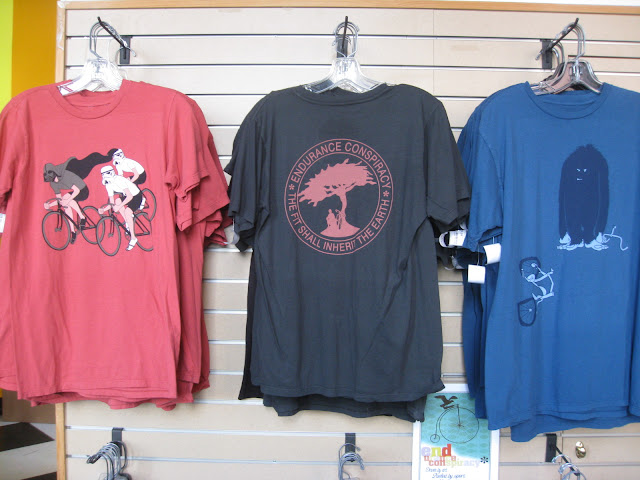 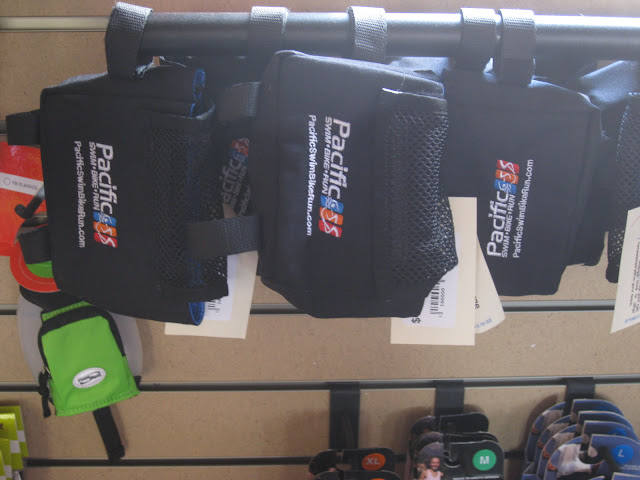 Julie told me they didn't carry folding bicyles. I wasn't too surprised as I had guessed there isn't much local demand for collapsible triathlon bikes. I did learn that they are having a big bike sale this weekend, so if non-folding bikes like this are your thing, you should check this beautiful store out. 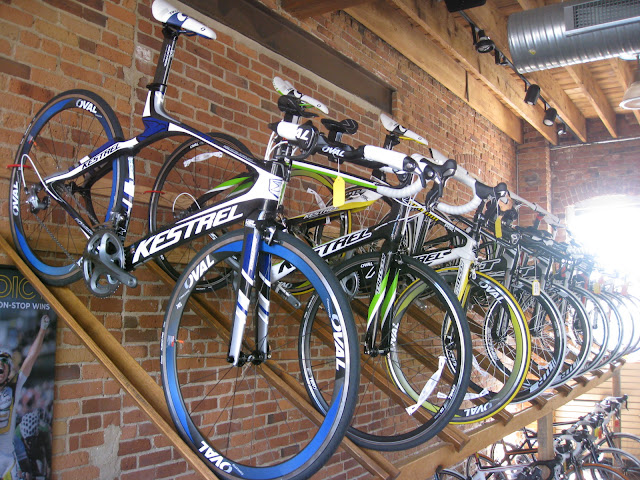 I headed home and quickly made a plan to visit Greenwich Bicycles in the afternoon. I understand they have an electric assist bike there called the Dahon Boost. Sounds like something I need to see. 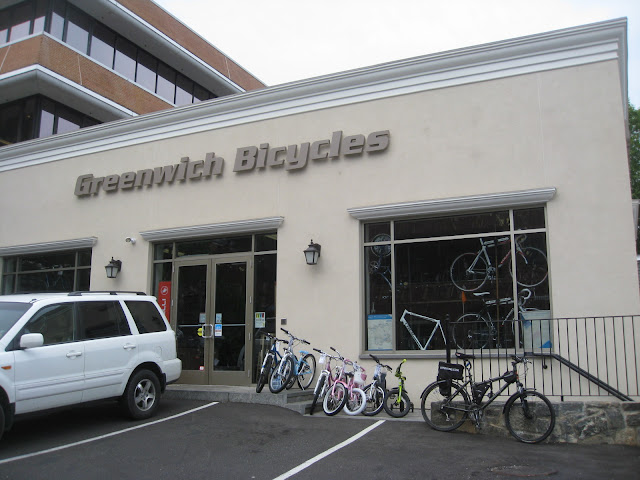 I didn't make it to Greenwich Bicycles until the following afternoon (the A-bike's tire letting go really messed up my schedule) but it was good to take my Dahon Matrix back to the store from which it had come. Well, actually, no, because between August 2009 and this afternoon Greenwich Bicycles had moved to its new location: 35 Amogerone Crossway.

I took the Matrix there via Metro North and rode past a Ferrari with temporary tags to make it to Rob's shop. Thoughtfully, I carried an empty pack so I could do a little shopping.

But I was mainly there to say hello and to check out the Dahon Boost. All I have to say is...whoa. 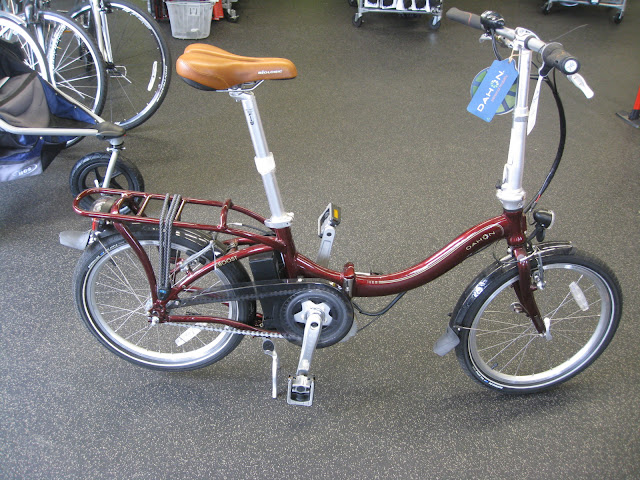 This bike really made me think about the mission of Folding Bike Week: to present the average person with the mystery and the wonder of folding bikes and truly showcase the incredible variety. The two extremes are represented in this post: between a $120 A-bike with 6" wheels...and a $2,749.99 Dahon Boost...the truth lies.

If it's closer to a Boost for you I don't blame you: It's heavier than the Matrix at 43.1 pounds but that is actually not a lot when you consider you can ride quite a number of miles with the electric assist and literally not break a sweat. 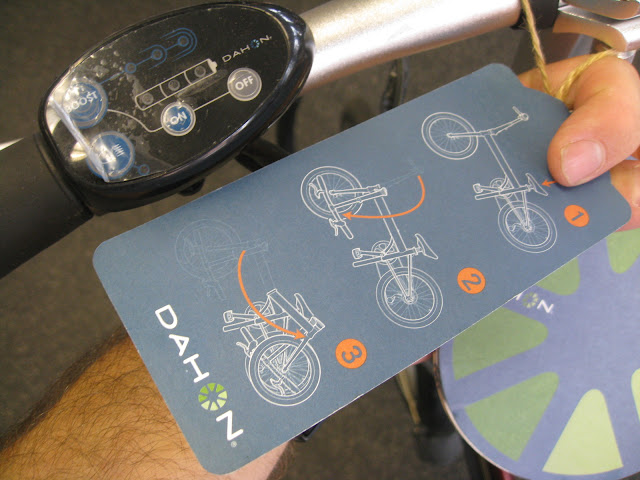 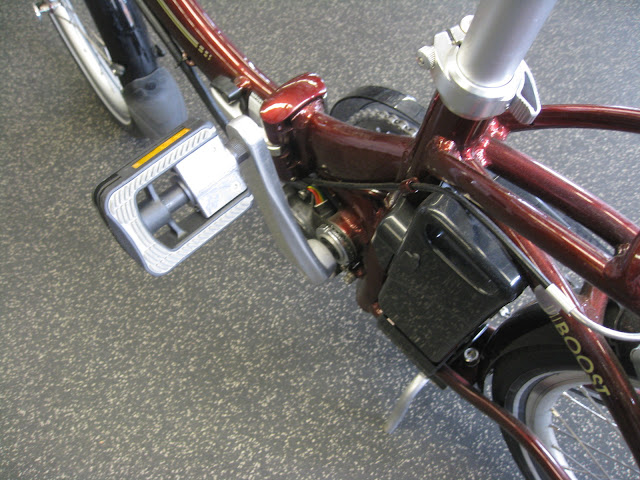 A beautiful bike, and it will clearly suit someone very well: gas is $4.15 a gallon in Stamford, and who knows how much it is these days to park a car at the train station.

I browsed in the shop, bought a few things, and headed back to the station not quite able to believe Folding Bike Week, like Shark Week, was coming to a close so soon.

As I was getting on the 4:28 train to Stamford, someone got off at the Greenwich station with (I am not kidding) a Dahon Boost. 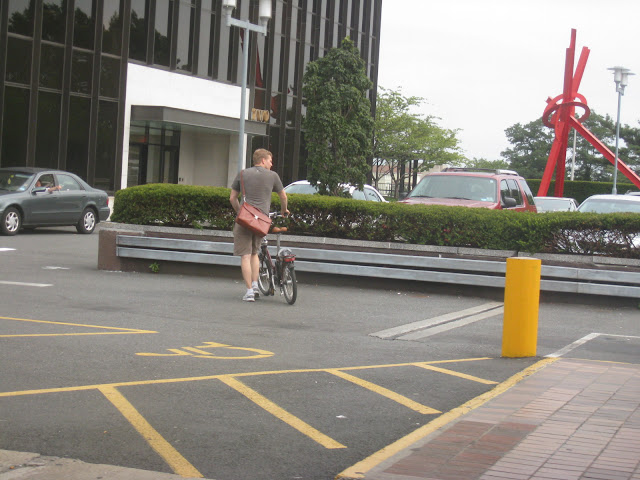