Keeping A Bike At Work: Things To Remember

After completing a particularly difficult project at work last year, I bought this: an office bike. 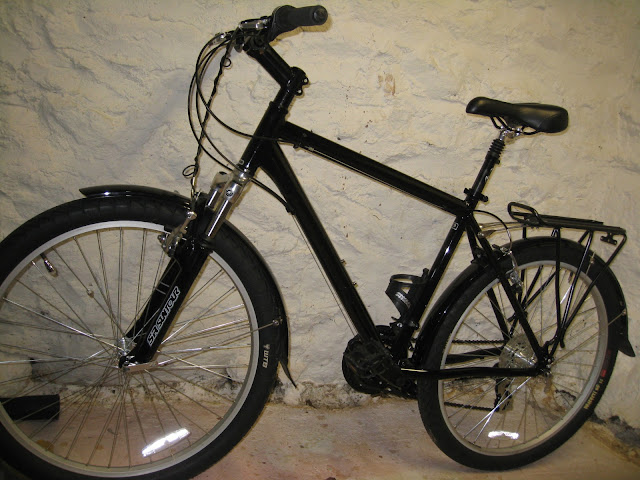 This is Nashbar AT-1, the RC Cola of mountain bikes. A list price of $299 but I got it for well under $200 thanks to some careful shopping. I added the Planet Bike Freddy Fenders, the rear rack, a cheap suspension seatpost and a bottle holder from Profile Design. For a bike to leave in the office, it's perfect: it's simple, it's functional, it won't dirty your business casual attire when you pedal off for lunch, and it's inexpensive.

For a few years I kept a very old, very rusty Diamondback Sorrento in the office. It was useful for running short errands in Stamford, but it wasn't comfortable. It was so battered it looked dirty even when it was clean, and often when I'd try to take it onto the elevator and people saw me with it, they'd start hitting the 'close doors' button, pretend they wouldn't see me, or I'd get the old "I'll take the next one" line if they were approaching the elevator with me in it.

Though the new bike looks good, I bought it for me and it did borrow two things from the old Diamondback: the bike computer, and the placement of the Profile Design cage. I never found another bottle cage quite like it: it's a plastic material, but the wide opening at the top means it can hold a large coffee or some other drink.

Unable to leave well enough alone with the bike, I did change the wheels into 2.2" wide slick tires, thinking the mountain tread on the other ones were unnecessary for city riding and the slick tires would be smoother, faster and more comfortable.

They weren't any of those three things.

No matter how I mounted or inflated the tires, they never seemed to sit true on the rims, and sometimes they had so many lumps the tires looked like they were digesting small animals. They were also very heavy, and trying to cram a trip somewhere on a lunch hour was getting to be a real task. They did soak up the bumps okay, but if you're riding slow, you feel the bumps a whole lot more. Something needed to change.

So, one day, I stumbled across these wheels, which were sold on closeout and were a great use of the birthday money my grandmother had given me: 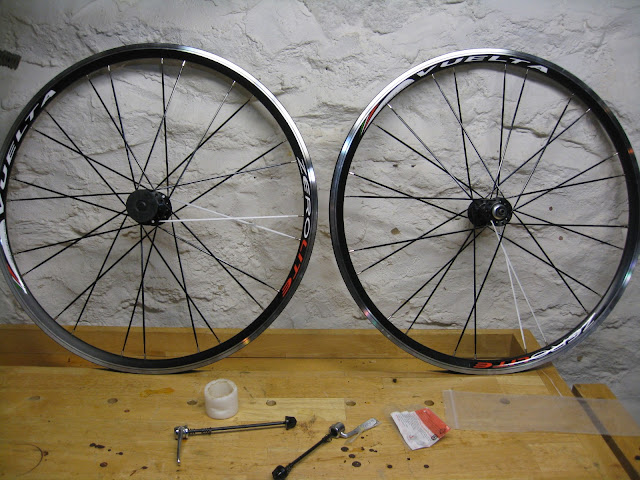 I had an extra set of 1.5 inch tires for my Dahon Matrix that I thought would work perfect for these, plus a couple of new 26" bike tubes. I was set to go, but to my dismay I realized the wheels were built for skinny Presta valves instead of Schrader, and the latter wouldn't fit through the openings.

I do not own anything that has a Presta valve, but I do possess a Ryobi One+ cordless drill and have a pretty steady drillin' hand, so I carefully widened the holes a bit so the Schrader valves would fit through.

Amazingly, the rest of the wheel came together quite well, and the contrast was quite striking. 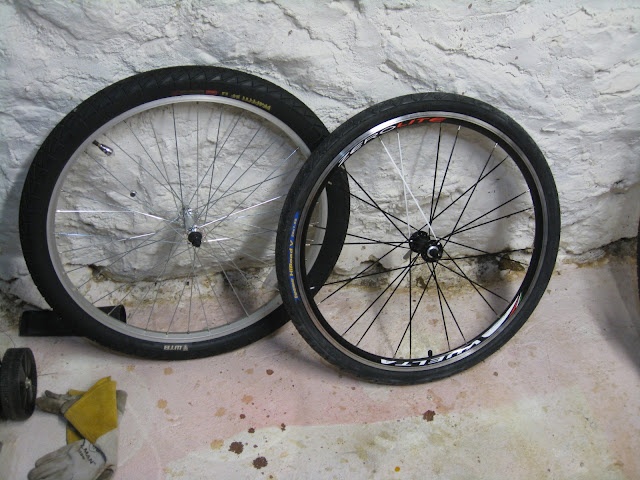 There was another bonus to this changeover: I could get rid of the bizarre rear cassette that had come with the AT-1. It's shown here through the new rear wheel: 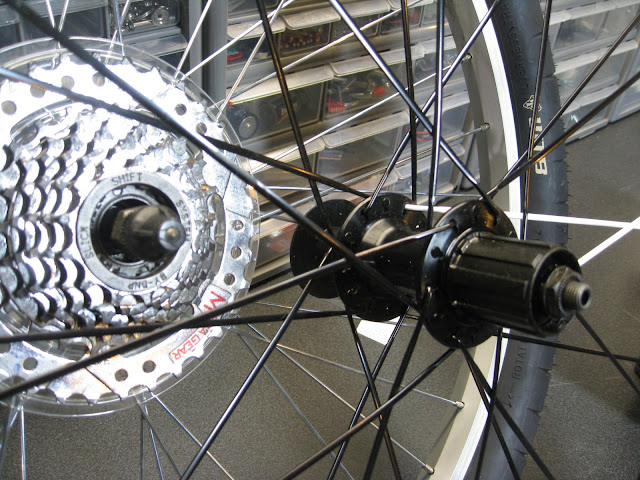 The red letters on the huge gear reads, appropriately enough, MEGAGEAR. If my office was on the top of Lombard Street in San Francisco and my favorite restaurant was on the bottom, I may have seen the need to keep it. For the new wheel, a more normal cassette would work (and I couldn't figure out how to remove the cassette from the AT-1 wheel anyway).

Swiftly, I ran into a problem: the cassette I had in a drawer would slide easily into place, but if left a gap. So I found a random gear to slide on first to use as a spacer. 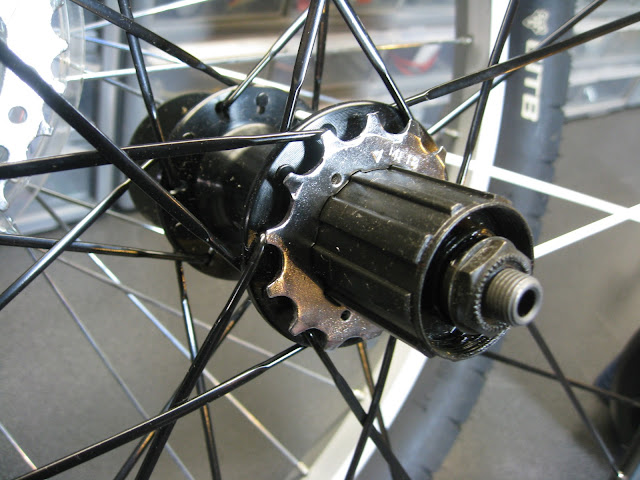 After that was done, I slid the cassette on and twisted the round nut on tightly. I didn't have a tool for this (is there one?) so I used my fingers. 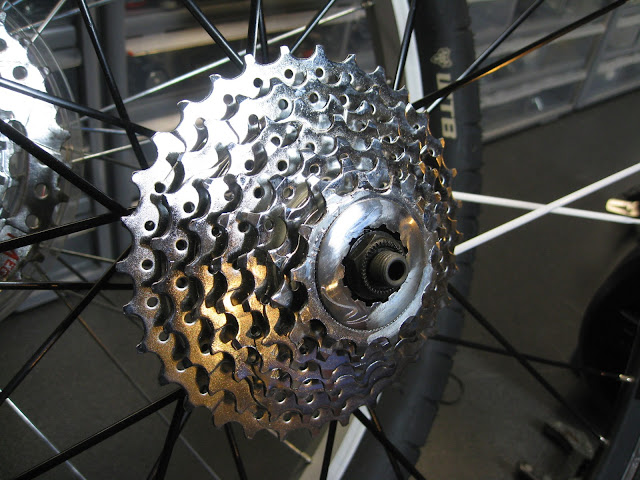 Once I put the quick release axles on, I put the wheels on the bike and hooked the caliper brakes back up.

But when I was done, I ended up with this: 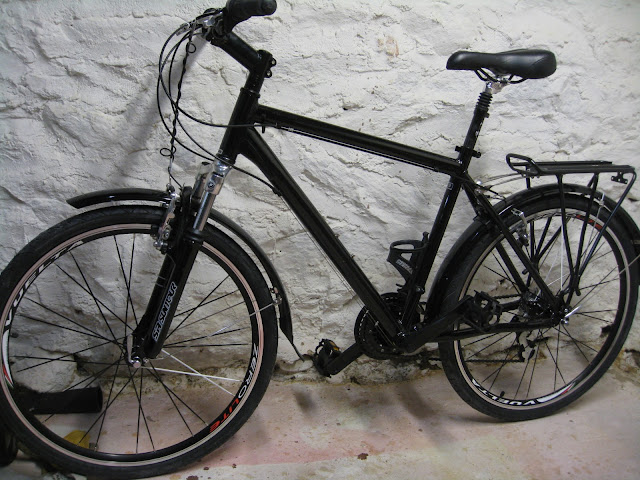 It's lighter with the new wheels (thanks, grandma!). And you may not have noticed, but it looks good. It it perfectly at home on the streets of Stamford or leaning against the wall of my office next to the rented plant. Unlike the old Diamondback, this is a bike that oozes professionalism and impresses visiting colleagues and clients.

I feel the bumps more, but I don't care because it goes so much faster; this was one of the times I was glad to trade some comfort for a lot more speed. Remember that an office bike needs to do a lot in a short amount of time so it's a good trade-off to make.

I can run errands further away from the office on my lunch break than before - which means I'll use my car less and save more gasoline over time; the birthday money wheels cost less than a tank-and-a-half of regular unleaded at the BP station near my house.

Only problem I had with it my first day riding: the bike computer wasn't working. I couldn't figure out if it was a loose connection or the thing had an electrical problem, but then I remembered: I left the little spoke magnet that crosses the sensor on the old wheel. It's actually visible in the third photo; right between the valve and the axle. I knew I had forgotten something.