When I moved into my house, it came with a crude workbench in the basement that was bolted to the concrete floor. I imagine it was original to the house (built in the early 1920) and it quickly became a problem: it wasn't big enough, the space wasn't practical, and I couldn't move it where I wanted it to be.

For a while I puzzled how to get it out (the bolts couldn't be unbolted or cut) until I hit upon a solution: I had a red, six-ton bottle jack and I simply placed it on the floor on a piece of 2 X 4 and just cranked it up. Before long, there was a POP! and the workbench left its prison (leaving a fist-size hole in the floor I filled in with Waterplug cement).

When I moved it away from the floor, I realized I probably wasn't the first person who disliked the workspace: I found a small, hand carved wooden toy boat between the back of the workbench and the wall. I imagine some guy, possibly in the 1940s, was listening to Orsen Welles doing 'The Shadow' radio program, got distracted by a commercial for Blue Coal and accidentally dropped the boat behind the workbench. Unable to retrieve it, he couldn't give it as a gift to his son,who today is probably in a retirement home thinking how much better his life would have been if he was more interested in boats.

My point is: with a bad workbench, nobody wins. If your home comes with a workbench that doesn't work for you, get rid of it at all costs.

Now the only reason I didn't post a picture of the boat hull is this: I couldn't find it. I even stopped typing this for a good 20 minutes so I could search the shop, but no luck. My pursuit of an organized workshop goes on, and it goes through many phases. Below is phase one: 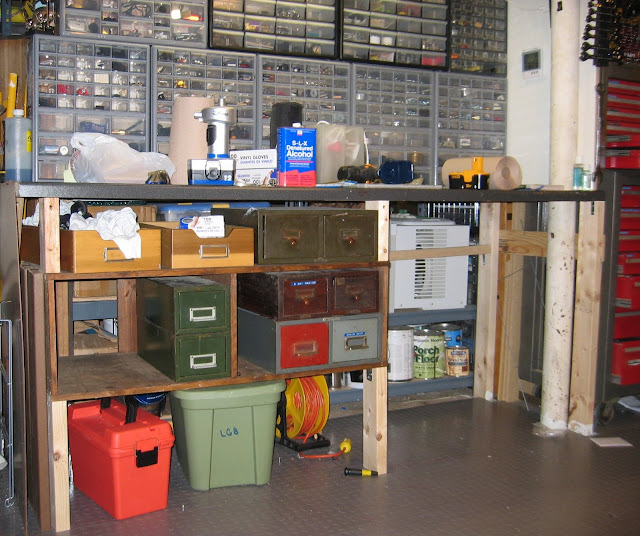 Bear in mind, this is what REPLACED the 1920s built-in workbench that I had deemed useless: We've got a piece of IKEA furniture (it had been a coffee table-ish thing with wheels at one point) and a gray countertop bought from IKEA for $9.99 - their 'as is' section is a goldmine from time to time - and a bunch of plastic sorters piled on top. As I just said, I can't find the little wooden boat, so the workshop is a lot less organized than it looks.

Pay attention to the metal two-drawer cabinets in the middle. They are mismatched and were picked up at a variety of tag sales, and one day I happened to find nine identical ones (painted beige) at a sale in New York state. I thought they'd make a much more attractive workbench if I painted them.

So since I had recently taken up welding (much, much more on this later) I decided to try and weld a metal frame to hold all nine of the metal cabinets and tuck them under the same IKEA $9.99 countertop. Welding experts who look at the picture below: please remember, I am new at this. 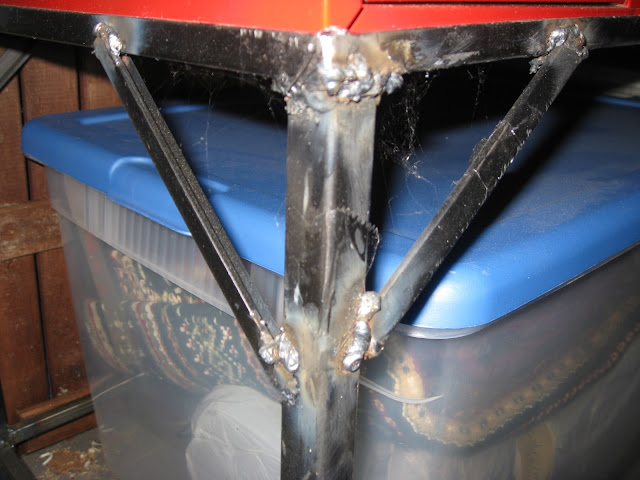 Okay, so it isn't pretty to look at, but it's fairly strong. I just wouldn't move it or jump up and down on it or anything like that.

The metal framework in place (if I knew how to make clean, pretty welds...and measured properly...it would have made a very nice coffee table) I set to work on the metal cabinets. I set them down and spray painted them red. Before long, I was able to carefully slide it into place (all without moving the IKEA $9.99 counter too much). 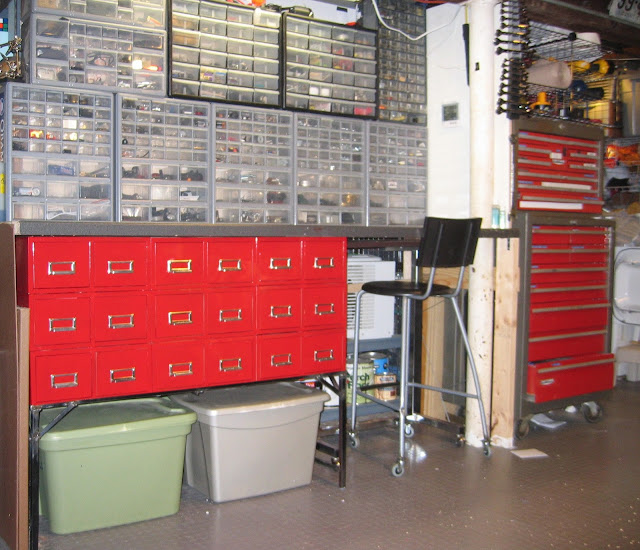 The red really matches the metal rolling cabinet my dad gave me years ago, doesn't it? I was very satisfied with what I had done. I just can't put very large tools in the drawers.

If you're still making fun of my welds, take a careful look at the cheap IKEA (yes, IKEA again) bar stool on wheels. It didn't come that way. I welded those wheels there years ago and none have broken off.

One valuable lesson in case you want to embark on a project like this: if you don't have enough drop cloth, go buy some more. Otherwise, you will end up the floor of your workshop looking like this: 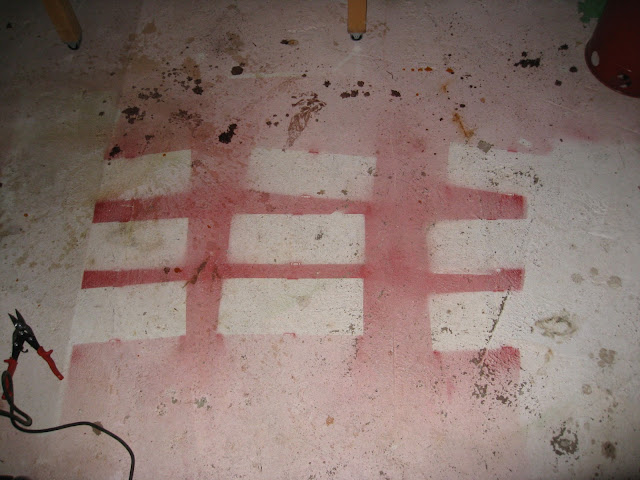