A Tandem in Branford

The coastal town of Branford, Connecticut is a stop on the Shore Line East or about an hour (by car) from Stamford if I-95 is in a good mood.

My wife wanted to take a trip there and do some biking together, and we decided to take...the tandem, which, as you can see from the photograph, looks an awful lot like my Dahon Matrix with a slightly modified trail-a-bike attached: 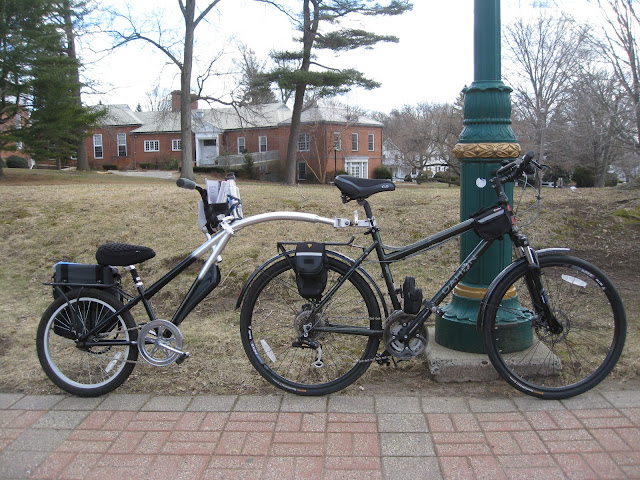 If you have a petite spouse/riding partner, it isn't a bad setup: as you can see I added a bigger chainring for the trail-a-bike for greater speed, a comfortable seat with a suspension seatpost, comfort-gel grips, a rear rack and a bottle holder. I also welded the detachable part to itself so there's very little play or vibration when we're moving. And, unlike a normal tandem, it fits in a car easily.

For this setup I sacrifice my Cane Creek Thudbuster for a solid seatpost which is semi-permanently attached to the trail-a-bike. It's not built for the races, for sure, but it's a nice way to take a meandering ride through a scenic town, and my wife planned to paint and sketch the shoreline once we were to arrive at Stony Creek; about eight miles from where we parked on the main thoroughfare.

We parked just across from a nice looking row of shops, and I took an inventory of possible places to stop for a snack before we set off. 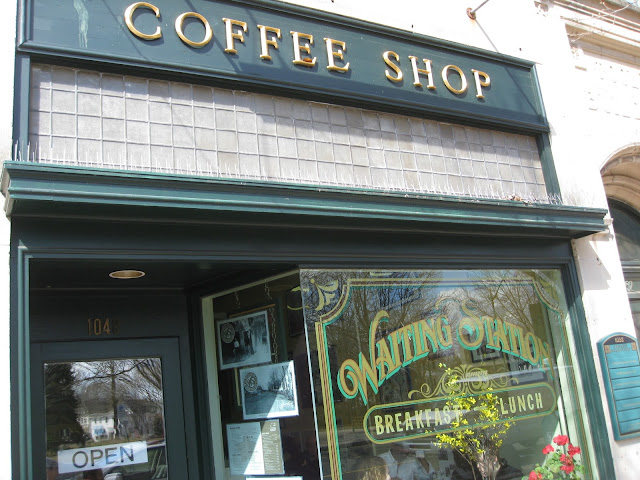 The tandem does rather well in straightaways and level ground, and we mostly had both of those conditions as we rolled into a marina to check out the boats. Like I had discovered in my trip to Rowayton, the marina was deserted and just about every boat was still out of the water. 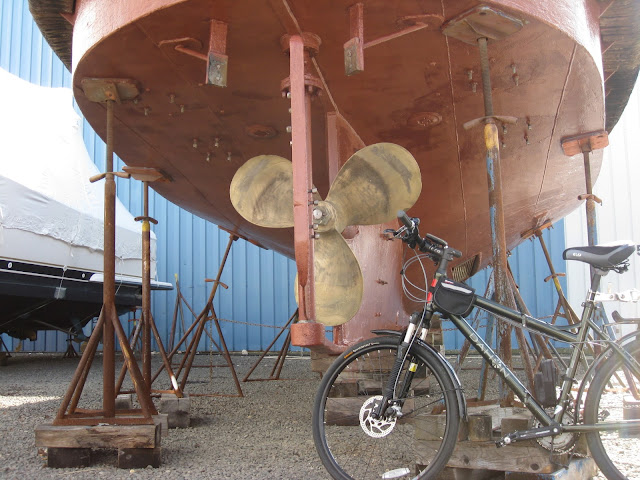 The closer we got to Stony Creek, the more shoreline we got to see. 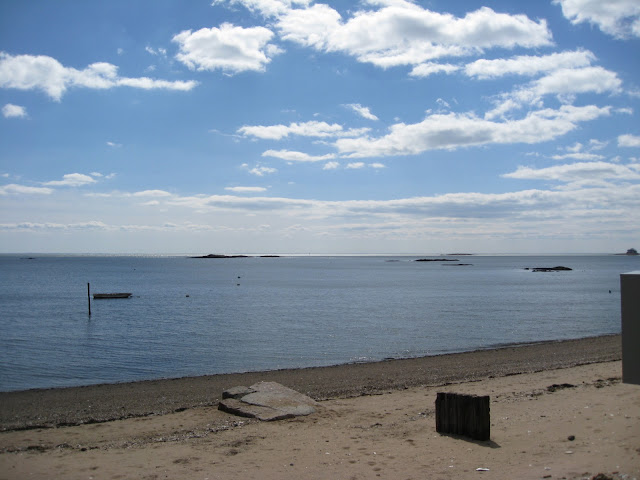 The tandem does best on level ground, but neither of us were prepared for the hills: the tandem part has only one speed and the pedals do not have toe clips (and for reasons I cannot fathom I didn't bring my clipless pedals for the Dahon).

Despite the physical challenge, we eventually made it to scenic Stony Creek. 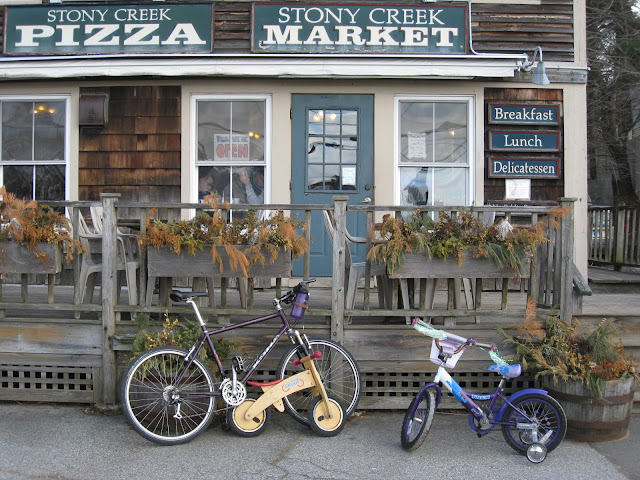 We pedaled out to the dock to see a ferry take off for the Thimble Islands. 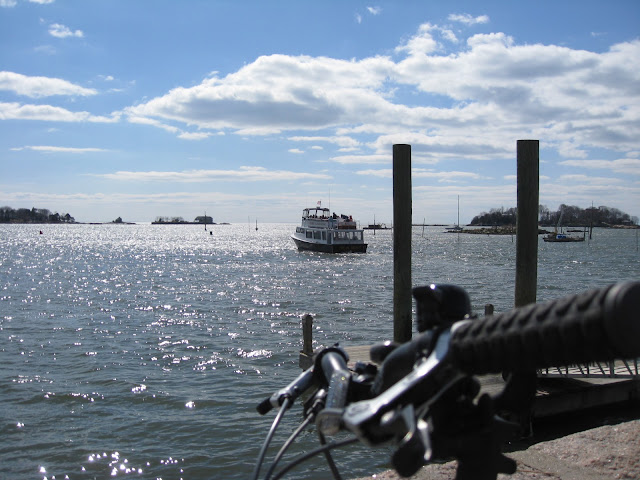 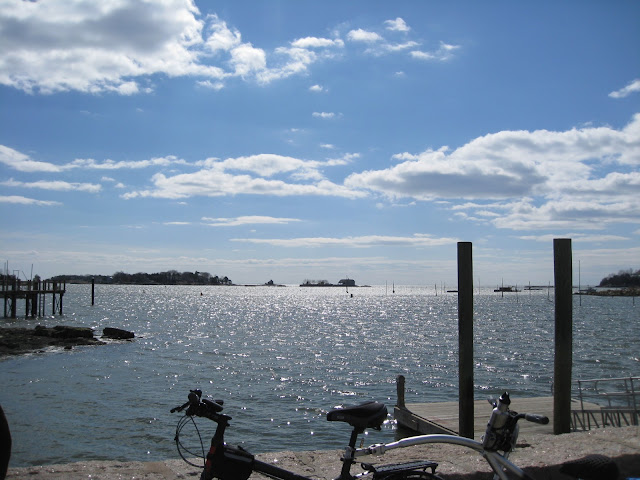 My wife wanted to stop for a while and sketch. Meanwhile, I was interested in taking off on my own to check out a metal bridge I could see off in the distance.

In the past when we've taken the tandem out for a Couple's Ride/Sketching Session I've tucked the Dahon's good seat and seatpost into a saddlebags. Unfortunately, I couldn't find my saddlebags that morning (yeah, they are somewhere in the shop) and even though I brought along the much loved Thudbuster I left it in the car, parked eight miles away, because I never figured out how to bring it along.

Undaunted, I decided to allow my wife to sketch the shoreline and go biking with the empty tandem. She took off her water bottle and her kit bag on the back, and I rode it just so. 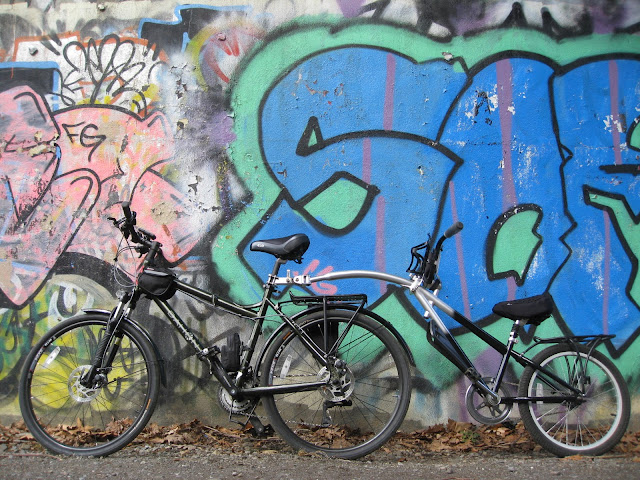 I find I get a couple of stares when I ride the tandem with nobody on the back. One day, I want to ride around alone on it with a frantic expression on my face and breathlessly ask passers-by: "Have you seen a little boy wandering around who answers to the name of Alvin...or Skip!?"

Since I wasn't in a playful mood, I just smiled at the cyclists and pedestrians I passed while I pedaled off to find the bridge. As it turned out I had stumbled across a real trail. 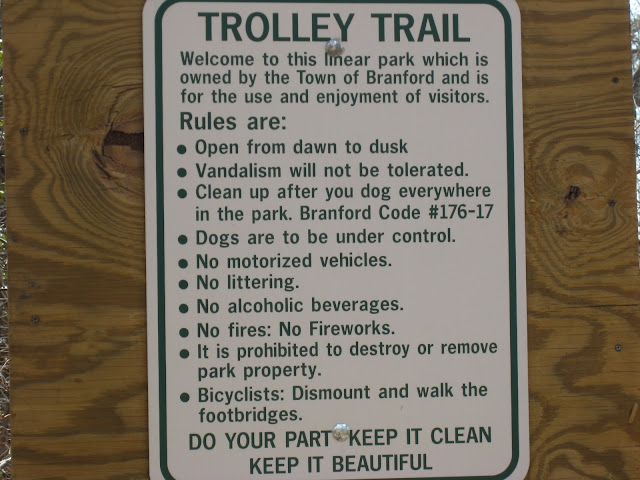 And before long, I came to the metal bridge. The Dahon did very well on the trail, and the empty tandem bounced and clattered over the bumps. 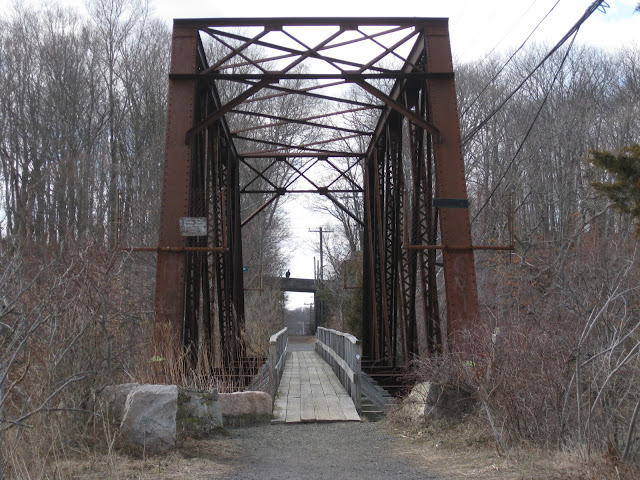 I disobeyed the last bullet point on the sign: I waited until no one was coming and then pedaled across the bridge. I stopped at the underpass up ahead to take a picture of the tandem in front of the graffiti wall. 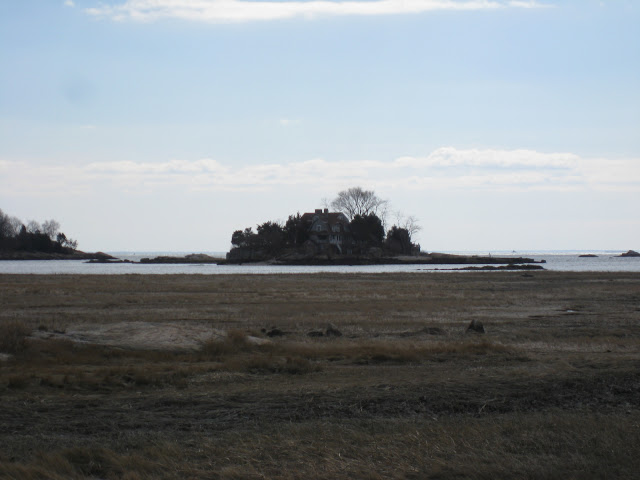 And finally, I came to another bridge. This one didn't look like it had been built for a train. 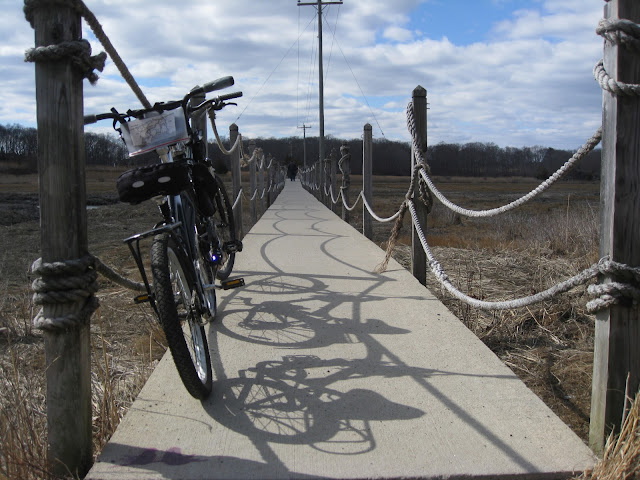 Given the large number of pedestrians, I decided to turn back and see if my wife had finished with her sketch. She did, and she colored it in later and posted it on her blog. 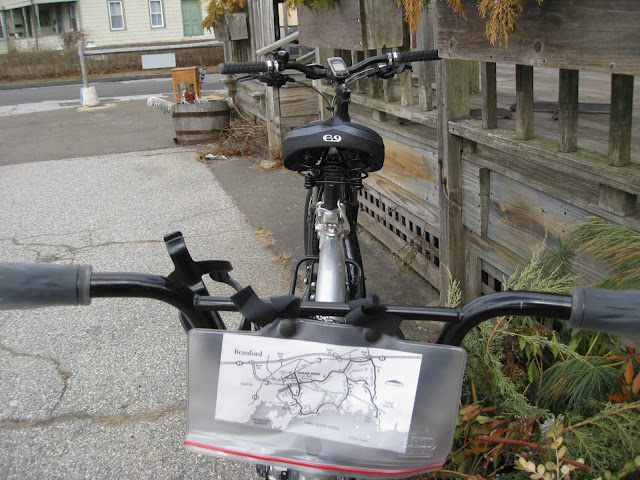 After finding our way back to to familiar territory in Branford, we stopped for a frozen yogurt milkshake at Ashley's Ice Cream. By the time we returned to the car and loaded up the tandem, it was 20 minutes to four on a Sunday, and that meant we had 20 minutes before Zane's Cycles would close. Luckiliy, the person behind the counter at Ashley's confirmed it was just a mile and a half away. When we drove up, I could tell right away this was my kind of shop. 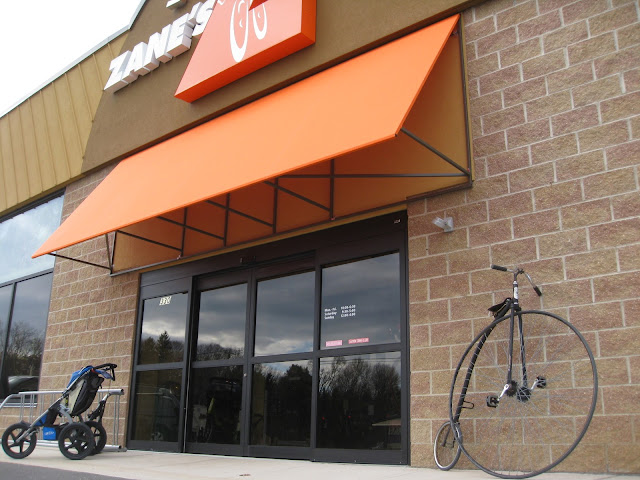 I barely had fifteen minutes to browse the store, chat with employees, and admire the selection. I even found a nice new set of handlegrips. Zane's is a great shop and I was glad we made it there before closing. I even struck up a conversation with a mechanic and told him about my blog and my status as a sub-amatuer welder. I then asked if he had any bike frames that were being thrown away I could use for practice. He then said, 'Hang on a minute' and he checked the back of the store.

And...I came home...with this! Look for it on a Saved From The Scrapheap post, and take a ride in Branford. 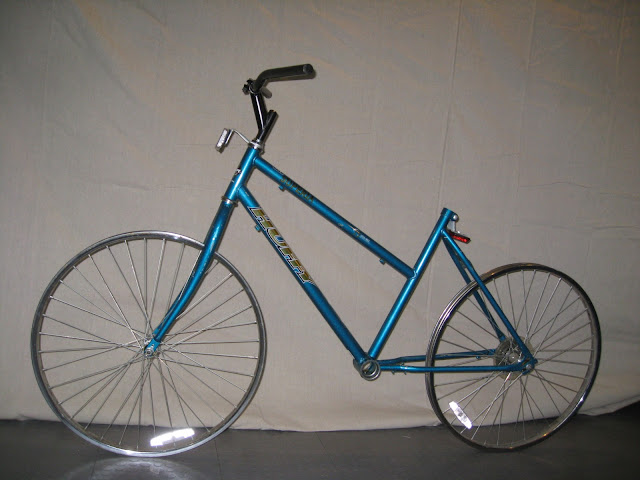