Are You Missing A Bike Light? (of course you are)

On a recent ride to New Canaan, I found this on the road. Naturally, I brought it home. 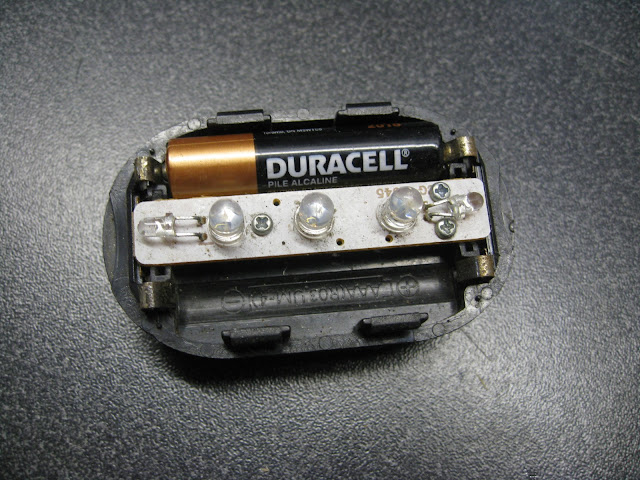 Even if you haven't ridden along Rt. 106 near the Merritt Parkway recently, check your bike to make sure you have your LED bike light or at least a rear reflector: not only does it keep you safe, but if things don't fall of bikes, how will any of us know where cyclists have been?

When I put in an additional AAA battery and pushed the button on the newfound light, it worked perfectly but I knew it would never go on a bike again without a lens. Then I remembered something: I had this: 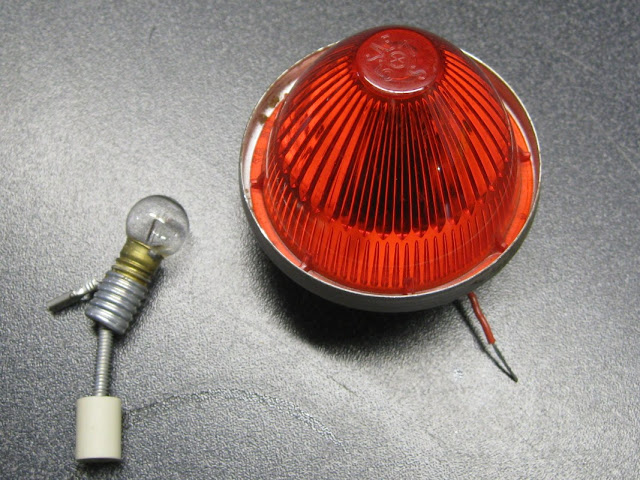 I don't have a good origin story for it. I think it is a taillight from an old motorcyle (possibly the nonworking 1962 Honda 50 Super Cub I owned once) but it had obviously been sitting about in one of my plastic bins marked 'lights' for some time. Popped apart, it looks like this: 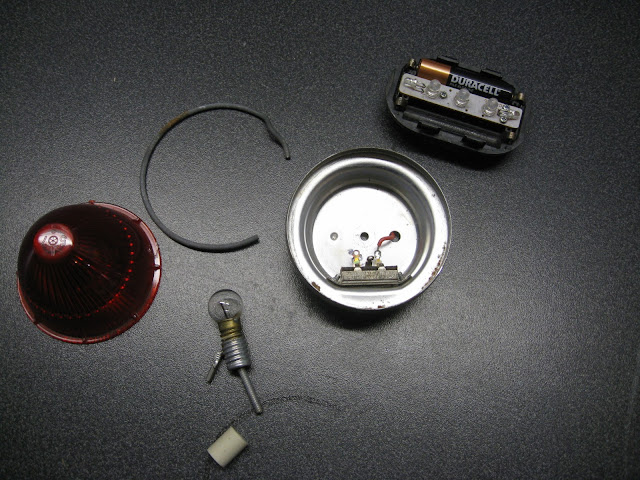 As you can see, it has a incandescent bulb (which I promptly removed) and I wondered if I could cram the works from the found bike light inside. I knew the battery compartment wouldn't fit, so I later went to Radio Shack to buy one.

The light mechanism itself, however, is quite tiny, and when hooked up to an old cordless phone battery, they worked like a charm. So far, so good. 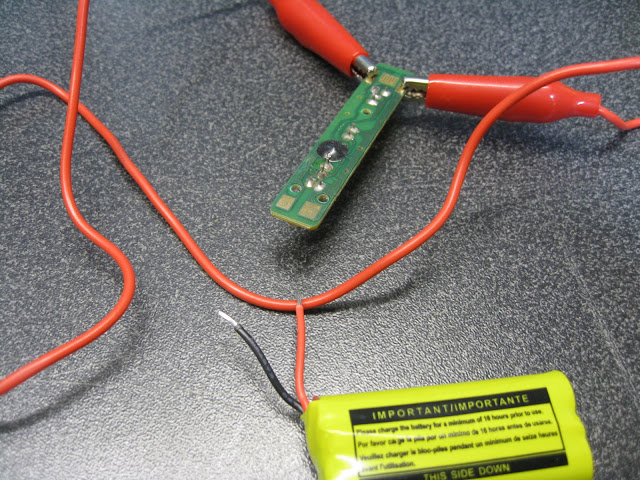 I also wanted to make the outside of the taillight housing look nicer and I hit upon what I thought was a cunning plan: instead of using a rotating wire brush head on the taillight, I decided to use a rotating taillight on a wire brush head (which I held with the hand that wasn't on the trigger of the Ryobi Cordless ONE+ drill. I'm not sure if you are familiar with Ryobi 18V cordless tools, but if I had the time or talent I'd write a folk song about them). 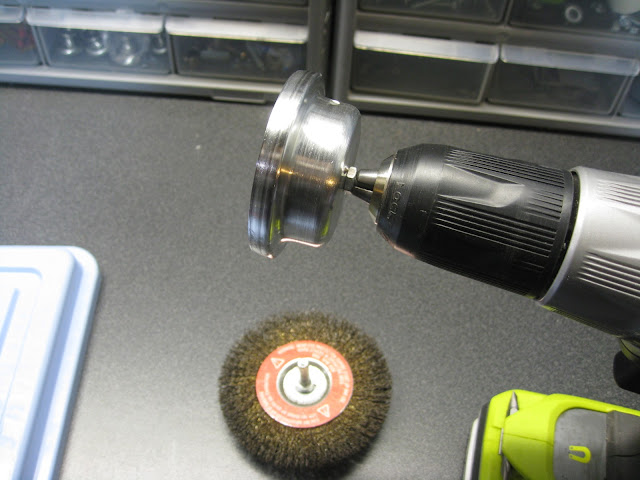 Coming up with that idea was the high point of this project. It was all downhill from there.

As we all know, the most diabolical projects always have enough easy steps to lull you into submission and make you bond with the project, and then there's the Rotating Taillight/Still Brush Head moment that makes you feel like the Smartest Guy in the Shop. Then things start to go wrong, and since you're now hooked to the project, you won't stop no matter how badly you are thwarted. 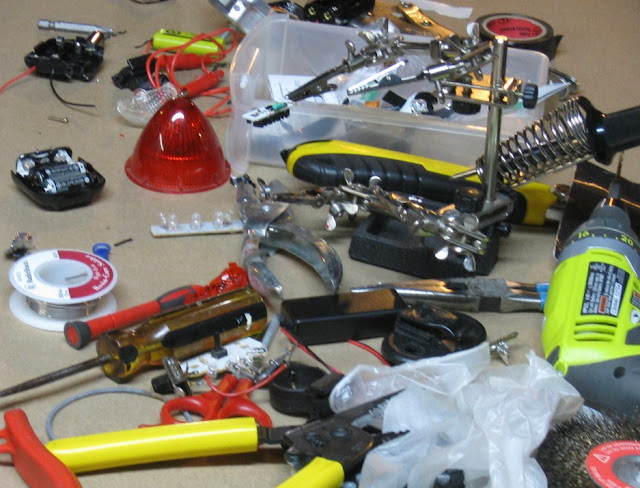 I ended up finding a solution to the problem: as it turns out, I had an old bike light already that took two 'N' batteries and it did fit in the taillight housing once I had removed the top and the lense. Once covered with aluminum tape, it proved to be highly reflective. Then I decided I wanted to use the big switch (visible in the third photo) so I sealed the existing switch with a well placed dab of solder.

After drilling the holes for the new switch wires - you can see the assembly, with the two 'N' batteries, just to the left of the taillight lens - I soldered them in place and carefully put it all back together. I threw the switch, and I had my light...but I didn't use the light I had found or even the stuff I bought at Radio Shack: finding the old light was just a muse of sorts, as it turned out, and it went into the Old Bike Light box. 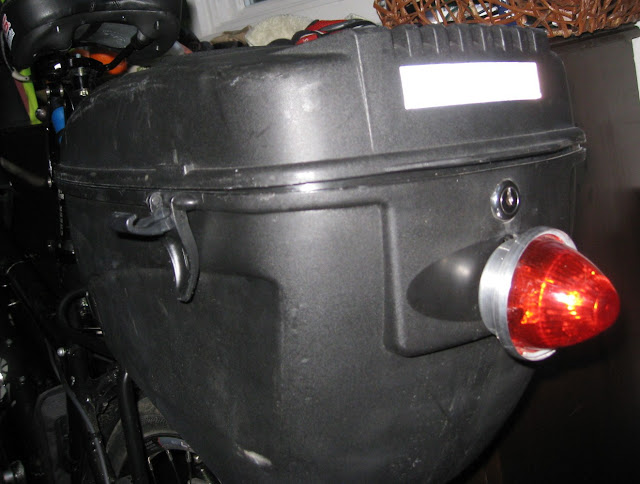 Here's the new taillight, attached to the plastic lockable trunk box I have which is big enough to hold a bike helmet, a netbook, and more (I can't remember the name of the manufacturer but it is similar to the Swagman Whee Pod but the Otivia CargoCache Trunk is probably even nicer). The photo doesn't do it justice: it's the bike from Pee Wee's Big Adventure meets...some other bicycle from some other movie (definitely not Quicksilver).

So it was a diverting project that took longer than I thought, but it had its moments and had a good result. It isn't likely to fall of the bike, but if it does, feel free to put it on yours.
Posted by Mike at 6:55 PM