The Donut Lover's Guide To Bicycle Commuting: When You're In Greenwich

When I bought my Honda Element five years ago October, I knew it would be the only car between my wife and I for the forseable future. So when I landed on the Element while searching for a new car, the closest dealership was in Greenwich, Connecticut; a very wealthy suburb of New York City that borders Stamford. Those facts put together meant that if I were to drop the car off for a service, the Metro North would have to be involved, and once I bought it the folding Dahon Matrix played a key role.

Early Tuesday morning, I put the Matrix into the car and drove down I-95 south to take the Arch Street exit into Greenwich. A few quick turns took me past the iconic Miller Motorcars of Greenwich where I peeked at the Bentleys, the Ferraris and the other cars without bike racks as cool as mine.  After I took the first left past Greenwich Avenue, I arrived at the Honda dealership where I promptly removed the Matrix and stepped in to fill out paperwork for the 60,000 mile service. 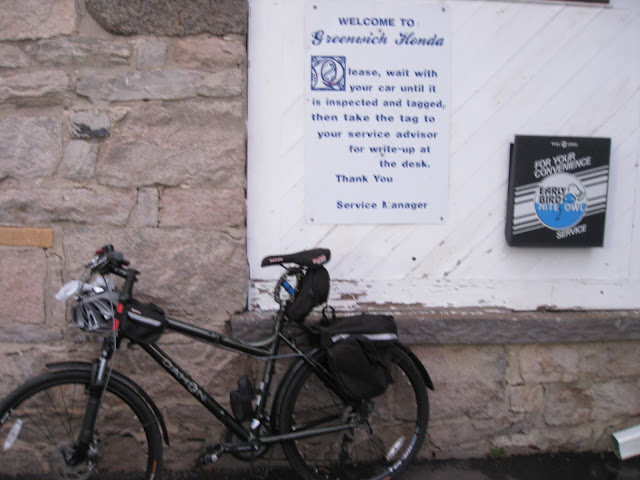 Once I was finished I got on the bike and pedaled back the way I came, but I didn't have to go far. The Greenwich train station is less than a 1/4 mile from the Honda place, and seeing that there was a nice deli called The Olive Branch just next to it and I knew I'd have to wait for my train, I decided to stop for a donut. 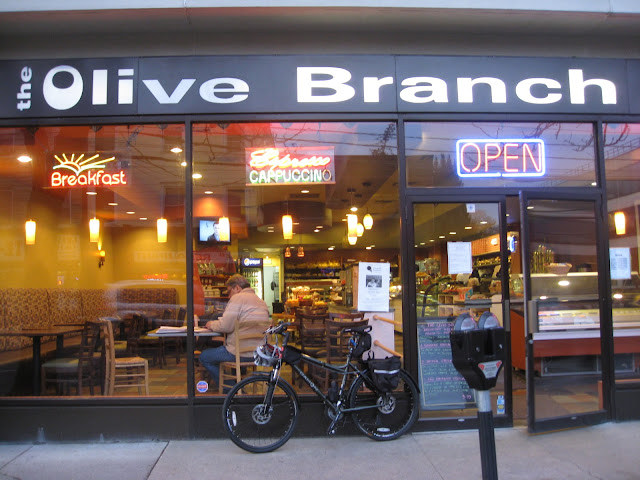 When I went inside though, I was in for a slight letdown: the man behind the counter amiably told me they didn't have donuts that day, so I had to settle on a blueberry muffin. As I found out later, the muffin was quite good, but if you favor donuts The Olive Branch in Greenwich may not be the most reliable option. But the place is so nice you'll feel like you can check for donuts frequently.

With the muffin in the Dahon's saddlebags, I pushed the bike into the station and carried it up the stairs to the platform, where I pushed it gently along, past the men and women waiting to get to work on the next New York bound train, to get to the elevator so I could cross to the other side of the tracks.

Once I got there, I pulled out the little hex wrench I have to carry with the Matrix and transformed the bike into its Metro-North friendly form. 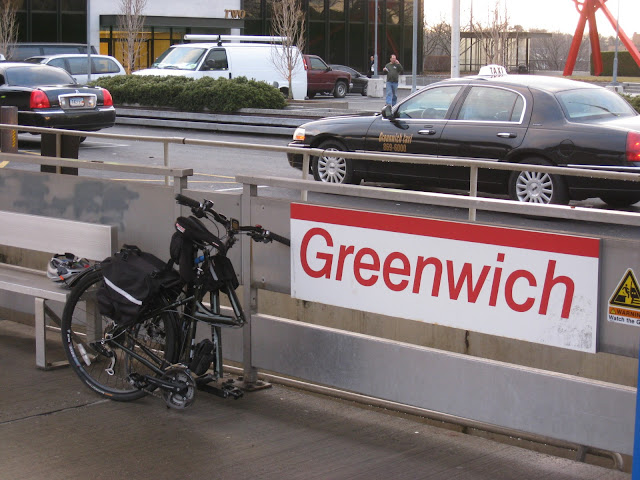 While I was waiting for my train, I paced up and down the platform just watching the morning, and I took a quick picture of the pedestrian bridge I had pushed the Dahon across just minutes before. 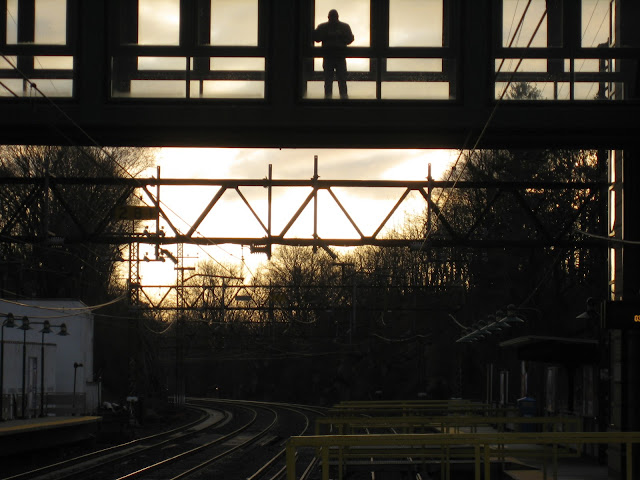 Shortly after, one of the new M-8 trains arrived to take the passengers waiting on the New York side to Manhattan. 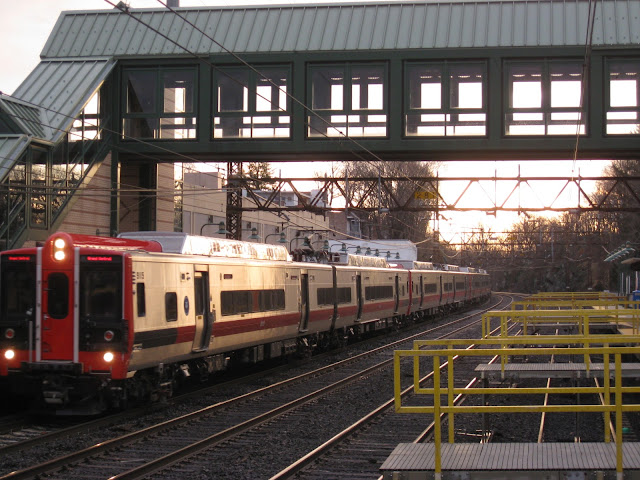 I wasn't as lucky as those passengers: when my train arrived a few minutes later, it was one of the older, Don Draper-era trains that made headlines over the winter because they broke down frequently. But on the plus side, the ticket from Greenwich to Stamford is only $2.25, and even though the trains are old, they still move at a fast clip. I know this because I own a Garmin Edge 205 bike GPS - a fantastic bike computer in that it can be easily moved from one bike to another - and sometimes I forget to turn it off when I get on a train. 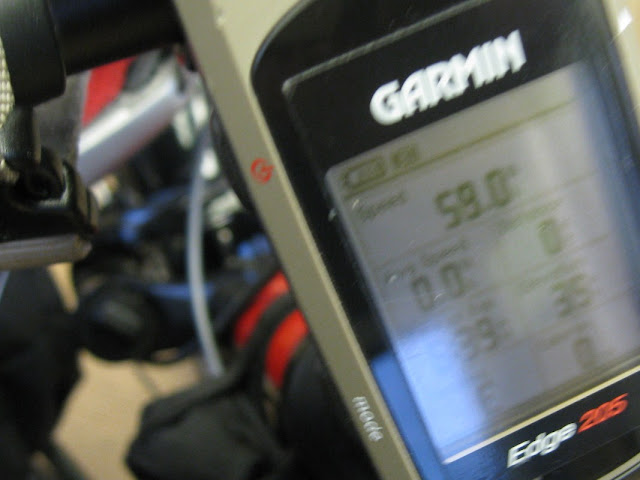 Since there weren't many people on the train, I unfolded the Dahon a minute or two before the train arrived in Stamford, and within fifteen seconds of the doors opening, I was on the road. I headed up Washington Boulevard and passed the Stamford Government Center (just beyond it is the Trump Parc Stamford building which still has units for sale). It was a bit chilly that morning but the sun had finally come out. 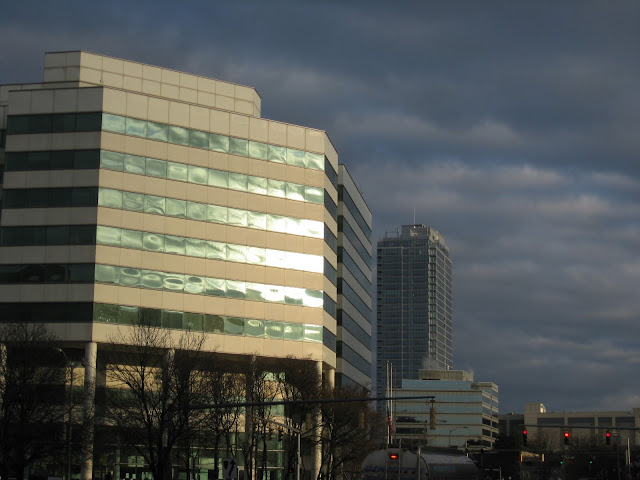 I arrived at work without incident, and leaned the Dahon against my office bike and set off on a typical white collar day, only I was expecting a call from Honda around lunchtime to tell me that they had found parrots living in the engine or some other issue that involved a delay and lots of extra money. As it turned out, my paranoia was unfounded: Around 11:30, the garage called and said the Element had no problems and I could pick it up after 1:00. I looked up the outbound train times and planned a just-in-time arrival so I could spend a little time riding around Greenwich. I then looked up the return train times but then remembered why I was going to Greenwich in the first place.

Upon arrival, I rode the Dahon past the Honda place and up some of the side streets. I debated whether I wanted to go to Greenwich Bicycles and say hello to the owner, Rob (who had sold me the Dahon Matrix in the first place) but knowing my inability to grasp time when I'm in a quality bike shop, I changed my mind and remembered my donut denial from earlier that morning.

So I stopped at the Black Forest Pastry Shop on Lewis Street. No donuts. Thwarted again. The black and white cookie I bought was an excellent stand-in. 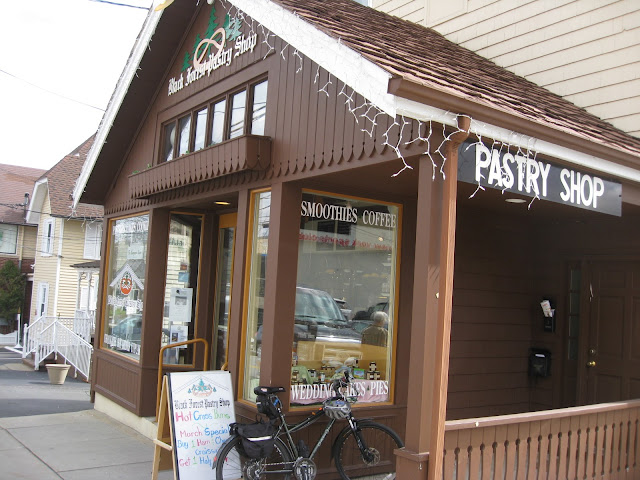 After the indulgence, I decided to limit my treat intake to only one baked good per day of Honda service. Since the Element has been a pretty reliable car so far, I figured I wouldn't be able to resume the Greenwich Donut Search until mid-summer.

But the day after I got the car back, I received a catalog in the mail from Greenwich Bicycles, and they are having a big sale from April 1 through April 3. It looks like a great opportunity to check out new bikes, browse for new tools, and maybe, just maybe, find a donut in Greenwich.