Bike Locks Work Best When In Use (and other lessons) 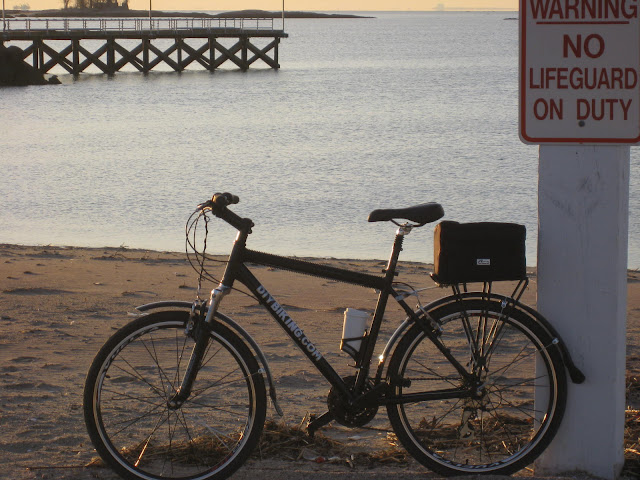 This, as you may remember from an earlier post, my office bike. It was almost stolen the other day.

Even though the picture was taken at West Beach in April it seemed like a good shot to use for this post since this was how the bike looked when a complete stranger jumped on it and took off.
Here's what happened: I went to Danny's Cycles during my lunch break to buy a frame pump. I met a new associate there who was kind enough to allow me to bring my bike inside, and he admired what I had done to the plain, black bike and liked the new wheels and tires.

That should have been my first clue that a near-disaster would strike not fifteen minutes later: the bike was originally a Nashbar AT-1; the "I Can't Believe It's Not Butter!" of mountain bikes. But in the span of about a year I added the Planet Bike fenders, the rear rack, the new rims, and of course, the DIYBIKING.COM label on the down tube. I hadn't really noticed how nice looking the bike had become.

I rode away, thinking I'd stop at Subway on the way back to work. I rolled by Zaza, the nice Italian place that opened up earlier in the year and I nearly stopped short as I realized a Subway was right there. I walked between the groups of people dining at Zaza and the nearby pizza place and I leaned the bike against the glass window of Subway so I could see it while I was inside.

You get the idea.

I paid for my sandwich and as I was walking toward the front door with it I glanced at the bike. Only this time I saw something I had never seen before: a tall, young guy with a white T-shirt grabbed my office bike, threw a leg over it as though it were his and began pedaling away.

Mind empty, I ran out the door and started chasing him. Running at full speed I yelled "DROP IT, MOTHERBLEEPER! DROP IT!" (I didn't really say 'Motherbleeper' but, you know, this is a family blog).

He turn briefly at my voice and pushed down hard on the pedals, but the bike didn't dart forward because the chain skipped (was I ever grateful for that bike's personality quirk and my inability to fix it) and I had left it in the big chainring. I was nearly upon him when he dumped it in front of Zaza, right in front of the people who were eating outside, and sprinted away, looking over his shoulder once. I think he even smiled when he noticed I wasn't chasing him further.

I glared after him as he disappeared around the corner onto Gay Street. I wasn't sure what to do at that particular moment, so I picked the bike up off the ground. As I did so, I was met by the sound of applause: a few people who were eating at the pizza place and a couple of Subway patrons who had come outside to see the commotion. I then became, as I tend to do when a lot of people are looking at me, extremely embarrassed.

I apologized to the diners for using profanity, put the chain back on my bike, and rode it back to the office. Since I didn't drop my sandwich in the pursuit, I ate it slowly when I got back to my desk. I didn't get a good look at the guy and I had my bike so I thought calling the police was pointless.
If it had happened while I was ordering my sandwich I would have missed him entirely. If it had happened while I was looking at my phone checking email while my sub was being toasted I would have missed him entirely. If I had noticed him from the distance of the entire restaurant instead of just half of it I wouldn't have been able to stop him.

If I had locked the bike with the huge cable lock that had been wrapped around the seatpost, it probably wouldn't have happened at all.

I should have been flattered that the thief thought the bike, with the DIYBIKING.COM label on it, looked like an expensive enough bike to steal and smug that I didn't drop my sandwich while chasing him, but I wasn't. I instead wanted to get the word out to everyone to secure their bikes. So I emailed a local blogger and the story, complete with interviews with local bike shops, was just published in Greenwich Patch.

I'm still embarassed I was shouting like Samuel L. Jackson's character from Pulp Fiction and that I didn't lock my bike with the lock that I bought specifically for that bike, but embarassment can feed information: lock your bike, and tell your friends to lock theirs.  If outlaws steal our bikes, only outlaws will read this blog. I don't know about you, but I can't live like that. 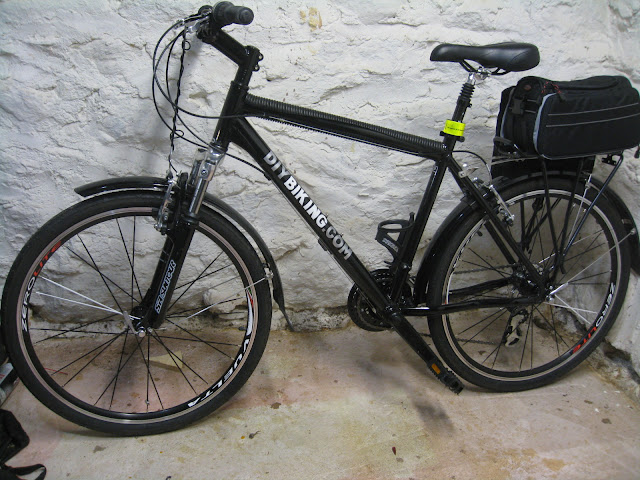