I'm lucky enough to travel to London about once a year, and when I go I tend to see a familiar sight: people on Bromptons, the legendary folding bikes that are made there.

I don't think many bikes really break down the differences between the bike culture in the U.S. versus that of the U.K. than the Brompton, or more specifically, this photograph. 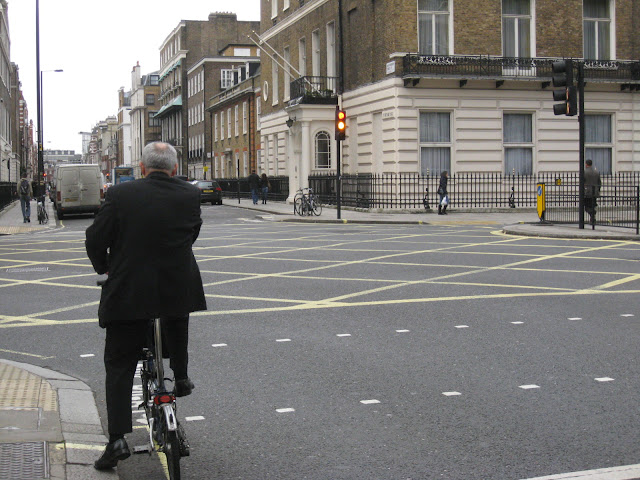 London is filled with people riding as though they are off to a board meeting or a job interview. See, that outfit wouldn't work if the guy was riding, say, for instance, the DiamondSchwinn but for the Brompton, it works.

Part of why it works so well is how small they fold and what a neat package they make when they are folded. Lots of folding bikes don't have this feature and are not only too large to fit under a desk but can flop around when you try to carry them (more on this in tomorrow's post).

Last April, when I was in London, I spied and discreetly photographed a Brompton in the wild on a weekday morning. In David Attenborough intonation, I will describe what I saw: 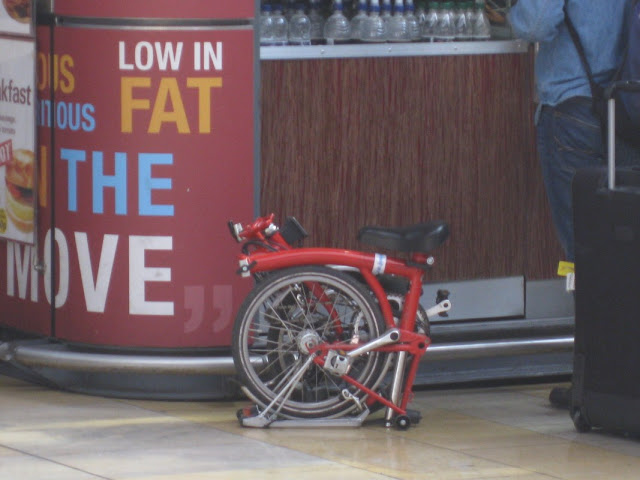 “The Brompton...sits...right next to its master. Completely still.” 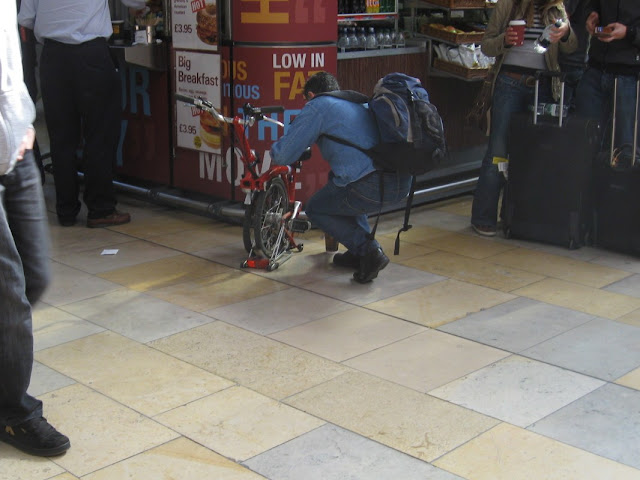 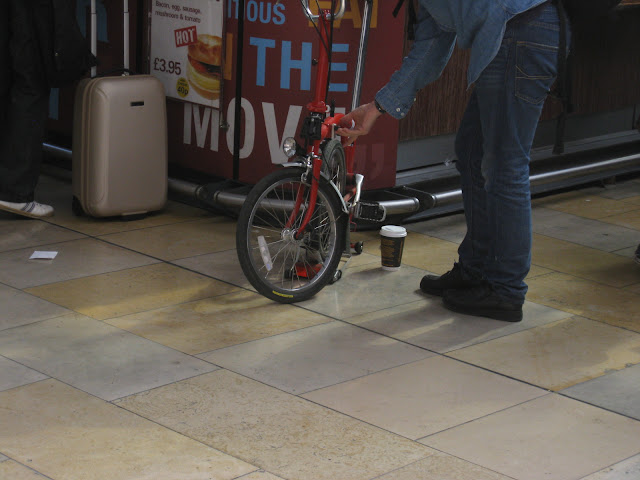 “The front wheel has been moved...into place.” 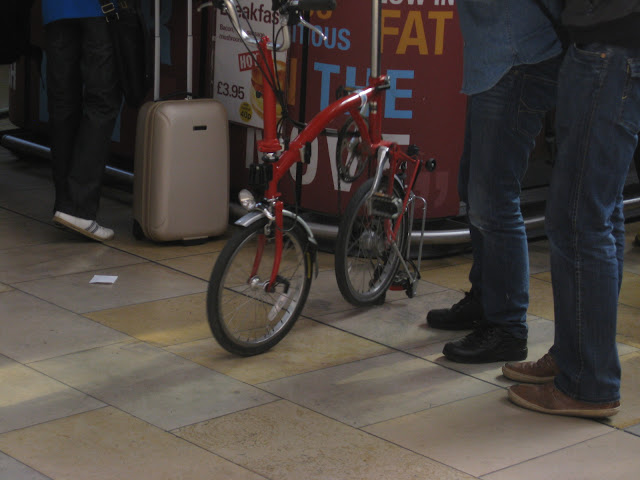 “Oh, now the rear is being swung into position. We don't dare...go any closer. It's going to move.” 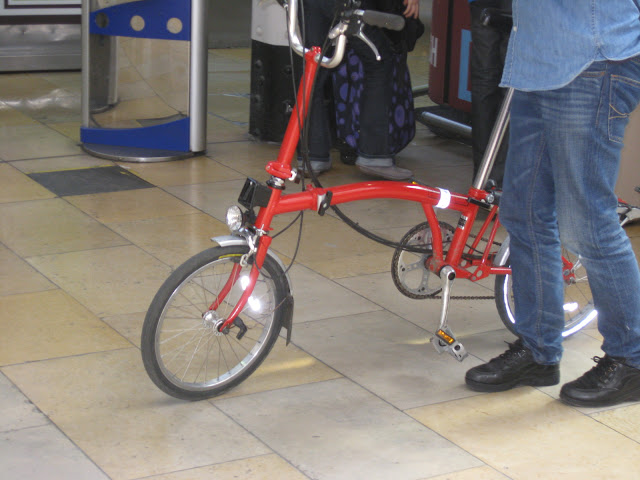 When I travel, I try my hardest to visit bike shops wherever I go so I can see bicycles that are rare in the U.S. The Brompton is really hard to locate around Stamford (although they are carried at a few places in New York City) but they are sold all over London. One such shop carried several, but sadly I didn't have the time to even ask if I could try one out. 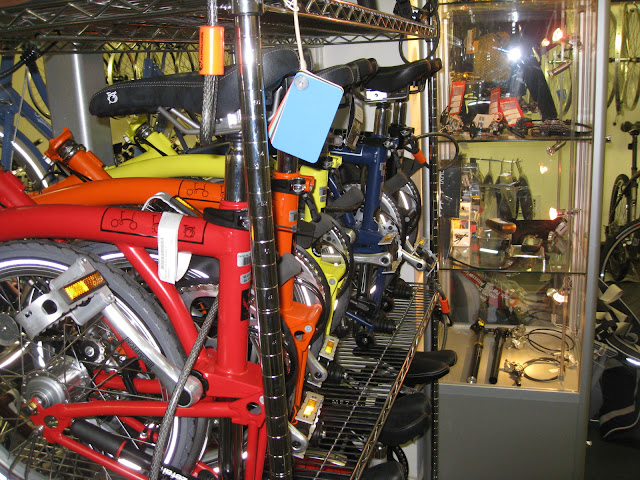 The more I learned about Bromptons, the more I became interested in owning one. How cool would it be to ride to a meeting or put the bike in a case to be checked with luggage? Depending on the options, I could have a Brompton for anywhere between about $1,500 and $2,200. A case would be an additional $350 or so.

At the high end, it's more than I've spent on the recumbent, my Dahon Matrix and my homemade mountain bike combined. It's hard for me to see past that reality, but the more I learned about Brompton, the more I realized how much value the company crammed into the tiny package. For instance, the stock seat comes with a grip pad beneath so you can use it as a carry handle. You can get rolling wheels so you can roll the bike around. Proprietary components all around to minimize weight. Lots of great stuff.

So I was grateful to find an authorized Brompton dealer while I was visiting Philadelphia: Trophy Bikes. 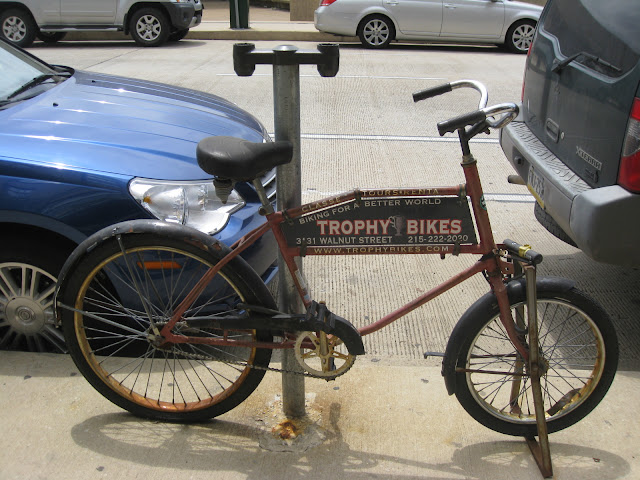 I forgot the name of the nice woman who helped me that day, but I left thinking that if I lived in Philadelphia and wanted a Brompton, Trophy Bikes would be where I'd go.

I learned more about the bike itself from her. The options (including the $740 titanium frame upgrade) were many and I began calculating how many of my old tools and unused stuff in my basement I'd have to sell before I could get one...before making the decision whether to get one.

The associate was kind enough to let me test ride a Brompton. I get nervous on test rides but I knew this chance would be hard to replicate. So I got on the bike and pedaled a few hundred yards. It was agile, a lot smoother than I thought (Bromptons have a shock absorber in the back) and it was...fun. All in all, a winner. 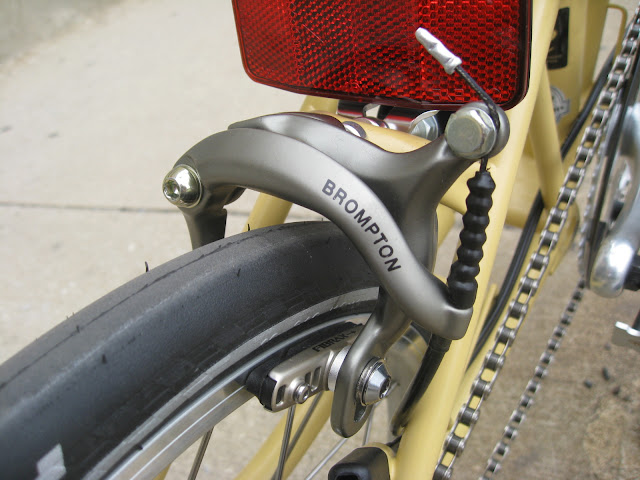 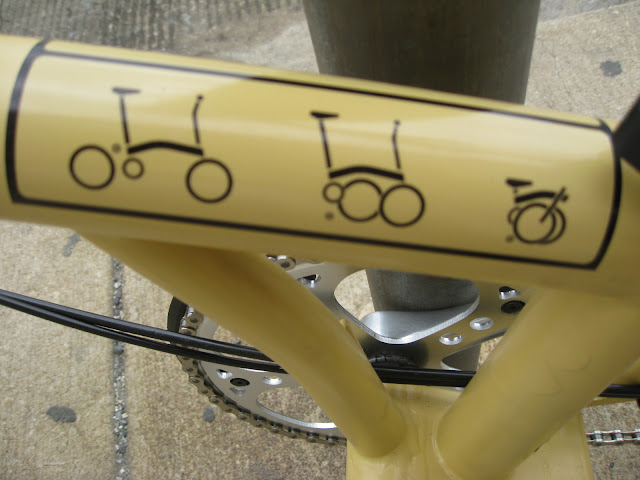 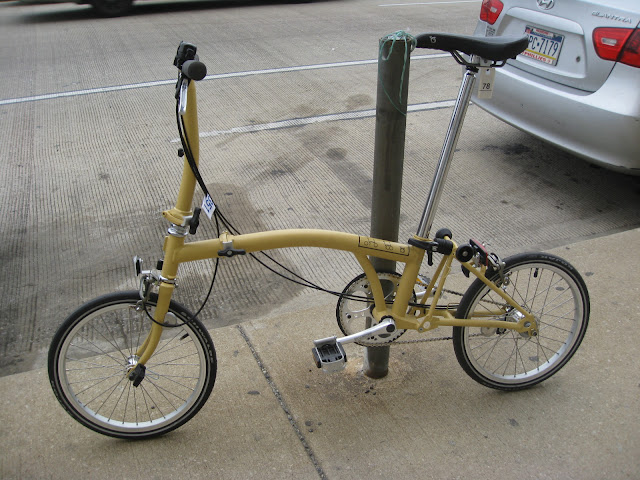 If I had the cash I might have bought that bike then and there. It's that good. Visit Trophy Bikes or one of the few authorized Brompton dealers in the U.S. to check them out. Or you can head to London with a big empty suitcase.