It started as an idea, mostly inspired by my cousin after I left a visit with him at Bluff Point State Park. I just started thinking: 'Building my own mountain bike. How hard can it be?'

It was hard. A lot harder than I thought. But it was the most fun I've ever had in my shop. It all began with this: 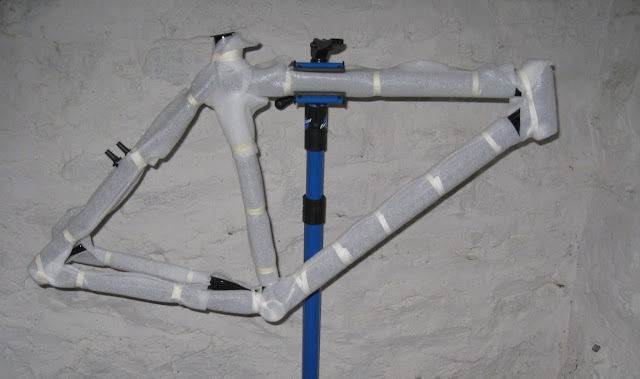 And now, after weeks and weeks of building, making mistakes, ordering parts, making more mistakes and repeating, I have....THIS! 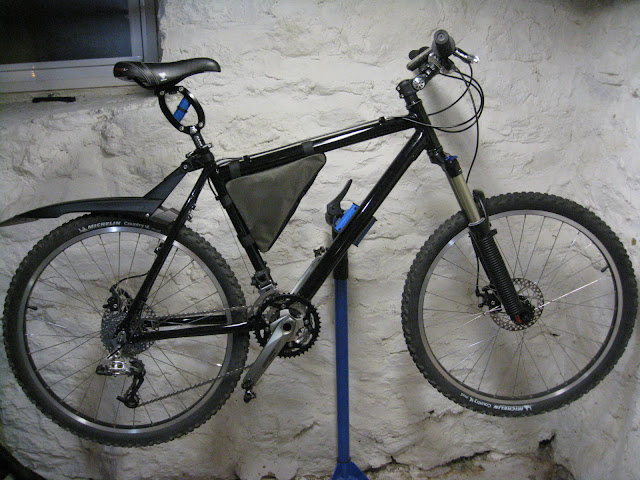 I highly recommend building a bike, if for no other reason you get a photo album at the end where you can go over the different stages of development, like baby pictures. And like a baby, it grows up so fast.

I will say this: it took me a huge amount of time to adjust the front derailleur, but once I did I was able to add a few other features to make this bike my own.

The ToPeak Defender I bought from Greenwich Bicycles had, as I found out when I got it home, received some negative reviews online. However, the ones I read had to do with the fender not staying in place over the wheel.

Because the mountain bike is sharing the same excellent Cane Creek Thudbuster with my Dahon Matrix I had no interest in mounting the fender to the post itself. So I did this: 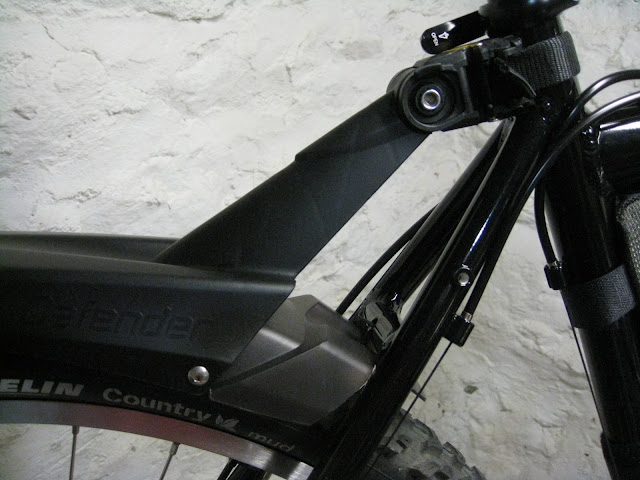 Yes, it is mounted to the frame, providing barely enough clearance for the tire. I used tin snips on the fender to trim away the plastic before drilling a hole. I then inserted a plastic wire tie, which help keeps the fender in place.

I also decided to make shock boots out of a piece of vacuum cleaner hose. The boots are light, keep everything from getting scratched or dinged, and actually looks pretty cool. Well, I think so. 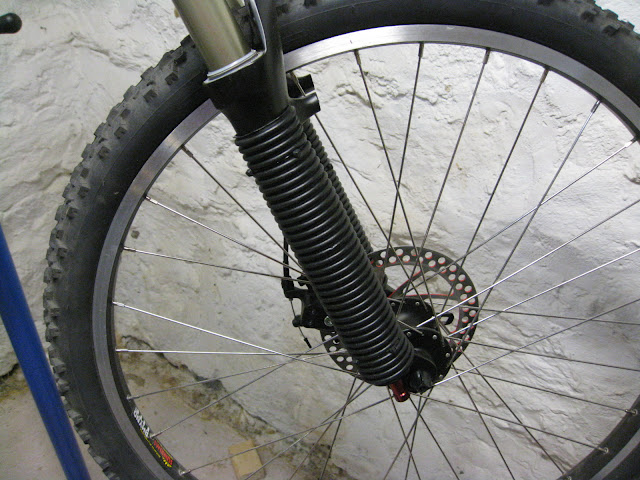 Now, I wanted to document my first ride with it in a special way, so I seriously thought about buying an HD Hero video camera. But I was just about out of money for this project and couldn't think about spending a dollar more for a while.

Then I remembered something: over the summer of 2010, I bought an iPod Nano 5th Generation, which has a video camera built right in it. It's a nice little extra feature, and I don't understand why Apple took it away when the 6th generation came out a couple of months later. Maybe they wanted to stockpile it for the iPad 2.

Anyway, I had the iPod Nano, so all I needed to do was figure out how to mount it to the mountain bike. So I consulted the 304... 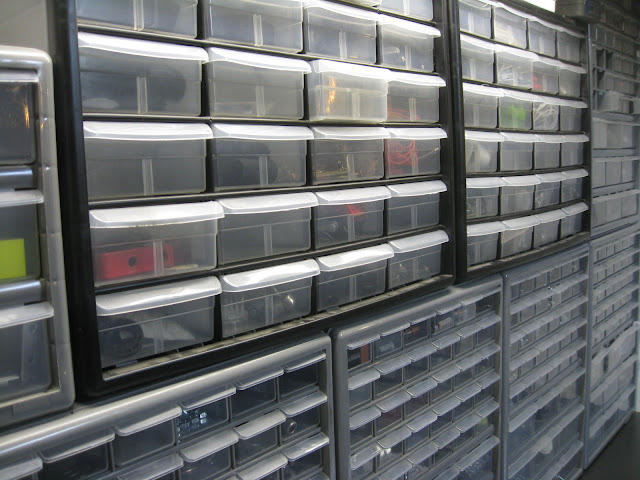 ...and I found some rubber O-rings and some old plastic mounting bits from a bike's rear reflector. The discovery of an unused parts sorter gave me everything I needed. 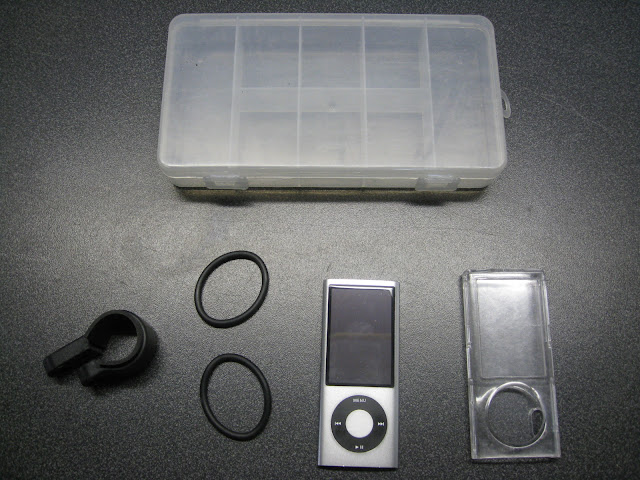 I also have, as you can see, a plastic case for the Nano to go in. Thrilled to extend the mountain bike project further, I set to work on the camera mount using the things I had found. This is what I came up with: 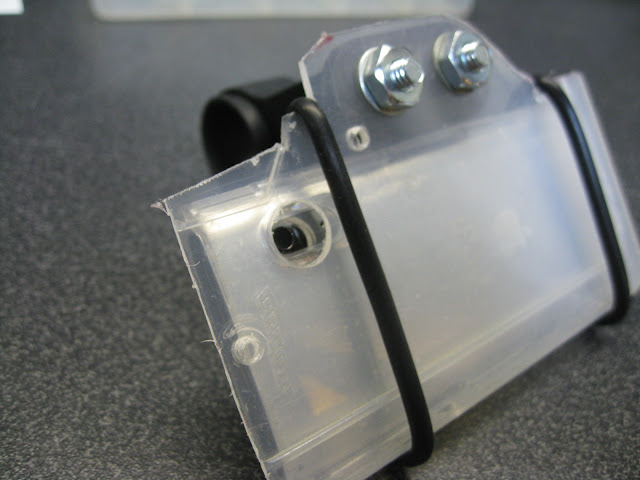 I broke the lid from the parts sorter and used a utility knife and a pair of scissors to cut it into the shape you see there. I added a couple of notches so that the Nano would stay in place with the O-rings. Some careful drilling gave me the holes for the mount, and rummaging through the 304 got me the nuts and bolts. I mounted it to the handlebars, adjusted the angle, and was left with this: 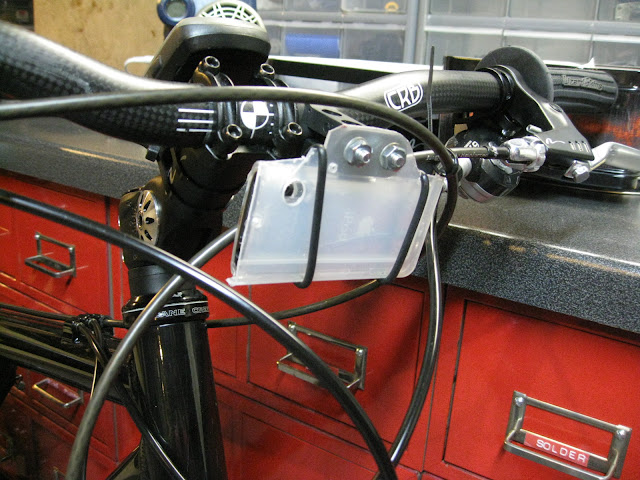 Now, it isn't an HD Hero. I mean, it is a bit awkward to turn the camera on and off and it isn't waterproof, but on the other hand it didn't cost me anything and I had fun building it.

I'll post a video of the first ride another day, but the Five Boro Bike Tour is the day after tomorrow, and there's still a bit more tuning and adjusting that needs to be done on the museum piece I'll be riding.
Posted by Mike at 6:25 PM