I've learned from the first couple of years of doing the Five Boro Bike Tour that bike shops are often crowded with people trying to get their bikes tuned in time for the event.  Lucky for Stamford residents, there's a new shop in the south end: Pacific Swim Bike Run, which is at 575 Pacific Street and a brisk walk from Fairway Market. 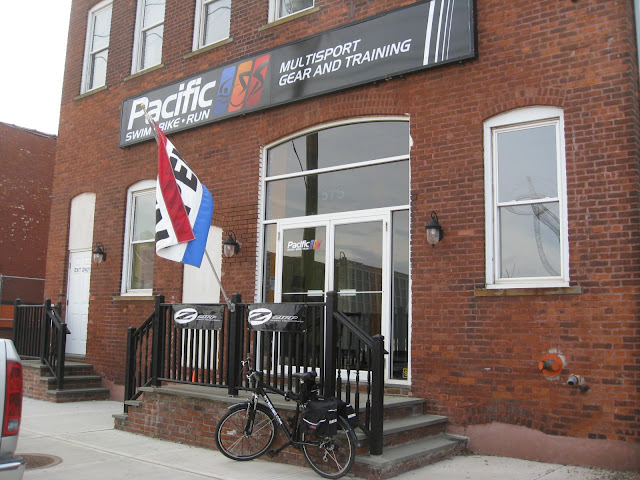 I stopped by for the first time the other day on my office bike to check the place out. I have no idea what the inside of that building looked like before but it does look better now: as the name suggests they've got swimming, biking and running gear for the triathlete but they also have a nice-looking training facility on the premises that I might just take advantage of this winter if the snowbike doesn't give me enough exercise.

I met one of the co-owners while I was there and we chatted up about bikes and the upcoming Five Boro Bike Tour. Amid the carbon fiber works of art/bicycles that look like they're moving fast even while standing still I told her about my recumbent. She earned points because she refrained from laughing or giving me a puzzled look when she suggested I bring it to her shop for a tune up, but I declined with thanks. After all, this is the kind of bike one tunes oneself: 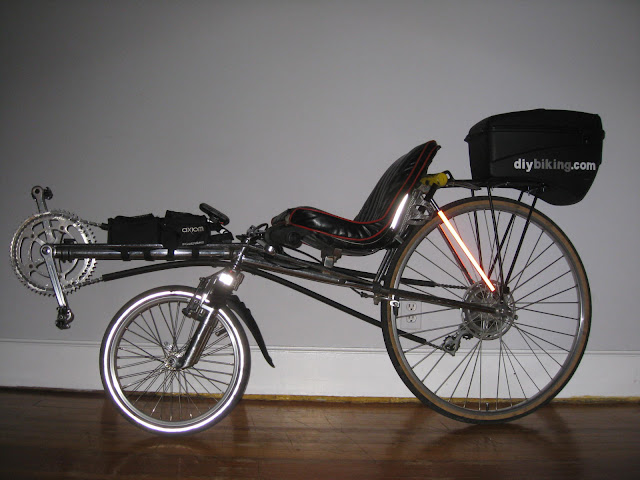 This is the early 1980's Turner recumbent.  It may very well be one of the first Hypercycles that Milt Turner made when he started building frames. At one point I emailed him a picture and even he wasn't sure quite how old it is, but it's comforting to know the name and address of the very person who made the frame nearly three decades ago (he still makes recumbents today).

The small chainring has 52 teeth, which is a lot. When comparing road bikes with my cousin one day, he shook his head in awe and exclaimed "your smallest chainring is bigger than my biggest!"

There's also a 60 tooth chainring next to it but no front derailleur, so unless you're willing to manually move the chain from one ring to another, you've got six speeds on this bike. You also have a chain that is about 10.5 feet long and a frame that doesn't always sit properly in a Park Tool workstand, so in order to service it, you have to be creative.

This year for the tune up, I used my Dexter Morgan kill room table/workbench overlay, which was one of the most useless things I've made. But I salvaged the build slightly by cutting several inches off to make it narrower and later cut a hole in it to insert a trainer. The idea was I could drop it through the hole and clamp it into place with the $40 Ace Hardware workbench and mount the recumbent's rear wheel in place with it. 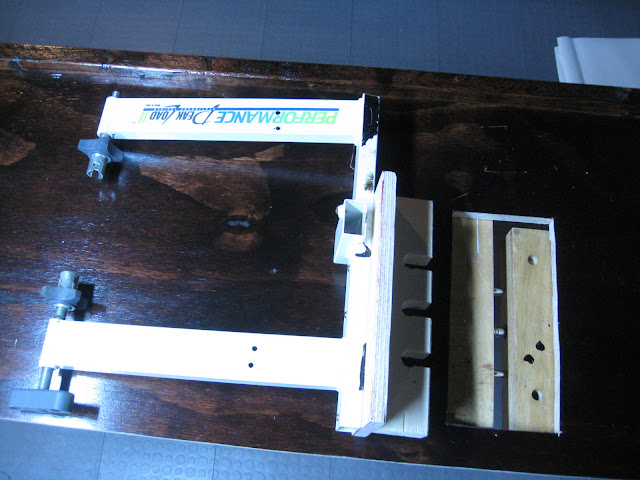 It worked well, so the Dexter Morgan table may actually get a new lease on life. I covered it in paper to brighten the workspace and collect the grime which would inevitably drop from the frame while cleaning it. 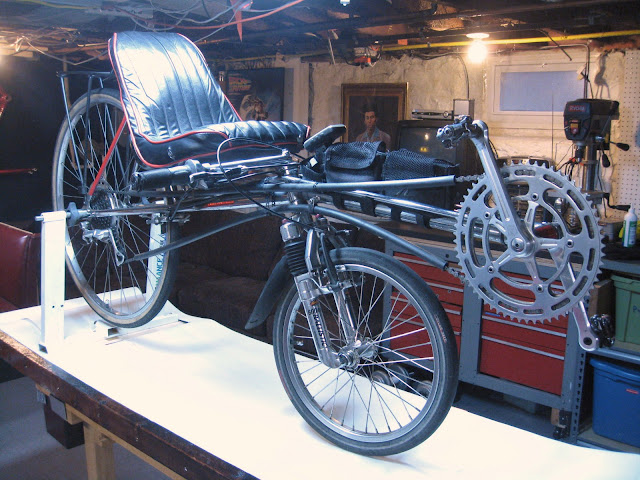 With the recumbent up on the table, I could finally get a good look at what a season's worth of wear had done to it and check out some of my earlier modifications to see how they were holding up.

As you can see, the chain needs to bend in order to not interfere with the front wheel, and the recumbent came with an idler gear originally. It chattered frequently and was a pain to clean, so one day I bought two black chaintubes from Hostel Shoppe Recumbents and taped/bolted them into place. 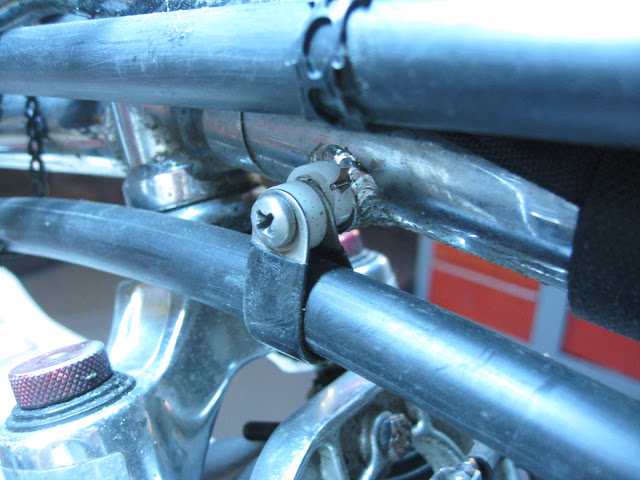 The little black bracket in the photograph is where the idler gear used to be. Since the bracket wasn't made for this purpose I used (no kidding) the white sprockets from a microcassette as spacers: one between the metal bits of the bracket and once sandwiched to the frame. You can even see the pin that used to hold the tape (probably from some boring conference I attended and taped 10+ years before) in the picture.

The tubes also kept my pants and legs clean when I'd get on and off the bike, so it was a worthwhile investment. However, it makes taking the chain off and putting it on again very interesting, and given the huge amount of filth on the bike, I'd have to take the chain off. 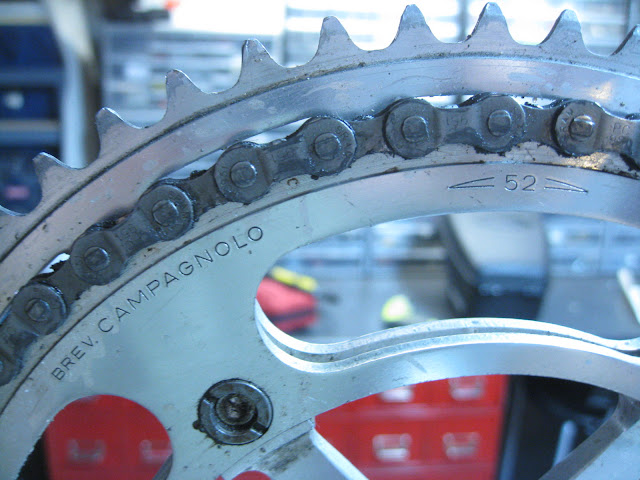 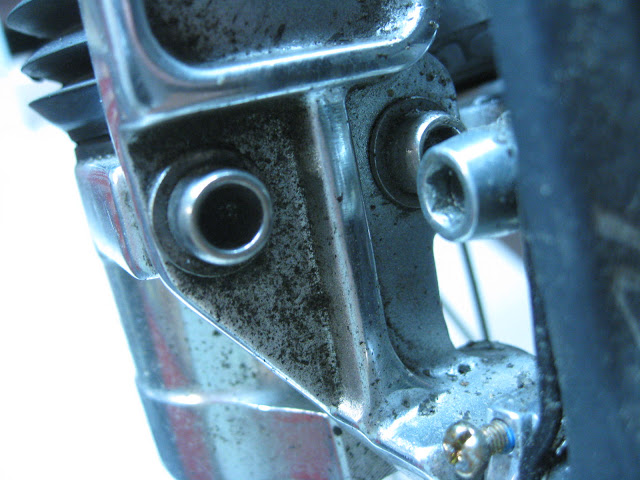 After mismanaging the quick release on the mountain bike I built I've gotten good at removing quick links easily. So that's where I started. After getting the first seven or so feet of chain off the bike, the rest slides effortlessly out of the chain tube like an onion sliding out of the fried part of the onion ring. Only then can you remove the chainrings to clean them. 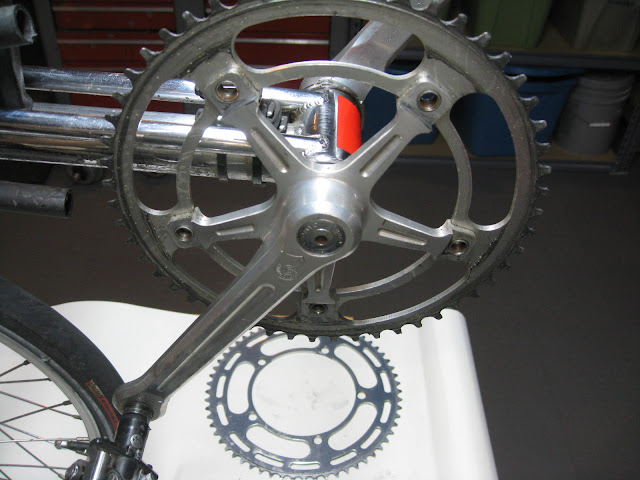 If you look through the chainring that is still in place, you'll see a mount for a bike light. Since I have to ride the bike to the Stamford train station in the dark on the morning of the Five Boro Bike Tour, I needed it to stay in place.

Another problem I was having with the bike was the seat, which wasn't as comfortable as it was during the Iran-Contra/Family Ties era. The seat is fiberglass and the cover is black vinyl with a foam interior, and the zipper broke years ago. I originally solved that problem with duct tape but it left a sticky film when removed, so I used more duct tape to remove the film (it's the same technique I used once to get chewing gum off a grateful woman's coat when she hadn't looked where she was sitting on Metro North). 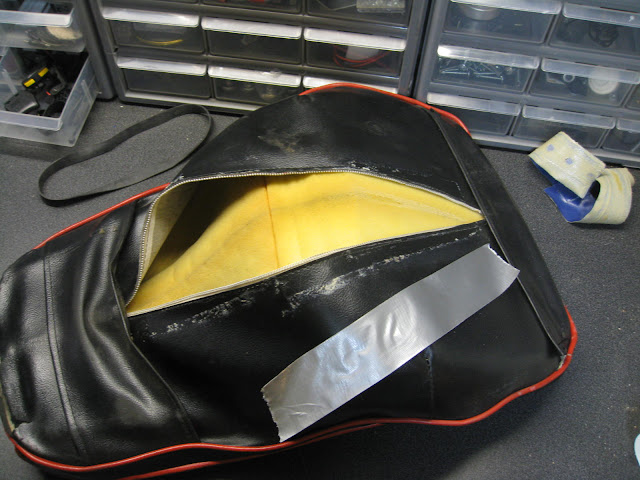 I removed the foam padding, which was quite crumpled and flattened from years of riding. I needed something to make it more comfortable and keep its shape, and luckily in the basement I found my solution: 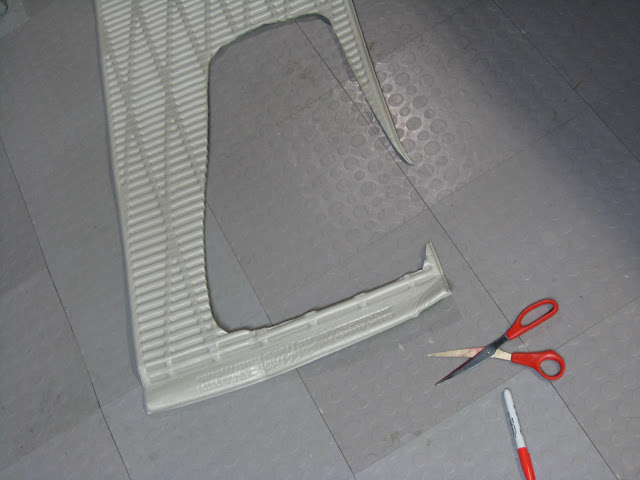 As happy campers know, this is a Therm-a-Rest sleeping pad. I simply straightened out the original pad, traced around it with a Sharpie and cut it with a pair of scissors. I re-stuffed it into the seat which gave it a seat-like shape, then put the original foam back in before sealing it with duct tape.

I moved the bike (so much lighter with the chain or trunk box!) from the stand so I could try sitting on it. If I had grafted a La-Z-Boy recliner to the frame I would not have been more comfortable.

I put the bike back on the Dexter Morgan table with renewed confidence. I still had to adjust the front and rear brakes, finish cleaning, clean and lube the chain, check the frame for cracks, and adjust the derailler and shifter (changing the cables if necessary). It's a lot to do before the Five Boro Bike Tour, but it needs to be done, so if you are gearing up for the Five Boro Bike Tour, own a bike that doesn't belong in a museum and don't have the time or the tools, give Pacific Swim Bike Run a call for a tune up.

I'll finish working on the recumbent later: right now it is 7:04 on Sunday morning and time to ride.