My wife is an artist and enjoys participating in something called Worldwide Sketchcrawl, which is every few months and consists of artists meeting at cities all over the world to go from place to place all day and sketch before posting the images to the Web (and when the artists in the U.S. wake up in the morning, they like seeing sketches that have already been posted in Australia).

It's very, very cool. But I'd rather bike.

Since my wife wanted to sketch Providence, Rhode Island it meant she'd be sketching while I'd be biking in the Ocean State. I packed up the trusty recumbent and we set off from Stamford early Saturday morning.

As luck would have it, the coffee shop/meeting point for the artists was less than a mile from the East Bay Bike Path, which is a 14.5 mile rail trail which stretches from Providence all the way to Bristol. I parked the Element in a parking lot behind the Providence coffee shop, said goodbye to my wife and the assembled artists, and pedaled to India Point Park, which I had determined to be the starting point for the trail. 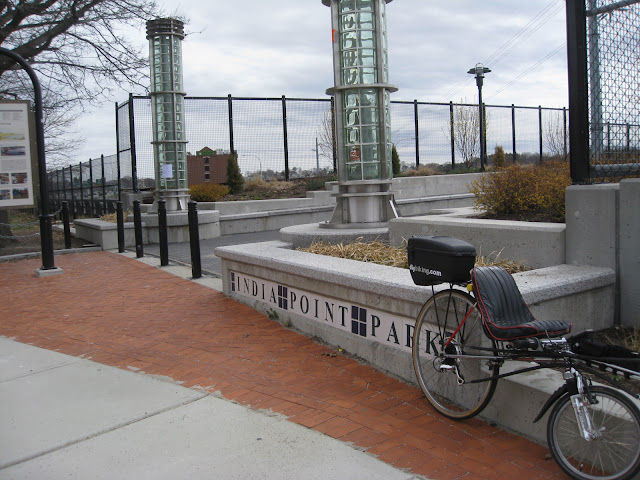 I crossed over the highway using this bridge and down into the park, where I quickly discovered I had to pedal up to another bridge to cross the river. I'd never try this with a bike that had a longer wheelbase because the Lombard Street-like switchbacks were extremely sharp. 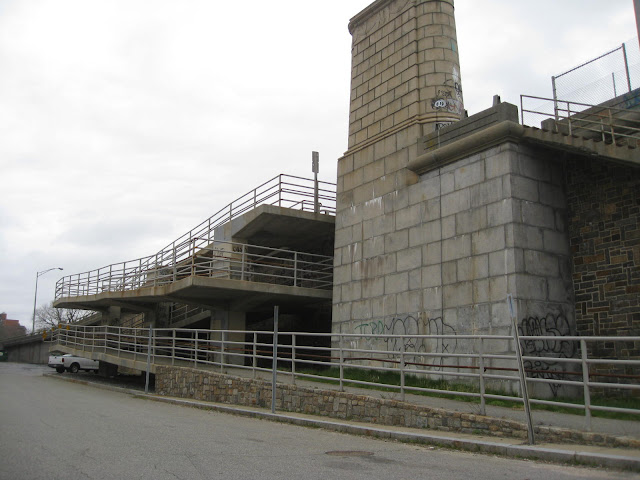 When crossing the bridge, I had to contend with a cyclist ahead of me who wasn't very fast, and since the non-car area was so narrow I couldn't pass him. But before long I was on the other side, and after barely 1/10 of a mile of riding on a public street, I was on the trail. There's a rather steep climb before it crests out and falls again, becoming a flattish rail trail (complete, in some parts, with rails) 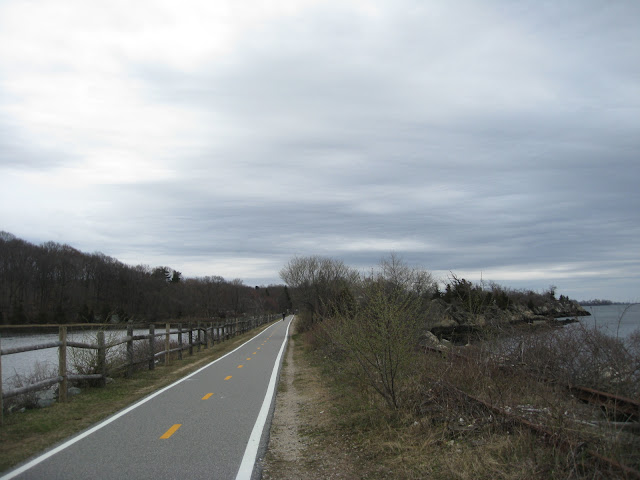 It's not just any rail trail. This one takes you back some pretty beautiful scenery (it would have been even more beautiful if the sky didn't look like it had been made by the set designer of "The Road" but I didn't really mind). 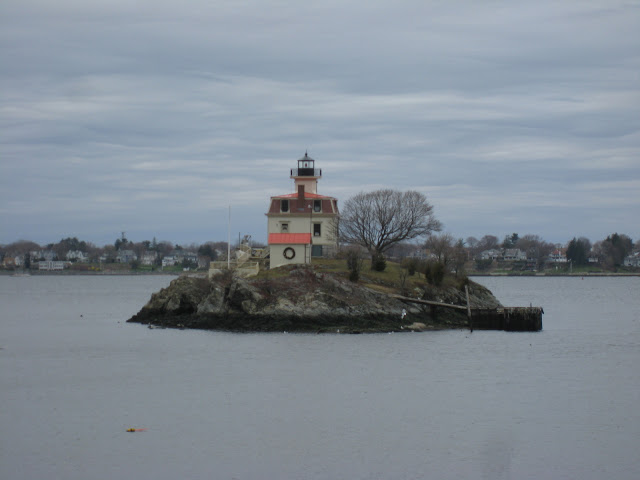 Since the rail trail runs through populated areas, there are a lot of places to stop and eat. But there are other services too as this railway station had long ago been converted to a tanning salon. 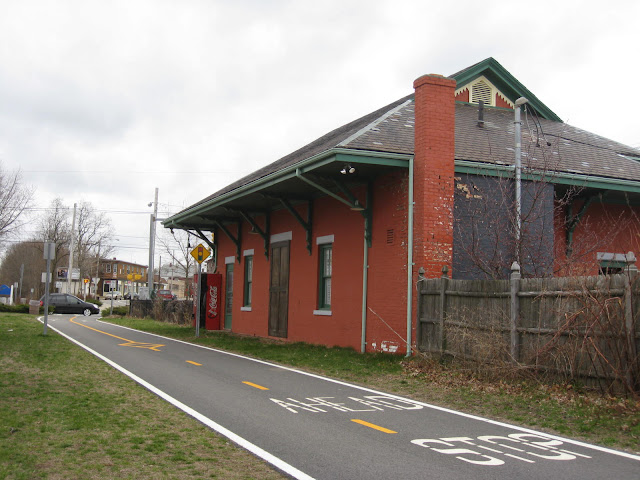 Several miles in, I came across Your Bike Shop, which of course is accessible from the road but I noticed a well-worn patch of dirt between the bike trail and the parking lot. I made a note to stop there on the way back. 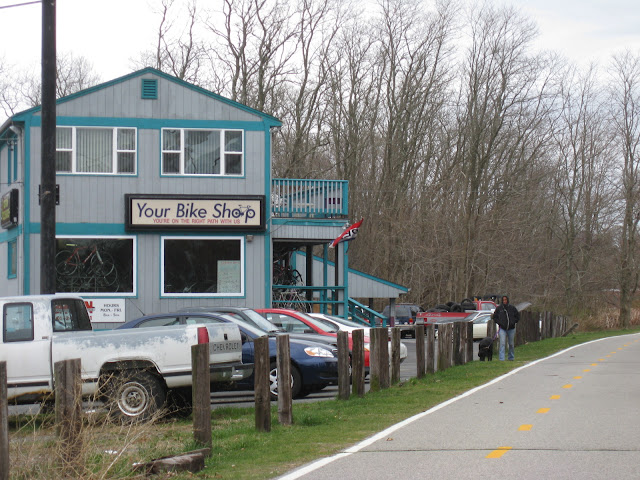 As would be expected with a rail trail, there are several areas which cross roads, but it wasn't much of an issue and some of the busiest places had crossing signals. There were so many long stretches of trail where your mind can just wander you may not even notice you're arriving in Bristol until you've arrived in Bristol. 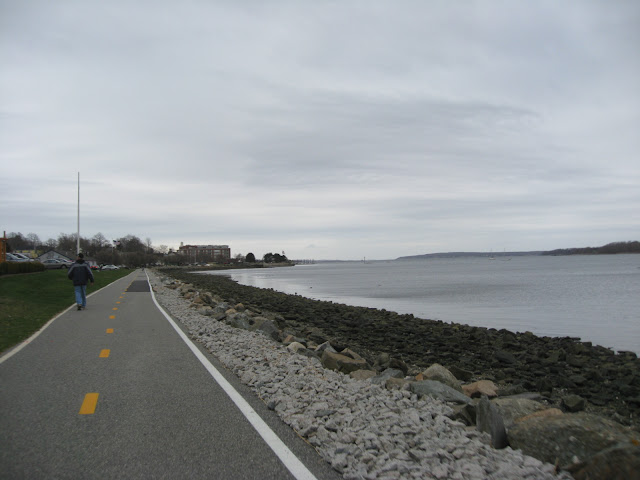 After I took this photo, I glanced over and noticed an ice cream stand. It was the fourth one I had spotted on this trip which made me realize that during the summer, this trail must be one of the busiest and happiest rail trails in New England. Some of the ice cream shop owners had used some business savvy and had put bike racks between themselves and the trail. This one featured a drive-up window. 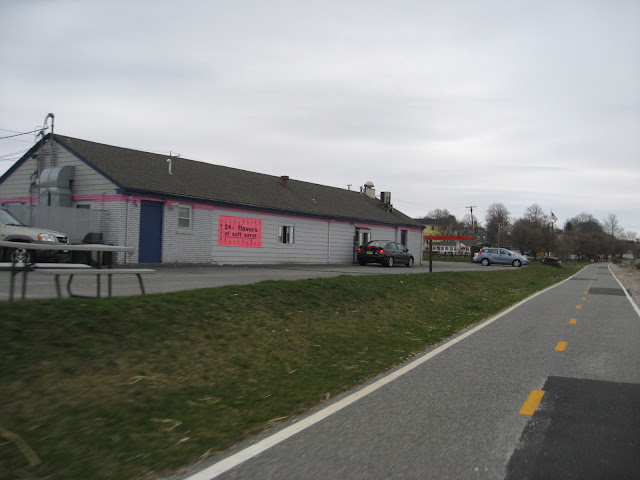 The trail came to a stop soon after I took that photograph and I found myself in front of a map of downtown Bristol, which featured some of the businesses in the area where one can eat and shop. Also important: there was a public bathroom with a bike rack positioned nearby. 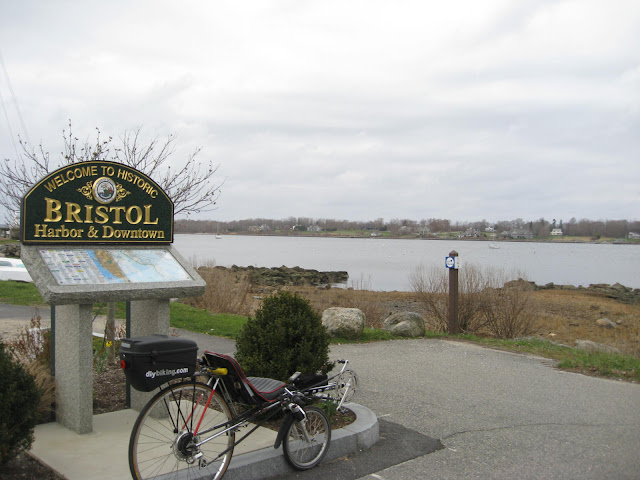 I was incredibly, remarkably hungry when I arrived, so the first thing I did was set off to find a restaurant. After just a few minutes of pedaling, I came across a cafe which had two bikes parked in front; neither of which were locked to anything. Taking that as a good sign, I stopped at what I discovered was The Beehive Cafe. 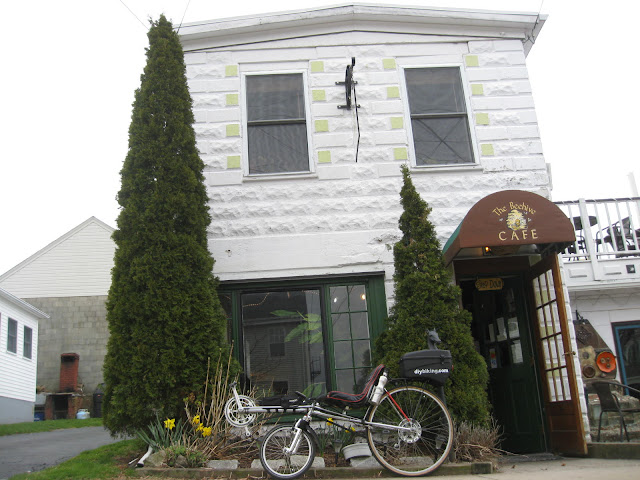 Inside, I immediately stepped to the counter and ordered a chicken sandwich and tomato soup. I was so ravenous I can't believe I paused to take the picture of my delicious lunch before inhaling it. 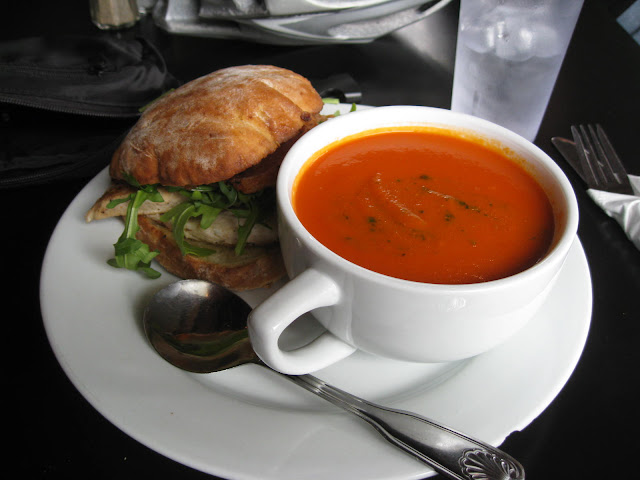 It was an excellent meal and I hope you have a chance to eat there someday.

Unfortunately for me, I was still hungry when I finished the soup and sandwich. I had only two small pieces of bread with jelly for breakfast nearly seven hours earlier and had just ridden sixteen miles through some rather heavy winds.

So I bought an oatmeal raisin cookie from The Beehive Cafe before I left. I thought I'd eat half of it and save the rest for later, but it was so perfectly baked I ate it all in minutes.

I resumed riding around Bristol, which is a very nice looking Rhode Island town... 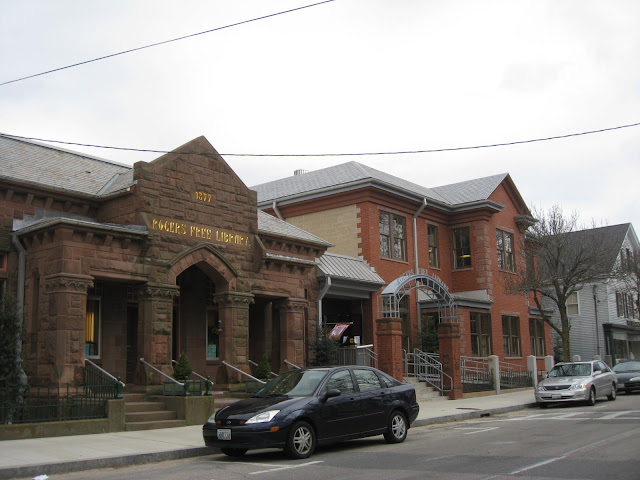 ...but I was still hungry. So, I asked the Easter Bunny if she could direct me to the nearest bakery. 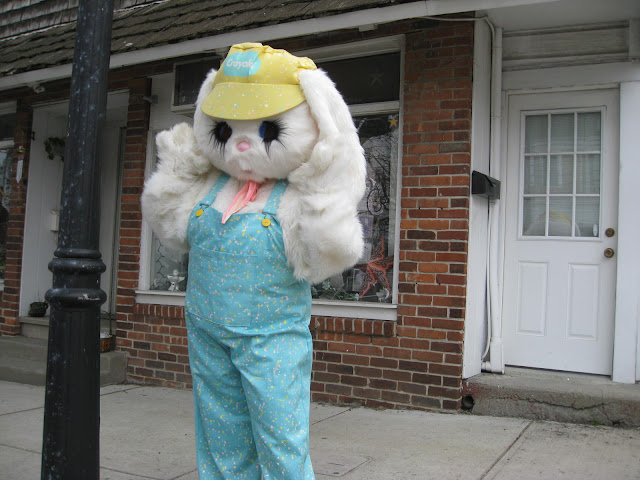 I wasn't sure why the Easter Bunny was in Bristol, and even though the photo may suggest otherwise, she was very helpful at directing me to a bakery: The Cake Gallery, which had some pretty nice looking wedding cakes in the shop window. 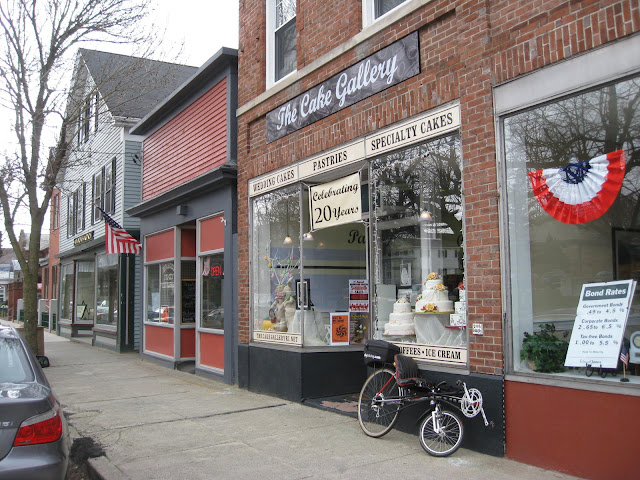 I wasn't interested in a wedding cake, but being someone who can't eat a whole lot of chocolate before getting a headache, something in the shop caught my eye. 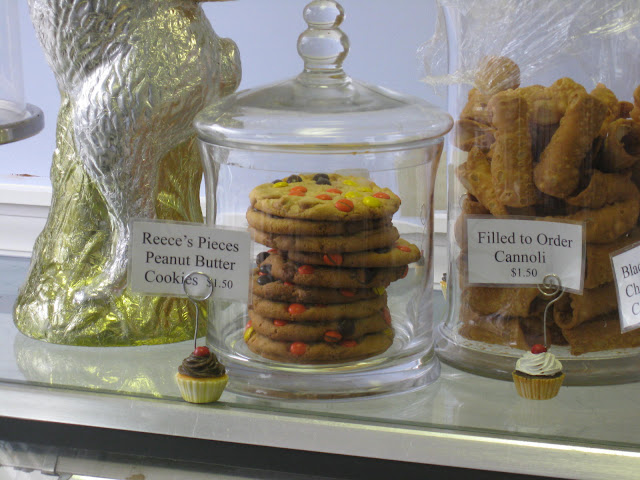 Peanut butter cookies with Reese's Pieces baked in them. The perfect cycling snack if I ever heard of one.

When I finished that cookie I was finally full, so I decided to head back to Providence. On the way, I stopped at Your Bike Shop for a bit of browsing, and one of the things I saw were the stools they had made from old bike frames. I liked the shop immediately. 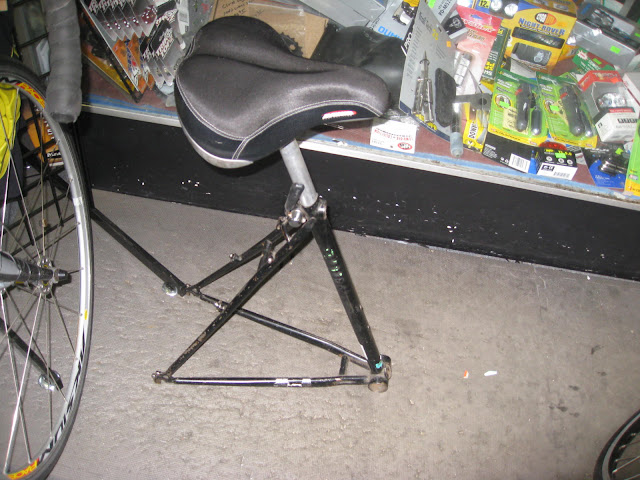 While I was in there, a young woman came in with a flat tire, which they inflated at no charge. Seeing the kindness reminded me to look for the much sought-after 27" tire for the recumbent. The owner checked the back of the store.

"I only have one," he said apologetically.

"I only need one," I said, before explaining that the bike leaning against their shop outside used a 27" rear wheel and a 16" front wheel.

I had to work hard to bend the tire into a shape that would fit into my original bike box but I had it done in short order. Later in the journey back to Providence I noticed a few bikes for sale. 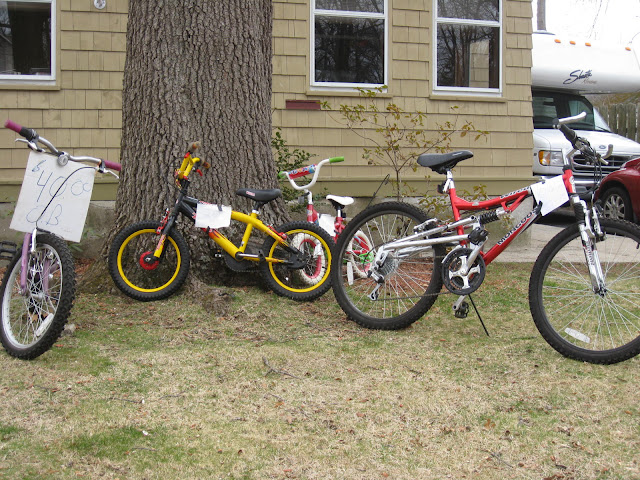 None looked like they'd be worth the hassle of trying to get them back to the car (Still about five miles away) so my Saved from the Scrapheap series will have to wait for its next subject.

So I pressed on. Soon, I came toward the end of the trail which had a great view of Providence. I didn't even see it before since I had been riding in the other direction earlier in the day. 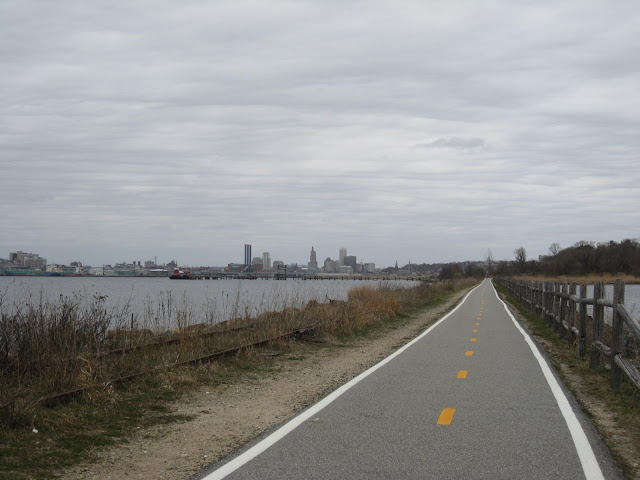 I went up the big incline, then crossed down into the street before climbing again to get to the bridge. This time, there were no cyclists in front of me. I pushed the recumbent past 20 MPH on this stretch, and all I could think while racing down this narrow chute was, as you probably guessed, "Artoo! Try to increase the power!" 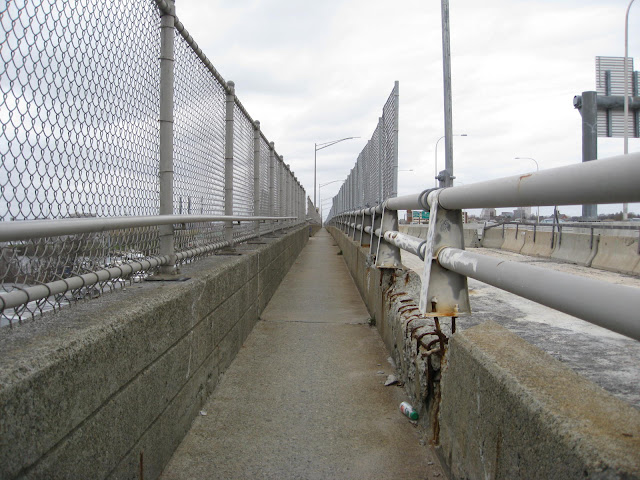 After descending Lombard Street and crossing back out of India Point Park, I took a roundabout way to get back to the car so as to round the ride up to an even 35 miles. I was glad I did, because I found this in the road: 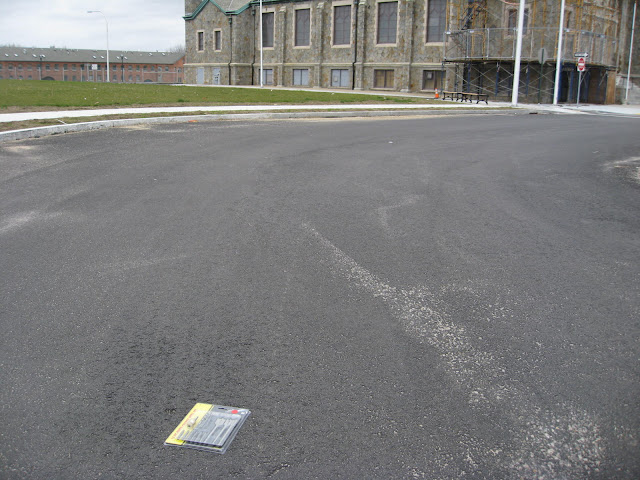 Yes, it is what it looks like, which is a set of cheap drill bits. Unopened, they had a sticker on them that read "$5" which made me wonder if they had been at a tag sale earlier in the day. I do not know the circumstances that led this pack of drill bits to the road that day. All I did know is that I had found something that was actually useful, so I took it with me.

I returned to the parking lot where I left the Element and stuffed the drill bits and the recumbent into the back before Clark Kenting back into non-cycling clothes so I could be semi-presentable when meeting back up with my wife and the other artists. When I did, I learned they had enjoyed sketchcrawl (you can see my wife's sketches at www.sumacm.com) and that we were going to La Laiterie at Farmstead in Providence for dinner. 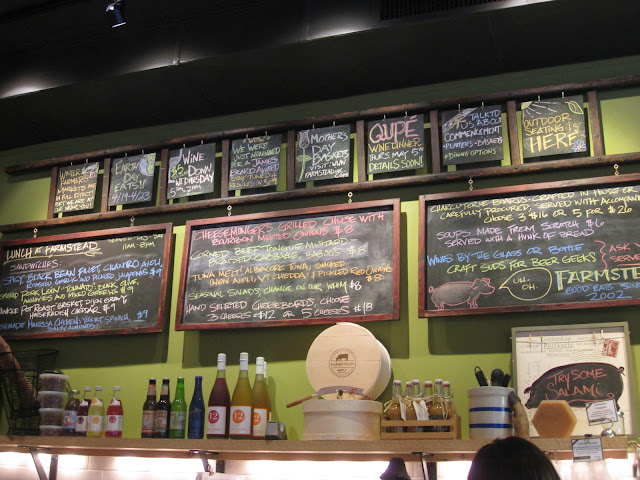 I met the chef. His name is Matt. And the food is pretty incredible, and just what every artist and cyclist needs at the end of a long and enjoyable day.