Workstand and Deliver II: Back to Portability

So I woke up this morning and checked my email. Among the half-dozen messages there was one from my dad that bore the subject headline: Bicycles.

Intrigued, I looked at his message first.

He had brought his and my mother's bicycles out of storage and he had a minor issue with his. Since we were going to see each other over the weekend, he said he'd like me to take a look at it and repair if necessary.

He also mentioned the Mystic Cycle Center was having a big sale from April 14th through the 17th. New London county residents: be advised.

His message meant I needed to undo the two bolts on my PCS-12 and convert it back to the finger-pinching PCS-9. I had no problem with that. It's what I built it for.

But then I remembered that when I built the best bike workstand in North America part of the reason I loved it so was that all of my tools were in one place and easy to reach. If I were to set up the PCS-9 version up in his yard, where would I put my tools?

In less than 30 minutes, I built a solution. It began when I looked up into the rafters of the shop and saw this: 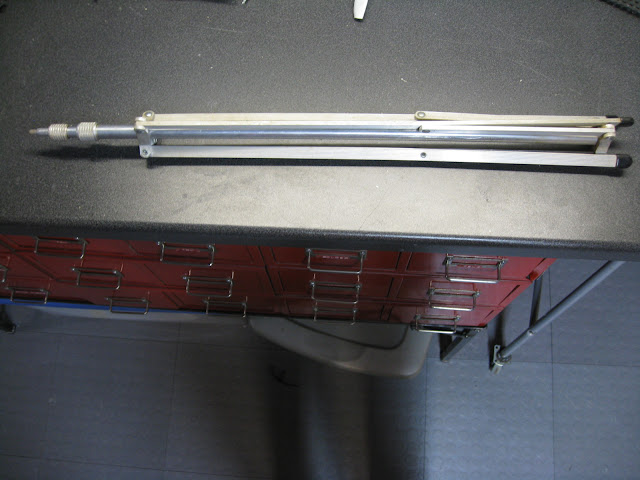 This is one of the random things I picked up from my dad when he was moving from Tolland to Mystic and consolidating workshops. I believe it is a camera tripod of some kind. It is very light and sets up in seconds. I thought it would be stable to build a portable tool stand.

I remembered I had bought a detachable plastic work tray which isn't nearly as nice as the Park Tool Work Tray and wondered if I could attach it to the tripod somehow. But I didn't like that cresent moon-shaped tray anyhow (or at least that's what I told myself since I couldn't find it).

But I had this: the back cover from a recently deceased microwave. It was metal and tray-like, so I went to work using tin snips to cut off the flange. When I was done, I sanded the edges to get a smooth surface. 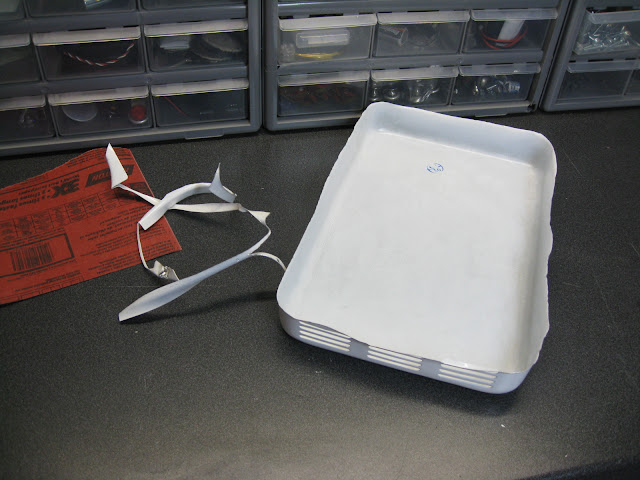 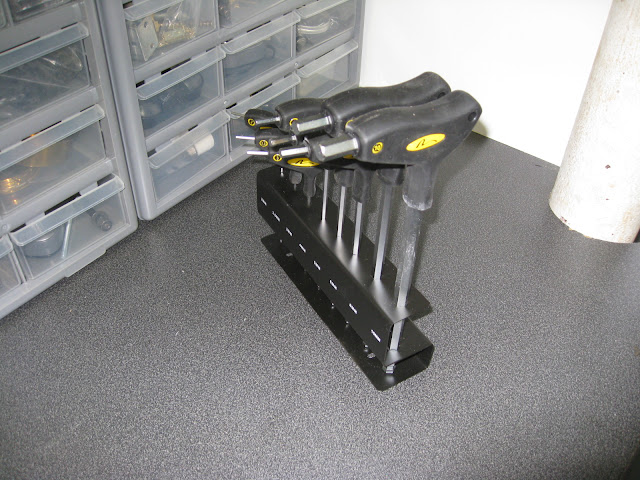 With my shop workstand, I don't use the black metal thing they are standing up in; the wrenches stay in a drawer. But I figured if I carefully drilled a hole in the bottom of that and the microwave part it would screw into the top of the tripod.

To make it less noisy when I'd put tools on it, I used shelf liner...which I took from the bottom of a shelf in my shop I don't open too often. I cut it to size and put a slit in the middle for the hex wrench stand. When sliding it in, the holes in the hex wrench stand and the microwave part/tray would quickly line up, and it was easy to screw on the camera mount to hold everything in place. 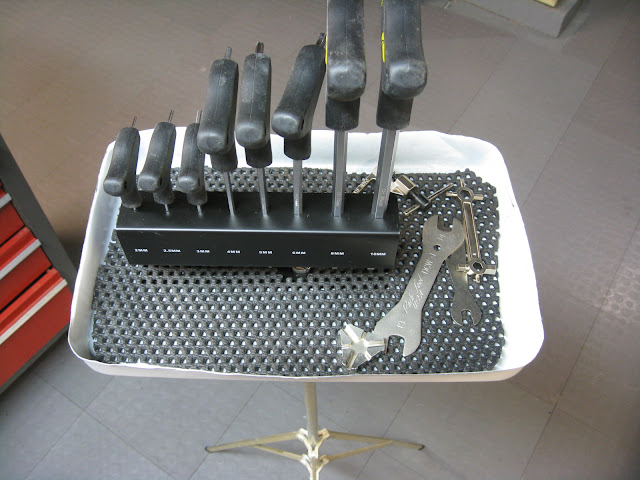 It worked like a charm. I would not put anything very heavy on it, but what it lacks in heft (and style) it makes up for in lightness and it can easily hold basic tune-up tools.  I look forward to using it when I work on my dad's bike next week.