Folding Bike Week: What is The Dahon Matrix? 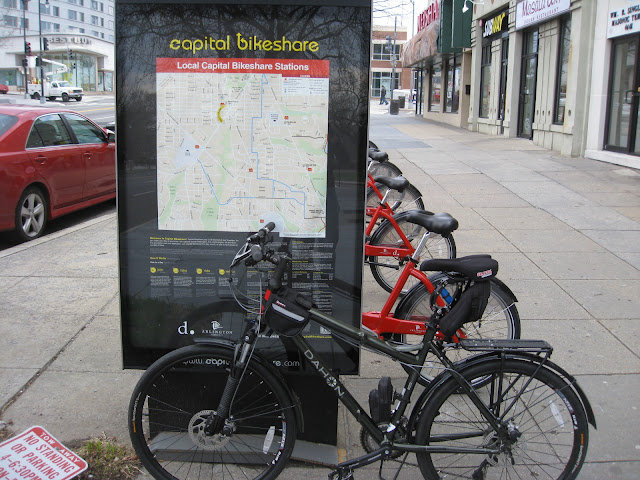 Two years ago this month I ordered a Dahon Matrix from Greenwich Bicycles. At the time, the recumbent was my primary mode of two-wheeled transportation and I wanted a bike that could get around Metro North's bike restrictions.

If you want to commute to New York City or New Haven from Stamford, Metro North is a good way to do it but they don't welcome bikes during useful periods of the workday. Bicycles can't go on the trains “scheduled to arrive in Grand Central Terminal between 5:00 AM and 10:00 AM” or on trains “scheduled to depart from Grand Central Terminal between 4:00 PM and 8:00 PM.”

In other words, you can't ride all the way to work, so you have to get a Saved from the Scrapheap bike to ride to the station and chain at one of the racks, which is what a lot of people do.

But folding bikes are allowed as long as they are not 32 inches in length when folded (that restriction wasn't in place when I bought the Matrix; it just said 'folding bikes are permitted') and even though the Matrix exceeds that by about an inch I think it must have been grandfathered in to the policy since conductors don't even glance at it half the time. 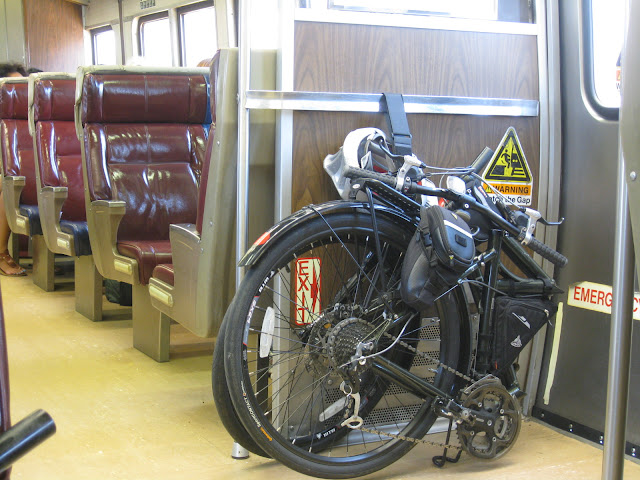 Conductors and passengers alike have looked at it admiringly and asked questions. Understanding that no one wants a dirty bike next to their trousers or pantsuits, I keep it clean and I use a Velcro strap to lash it to the vestibule so it stays out of the way.

And here's the best part: it's a really good and solid bike. 26” wheels and the Dahon-patented hinges are so well hidden in the frame I've surprised a lot of people when I suddenly fold it in half...or tell fellow cyclists in the wild that it folds. 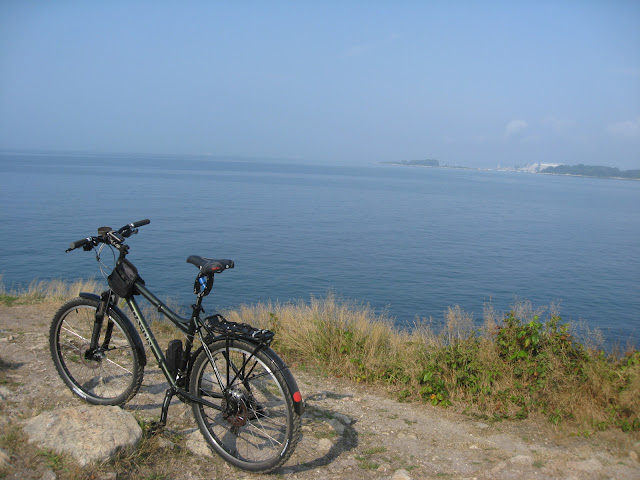 The Matrix isn't everywhere, but it's gone everywhere. I've taken it in the back of my dad's Honda Pilot when four of us went to Washington DC a few months back. I've brought it in the back of my Honda Element when I've had the rear seats in. I use it for my tandem attachment when my wife and I ride together. And of course I take it on the train. It's also the bike I use most of the time when I want to ride to work. I never fold it, but that's the beauty with the Matrix: it's a comfortable and solid bike that happens to fold.

I love this bike but it does have some drawbacks. Well, not drawbacks, but trade-offs: before I tricked it out with fenders, a rear rack and a Cane Creek Thudbuster seatpost it weighed 32.6 pounds. The hinges are hidden because you have to use a hex tool to open and close them, which means you have to keep the right hex tools with you when you want to fold it.

Also, unlike the tidy Brompton, it flops around when you try to carry it, so if you want to move the folded bike it's a two-hand operation. Because I put a rear rack on it, I've found that a simple Velcro strap wrapped around the fork and the rack keeps it all in place, and the rear rack itself doubles as a carry handle.

If you have a Matrix at home and you keep it folded in order to save space, you have to pick up a 32.6 pound floppy metal fish (or Shark, in keeping with the spirit of Shark Week) to move it from one place to another.

As I said in Monday's post, I admire how Brompton put little wheels on its bikes so you could roll them like a small suitcase. I decided to try to replicate that with the Matrix for its off-duty hours.

That meant I could finally get rid of my much disliked and obsolete build: 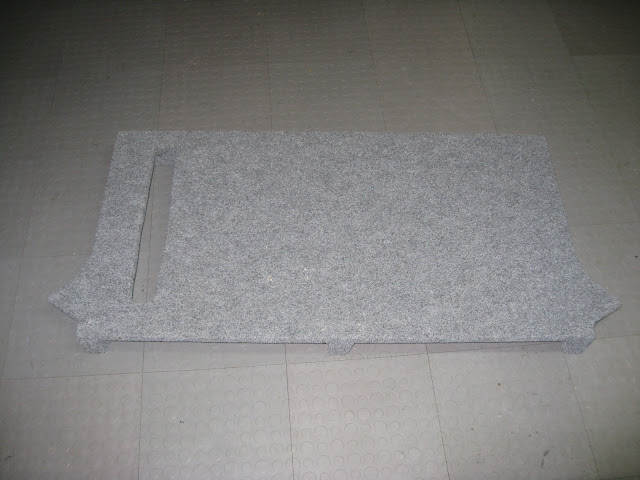 This, if you remember, is my first attempt at an interior bike rack for my Honda Element. I carved it out of plywood and 2 x 3s and it would drop into the space in the back. But it got in the way and made the handlebars on the bikes so high it would block most of the rear window. I of course replaced it with the Honda Element Bike rack I have today (made from the same piece of plywood). But now the Beta version of the bike rack was just clutter.

First, I flipped it over so I could start yanking out staples that were holding the indoor-outdoor carpet in place. I only removed the staples from three sides since I planned to use the carpet again. 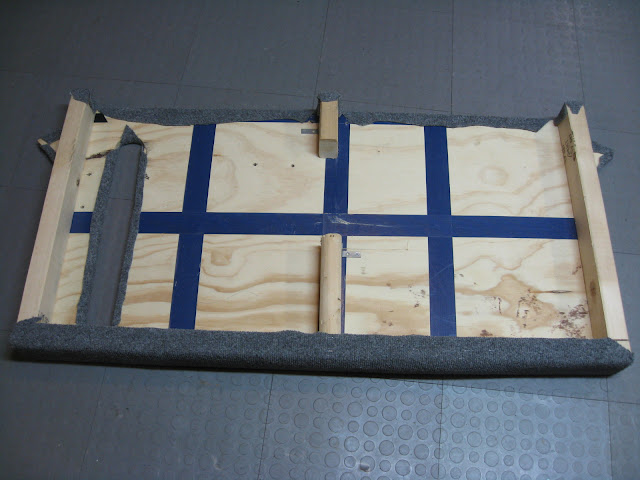 When I had put the front wheel of the Matrix in the slot on the Beta stand (that was the opening for my wife's Trek hybrid, which doesn't need to be disassembled to fit in the Element) I noticed the wheel would sit about ¼ of an inch from the ground. That would be perfect for what I had in mind, so I measured where the wheels are when the bike was folded and cut openings for them in the plywood. 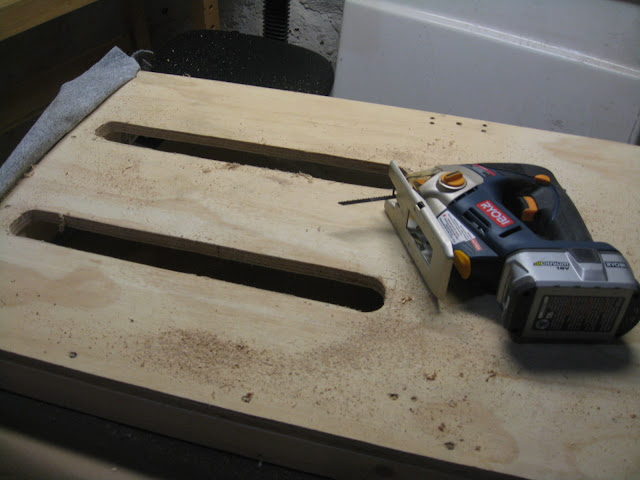 I cut the rest of the plywood so the Matrix would fit on it. Since I needed wheels, I naturally turned to my plastic tub of casters and roller blade wheels, which, like most of my clutter, sat dormant in the shop for many years before it came to my aid for this build. 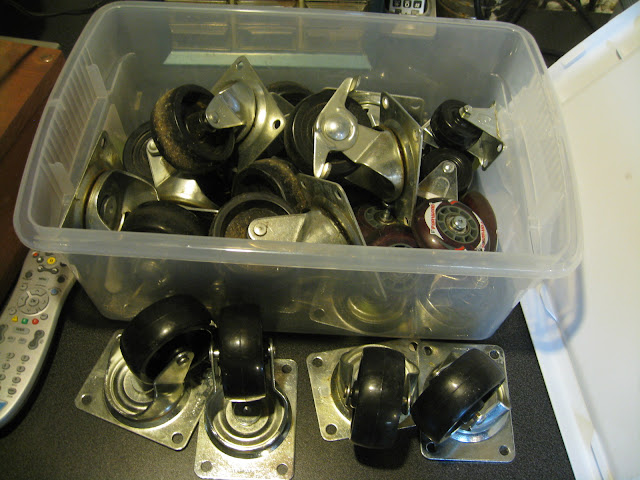 After I stretched the carpet back over the plywood, I stapled it into place. Next I cut slits in the carpet to accommodate the tire openings. Once I had scrounged enough screws to put the casters on I set to work attaching them. 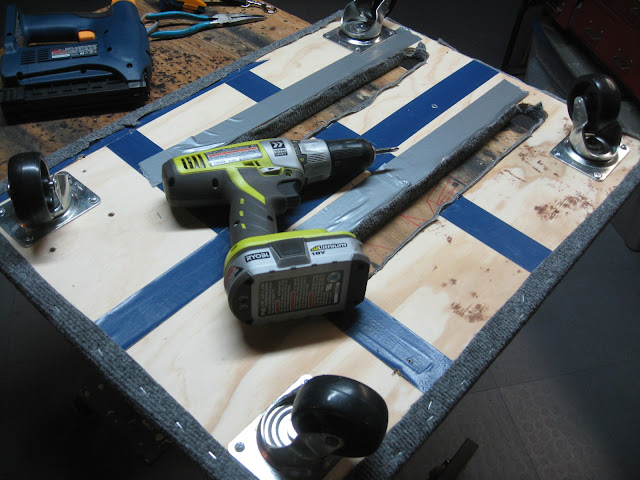 I flipped it over and set it on the floor. I picked up the Matrix and gently placed it on. This is what I had when I did that: I call it...the FolderRoller. 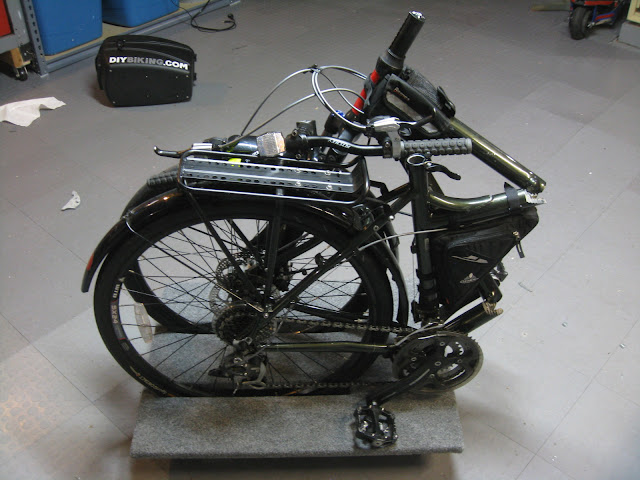 So if you have an apartment and want to wheel your Matrix or similar folder in and out of the closet, this is your build. You can also use it as a light furniture dolly when you change apartments or when your significant other moves in with you.

If you're from Dahon and you're reading this, thank you for making a great folding bike with few compromises, and I hope you promote it in honor of Folding Bike Week. And I hope to see royalty checks if you start making the FolderRoller.