The GoPro Hero 2...II: May The Camera Be With You, Always 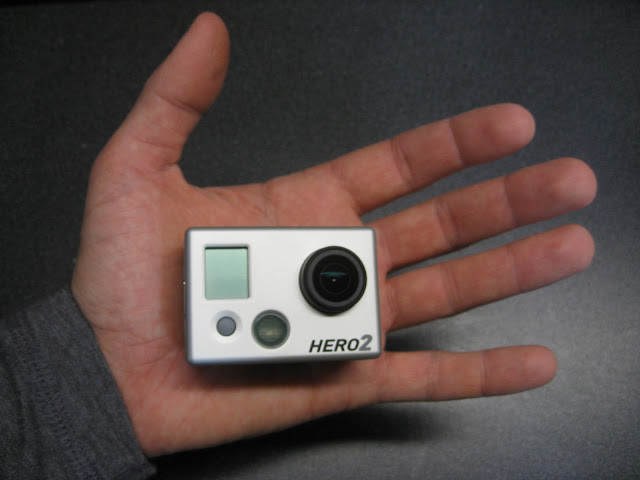 This is the second part of my two-part review of the GoPro HD Hero 2. Bought with some birthday money last Saturday, this camera has already traveled nearly fifty miles – not counting the distance traveled on the radio controlled car.

I had to search hard during the first ride, but I was able to find things about the camera I didn't like – though both problems will likely work themselves out as I become more familiar with it. Because the status screen is in the front, you have to put your face in front of the camera to see if it's working and on the function you want. Since it is mounted on the handlebars, there are a few accidental pictures of my upside-down face on the memory card since I'd have to crane over the handlebars to see if it was on the video mode. If the GoPro people decide to put the display screen at the top if a Hero 3 comes out, I wouldn't be surprised. Also, I found that when I'd take a video and then switch the camera off (to save the battery) it would land on the single-shot function when I'd turn it back on, so I'm learning to check for the video icon whenever I hit the power button.

But functionally, the camera is just brilliant, and I like it on my Flashpoint mount made with the boxlid. The first video I took – a two-and-a-half minute short on the road between Rowayton and South Norwalk – showed that the GoPro people really did their homework: not only was the picture perfect, but viewing the video on my laptop was easy (and I plan to ask my dad if he has an extra HDMI cable lying around so I can hook the Hero 2 directly to my TV).

The quality of that first video is great, so why isn't it here? You can see it if you do a DIYBIKING.COM search on YouTube if you like, but take my word for it: it's a lovely video but it isn't very memorable because the road I'm on was a bit boring. Since I'm not yet familiar with editing video or adding effects, I wondered if I could do something that would make the results a bit more interesting. A few minutes of hunting through some old boxes, and I found my answer: 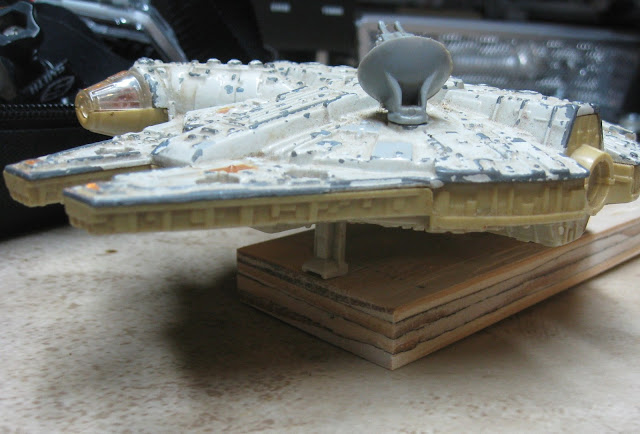 This, as I'm sure you know, is a 1979 die-cast Millennium Falcon. It is six inches long, so it is obviously not the version with the removable top and the secret compartment that you could jam action figures in. I have a lot of memories of the larger counterpart flying around my house (either my sister or myself carrying it at shoulder level) and it landing or crashing on different planets/pieces of furniture, but this one never saw a lot of adventure or excitement.

That was about to change. 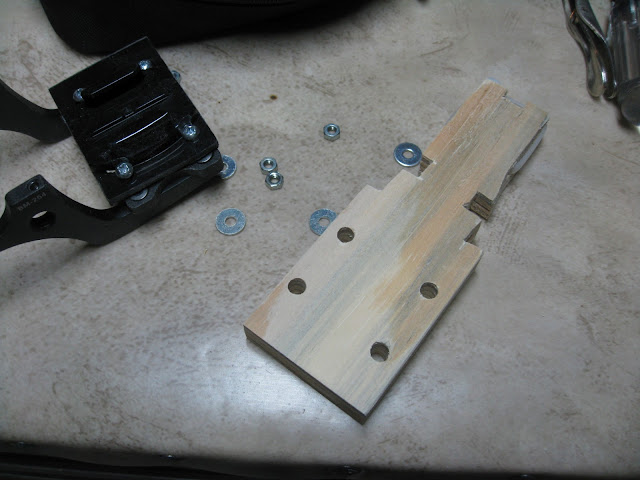 The nice thing about this build, other than it being remarkably simple, is that I didn't have to modify or damage the Falcon in any way, nor did I have to change the boxlid bracket I had built earlier: I cut a piece of wood to size, used a coping saw to notch out spots for the Falcon's landing gear, and drilled holes in the other side for the four bolts (that were holding the box lid bracket on the Flashpoint mount) to fit through. I bolted it all back together and attached the Falcon. 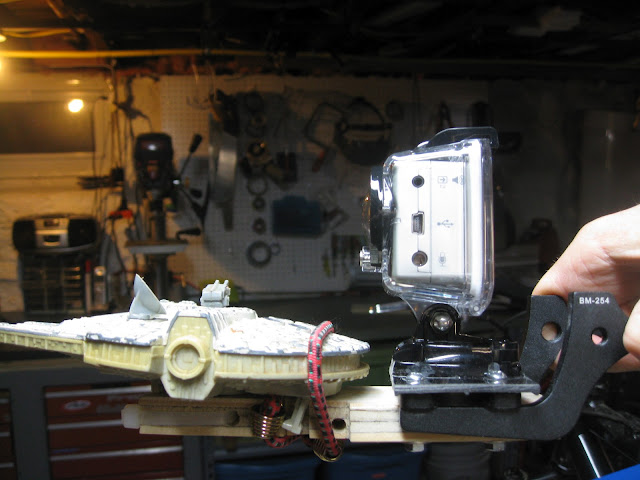 Holding the entire assembly (and probably looking a bit comical) I 'flew' the Falcon around the shop to make sure I had the angle of the camera right. When I was satisfied that there was just enough Falcon in the foreground, I was ready for my Friday morning ride on the Bike Friday. 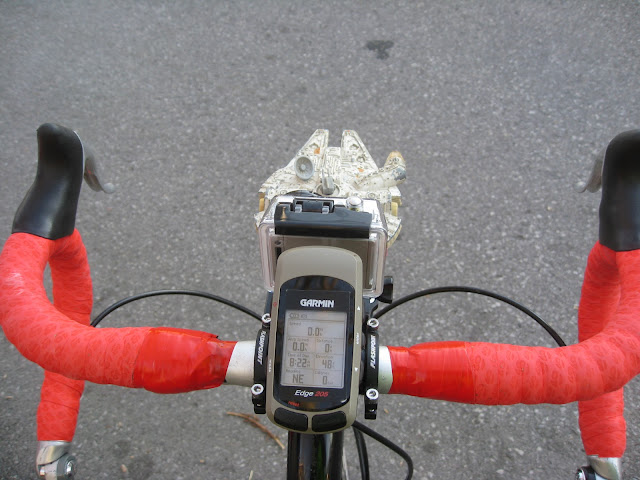 Well aware of how big video files are and my inability (for now) to edit video, I used the camera two or three minutes at a time on one of my favorite rides: Shippan Point to New Canaan. The route I go is about 21 miles round trip and I can enjoy coffee at the Connecticut Muffin Company at the halfway point. Since I had the camera and it was such a nice day, I took a different route through New Canaan to get to my destination.

Yes, I had locked onto the strongest power source: coffee.

Since the temperature outside had been steadily climbing all morning, it was a very comfortable time to walk with one hand on the bike and the other on the coffee. I wandered up Elm Street and mused that social networking sites and hokey blogs are no match for a good bookstore at your side, kid. 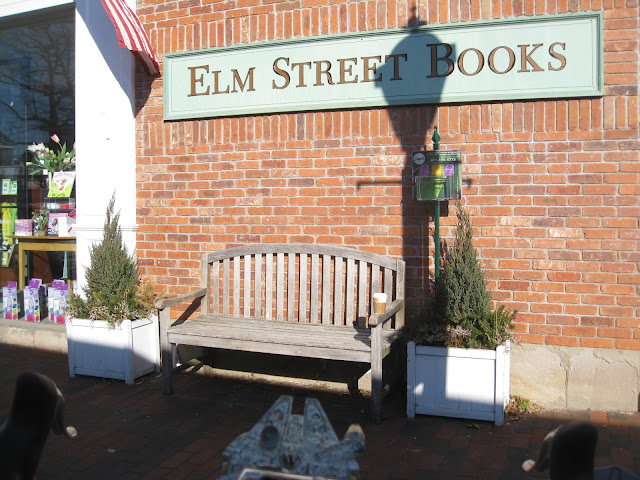 I headed further up and sat down on a bench in front of the New Canaan Playhouse. There I discovered something extraordinary: that bench appears to be positioned perfectly in that the winter sun reflects enough heat off the building and the sidewalk so as to feel almost 15 degrees warmer. I sat there sipping the coffee for a little while before riding back. 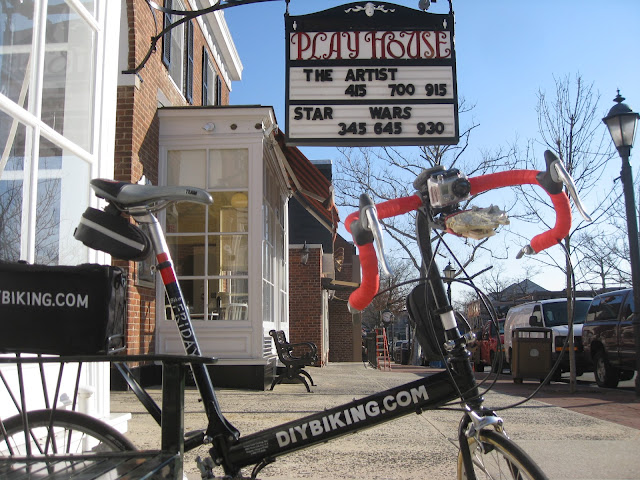 I got home and easily uploaded the videos of the Falcon. I'm sure I'll do other fun things with the mount and many toys will be taking flight in the weeks and months to come, but I'm also sure that the GoPro HD Hero 2 camera is great to take on any ride. And if you don't have to wait for birthday money to come in for you to buy it, get one now.

And if you want a 1979 Millennium Falcon? Check eBay.