The GoPro Hero2 (or: How I Spent My Birthday Money)

My birthday was last week. On that day I opened my mailbox and found a very nice card from my 90-year-old grandmother, who, to the best of my knowledge, has always correctly predicted the flow of mail from the U.S. Postal Service so that greeting cards would arrive on the exact day of celebration.

I sent a thank-you note promptly.

Last year the contents of her birthday card paid for the rims I bought online for my office bike which made it look so good someone tried to steal it last August). This year, I was thinking bigger, so I combined the birthday money she gave me with other birthday money (mostly from myself to myself) so I could buy something I've had my eye on awhile: the GoPro HD Hero2 camera. 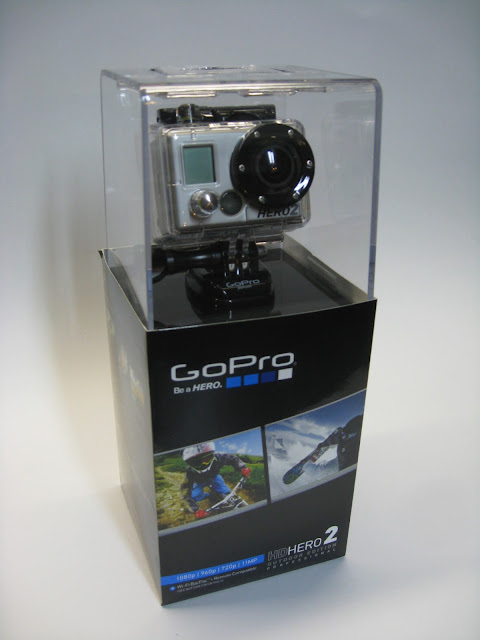 Yesterday morning, in an email to my dad I said I still had questions about it. After spending time researching it online I knew how well the thing has been reviewed, but I had never even held one. So the whole 'how is this thing going to feel in my hands?' question couldn't be answered until I went to a store.

I went to REI in Norwalk that same afternoon. Rather than ask an associate questions over and over only to leave and bargain hunt for the thing online, I asked the associate questions over and over until I thanked him for his included-in-the-retail-price-of-the-camera help and decided to buy the camera right out of the display cabinet. So I felt like I did something to reward physical stores for their customer service and paid close to $20 in sales tax (which is fine by me since the Connecticut state budget isn't going to balance itself).

As you can see from the first shot, the GoPro HD Hero 2 camera is an exercise of creative and possibly unnecessary consumer product packaging. When I took the plastic shell off the top, I removed the camera from the plastic bracket on the lid, which was very similar to the brackets one can use to mount the camera on a helmet, a dashboard or other vehicle. Two small boxes on the inside and I quickly took inventory. It did not come with the necessary SD card, but I was thankful the people at GoPro included several mounting brackets (two strap brackets, two flat self-adhesive brackets and two curved self-adhesive brackets). 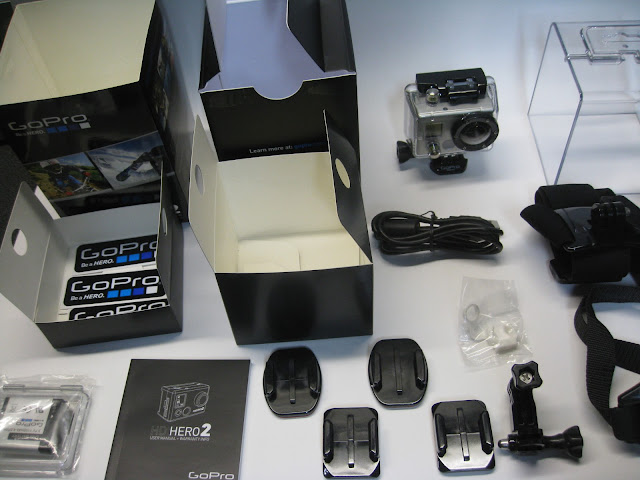 Of course, a big part of the camera's value comes from the durable housing the camera sits in. It comes with two lids: one waterproof - meaning I could take it snorkeling or kayaking if I wanted – and one vented cover. It says in the manual that the vented cover is recommended if the camera isn't exposed to water and/or traveling at speeds under 100 miles an hour so the microphone would be able to pick up sound better. If you want to attach the camera to one of those sea creatures in The Abyss, the sealed lid is what you want.

The guy at REI let me take the camera out of the housing in the store so I could see for myself how well it is made. I was pleased with my impression and surprised at how small the camera is. Here is the GoPro HD Hero2 next to Chewbacca for some scale. 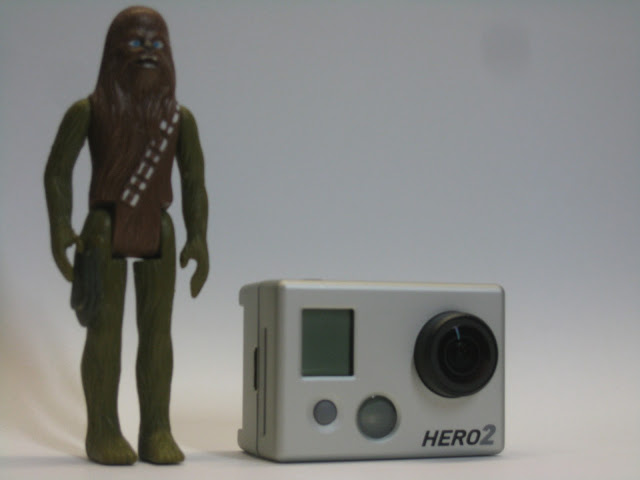 In or out of the housing, the camera can take HD video and still shots that can be five, eight or eleven megapixels (it goes up to eleven!) and with still shots I learned there is a setting which would allow me to take interval shots every 0.5, 1, 2, 5, 10, 30 or 60 seconds, which immediately made me wonder if I could passively use the camera to finally find out what kind of animal is living under my front porch.

But first, I wanted to figure out a way to make this... 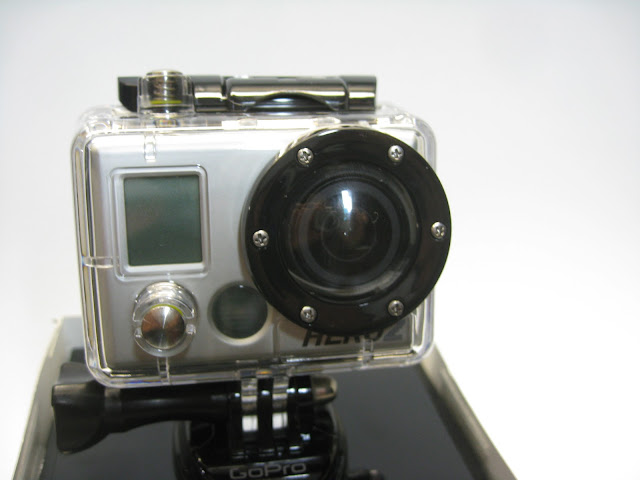 ...fit onto this (the Flashpoint bike handlebar mount my grandmother gave me for Christmas). 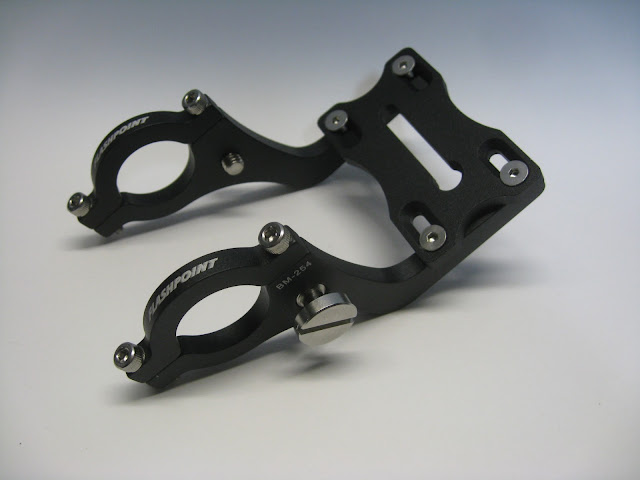 I immediately was going to just use one of the self-adhesive brackets that came with the camera, but I was a little nervous that the surface area of the GoPro bracket was bigger than the available mounting area. However, the display bracket on the box lid of the camera looked just as well made as the self-adhesive brackets. So I tore it off the box (I am confident I am not going to return this to REI) and set to work.

Once I centered the Hero2 bracket on the mount, I traced around it with a Sharpie and used a hacksaw to cut it to size. 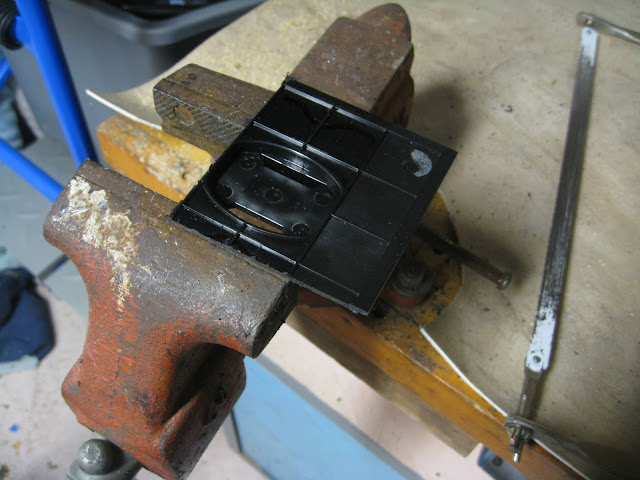 When that was done, I realized that this exercise gave me an additional bracket than the already generous number the GoPro people included in the box. I also realized I hadn't yet checked the video quality of the camera when in motion. Since it was dark outside at this point I couldn't do that, but lucky for me I have a 10+ year old Kyosho Mini-Z radio controlled car that still works beautifully, cracked tires and all. 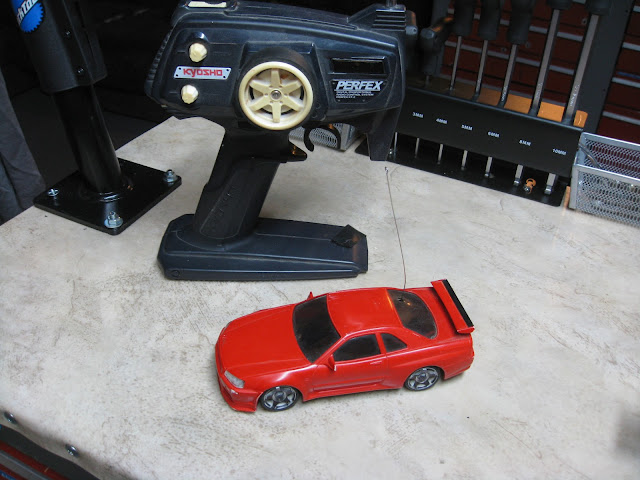 I admit it probably isn't the kind of sports car the GoPro people had in mind when they worked tirelessly to design this camera, but I didn't know how else to test the video without waiting for sunup. So I took my crudely made Hero2 'boxlid bracket' and attached it to the radio controlled car. 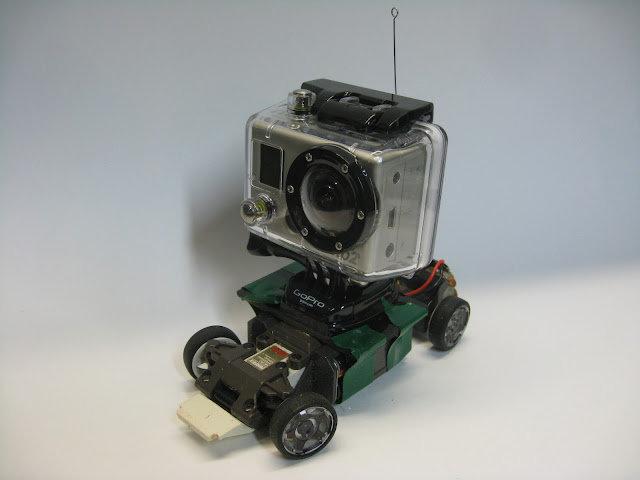 I turned everything on and set it on the ground. I drove it around the recently Roombaed shop floor for maybe a minute. Shortly after, I brought the camera upstairs and easily uploaded the video to my computer. It looked like a P.O.V. film of a small animal with excellent vision running around my shop floor. The impressive results I got from putting the camera on a radio controlled car made me realize I could, if I wanted, take a proactive approach in finding out what kind of animal is living under my front porch.

Still later, I removed the boxlid bracket and added holes so I could attach it via small bolts to the Flashpoint mount. The whole thing got placed on the Bike Friday, and is now ready to go. I'm aware that the lack of a viewfinder will lead to some trial and error when I try to figure out how best to use/mount this camera, but I thank the GoPro people in advance for making a really cool product – and for packaging it the way they did. 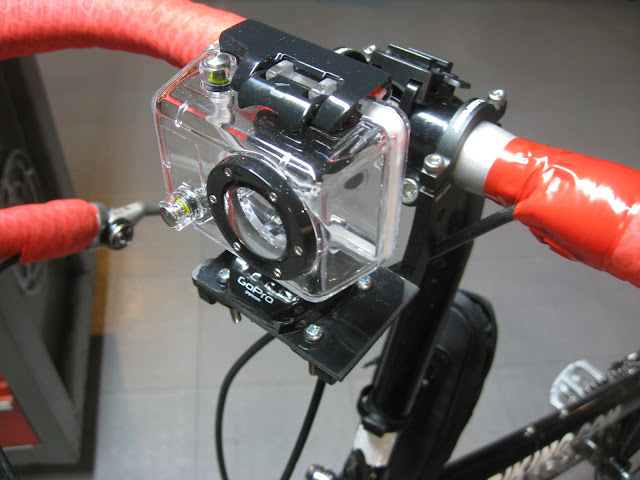