Once again, we have arrived at another Bike to Work Week. And once again, we are presented with little practical information for the reluctant bicycle commuter. It's unfortunate because this holiday (well, not a holiday...there's no Bike to Work Week greeting card section in Hallmark, is there?) shouldn't just exist for cyclists who already bike to work regularly. It should provide encouragement for those who never, not in a million years, thought about biking to work and are just completely unable to fathom the loss of all the little things that come with driving a car to to work.

Now as many of you probably remember, I did a post last year about the link between coffee and driving. In a car, you can put a cup of coffee from a local establishment in your cup holder in your car. Of course, there are cup holders available for bikes, but DIYBIKING.COM took it a step further by testing several different cup lids to see which would spill the least amount of coffee on your bike or on your person. The surprise winner last year was McDonalds. 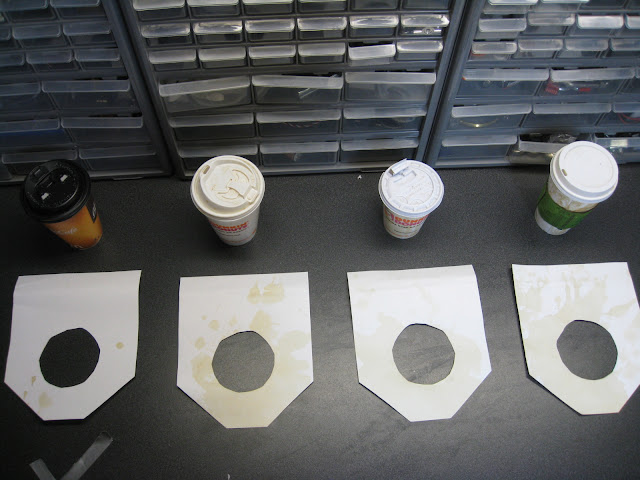 However, since then I have made an extraordinary discovery in the world of disposable coffee lids, or as the Solo Cup Company calls, 'premium hot beverage solutions.' It's called the...just wait a moment: the Solo Hot Cup Traveler Plus, which is available at select coffee houses as well as in lots of 500 for $57.87 on Amazon.com.

This lid - which can't be photographed because it is so beautiful - features a little tab in the back of you can slide to one side, which in turn opens a little slot from which you may sip your coffee. When you are done with your sip and the traffic light is about to turn green, you can close the little slot and set the cup confidently in your cupholder.

Now, the question becomes: exactly where can this cup be found? You can call ahead to your favorite local coffee shops and ask if their to-go cups have the Solo Hot Cup Traveler Plus lids, but because you're an active DIYBIKING.COM reader, you can save your cell phone minutes: this morning I called a place in Stamford that I suspected to be a carrier of the lid. While the woman on the other end of the phone sounded a bit bewildered that I was asking for the Solo Hot Cup Traveler Plus lid by name, I can confirm that the great Cafe Oo La La in Ridgeway Plaza in Stamford carries the lid. 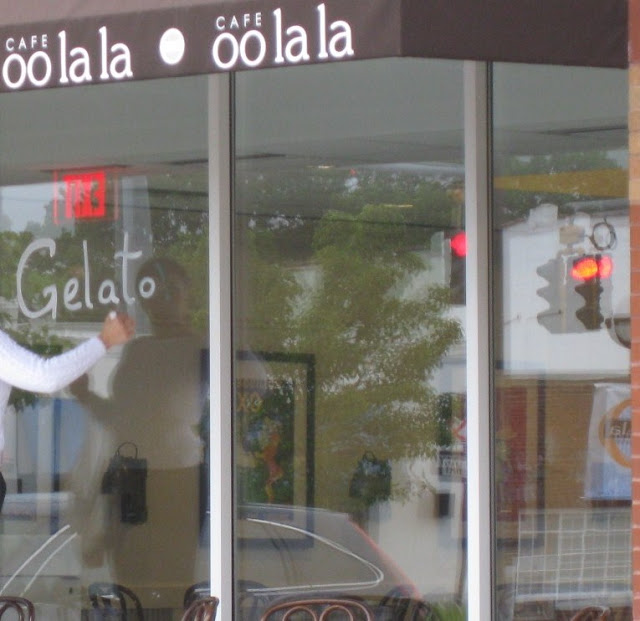 Whether you are a reluctant bike commuter or not, Cafe Oo La La, on 2325 Summer Street in Stamford wants you to get to where you are going with you coffee in your cup and not on your trousers, so if you ride anywhere near them, that's the place to go to get coffee.

Now, I acknowledge that carrying coffee neatly while cycling may not be enough to convince your car loving friends to give biking to work a try. There are other things associated with driving to work they may be reluctant to let go of. Such as....outside mirrors. We look ahead, we move forward, but we want to see what's behind us – both in a car and on a bike. To the latter end, guide the reluctant cyclist to a helmet mounted rearview mirror. 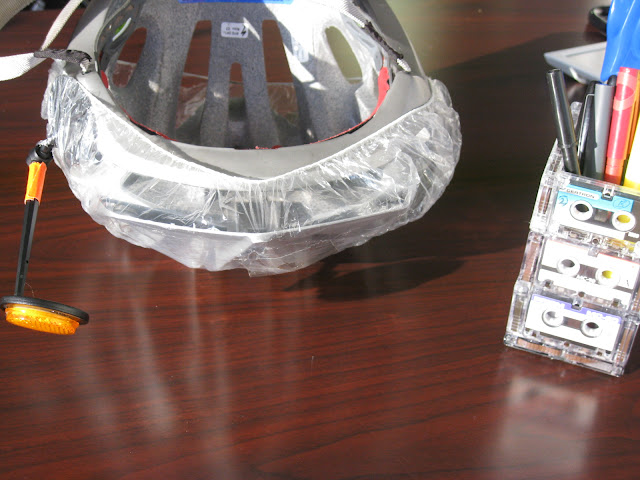 It's not the best picture, I admit, but you can see it there; mounted a few inches above and beyond the left eye. It's no substitute for a quick glance over the shoulder, but one can easily understand what is coming and how fast it is moving just by flicking the eye up and to the left. That and a helmet should help ease the concerns of a reluctant commuter when it comes to safety.

Now, carrying coffee neatly and seeing what's coming behind them may not be enough. They may want additional safety measures such as....a bell. 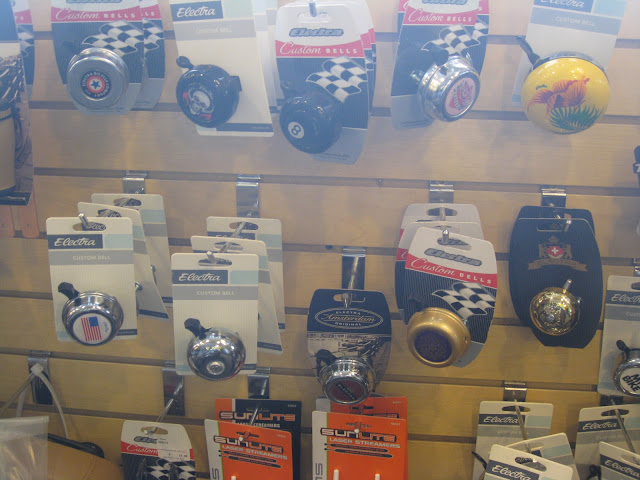 Some bike shops carry more than just the Incredibell (which is on a couple of my bikes), so when you take your Reluctant Commuter to the shop, work with them to find the bell that they'll like to put on their bike and enjoy ringing.

There may be what is known as a 'Class 5 Reluctant Commuter' who isn't interested in using a little bell to let their presence be known to the drivers and cyclists around them. So, if you are dealing with a Class 5 and you have the parts, the know-how and a disregard to passers-by, there's this: 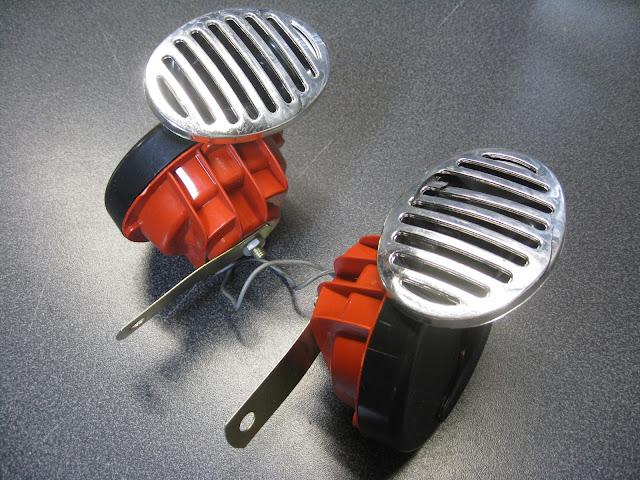 Let me just follow up by saying that just because I know how to install a car horn on a bicycle doesn't mean that I have done it or deployed it (the ICBM's are operational, but the launch codes are safe with me if you know what I mean). It also doesn't mean I believe in using it at all: commuters, regardless of transport, should get to where they are going without anger and there are some irritating things about cars that just shouldn't be brought into the cycling world (although I will concede it's tempting to use this horn on a bike when faced with a white earphones-wearing rollerblader taking up too much space on the West Side Greenway. So instead of a polite 'on your left!' which they can't hear anyway, a BLLLLLLLAAAAAAAAWWWWWWW!!!!! on the '78 Oldsmobile horn may encourage them not to keep the volume turned all the way to 11).

Speaking of irritating things about cars that shouldn't be brought over to the cycling world, we should take a moment to realize that yes: bikes, unless they haven't had much drivetrain maintenance, are in fact very quiet when they are in motion. However, there are non-bell, non car horn ways to deal with this as well – and a way to tap into some of what made cycling fun in the first place. 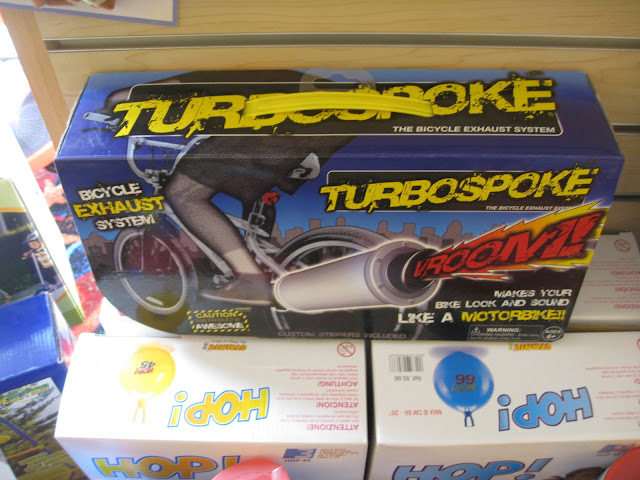 If baseball cards and clothespins are hard to come by, the right toy store and about $25 will allow the reluctant bike commuter to attach a Turbospoke exhuast system to their bike that will, in the words of the box copy, make it 'roar.' 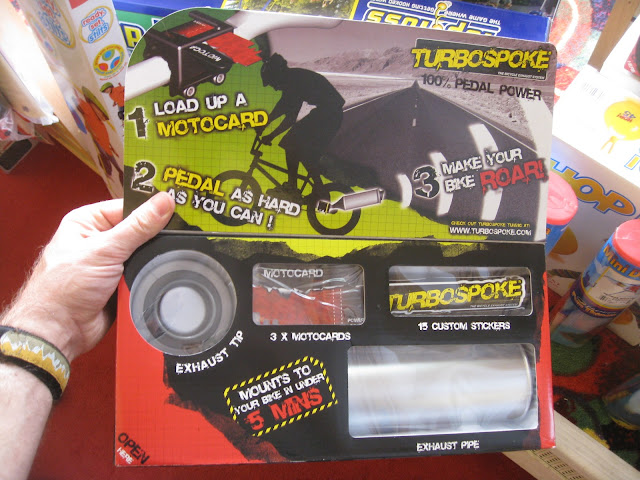 I haven't tried this yet, but I have little reason to believe that the product doesn't work as advertised. So imagine if the sound of scores of cars moving around your local downtown was replaced by the roar of scores of bicycles. It's noise pollution, yes, but it isn't actual pollution, which is part of why Bike to Work Week needs to be promoted anyway. 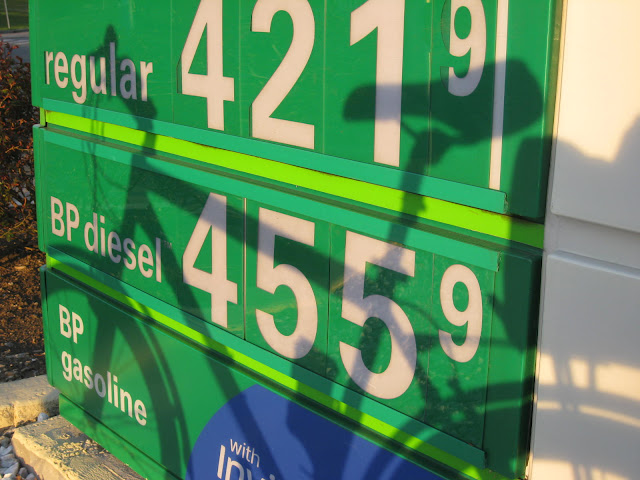 Speaking of noise pollution: the Reluctant Commuter may have something called a car alarm installed on their motor vehicle. We all know that when we hear a car alarm going off, we immediate run, run, run to the source of the noise to frighten any would-be car theives away. There are unconfirmed reports of car alarms going off because a person commits the unpardonable sin of standing too close to a 1997 Porsche Boxter or the alarmed cars are parked too close to a place where fireworks are being set off.

I do not have the sophistication to bring the same security miracle to bikes, but I can offer this: 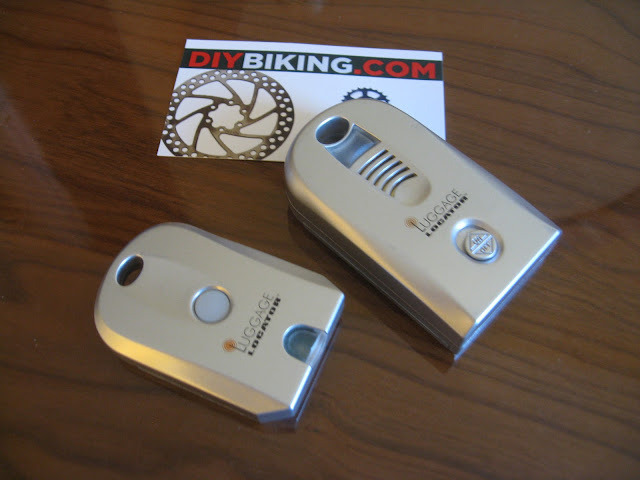 I can't remember where I bought this (nor do I recall why) but this is something called a Luggage Locator, which comes with a small transmitter and a slightly larger receiver. Here's how it works: you switch the receiver on and attach it to your Samsonite suitcase and keep the transmitter with you, so if you are trying to find your bag in a bus terminal or the like you can switch on the transmitter and press the button in the middle. If you're within maybe fifty or sixty feet of the receiver, it will give you some audible beeps.

So, if you are dealing with a reluctant bike commuter and they have a level of comfort with their cars and a paranoid devotion to their car alarms, you can give them this. Tell them they still have to use an ordinary bike lock when they lock their bike up, but they can hide the Luggage Locator receiver on the bike, and, as they are walking away, they can point the transmitter at the bike and push the button. Any would-be thief watching or within earshot will likely believe that the reluctant bike commuter isn't a reluctant bike commuter at all, but rather a menacing, with-it individual who obviously invested in a very sophisticated security system for their Townie.

And, with that, I urge you all to reach out to the reluctant commuters in your life (by forwarding this important message their way) and provide support and encouragement to everyone who thinks our jerseys are ugly and our shoes are too expensive. Have a great Bike to Work Week and please ride responsibly: don't text and/or eat corn-on-the-cob while pedaling.