Building (Another) Mountain Bike...and Messing Something Up

If you do build your own mountain bike on a $97 starter hardtail frame (as I did) you may want to eventually upgrade to a full suspension bike. Lucky for me, my cousin sold me a good Specialized frame that already had a excellent shock mounted within, so the rest of the project was mostly about moving parts from one bike to the other. This project is one of the great things about having two Park Tool PCS-12 workstands mounted side by side on the same workbench. 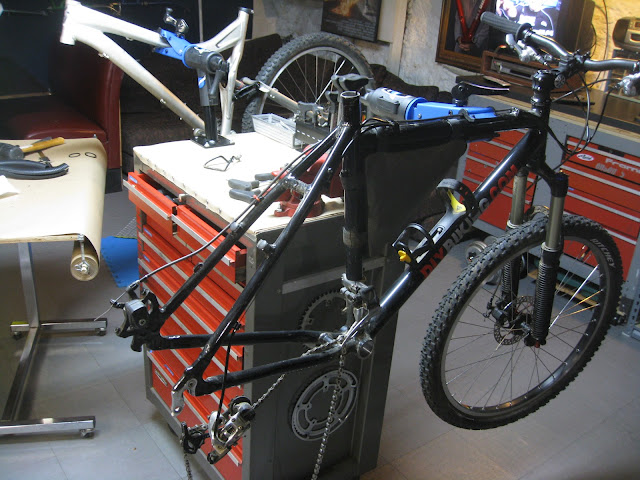 It took me less than one episode of Top Gear (the original, BBC version, of course) to move 90% of the parts over. Fresh off the crank upgrade I gave the Bike Friday, I did the drivetrain first and just worked my way up. I did need to use some new tools this time around: for instance, to remove a headset from one bike and keep it usable, a headset removal tool is really the only option. 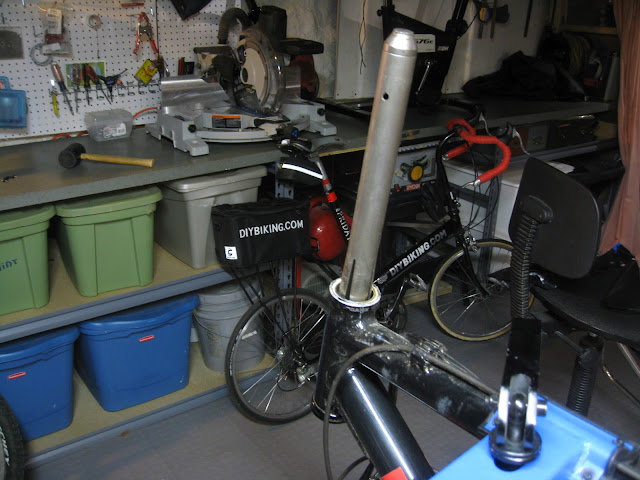 Also, I didn't have a headset press (or, more importantly, a croquet mallet) to put the headset on the new frame, so I broke out a rubber mallet and pounded it in as gently and firmly as possible. 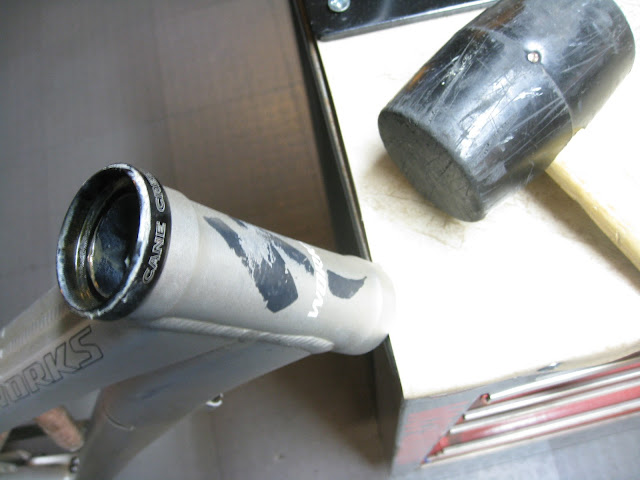 By the time the 'Star in a Reasonably-Priced Car' segment had ended, I nearly had a normal-looking mountain bike and I was pretty excited about it. Not only did it look good, but I was convinced it would be the most comfortable mountain bike ever thanks to the Cane Creek Thudbuster seatpost. I know you don't normally see suspension seatposts on full suspension bikes, but I thought it was time to redefine what full suspension meant. 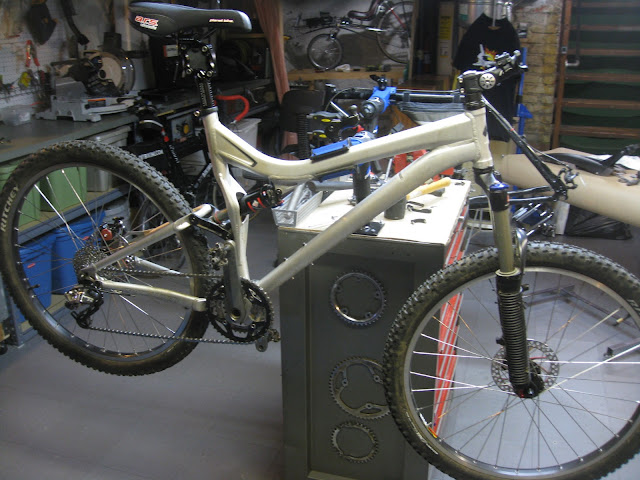 However, as soon as I put the handlebars on, things went awry.

The cables went on easily enough after I cut the pieces of housing to the appropriate lengths. But for whatever reason, the cable on the front derailleur was too short. No problem, I thought. I had plenty of other shifter cables. So I took a wrench and properly unscrewed the shifter screwed myself out of a functioning shifter. What the picture below shows? Never do that. 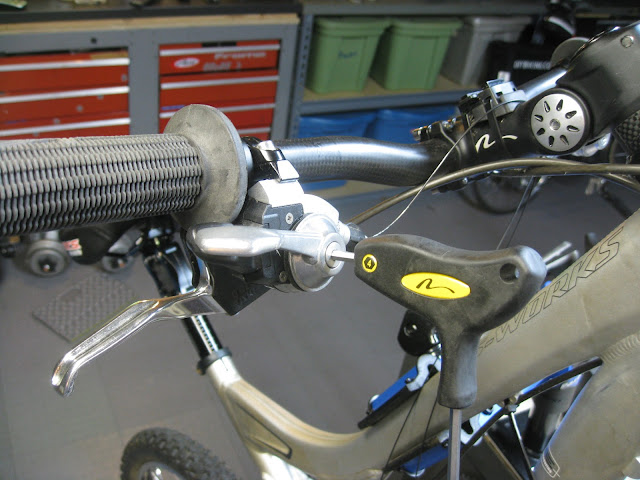 There are times when lessons are learned the hard way. This was one of those times. I unscrewed the largest and most obvious-looking bolt on the shifter and instead of being able to remove the housing, a tiny metal spring leapt from the handlebars and scampered across the shop floor.

And I couldn't put it back in. 90% of the bike was built, but I spent the same amount of time on the 90% trying to fix the mistake I made with the 1%. Getting the spring back in was like the last three seconds of every losing Tetris game I ever played.

So it was game over for what was once a functioning shifter. I removed it the rest of the way and soon discovered that even if I hadn't broken it, it wouldn't be able to connect to the derailleur that was off Mountain Bike 1.0 anyway: the downtube was thicker and the design had the cable coming in from the bottom rather than the top. So I attached everything else from 1.0 (save for the brakes; after the poor showing at the Northeast Kingdom in Vermont last fall I upgraded to a new set of Avid ones).

Eventually, I realized that I needed to do something I probably should do a lot more often: visit a bike shop to get the expertise and the parts I needed. Although all the systems on the new bike were not yet operational, I decided to take it straight to the Stamford train station to head to Greenwich. 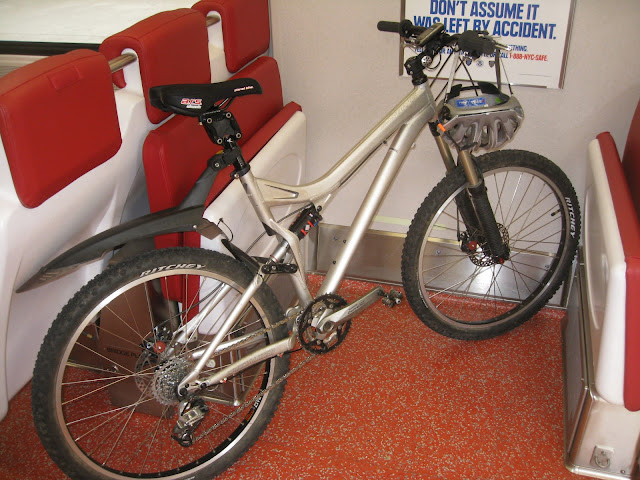 On the way to the station – and later on the ride up to Greenwich Bicycles - I was impressed with the suspension and may have looked disturbed or comical as I made an effort to hop every curb and hit every pothole and run over every obstruction just so I could revel in the comfort of the ride. This would be a great bike, I thought. 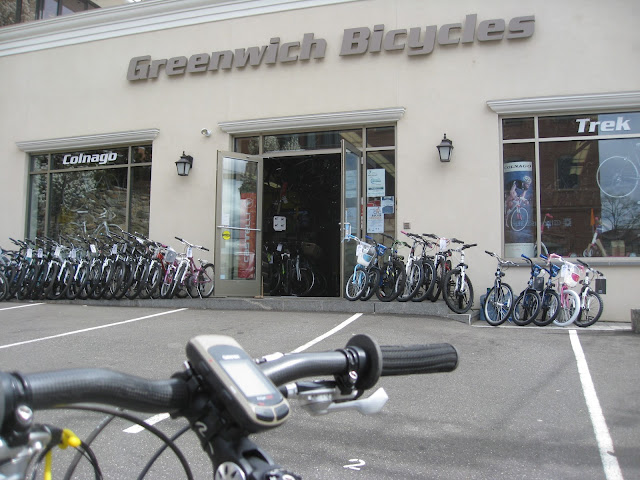 At Greenwich Bicycles, I wheeled my new ride right into the shop to get the expertise to get me rolling again. Thankfully, the reactions I got from the owner, Rob, as well as his employees who saw the bike didn't recoil in horror or make any I-hope-you-didn't-pay-too-much-for-this-on-eBay comments: they found me a derailleur that brought up the cable from the bottom bracket and a new shifter...that doesn't match the old one but works great anyway. The value of the expertise and great service was built into the cost of the products I bought, and I left with a valuable lesson: when you're building or taking apart a bike, know when you are out of your depth.

I returned home and, once I had the shifter and derailleur installed and adjusted properly, took the bike for a short and slow ride...across the breakwater at West Beach with the big, pointy rocks. I admit it was a little bumpy, but it crawled across easily. If it had a holster for a chainsaw and another for a shotgun, it would be the perfect bike for a zombie apocalypse.

That left me with just one last thing to do. 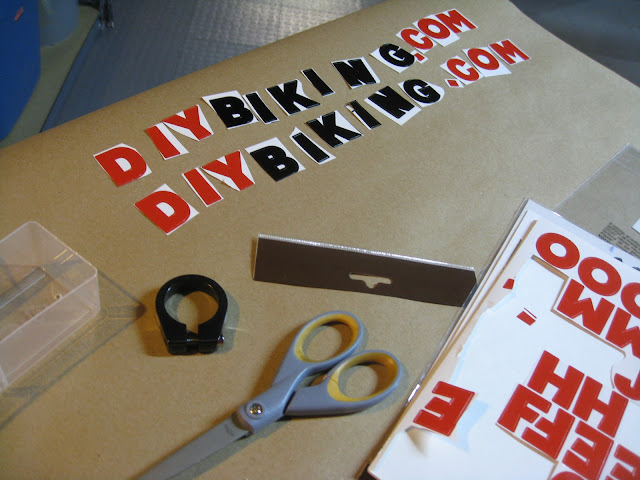