Around the same time I was putting more gears on the recumbent, I was taking them off the Bike Friday: the 52 tooth chainring was quite bent and after six months of owning that bike I had never, not even once, used the smallest ring on the crank. Wondering if I'd regret it later, I decided to change out the 52-42-32 for a 53-39 I found on clearance. 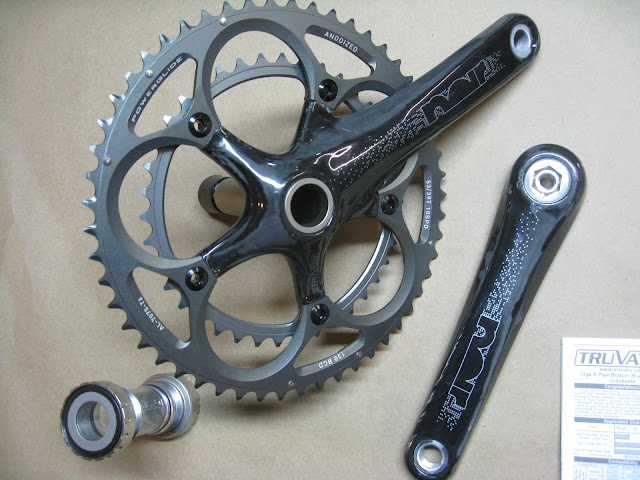 Not that I'm becoming one of those people obsessed with weight savings, but the new crankset is more than half a pound lighter (take that, metric system) than the one I removed, and that means a lot in a bike I have to carry in and out of airports.

Since I had some experience with the crankset on the homemade mountain bike (and removing old cranksets from Saved from the Scrapheap bikes) I found it a fairly drama-free install. 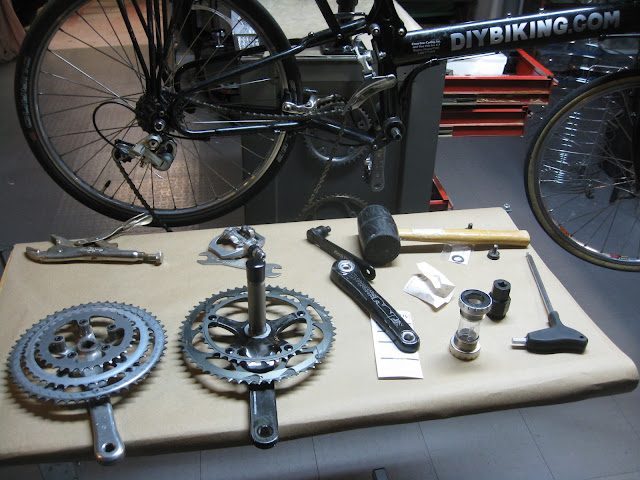 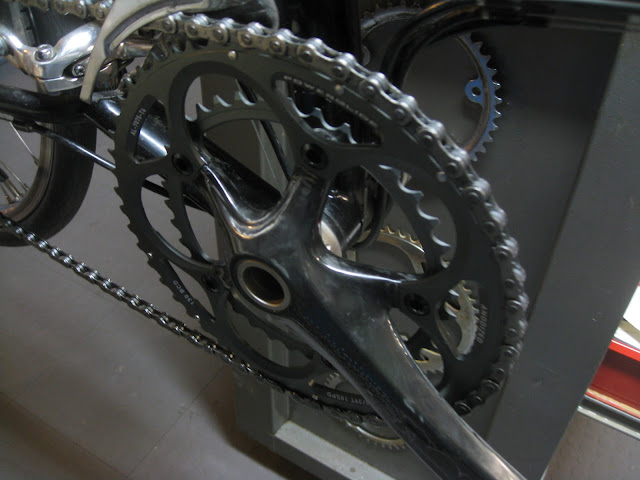 Just the sight of it on the bike made it look like it could go faster, and I wondered if that extra tooth on the new and unbent chainring would make a difference. So on a recent Friday I took the Bike Friday and headed to New Canaan - about ten miles away - as fast as I could. I also had a 'beat the clock' mentality since I needed to go to Fairfield early that afternoon to meet my cousin - the Mountain Bike Jedi Master himself - for lunch.

Of course, on a day you want to go fast, traffic lights and other things conspire to slow you down. 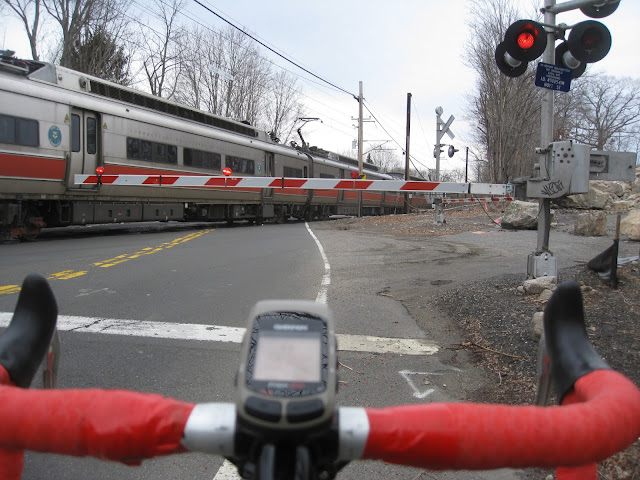 After Metro North passed by, I continued up 106 and built up some speed as I passed Barringer Road. Moments later, the bike rolled past something shiny in the road that looked like a credit card. With my curiousity stronger than my willingness to ride fast, I stopped, turned, and went back.

It was a credit card. It belonged to a woman named Stacey.

It looked as if it hadn't been in the road very long and I wondered why it was there. As I tapped it in my hand I glanced up the road and saw a rectangular white object that I didn't notice before. I walked the Bike Friday up to it.

It was a AAA card. It too belonged to a woman named Stacey.

Mindful not to walk too much in the morning traffic, I walked the bike further up 106. Within twenty feet I found a Starbucks card and within 20 feet of that: a debit card.

All belonged to Stacey.

I tucked all those things together and, when I couldn't find more, put them in the bike bag and continued pedaling toward New Canaan. I tried to imagine what led those cards to be in the road like that and thought someone may have thrown them out a car window after stealing cash from a wallet (or something like that).

I passed under the Merritt Parkway and ascended the hill that passes beneath the Metro North tracks and, thankfully, did not miss the tiny chainring. However, just when I got to the top of the hill I checked my phone: my cousin had left me an apologetic voice mail: he had to postpone our lunch.

Now I didn't have any real or imagined reasons to rush through my ride. I decided to continue on to my favorite New Canaan coffee shop - Connecticut Muffin Company - and sit for a little while.

I had a mystery to solve. 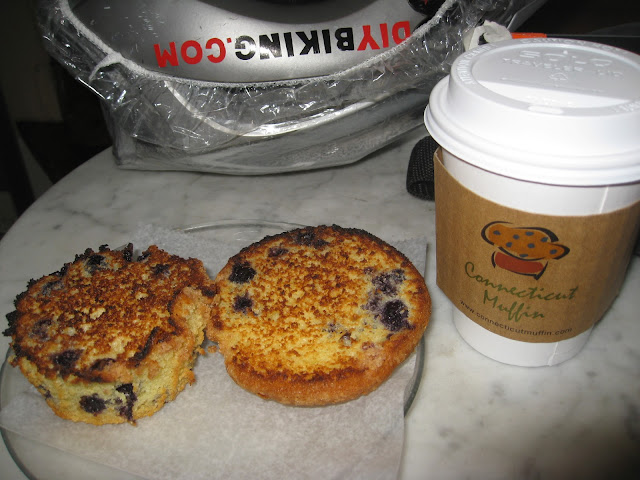 I took out my Droid Incredible 2 as well as a tiny notebook and tried Googling Stacey: First name and last. Middle initial, I get a hit on the middle name. Eventually I get a link to an address several towns away. I call the phone number and got no answer.

I turn back to the Internet and eventually find a quote from a news story she (or someone with the same name) was quoted in. It confirmed the town she lived in, but the news story mentioned she worked in New Canaan.

I Googled her name and 'New Canaan' at the same time and soon ended up with a work address. By bizarre coincidence, it was a very short walk from where I was sitting. It was the first of what would turn out to be several what-were-the-odds? moments.

I didn't even unlock the bike from the front of Connecticut Muffin: paper coffee cup in hand, I walked down the street - cleats scraping on the sidewalk - and eventually found the office where I thought Stacey worked. An attractive woman at the front desk asked if she could help me and I politely asked if Stacey worked there.

With a smile she said that Stacey did work there, and that I could sit down and wait for her.

I sat in the lobby, and a couple of minutes later Stacey appeared. I introduced myself - just first name and last; didn't mention this blog - and presented her with the cards I found. She jerked as though she had been given a mild electrical shock: she excitedly explained she had left her purse on the roof of her car that morning. Stacey thanked me profusely though I felt bad I hadn't looked harder for the rest of her belongings - of course at that point I didn't know there were belongings to look harder for. I said goodbye, left the office, and retrieved my bike to make the trip to Darien down Rt. 124.

Soon after I made it to Rt. 1, my cell phone rang. To my surprise it was Stacey. I realized I hadn't left her a DIYBIKING.COM business card but then I remembered that two can play at this Googling game.

It turned out she just wanted me to reconfirm where on Rt. 106 I had found her cards as she was trying to hunt for the rest of her stuff. I told her the precise area, and she thanked me again before we parted ways.

The weekend allowed me time to make that inaugural trip to Smart Cycles in Norwalk so I could hunt for the parts I needed to fix the recumbent. I also rescheduled my lunch with my cousin and generally filed that unusual Friday ride away.

Until a couple of days into the new work week, when I opened my mailbox: inside was a handwritten thank-you note from Stacey telling me how much she appreciated the time I spent trying to find her, a box of Girl Scout Cookies (Thin Mints) and a $25 gift certificate to...Smart Cycles. I was initially rendered speechless at such a thoughtful and unexpected gesture. 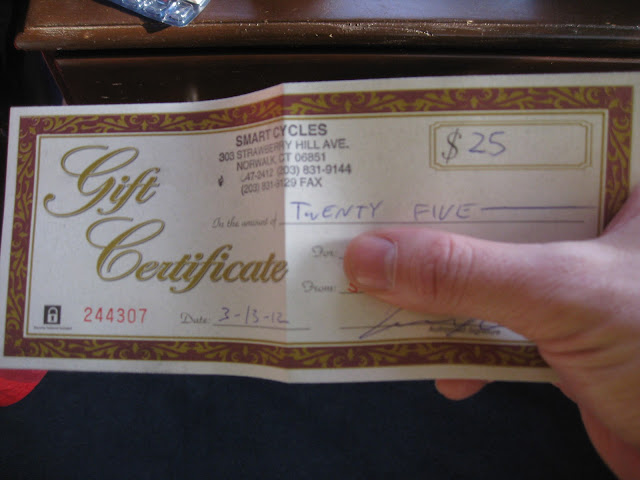 The really weird part is that I got all this before I had written about Smart Cycles for my Risky Bike Surgery II post. And not only did Stacey work within walking distance from my usual Friday-morning-ride coffee place in New Canaan, she lived a short walk from me in Stamford - according to her return address. The whole thing seemed a cross between a 'meet-cute' and a cold open from an X-Files episode.

But anyway, all I had done was find some lost property from a stranger who responded with an incredibly kind yet unnecessary gesture. She had already thanked me a few times and it really wasn't that big a deal to find her - and finding her was a fun puzzle to solve. A note? Cookies? A $25 gift certificate to a great bike shop? Who does this Stacey person think she is?

I quickly answered my own question: she's the kind of person anyone would like to know, the kind of neighbor anyone would love to have, and the kind of motorist any cyclist would be happy to share the road with - provided they can dodge the purses as they fly from the roof of her vehicle (though I doubt she'll make the same mistake again).

Not wanting to let Stacey's thank-you gesture just be the end of this already unusual Friday Ride Aftermath, I decided her impressive note/certificate/cookies-combo deserved at least a proportional response.

The first thing I did was mail the Thin Mints to a friend of mine in Napa, California who I haven't seen in a long time who likes them. For anyone who knows me, chocolate often gives me headaches, so I thought the cookies would make a nice care package (I still remember how happy I was during college when my mother would send me cookies, and I hoped these would have a similar effect on my friend and her daughters).

My Napa friend called a few days later to say thanks. Stacey's gesture had officially gone nationwide. So far, so good.

Now the gift certificate to Smart Cycles. I waited until my next Friday morning ride - when we had unspeakably beautiful weather - before riding out to Norwalk to visit the store. The gift certificate and a few extra bucks vanished in minutes as I bought two 26" bike tubes and a few things by Park Tool: tire levers, a patch kit, and a compact chain tool. 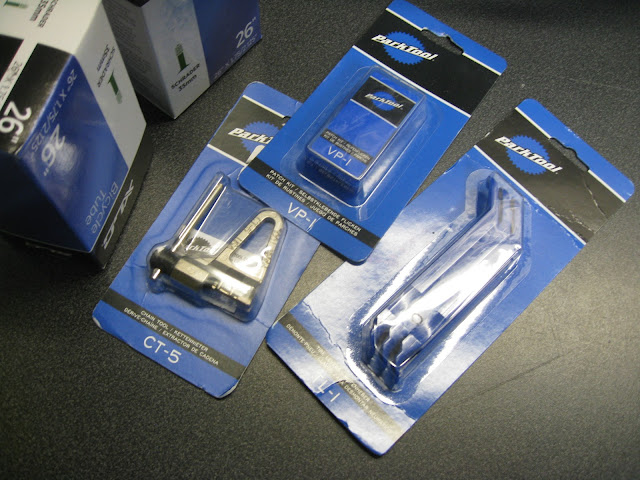 A couple of days later (which is a couple of days ago), I rode my Dahon Matrix to work with all of those things wrapped in the bike box. I cut out of the office early so I could head to the Domus charter school; specifically the Trafigura Work & Learn Business Center which teaches at-risk youth small engine repair and bicycle repair - I hadn't been there since I used the bike trailer for the bike drive last fall. Mitch and Mario, the great guys who run it, greeted me when I arrived at the classroom. Just being with them and the class in that room always makes me feel smarter. 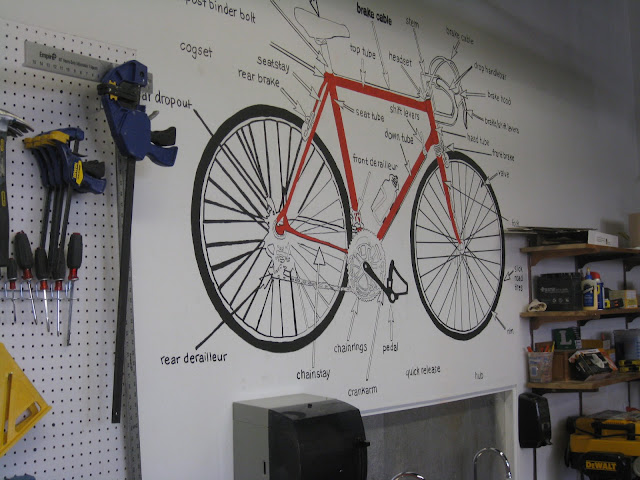 I had learned ahead of time what kind of tools they were often after for the program, and I presented the contents of the bike box to them and told the guys, and the class, all about Stacey: from the ride up Rt. 106 to the gift certificate to Smart Cycles to that afternoon. And like Stacey, they put together a thank-you note. 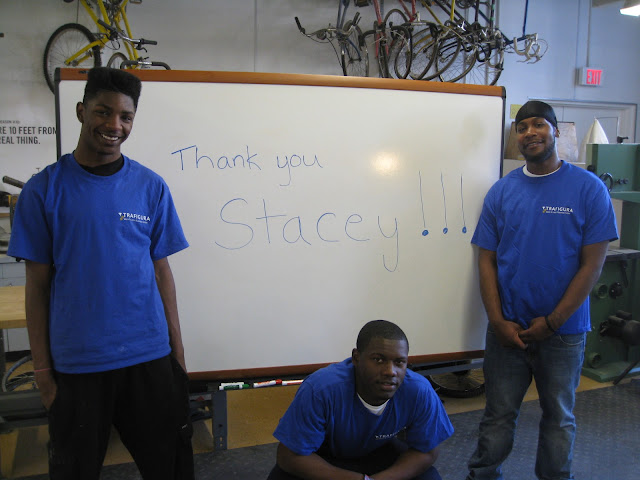 While at Domus, Mario told me the group is once again actively looking for bikes to repair and tools to repair them with, and if anyone has any bikes or bike tools they'd like to donate to the program please contact him at msarro@domuskids.org or come visit Domus at 83 Lockwood Avenue in Stamford, Connecticut, 06902.

At that's the end of this post. I guess the lesson here is to not pedal too fast when you're on a recreational ride - even if you have a new chainring. You could miss a detail that makes the ride interesting. Also, if you come across a Stacey in your life, be sure to come up with a way to say thank you.