An Alternative to the Criminalization of Walking

At quarter to six yesterday morning, I was in my shop sipping coffee when a story came on News Channel 8. A nearby Connecticut town – I forget which one – had decided to 'crack down' on people who were using shopping carts to bring their groceries home from the supermarket. Apparently the police were going to be carrying garbage bags with them so the person they had caught with the cart would still be able to bring their food home.

My first thought was: they can't use plastic bags to get their food home. Why else would they be using a cart?

The story annoyed me for other reasons. First, quite a few of these grocery store parking lots are so small a lot of people probably have to bring the carts outside of the lots to find their cars anyway. Second, and this is really the main point: a lot of people can't afford (or drive) cars or even bikes with panniers bags or trailers to bring food home. Some of them are poor and have a family to feed, hence the need for the cart.

I also wondered what other things the police officers responding to the missing carts could be doing with their time. I've never been a police officer, but after watching five seasons of The Wire I think I know that some of them may be wondering the same thing the first time they suggest to a person with 40 pounds of groceries that they need to surrender their shopping trolley. 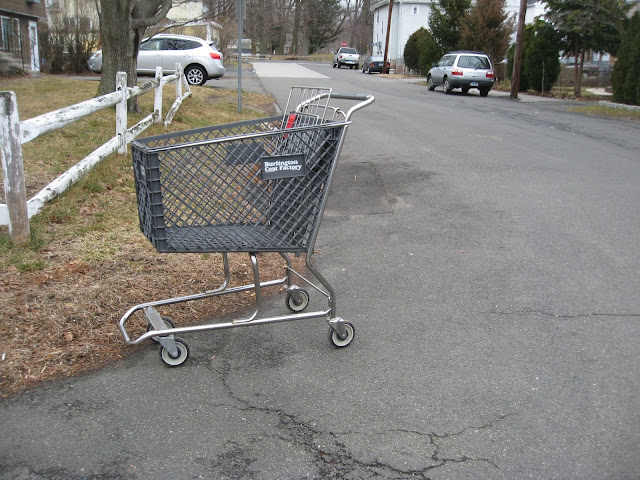 Now I do see the point of view from the grocery store owners – carts are expensive, you know - I'm just sure there is another way to look at the vanishing cart problem. I don't work for a grocery store, but if I did I would say: “You know, I think it would help people with parking if we have small courtesy trolleys with a huge logo of our grocery store on them that works like the thing at the airport: put the money in, get a cart. Return the cart, get the money back. Pedestrians get their food home easily and our store gets mostly happy, possibly attractive people pushing portable billboards around town.”

And the person I'm saying that to would go: “Why didn't I think of that?”

Until my 'courtesy cart' plan is put into place (they can even spell 'courtesy' or 'cart' with a 'k' to make it sound cuter) there are people around who do bring grocery carts home, and when they do the store runs the risk of losing out on the cost of the cart and the cart itself may not look as good in a non grocery store surrounding – to put it mildly. 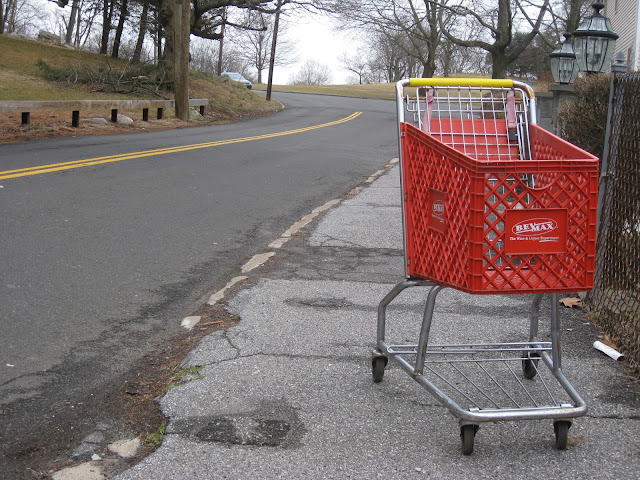 To show that I wasn't completely insensitive to both unsightly carts abandoned in public places and to the grocery stores themselves, I decided to take a little bit of action. So I got the trailer I used for the Domus bike drive and fitted it to the Dahon Matrix. 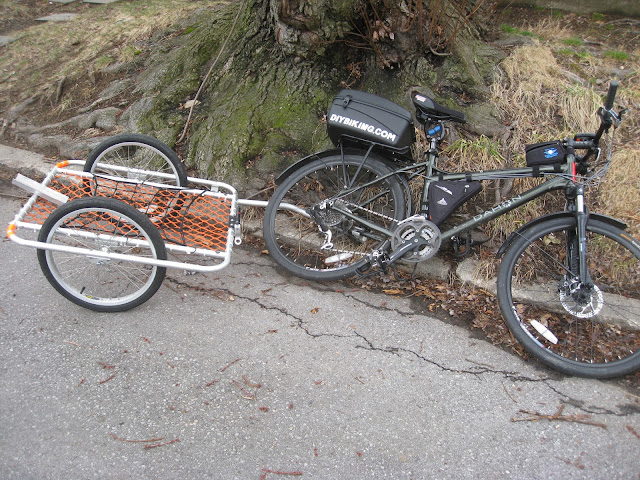 I rode down the street and didn't have to go too far until I found my first candidate: a gray cart with the Shop Rite logo on the side, completely identifiable. I carefully flipped it over and lashed it to the trailer. 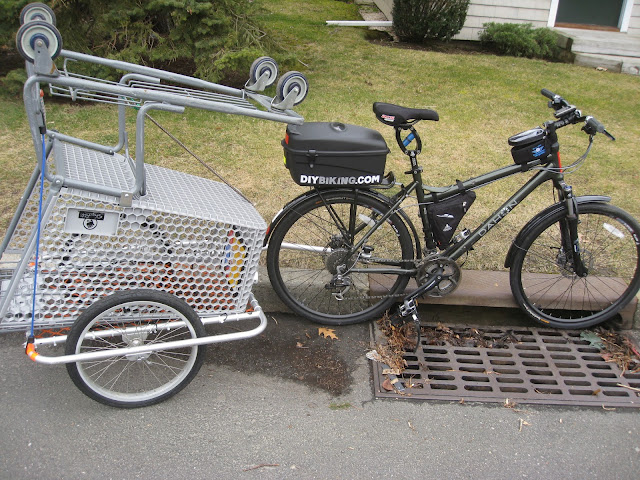 It was a slow ride, but the cart was well balanced and cars gave me plenty of room as I headed to the Shippan Shop Rite to reunite the cart with its peers. 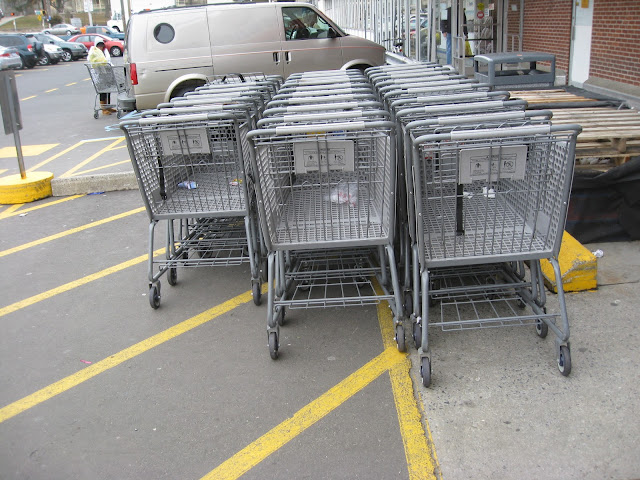 Upon leaving, I headed out into the Cove neighborhood and came across something I wasn't expecting: a green shopping cart from Fairway. 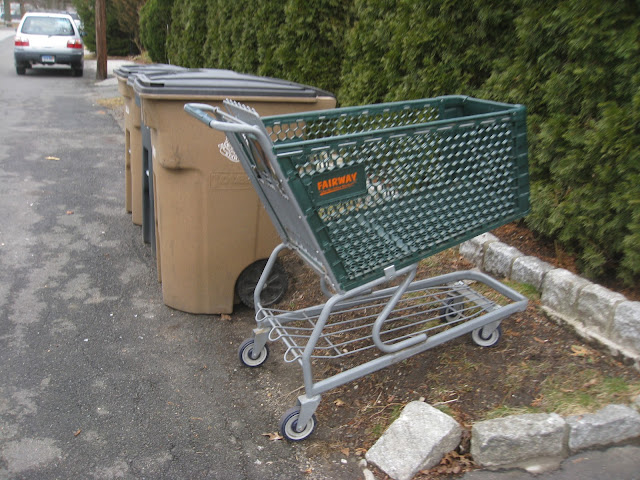 Like I said, I know it has to be annoying for grocery store owners to lose their carts when people take them home, but really, it must be a testament to how great your prices are and selection is for someone to walk a cart more than a mile and a half from your market.

I lashed the Fairway cart to the trailer. 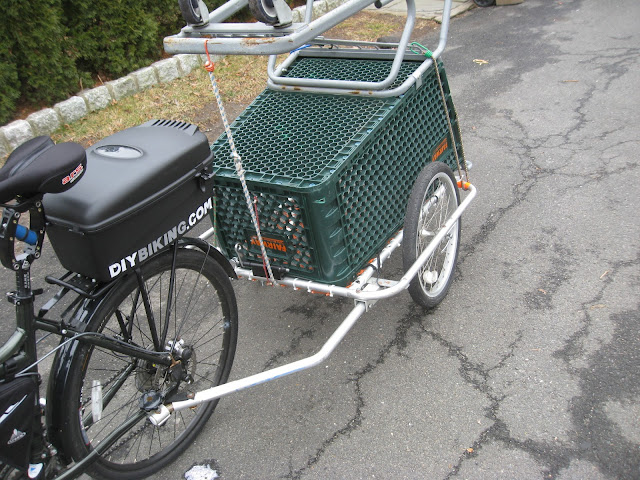 It was a slow 1.67 miles, but before long I made it to the grocery store my wife and I use the most. Being careful to follow the 'one way' signs, I arrived at my destination. 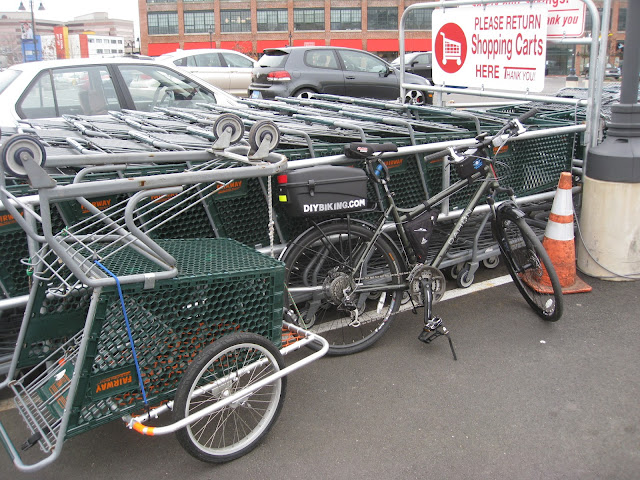 I unfastened the cart and reunited it with its peers. I also attached a note. 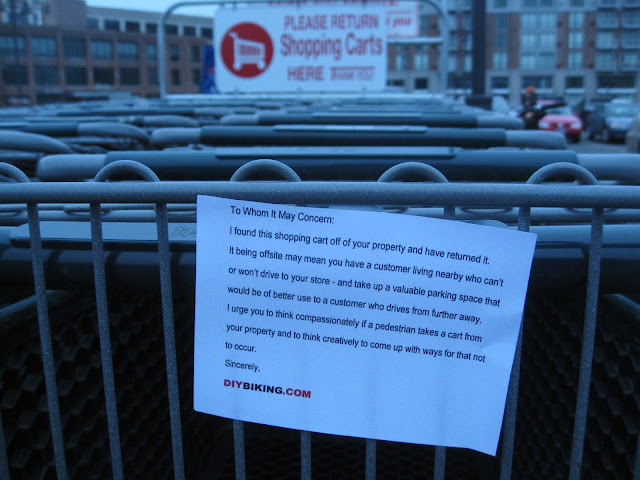 Immediately after I took that photo, two women approached and reached for the cart I had returned. Upon seeing the note, I introduced myself and said what I had just done. They admired the bike trailer and said they'd bring the note to the customer service desk. I have no idea if they did so or not, but they did take the very cart that was sitting on the side of the road in Cove minutes earlier into Fairway to do their shopping.

I biked home, and hoped that eventually the town that was cracking down on pedestrian shoppers would eventually wonder if there was a more positive route they could take to deal with the problem. In the meantime, if you see someone pushing a shopping cart past you as you're heading out for grocery shopping, try not to hold it against them. Remember: you're getting an extra shot at a parking space thanks to them.