Building a Bike Mover for the Domus Bike Drive

There's a school at 83 Lockwood Avenue in Stamford called Domus. Specializing in helping at-risk youth and their families, they have an employment program created with the Trafigura Foundation and The Workplace Inc. that teaches kids and young adults skills in repairing bikes – and the repaired bikes are given to disadvantaged kids. They're having a used bike drive this Friday. I think you see where I'm going with this. 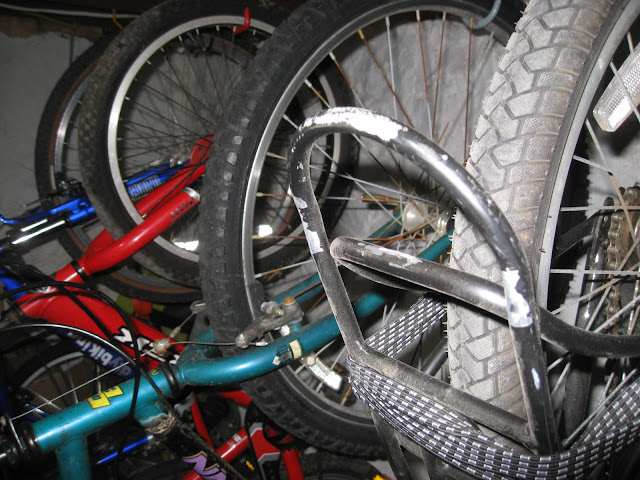 Yes, my bike storage area is rather full and the time has come for me to pare down (though the DiamondSchwinn isn't going anywhere). Paring down is normally a dreadful idea, but since I know this can help Domus and their great program I'm happy to do so (if you need to pare down as well please contact Domus or drop your used bikes off at the school this Friday between 10:30am and 3:30pm).

So I need to bring three bikes to Domus, but I wanted to do it in a way that did not involve bringing my car. Now if you want to move one bike from one place to another, it's standard procedure to ride it. But if you want to move two bikes, you either have to use a car..or do this. 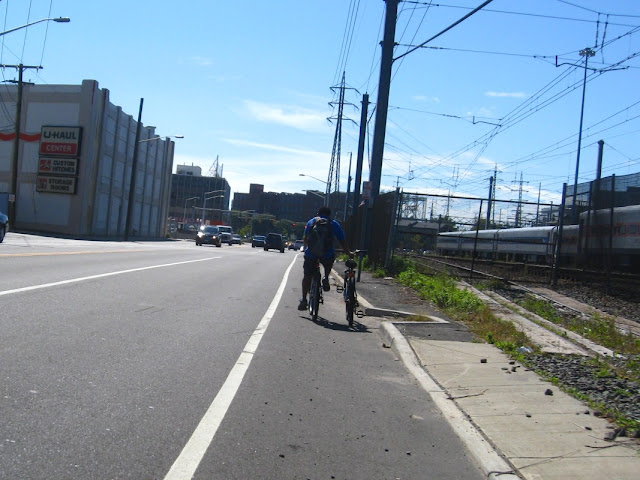 I see this happening from time to time. It's dangerous because the rider can't apply a brake or turn properly. But there has never been a solution to the two bikes/one rider problem. Until Now. 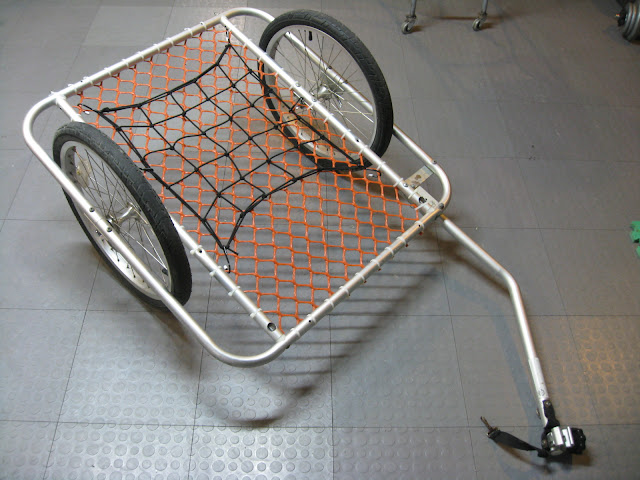 This, as you may have guessed, is the skeletal remains of a child's bike trailer that I bought at a tag sale in Greenwich in 2004 for $15. It could seat two children in E.T. quarantine tent-like comfort until I removed all of the fabric and most of the framework. I then added a section of plastic fence and tied that into place with several dozen wire ties to make a cargo trailer. I rarely use it, but when you need a trailer, you need a trailer.

I figured it only needed one simple change to turn it into a trailer that could move a bike: adding an unused Thule roof rack. 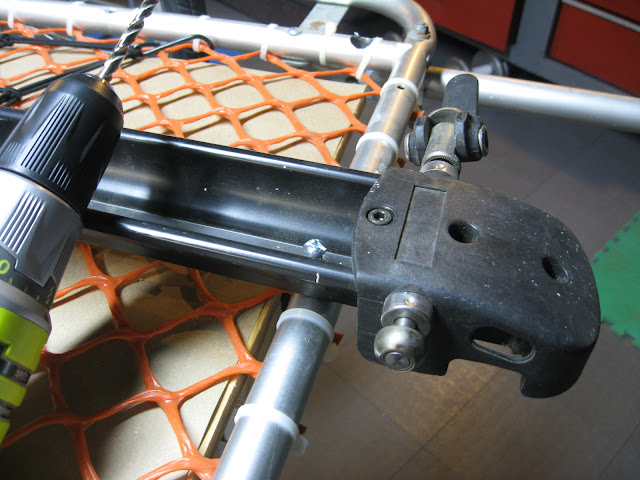 It didn't work. Since the bike was so unstable I removed the Thule and did this instead. 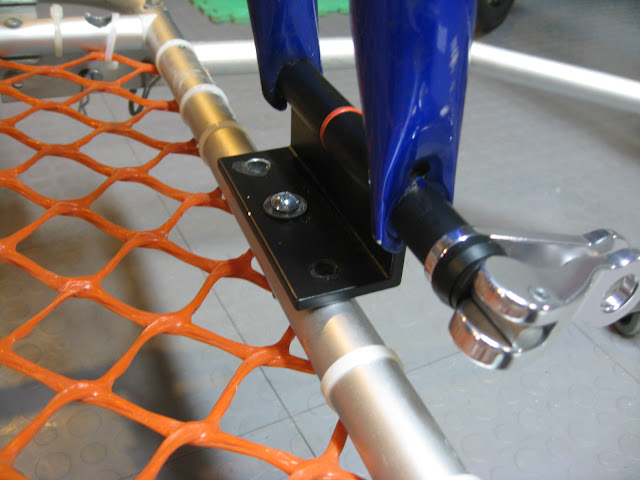 I had used my three Saris mounts for my custom Honda Element bike rack, but I had a couple of lockable mounts that are equally simple. With a steady drilling hand I just added a few holes in the bracket so I could bolt it to the tube. The bike stayed on, but since I wasn't using the Thule rack, there wasn't anything to keep the rear wheel in place.

After some rummaging, I found this. 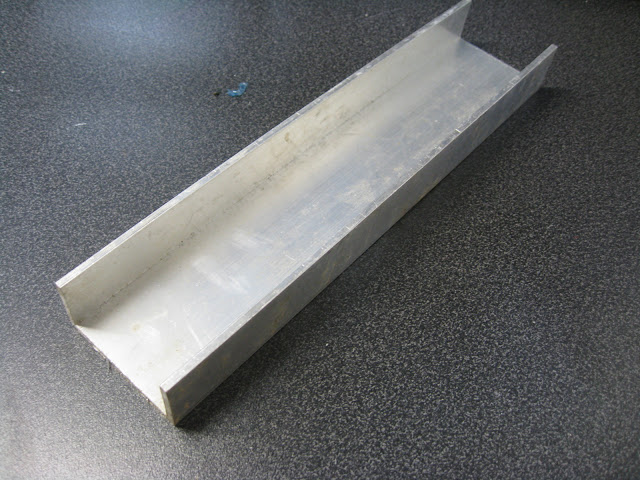 After I realized the piece of scrap aluminum was too narrow to accommodate most mountain bike tires, I took two big Vice Grips and did this: 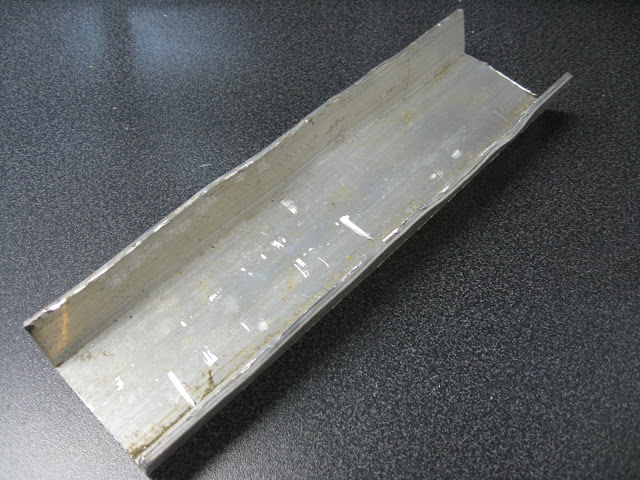 I wanted the aluminum bracket/rear wheel guide to stay snug on the trailer frame but be able to pivot depending on the wheelbase of whatever bike I'd be carrying. That meant I couldn't just bolt it on. I needed something else. I rummaged. I drank some coffee. I rummaged some more. Nothing leaped out of any of the 304 plastic drawers on the main workbench or anyplace else that would do what I wanted it to.

Then I looked up at the ceiling of my basement workshop and saw this: 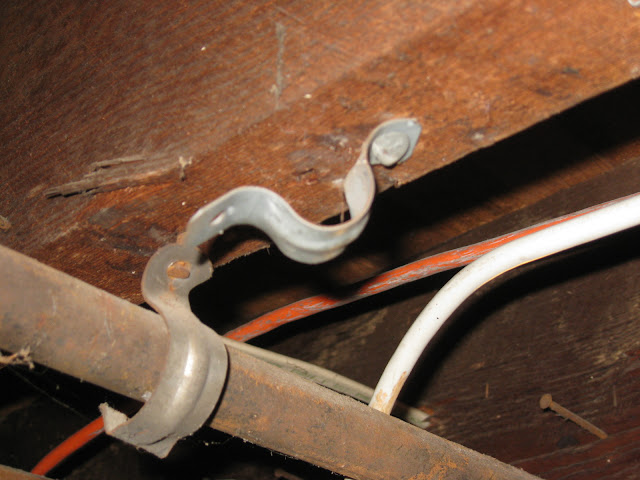 Most people with basements have pipes running this way and that all along the floor joists that are attached there by metal clips. I don't recommend harvesting metal clips that are being used for, say, plumbing, but if there are useful things on your basement workshop ceiling that are currently not doing anything useful, break out the hammer and pliers.

That's what it took to get the clip off the joist. Once that was done I drilled holes in the scrap of aluminum and used two bolts to fasten it to the back of the bike trailer. I tested it with the Hurricane Irene Aftermath Bike first and found the tire fit well in the groove, but to keep it from bouncing around I added a little Velcro strap. 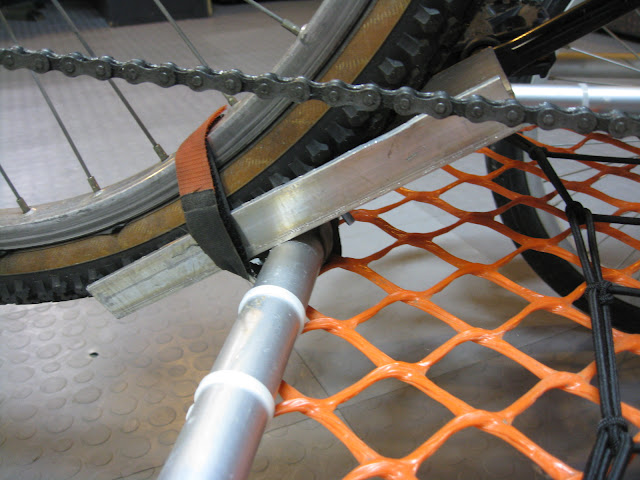 Then I got my biggest bike – the Fuji Gran Tourer, of course – and put it on the trailer to see if it would fit. I lashed the front wheel to the frame before shaking the bike and the trailer violently to make sure the bike would stay in place. I then took a step back to look at the finished product. 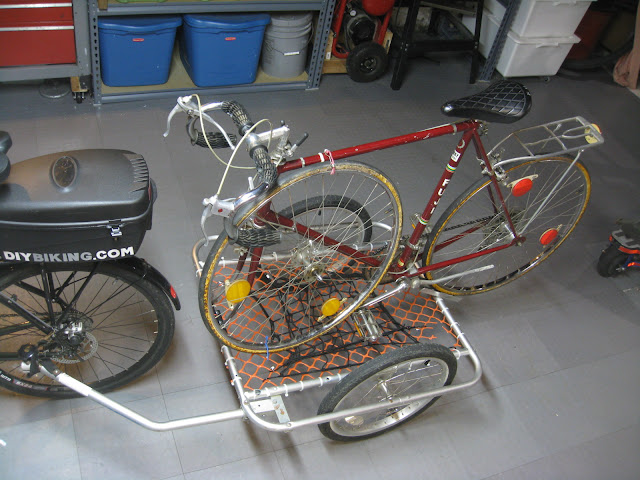 Now, unlike the Budget Supertrike (which is still confined to the shop) this trailer can be dismantled easily and stored easily. The front fork mount and the improvised rear wheel guide don't take up too much space so I can still use the trailer to move other things.

This trailer will make its debut on the streets of Stamford on Friday when I use it to donate bikes to Domus so kids can have their own Saved from the Scrapheap experience. If you have spare bikes lying around, please bring them to 83 Lockwood Avenue in Stamford on Friday. How you get them there is up to you.