On a recent trip to Mystic, I got to see the perfect pedal-powered vehicle for someone who has a lot of storage space. 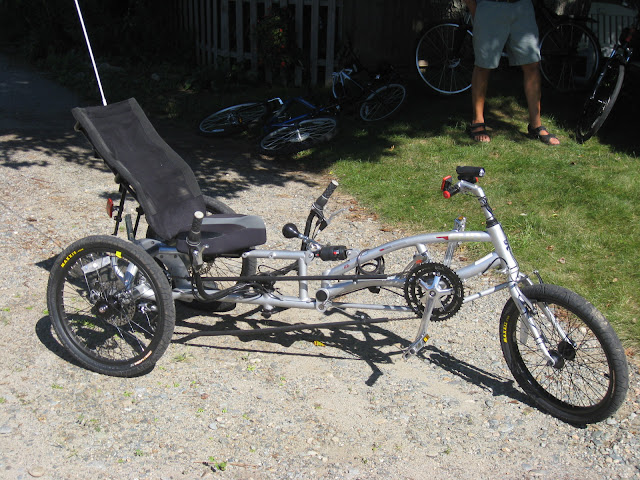 This is the Sun EZ-3 USX HD recumbent trike. It belongs to a good friend of my parents who dropped by their house one day when I was visiting. I was struck by the size of the 78” long trike and the thoughtful engineering that went into it. 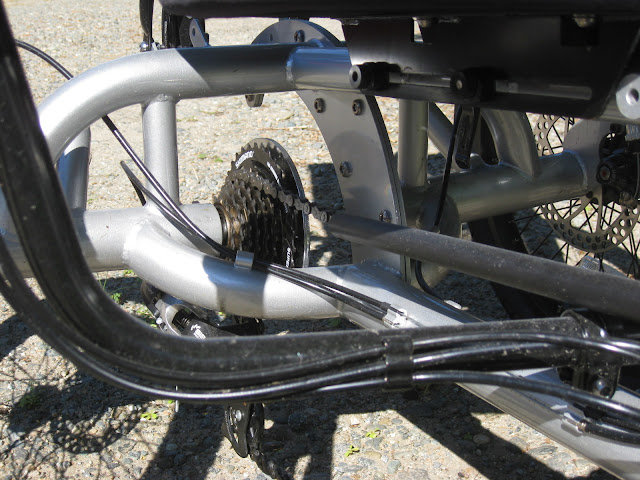 Because the front wheel is way out in front, there's an intricate yet simple linkage between the underseat handlebars and the front fork. Options for this bike include a horn, a spedometer and a one-car garage to put it in. 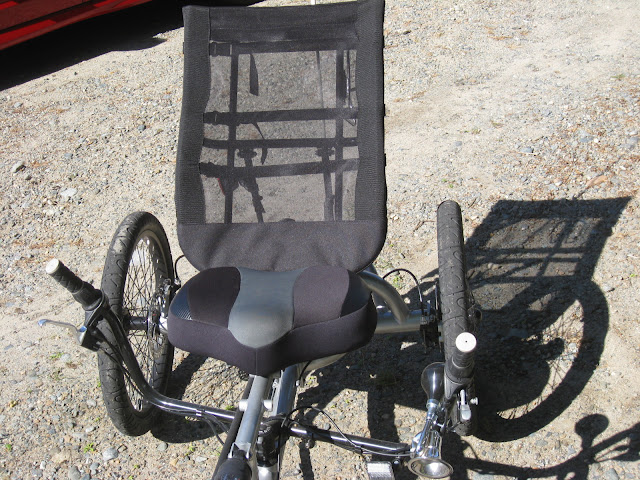 The owner, who is about my dad's age, was like a kid showing off a new toy as he pointed out the disc brakes and the suspension. But unlike most kids, he wanted to share his toy and he gave me permission to take it for a ride. Just sitting on it brought me back to the days of riding a non-powered go cart around my neighborhood growing up. Then I began pedaling the 65 pound trike and found myself moving around in striking comfort. For a frame that's built to support 400 pounds, it wasn't a surprise. 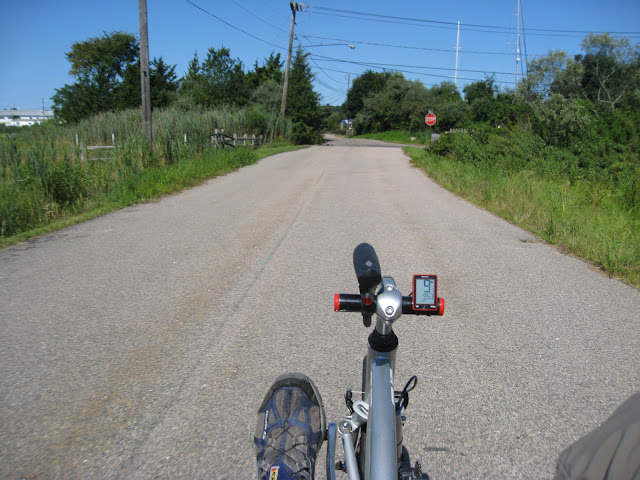 As a person familiar with the reasons one would want a recumbent – easier on the back, neck, wrists, knees...and it's fun – I found this would be a great one to own. It may be something I'd consider in the future but today the trike is too much for me: too much money and too big to fit in the back of my Honda Element or my garageless house. But I found myself liking the concept of having a trike, or at least seeing if one would manage the streets of Stamford.

I didn't give it a whole lot more thought until I stopped in a New York state bike shop weeks later and asked if they had any junked bikes to give away. The owner looked at me funny when I told him I wanted the only thing he was willing to give away...which was this. 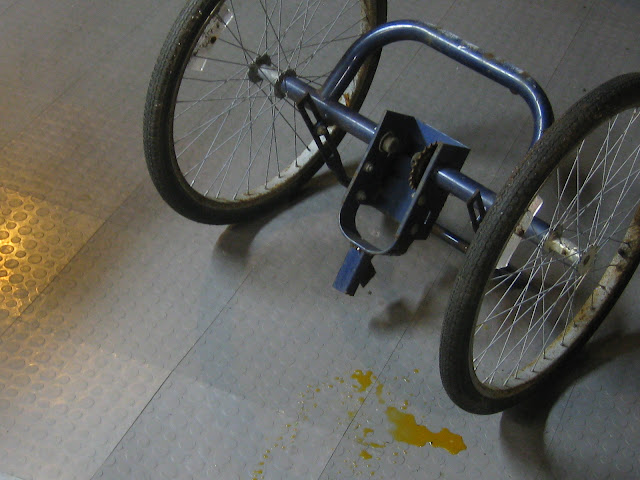 Yes, this is 1/3 of an adult trike, and it appears exactly as it was given to me, complete with rusty water flowing out of every opening. The bike shop owner said the complete trike was abandoned at his back entrance, and he later sawed it up so he could take it to the dump. He mumbled something along the lines of 'knock yourself out' when I said I wanted to take it.

The thing he didn't know is that at home I've had a 1997 S&B Malibu recumbent frame, fork and seat that I had bought on eBay years ago. I wondered if I could combine the S&B frame with the rusty rear trike axle and build my own budget trike. As they say on Top Gear: 'How Hard Can It Be?'

The first thing I did was remove the bracket that had once connected the whole bike frame to the rear axle. I was encouraged at the fact the bracket was about the same width as the rear fork of the S&B frame, so I was pretty sure I could attach the two together without having to weld anything. 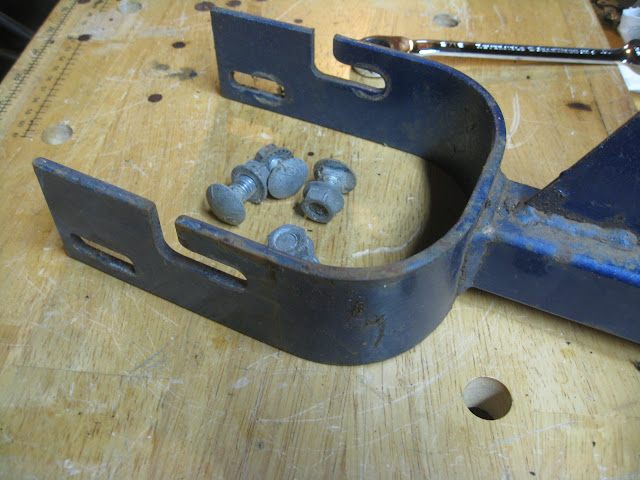 Next, I rummaged around trying to find the remaining bits of the S&B – and many of the parts I haven't touched since I dismantled the bike five years ago: I found the front 16” wheel, the seat, the seat stays and the idler gear. When I found the chain, I hung it casually on the trike axle and noticed that it wouldn't...what's the word...fit. 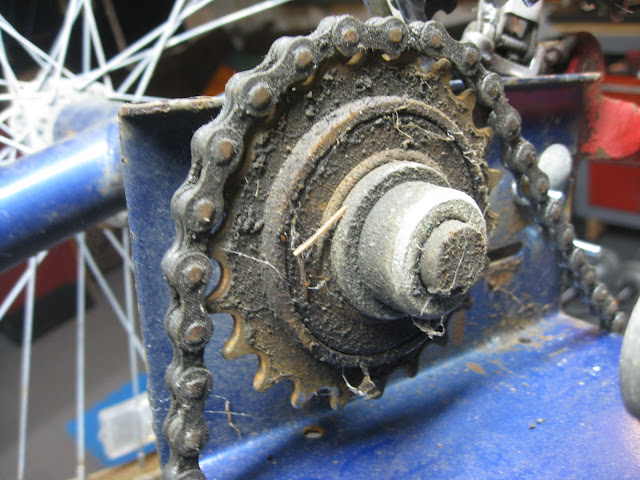 I searched for chainrings I could use to replace the sprocket, but I had no luck: once I removed it I could tell it was some proprietary sprocket that I didn't have in my shop. But what I did have was a gear from a disassembled cassette. I decided to cut it so I could lay it over the sprocket and carefully weld it in place...because I wasn't sure what else to do. 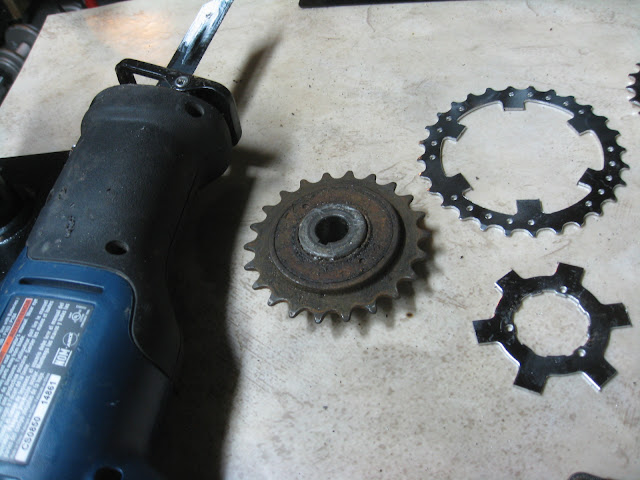 I dry-fitted the S&B frame onto the axle to make sure everything was going to line up properly and draped the chain through. It worked suspiciously well and the welds looked like they'd hold. 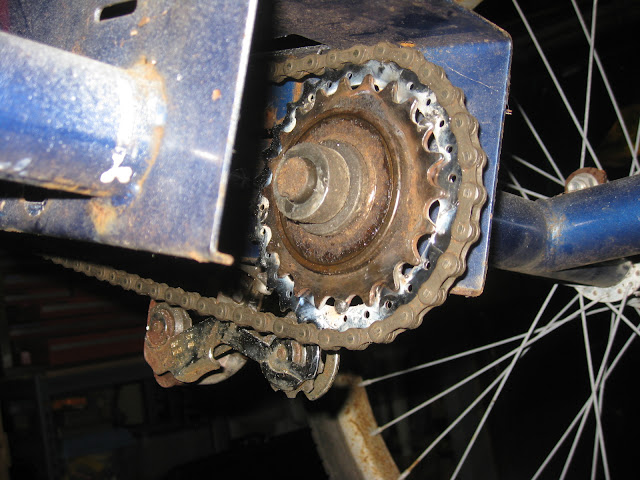 Next, I had to attach the S&B frame to the trike axle. Because the S&B frame was so overbuilt, I thought I could just drill through the holes of the frame into the trike assembly, and bolt everything together. Wasn't the easiest thing to do because the wheels were in the way, but luckily I had the right tool for the job: a drill bit extender. 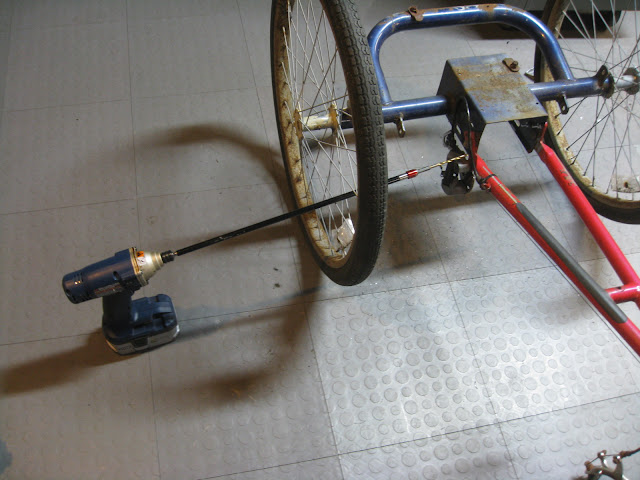 I lined everything up carefully by eye and made two holes on either side. Once I rustled up some bolts I attached it all together and it worked. 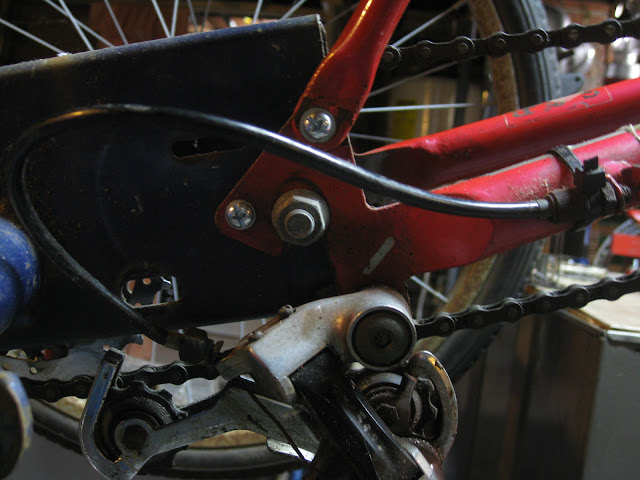 When I sat on it, it didn't give me quite the same level of confidence as the Sun EZ-3 USX HD (the 'HD' stands for 'heavy duty') so I created additional attachment points with the S&B's seat stays to make it sturdier. I really didn't want to weld the S&B frame just in case I wanted to sell it down the line, and once I finished making additional attachment points, it was clear I probably wouldn't have to weld anything structural.

But I did decide to integrate more welding into this project. To my satisfaction, I could pedal from my welding room to my diner booth, but I only had one brake for the front wheel. The trike axle I had been given for free had no coaster brake, no disc brakes, no caliper brakes, and no mounting points for brakes of any kind.

I did have, however, a scrapped suspension fork from a originless department store bike. I took a quick measurement and cut part of one side off, then dug in one of my plastic bins looking for proper caliper brakes. 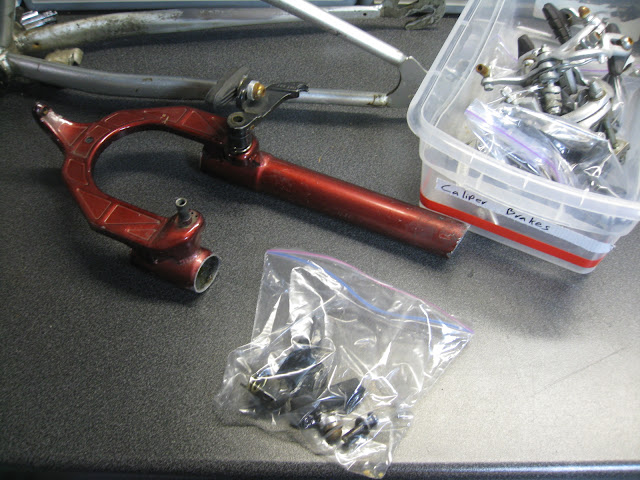 I've found that if I have a vision that involves putting metal objects together in unnatural ways, it helps to have magnets around. I had no shortage of those in the welding room and I used one of my Northern Industrial magnetic clamps (and a few pieces of scrap wood) to hold the broken fork where I thought it should go. 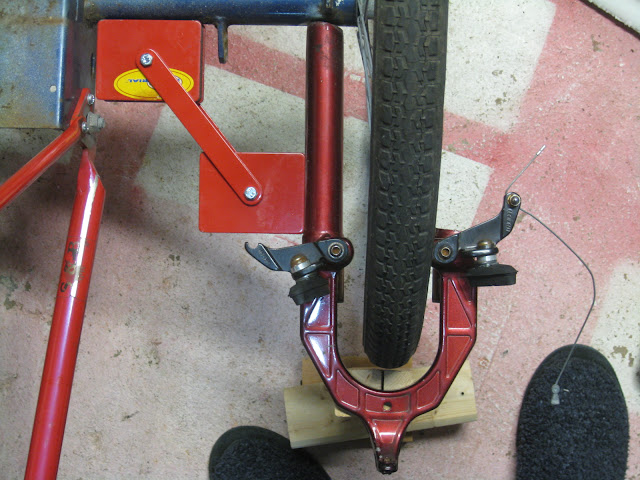 The first time I pulled the trigger, the fork moved slightly out of place and I had to break the weld to do it again. The department store fork needed its caliper brakes to be exactly where I wanted them if I had any hope of stopping my budget supertrike. The second time I pulled the trigger, it stayed where I wanted it to, so I moved the nozzle carefully around so I could put as many intentionally ugly welds as possible connecting the purple fork to the axle. It seemed sturdy, but I decided to weld the removed piece of fork to the assembly just to make it stronger. 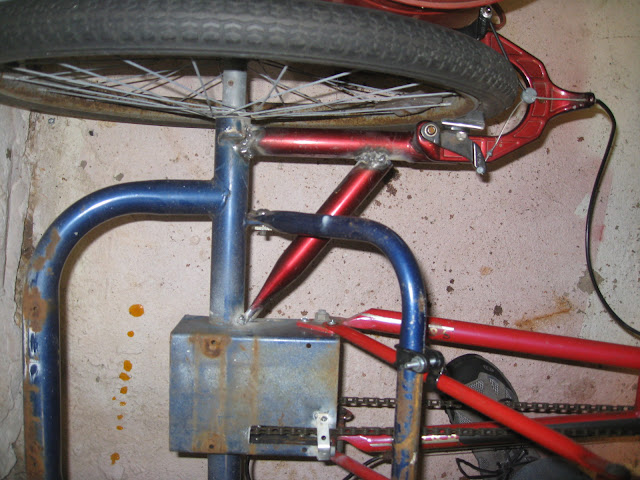 Thanks to all the practice I had doing up the brake cables on my homemade mountain bike, the rest of the brake build went perfectly. Before long I had...THIS! 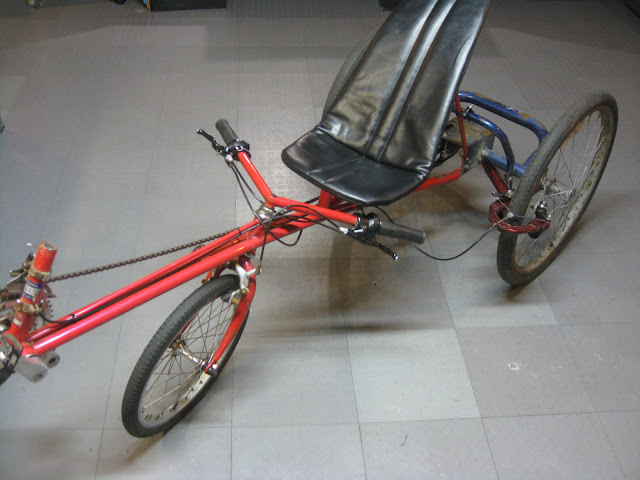 I will admit this does not have the gravitas of a SUN EZ-3 USX HD and with one speed it doesn't have the gear range, but it is a trike with two good brakes (I can come to a stop just before ramming into the clothes dryer!) and a comfortable seat. I had a budget supertrike that was ready to hit the streets.

However, the streets, as they relate to the birthplace of my budget supertrike, are up a narrow set of basement stairs, through a narrow door, down a narrow hall and through another narrow door. What I had built was several inches too wide and tall to make it out of the basement. And I was feeling so clever at having solved the sprocket problem and the brake problem.

So the lesson here is: if you have the right tools you really can build a budget supertrike for less than $200, but you should build it outdoors or in a garage. Or just buy a Sun EX-3 USX HD to save yourself valuable assembly, disasembly and reassembly time.