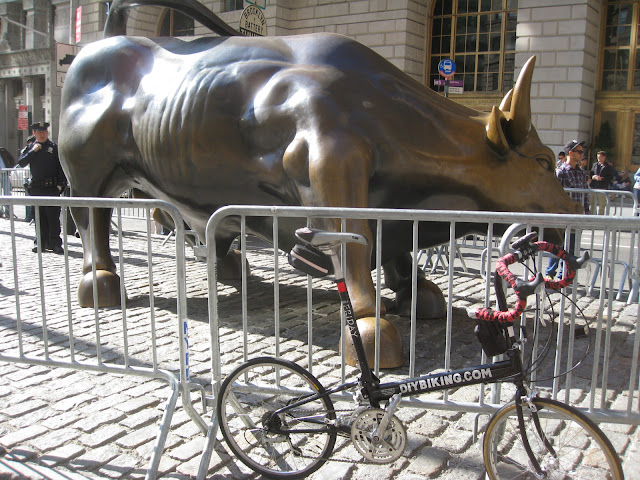 A recent Sunday brought me to Manhattan. It was one of those rare days when the weather never quite got the message that the seasons were changing. My wife wanted to spend some time in the East Village and I wanted to ride, so we set up the day so we could both do those things.

I decided to give the Dahon Matrix a rest and took the Bike Friday for the trip. True, I could have brought the recumbent or even the mountain bike because there are few bike restrictions on Metro North on the weekends, but after its strong performance in Boston I thought I could easily survive another major metropolitan area...and I could fold it up in a little bag and carry it into a restaurant with me if we ended up staying for dinner.

But lunch came first, and in the East Village you can take your pick of great places. My wife chose Hummus Place, which I recommend primarily for two reasons: the food was great and it had a metal railing so I could sit near the bike. 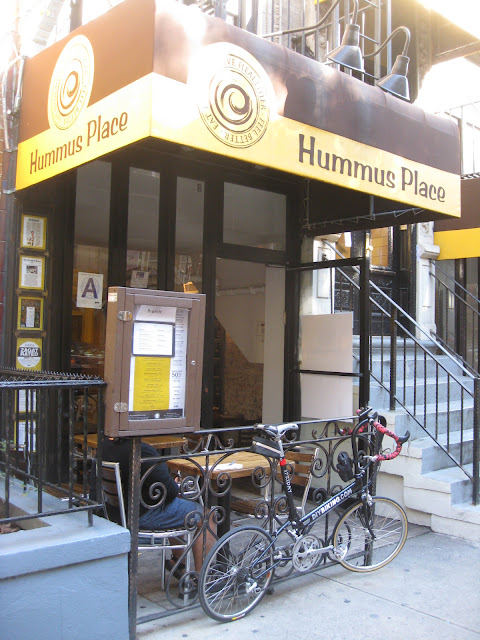 When I began the ride, I headed south into Chinatown and worked my way to Wall Street, where as you can see from the photo, the police were protecting the bull. Since I saw no protesters there I easily made my way to the start of the Hudson River Greenway, which begins at Battery Park. 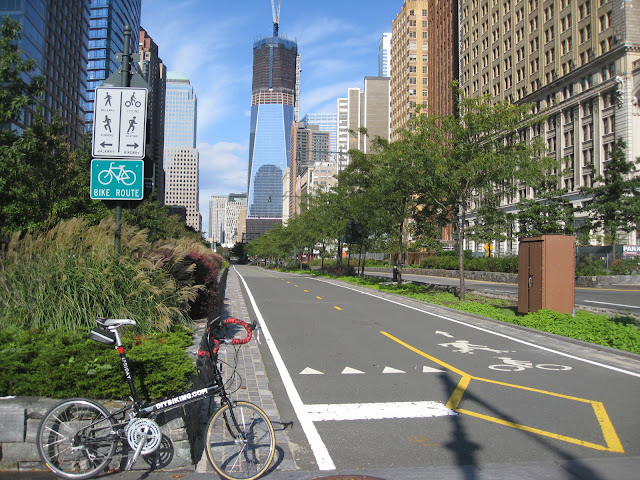 I had last been on this path in May when I used it to make my way to 42nd Street after the Five Boro Bike Tour, but today I felt like crossing almost the entire length of Manhattan and shoot for the George Washington Bridge near 178th.

When you ride on this trail, you owe it to yourself to stop and see some sights. Not far up you can see the Statue of Liberty off in the distance. 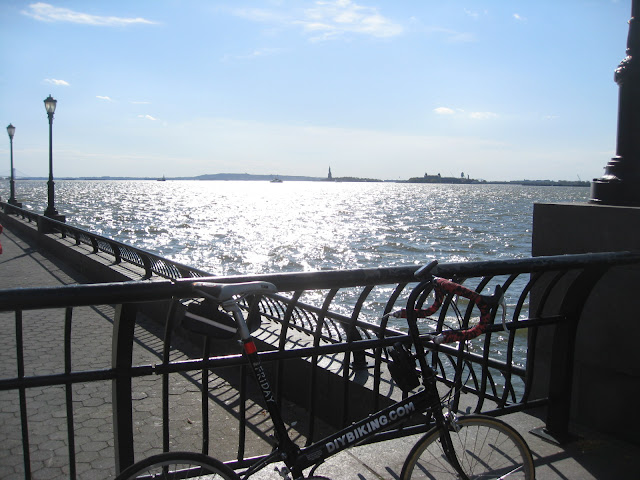 That day, there happened to be the first annual electric car festival at Pier 54. I decided to drop in to check it out, but I didn't stay long enough to discover the link between face painting and electric transport. 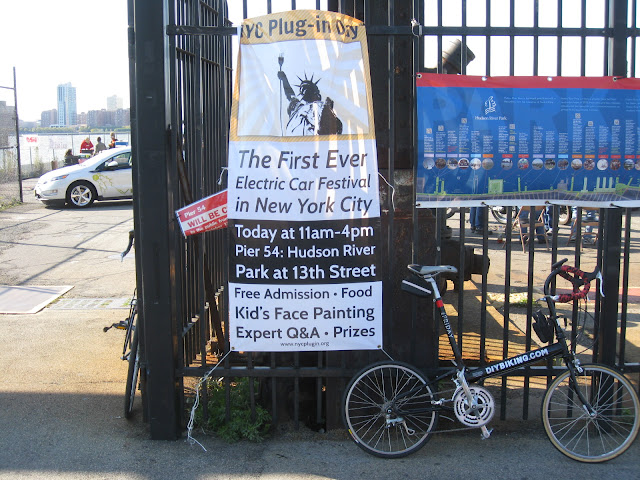 I did, however, get to actually touch a Tesla – you know, those electric cars powered by over 6,000 laptop batteries – and I saw something that was incredibly inspiring. 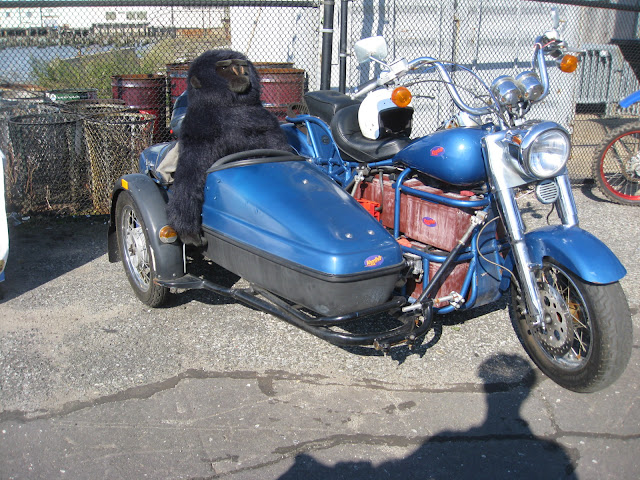 I didn't stay long enough to discover the link between gorillas and homemade electric motorcycles, but feeling inspired, I continued my ride.

Around 46th street, I found my favorite floating landmark, The U.S. Intrepid Museum (nearby is a Bike & Roll location so those of you who don't or can't bring your bikes to Manhattan can experience this path on your own). I practically had to step over to the East River to fit this much of the aircraft carrier in the shot. 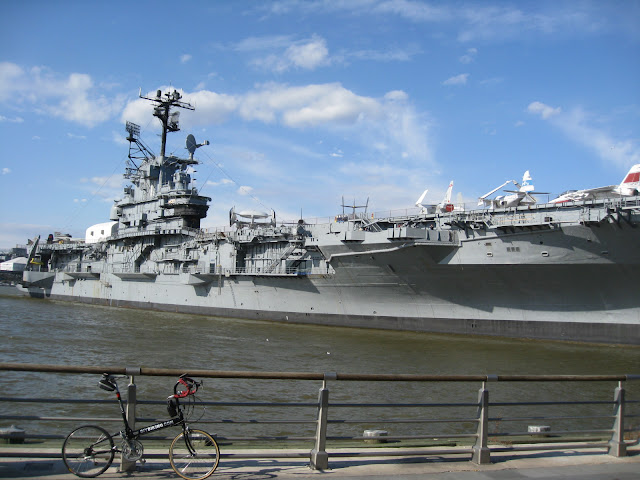 On a future trip, I will visit this museum. Hopefully, before February 5, 2012, because that's when the special exhibit 'EJECT! The History and Workings of the Modern Ejection Seat' ends. Whoever named that exhibit did a great job – it makes me want to learn about ejection seats right now instead of finish writing this post.

I pressed on, and soon made it to the unattractive part of the trail. It's not a complaint. Since there are few, if any, rollerbladers on this section I could put the Bike Friday in the big chainring and go fast. 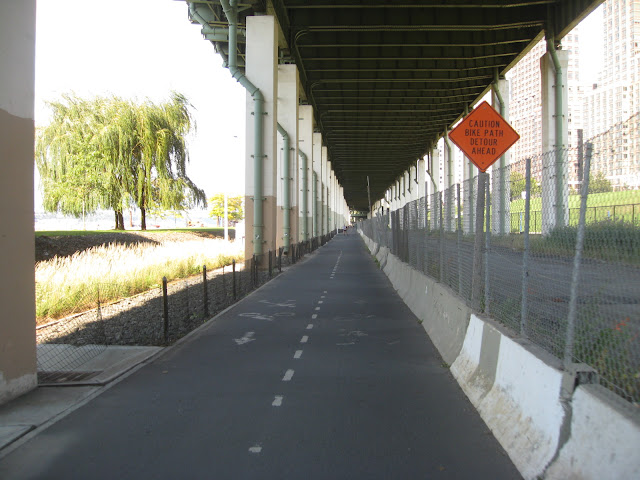 Soon, though, the path became attractive again, which brought about a return of traffic and safer speeds. 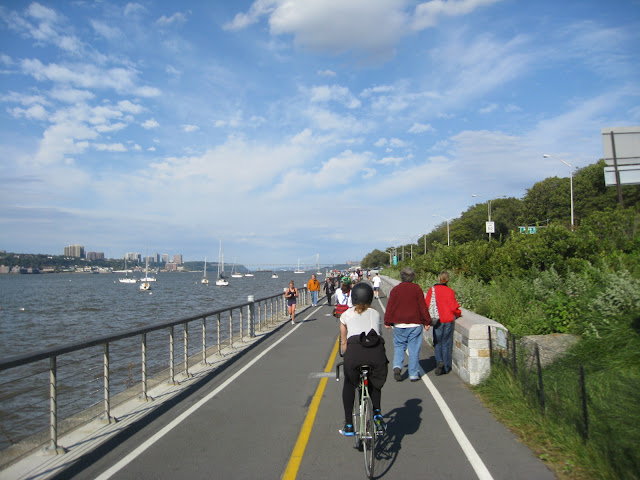 Eventually, I came across a cyclist I respected. It's not that I didn't respect the others I had seen so far that day, but this gentleman appeared to be getting his son started on cycling early and was taking him to (or from) a lesson. 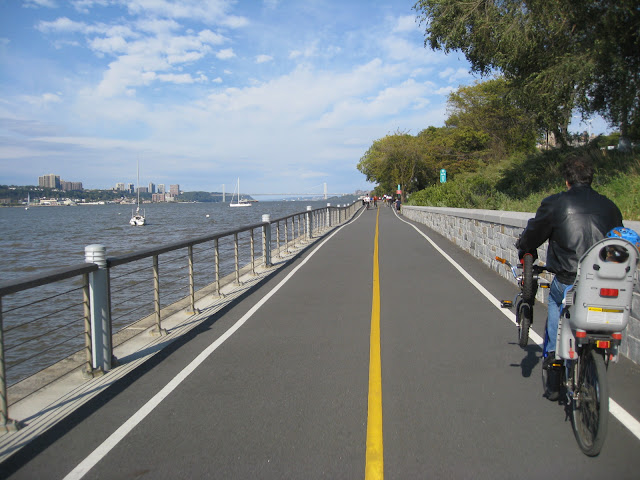 Later I came across a woman who was writing something and gazing wistfully toward New Jersey. Was she writing a letter for a lost love? Writing notes for a cycling blog of her own? It was only for me to guess as I snapped her picture while speeding by. 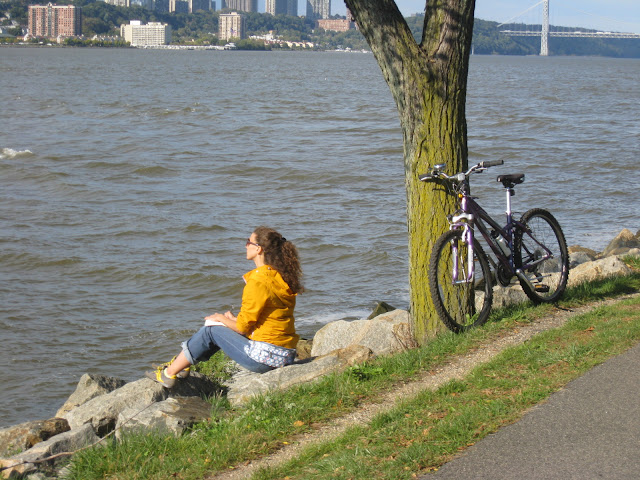 I have no idea who she was, but she did a pretty good job symbolizing the pleasantness of the trail: it puts Manhattan at your back and the glorious beauty of the Garden State in your sight. It truly is a remarkable path. 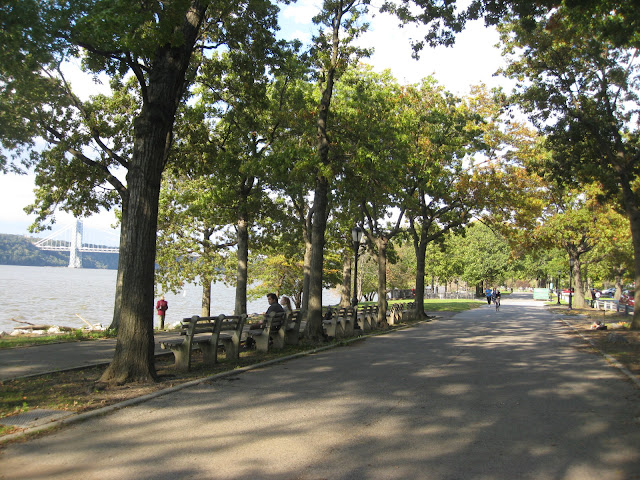 About 11 miles after I started riding on the path, I made it to the George Washington Bridge, a colossal structure that has given me more traffic nightmares than I care to remember. Driving on the bridge can be terribly stressful. Beneath it, though... 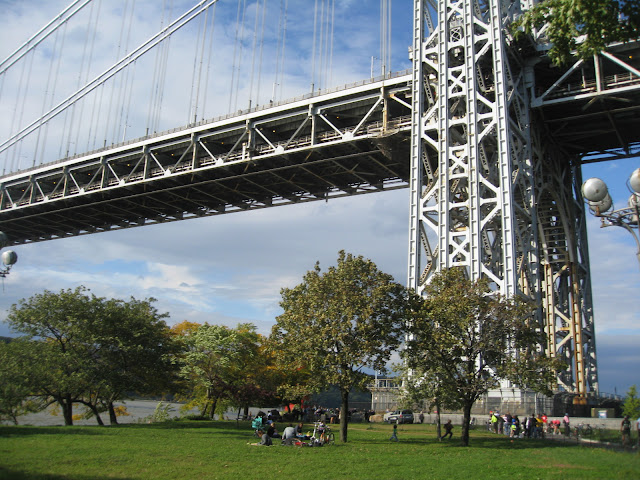 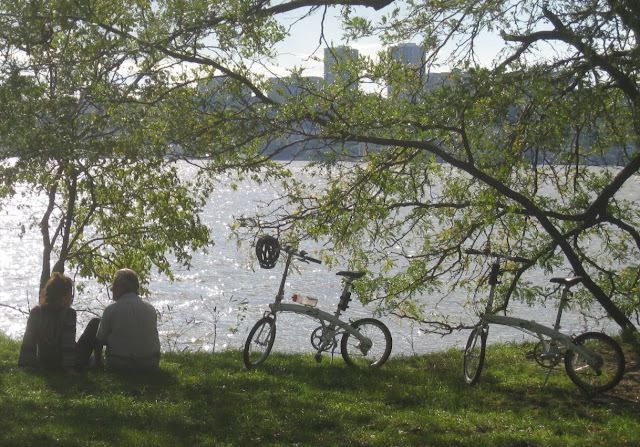 Unfortunately, I couldn't stay long, and after a few swigs of a water bottle I headed back down the path and to 42nd Street so I could meet my wife in Grand Central Terminal. On the way to the city that morning, we had to stand up in the train because it was crowded. On the way back, we got seats...and the Bike Friday got to hang on one of the new Metro North bike racks (by the way, if you've used the racks don't forget to provide feedback to the MTA; here's a link to the survey). 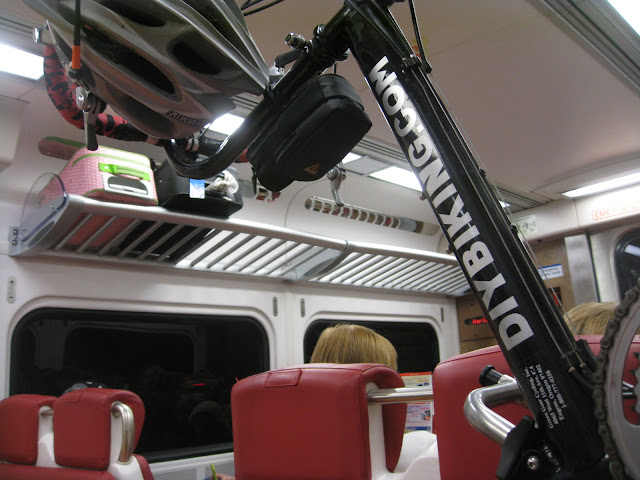