So I successfully shed a good deal of weight from the recumbent in hopes it would be a little more...for lack of a better term, competitive in the upcoming Five Boro Bike Tour. I can feel the eye-rolls and see the smirks of every whippet-built man and woman riding things that are worth more than the Blue Book value of my Honda Element, but I don't care. It's fun to ride, and it is the bike that got me re-interested in cycling. It being a Turner Recumbent, I like knowing the first and the last name of the guy who hand made it when I was still sleeping under a Dukes of Hazzard bedspread. Not only that, but the kids love it. Many times I've ridden this 30-year-old wonder in places like Darien and elsewhere to a chorus of “Mom! Look at that!” and “Neat-O!” Pretty moms like it too.

However, on my first ride after the weight-shedding initiative: 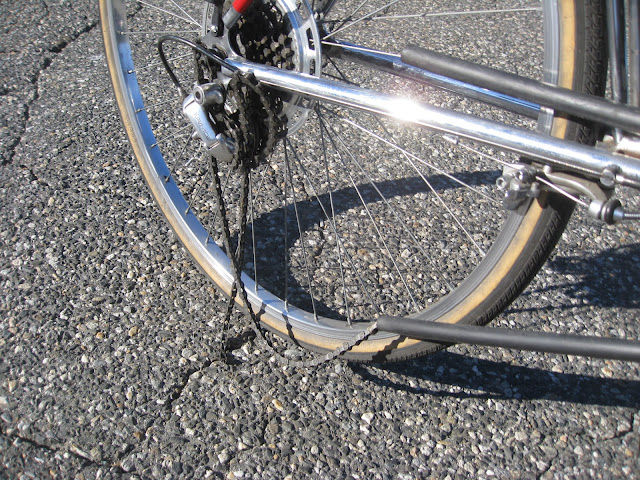 In New Canaan, starting from a stop in front of Radio Shack I heard...POW! And the chain slid through the tube like an onion slithering out of an onion ring. It bunched up against the rear derailleur in maybe 1/8th of a second.

The chain had broken. Again. And I did not learn my lesson from the last time it happened as I once again did not have a chain tool with me. A visit to a nearby sports shop yielded nothing as it was closed on Sundays. I phoned a friend in town who I knew would have the crucial tool and got his voicemail.

But I wasn't far from the Metro North station, and that meant that instead of having to push the bike ten miles home I only needed to push it a little less than two. The bike just doesn't get used like the old days. I have a Dahon Matrix, which is the go-to short-range fighter/workhorse. A Bike Friday New World Tourist for long-range travel and speed. A homemade mountain bike for rough trails and bragging rights. An A-bike for...for...laughs (I guess), the Budget Supertrike for more laughs, and the DiamondSchwinn just to tie the workshop together.

I wondered if I wasn't using the recumbent as much because I felt like I had reached my limit with its limits: Six speeds isn't that many, and with the Bike Friday I feel that I can really open up the throttle and move faster. Perhaps it was time to see if I could bring the infamous dinner-plate sized 60-tooth chainring into the picture – after getting a new chain, of course. With a greater gear range I might use that bike more and it wouldn't be as prone to random breakage.

At least that's what I'm hoping. The Five Boro Bike Tour is less than two months away, and if the recumbent will live to see it's eighth one, maybe it should do it with twice as many speeds. Even if the bike ends up dying in a blaze of glory I'll know that I had given it all I had.

But giving it all I had would be a risky operation. As you can see, the bike just wasn't made to have multiple speeds. Not only is there no front derailleur, but there's no place to mount one. 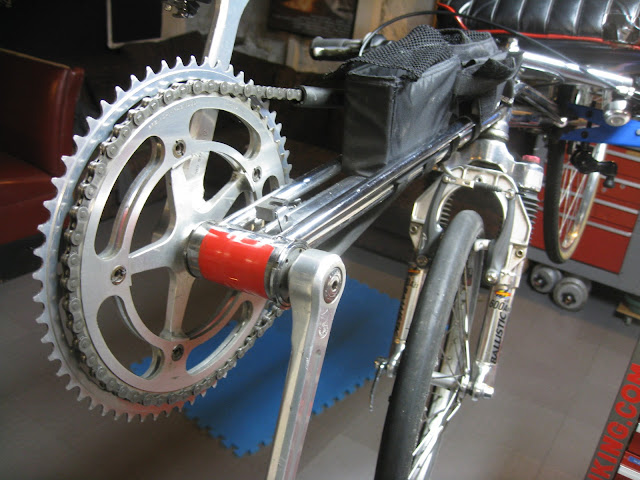 I checked the Budget Supertrike to see how that front derailleur is mounted, and could plainly see that a little metal tube extending up from the bottom bracket was the way that bike rolled. 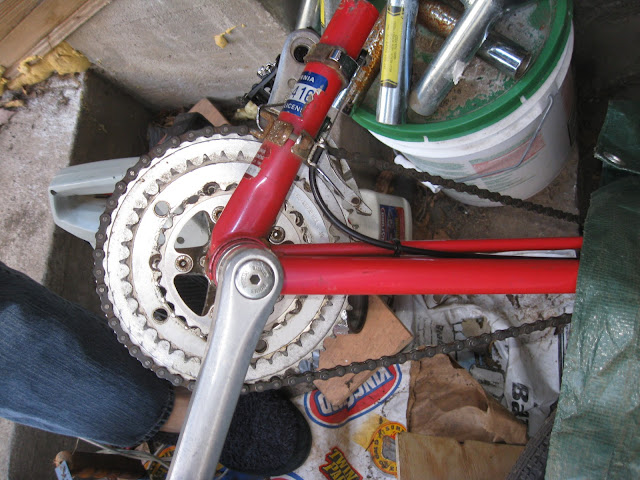 I had serious reservations about welding something onto the recumbent's bottom bracket, but I was convinced the theory was sound. So I rummaged through a bin of Saved from the Scrapheap body parts and found the top tube of a child's bike that I thought would do the job. Not only did a front derailleur I had fit on it, but the overall finish matched that of the recumbent. 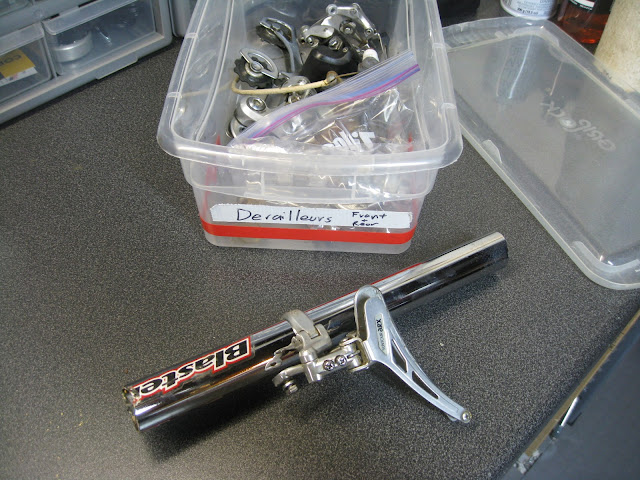 I moved the bike into the operating theater, using one of my recovered trainers as a workstand. 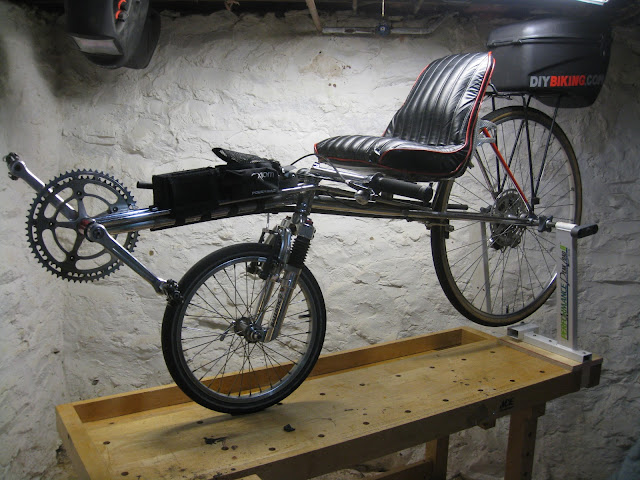 Even though the angle on the budget supertrike's frame put the metal tube right on the bottom bracket, I found the implications of welding on that particular part of the recumbent's anatomy to be too daunting. If I were to burn a hole in that or otherwise damage it, it would probably be game over.

I decided to use an angle grinder to make the tube fit as snugly against the part of the frame that connected to the bottom bracket. When I did that, I used one of my magnets to hold the little tube in place so I could see where the front derailleur might go. It looked as though it would work, I thought. 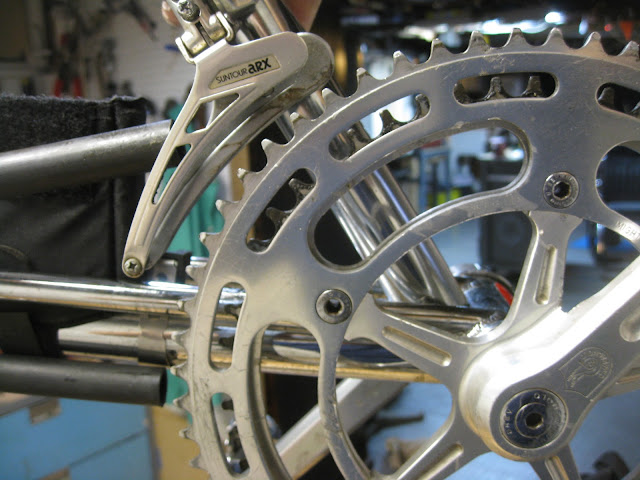 Everything was lined up. I prepped both parts with sandpaper to give the welds something to cling to. I checked the position of the pieces about 4,200 times. Finally, there was nothing left to do but break out the surgical equipment...and the surgical mask. 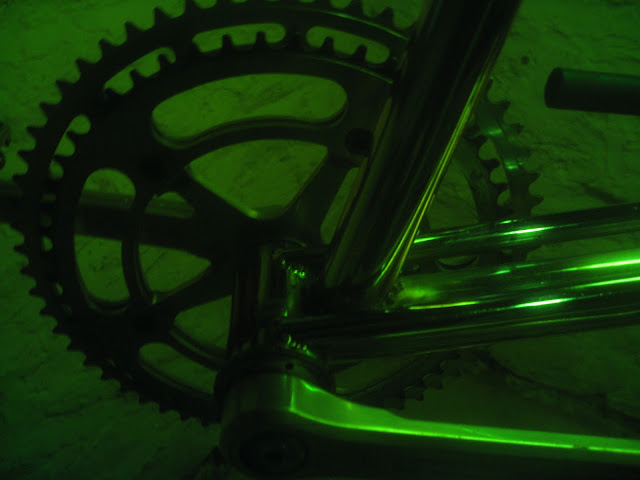 Many years from now, if Storage Wars is still on the air, somebody is going to find this frame in a long-abandoned storage locker and the expert they bring it to to determine its worth will say: “This is a frame from the talented recumbent bike builder Milt Turner. It's one of his first Hypercycles made in the late seventies or early eighties.”

“What's it worth?” Barry Weiss (yeah, he'll still be alive) would ask.

“Well, it seems like some nitwit welded part of a kid's bike frame to the front. He obviously wasn't a very skilled welder or the welds would look really pretty, so this frame, which would otherwise be worth some money (cue the fake suspenseful drumroll) is worth nothing.” 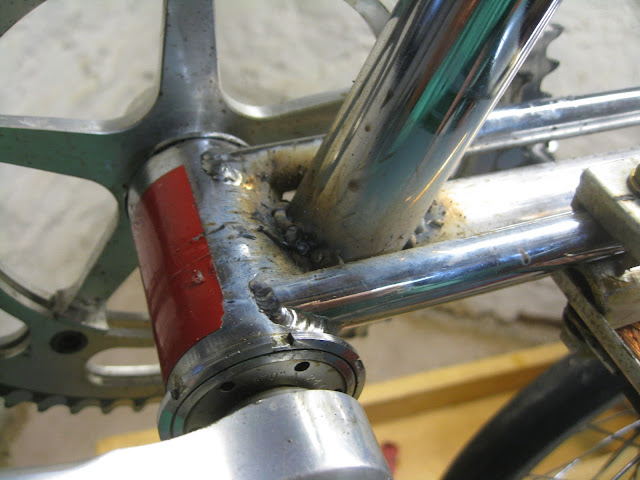 Okay, Storage Wars producers of the future: the welds aren't pretty. I tried my hardest to make them so, but this was as far as I got. Because the parts of the frame are so close together it was very hard to see what I was doing because of the angles I was forced to use (until humans evolve so our eyes are on stalks, it'll be a recurring problem).

However, when I cleaned it up with a wire brush, it didn't look half bad. The untrained eye would think the bike was intentionally built that way. And the welds were strong, which was the more important thing.

Then I hit a snag, but I hope it's a small one: it seems the front derailleur I located is missing a crucial screw that would allow a shifting cable to stay in place. Do you see the hex bolt just near the 'a' in 'Blaster'? That's what needs to be replaced. 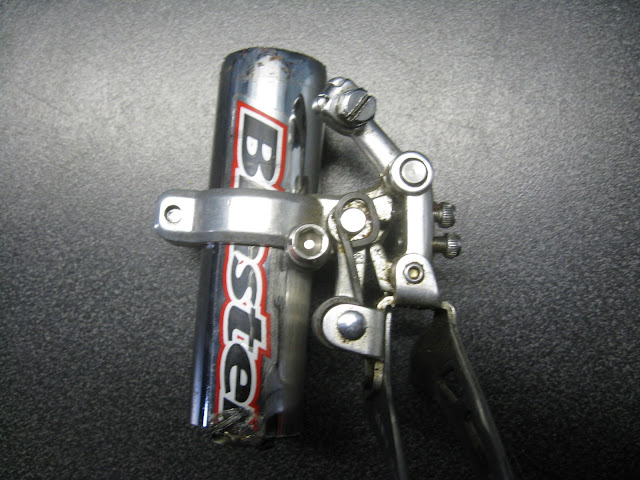 I'm going to head to some of my favorite bike stores today to see if I can replace the screw. Just in case they can't and I have to price out a whole new derailleur, I'm bringing the little piece of leftover metal that has the word 'Blaster' on it with me to make sure whatever I get will fit. Even after I do all that – and get a shifter and install a new, stronger chain – there is still no guarantee this will work.