Saved from the Scrapheap: Diamondback Sorrento

When my dad upgraded his bike he gave me this: his 1991 Diamondback Sorrento. 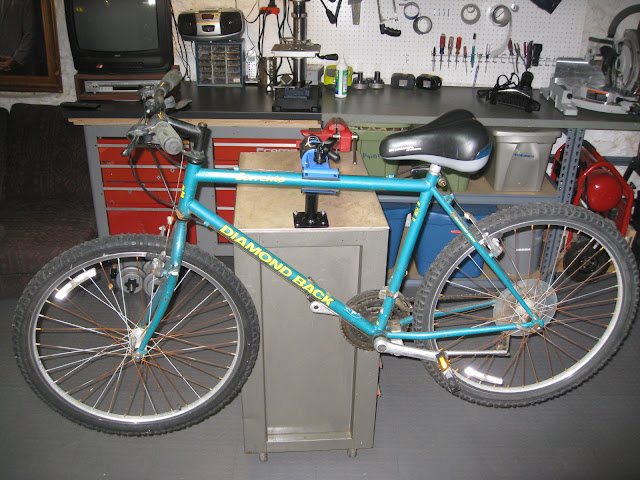 Even though this is the youngest bike that has yet been profiled in this series, it does look like it is the oldest. Since the bike spent most of its time in the Mystic, Connecticut area, the salty air did a real number on it.

This is what served as my office bike for over a year until I replaced it with a better, more attractive one. As I wrote back then, nobody in my building enjoyed getting in the elevator with me when I would take it out for a ride. But it was well tuned and had good tires, and the only real changes I made was the big seat and the gel handlegrips.

Once I bought the new office bike, this headed to bicycle purgatory in my basement. When I brought it out I could see how worn the bike really was. 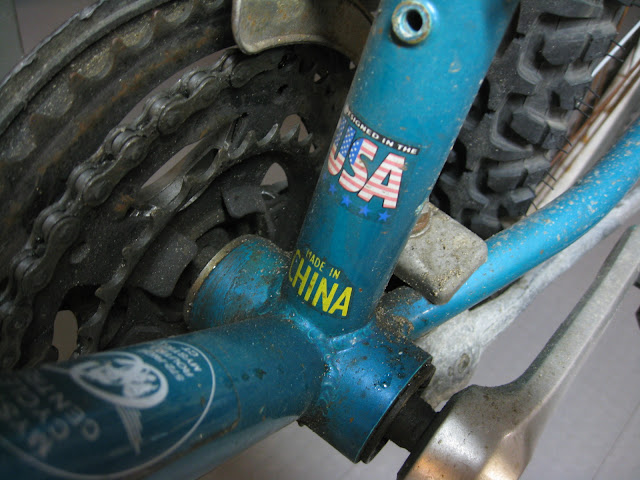 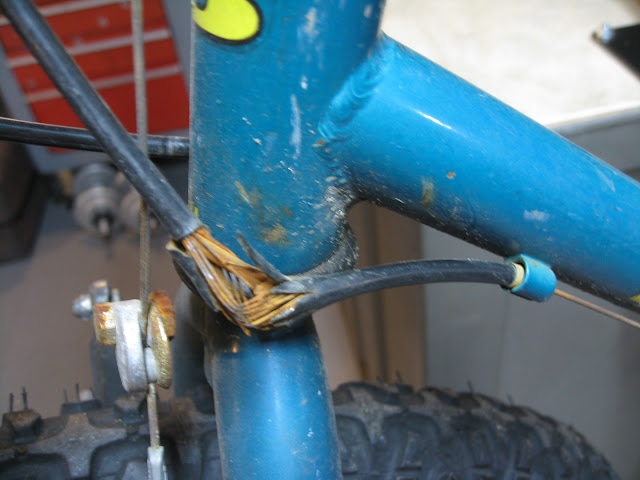 As you can see from the picture above, the brake and shifter cables were in truly bad shape. If I wanted to ride this again, I'd have to replace most of them.

But I didn't want to fix the bike for its own sake. I needed a challenge and the solid steel frame of the Sorrento gave me an idea: Why not cut the bike in half and weld it back together?

I bought a Lincoln Electric Mig welder expecting to build up skill and eventually create my own bike frames. The problem, as you've seen from the workbench I made, is my welds are neither pretty nor consistent. I have had some success as far as strength goes (not only with the workbench but I welded a bedframe that hasn't collapsed after two years) but I haven't done bike frames. Unable to find anyone to teach me how to do it properly, I decided the only way to get to my goal was to practice.

First, I used a pipe cutter to cut the top tube, and where the handle couldn't reach I finished the job with a Ryobi 18V reciprocating saw, which I consider to be the patriarch of the battery powered ONE+ family of tools. 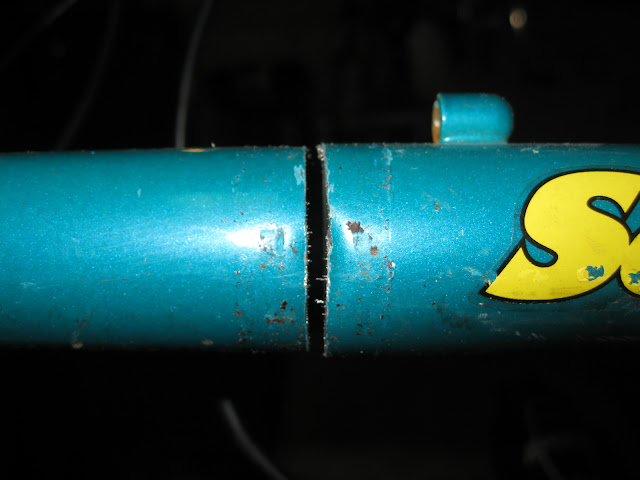 When I cut it I thought of a way to make this project a little more interesting: in my scrap metal bin I had various frame pieces from bikes I've dismantled over the years. Why not cut off the entire top tube and replace it with another? Doing that, I reasoned, would be twice the practice. I also didn't think I could possibly make the bike any uglier.

I did wimp out on cutting the bike in half all at once so one half would fall to the floor. I had brake and shifter cables to think about, so I decided to do it one tube at a time. That still, as I found out later, put a lot of strain on the cables. 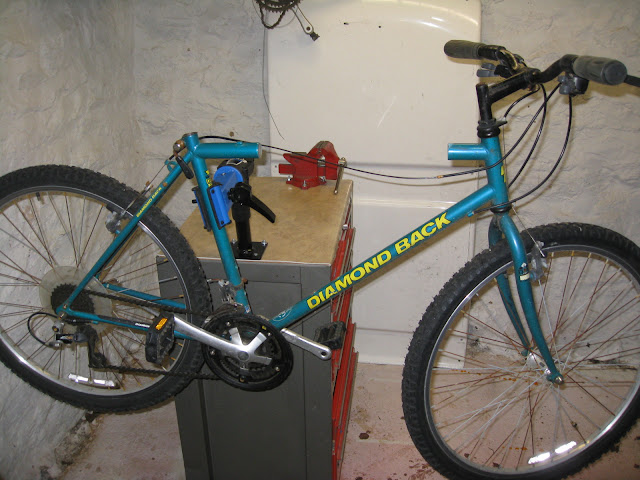 Once I removed the top tube I picked a Schwinn 'Thrasher' for the replacement and cut it to the right length.  Using some handy clamps and magnets I put the tube in place, put on all the safety equipment, turned on the exhaust fan and the welder, and moved into position. Very carefully, I pulled the trigger. 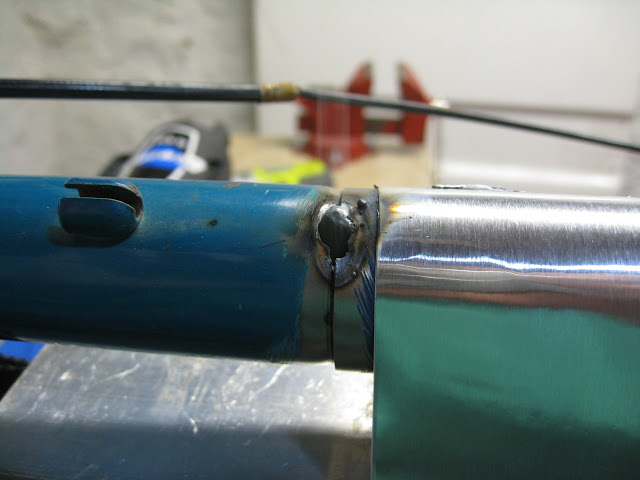 Wow, I thought: bike tube steel is very thin. I also realized I hadn't turned down the temperature of the welder since the last time I had used it (to join much heavier steel). After I made the adjustment, I gave up hope I could protect the new top tube's paint with a little piece of alluminium tape, and went at it. Sparks flew.

From time to time I had to raise the helmet to make sure I wasn't burning more holes in the steel or leaving holes when making a pass. Try as I might, I couldn't make the welds pretty.

But I did make them strong. Once I had attached the top tube and waited for it to cool, I cut off the bottom tube to see if the bike would stay together. It did. 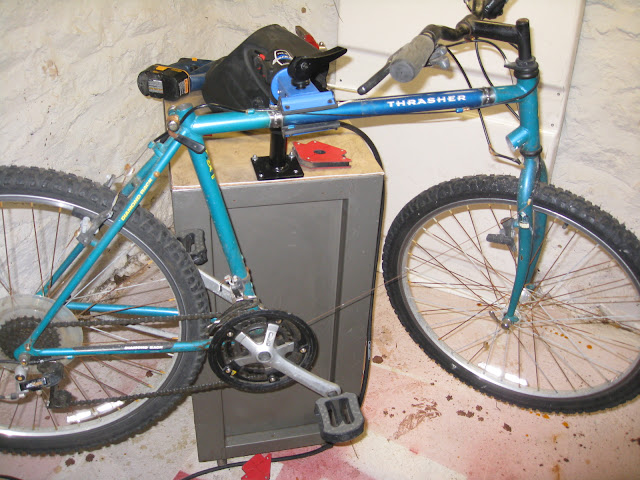 Now it would have made sense to use the bottom tube from the Schwinn 'Thrasher' to replace the bottom tube of the Sorrento. But I didn't have that, so I used a purple downtube from another Schwinn I pulled out of the Metal Only bin a while ago. I know nothing about that bike other than it came from a store in New Hampshire (while the Diamondback originally came from the excellent Mystic Cycle Centre). 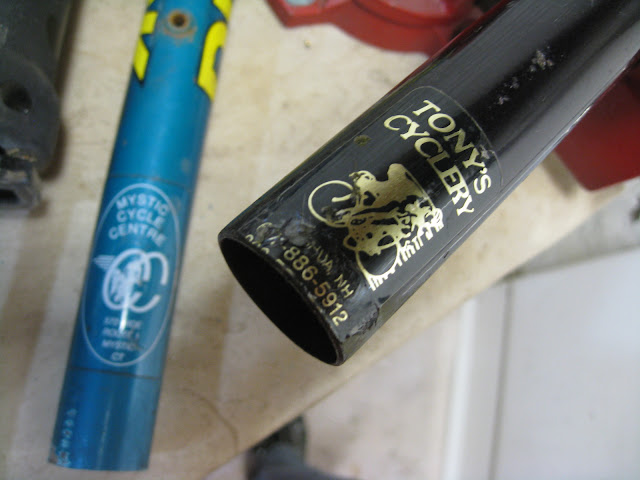 Once again, I lined up everything best I could and pulled the trigger. The welds still were sloppy-looking but the tube ultimately was welded into place. I set the bike down, put the seat back on, and tentatively sat on it.

It didn't collapse. However, I was facing some new problems.

You know those little things that are welded to the tubes that hold the cable ends in place? One of them is visible just above the 'S' in 'Sorrento' in the photograph of the first cut. If you ever cut a bike in half and replace it with tubes from other bikes, the placement of those things is important. Even if the cables on the Sorennto were good, I wouldn't have been able to reuse them because the little metal things welded to the tubes are welded in different places. That wasn't so much of a problem on the down tube, but the rear brake cable (which, as it happens, was one of the few cables that was actually in decent shape) would have to be completely replaced.

Another unforseen problem: the front derailleur shifter stopped working, possibly due to the trauma of the operation. So I was out a shifter as well. The rear one still worked, but barely.

In short, this project was becoming much more challenging than I thought.