When my wife and I rode our tandem in Branford a few months back I came home with this: a stripped Huffy courtesy of the good people at Zane's Cycles. 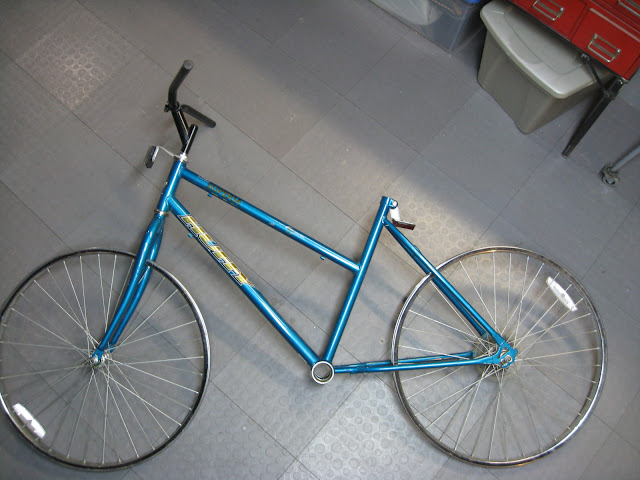 At the time I needed this bike for absolutely no reason, but it hung in the basement for more than two months before it came to my rescue.

You see, once in a while, my wife will ask me how many bikes I own. That is often my cue to freeze up like John McCain did when he was asked about his houses during the 2008 election.

How many bikes do I own? Well, it all depends on how you define the word "bikes"...and the word "own." There is a 1997 S&B recumbent frame hanging from a hook. Various tubes and other assorted parts from the Saved from the Scrapheap bikes are neatly organized in plastic bins. Bikes from that series that have actually been "saved" and not taken apart to the last hex bolt hang on the wall next to the beach umbrella. The mountain bike I built hangs among them like the well-dressed executive who shows up by accident in a biker bar.

If you have a Non-Cyclist Spouse (or NCS), harmony and compromise is key. So if you hear something like "you have too many bikes" don't get annoyed. Instead, see it as a challenge: use a bike - preferably one you were planning to get rid of anyway -  in such a way the NCS sees the value of having multiple bikes in the house.

So after the stripped Huffy had hung in my basement for about ten weeks, I took it down because my wife wanted me to build an enclosure for a blueberry plant in our backyard.

You'll see where I'm going with that in a second.

I knew this project was coming but I didn't know what I needed to make it apart from chicken wire, which I had bought from Keough's hardware store in Stamford for about $20. 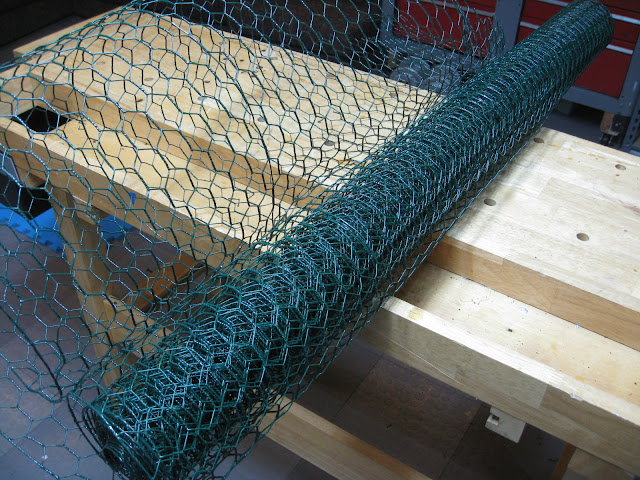 To work a bike into this project, I decided that the 26" wheel would be useful for making the right shape for the wire. I rolled out the wire and cut it to the circumference of the wheel. Once done, I cut another piece of chicken wire in the shape of the wheel to make the top. I was going to use twist ties to tie it all together but i found the chicken wire could be wrapped around itself pretty easily. 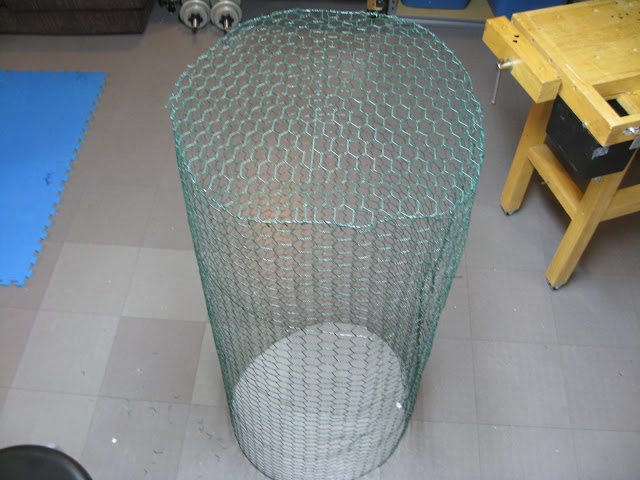 So I had the start of a chicken wire cage that would easily fit over the blueberry plant. But it was rather fragile so I decided to incorporate the 26" wheel into the construction. I set the wheel on the workbench and had a look at it. 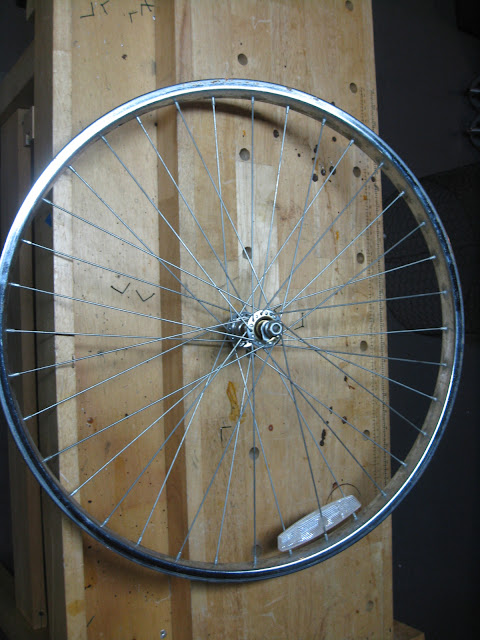 I knew the bolt cutters, which had come to my aid so many times before, would be the right tool. If you ever find yourself using a 26" mountain bike wheel from an old Huffy and decide to get rid of the spoke with a bolt cutter, cut the spokes furthest away from you: if the wheel is true and the tension is high, I discovered the first few spokes will shoot out of the wheel and fly a considerable distance. I'm sure I'll be finding spokes scattered throughout the workshop throught the summer.

With the spokes gone, I was left with a shiny metal rim, I flipped the enclosure over and attached the rim with garden ties. 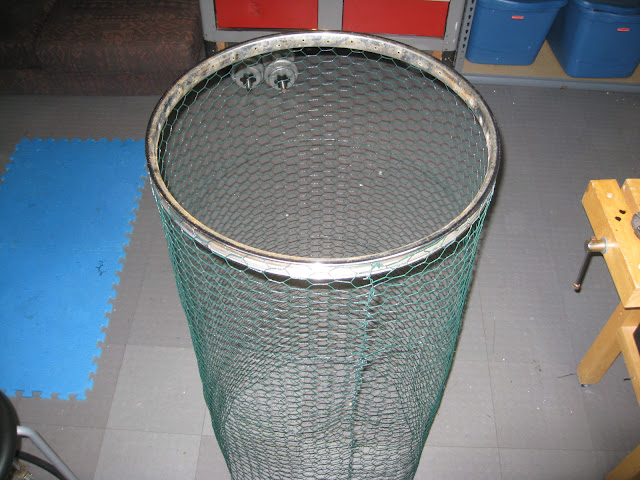 Once I was done, I had a fairly light but rather strong blueberry plant enclosure. I made sure my wife knew that a throwaway bike given to me by a friendly bike shop made it possible for me to protect our blueberries from ravenous birds. 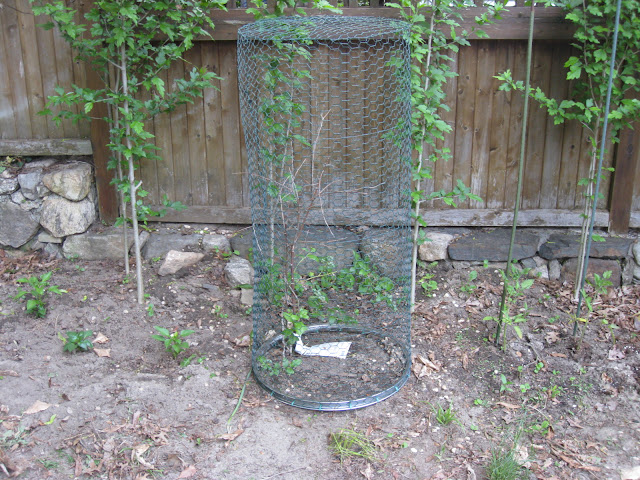 All in all, it was a good result. The Huffy served a great purpose and my wife saw (at least briefly) the value of the bikes and bike parts I bring into the house. I told her I still had a rear wheel and enough chicken wire left over to build another enclosure should she buy another blueberry plant. In the meantime, I'm still keeping the rest of the bike, but I moved it to another part of the workshop. Until I can find a more worthy one to put in its place, the Huffy can go on the Wall of Frame. 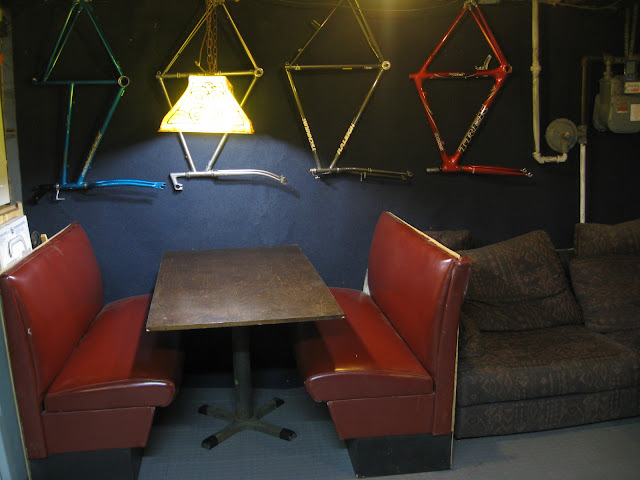