If you ever move to the Washington D.C. area from another state, there something you have to do before you find the nearest grocery store, figure out when garbage day is or locate the perfect take-out restaurant: join the Potomac Pedalers.

I have not moved to the nation's capitol (Stamford Connecticut is my home) but I can testify to the value of the Potomac Pedalers. After a particularly difficult week, I found myself heading to Maryland on a business trip that would occupy my time for only a few hours one Saturday afternoon. Though that did mean I'd have a few hours of freedom in the morning, I had little idea where to go and not a lot of time to plan anything. All I knew was that my wife was coming with me and we were going to bring the Dahon Matrix and the modified tandem attachment which served us so well in our trip through Branford, Connecticut.

I'm not sure what series of  things I typed into Google ("biking in Gaithersburg Maryland") but one of the first links I came to was Potomac Pedalers. It didn't take me long to be reassured the organization was run by my kind of people: the emphasis of the group is to create rides - they claim to offer over 1,000 annually - and the ride speeds range from 8mph to "more than 20 mph."

Since I didn't have enough time to sift through the links from the gazillion search results, I decided to send a note to the Potomac Pedalers introducing myself and letting them know I was going to be in Gaithersburg and looking for a place to ride - preferably car free and close to my hotel.

So the Potomac Pedaler who received my email did not simply send me a response. Instead he forwarded my e-mail to other Potomac Pedalers who responded to him and he sent their responses to me. It was one of those going-above-and-beyond moments that you normally get at an independent bookstore when you're looking for that book by that guy that was on that radio show last week.

Thanks to the Potomac Pedalers and their friendliness, I had a place to ride in early hours of Saturday morning in Maryland: 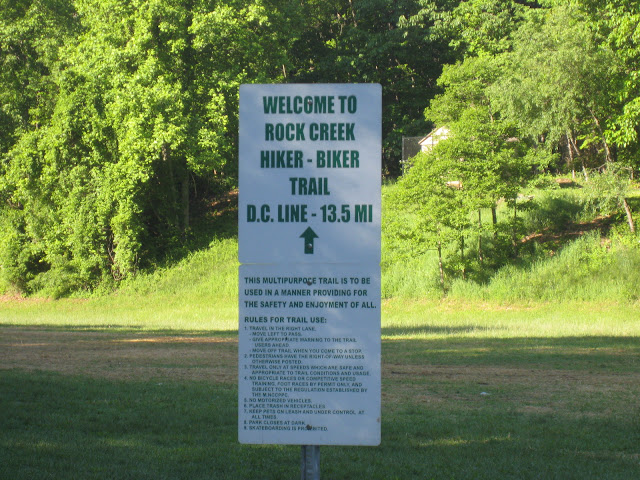 The start of the Rock Creek trail wasn't but a few miles from the hotel, and it looked like it was going to be a peaceful ride. I was sure we wouldn't be traveling all the way to D.C. because of time restraints, but we mounted the tandem and set off, determined to make the most of our time. 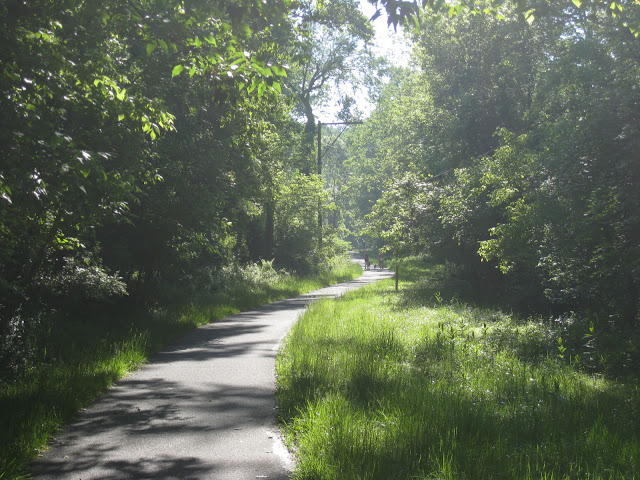 This is a trail for untangling one's mind - at least in the early hours of a Saturday. It isn't a long, flat runway like a lot of rail trails as it does have its share of curves, very slight hills, and a few details along the way just to make it interesting. 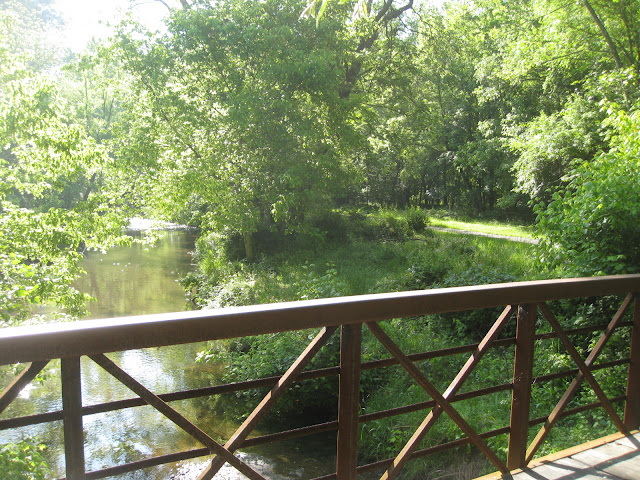 As with any rail trail there are places where it does have to cross the road. Maybe it is because motorists are expecting cyclists more often in that part of the country, maybe it was because they wanted a look at the tandem, but we found it easy to cross each road on this ride.

We really were enjoying the peace of this ride, even when we came to an area of the trail that contained an ominous warning. 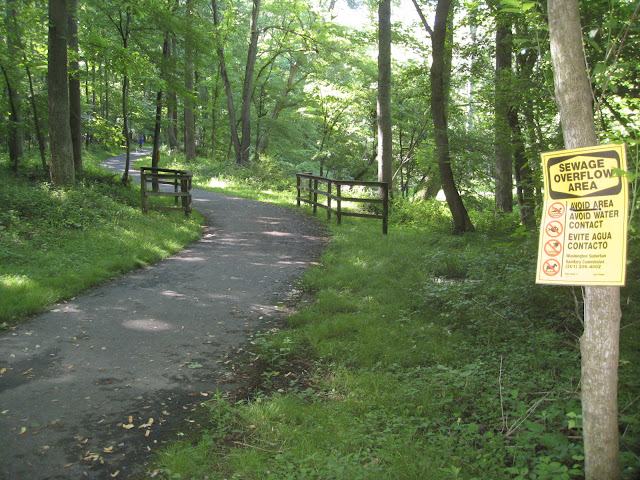 As we weaved our way slowly through the trees, we'd occasionally cross or ride along the stream and would sometimes see trees that looked like they were pulled from the set of Pan's Labyrinth. 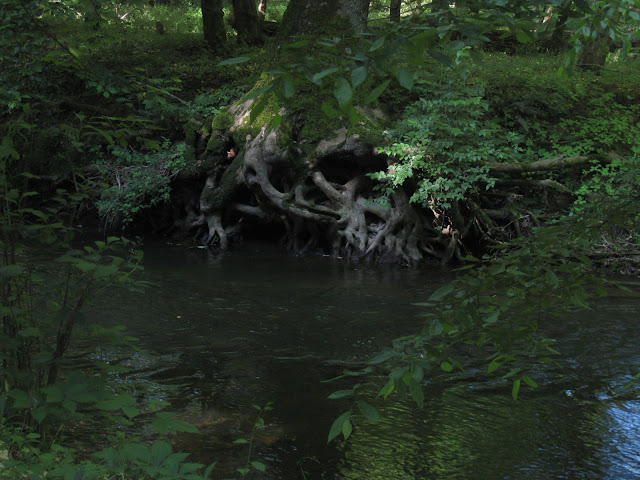 Mostly though, we saw nothing but sunlight streaming through the trees and the occasional jogger - which was fine by us. 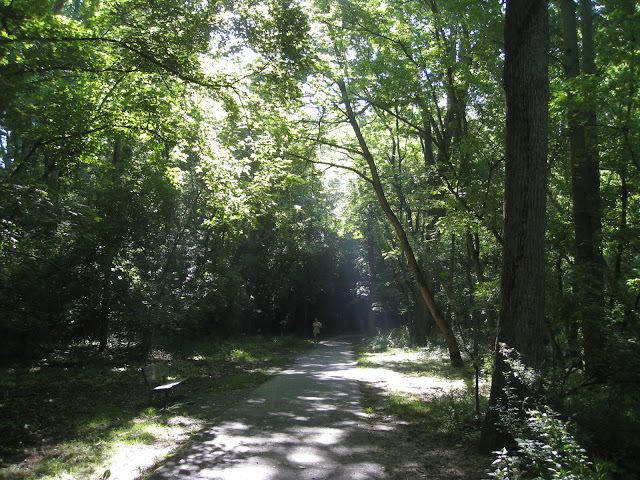 Soon we had to pass over a very busy road, and the Rock Creek trail (and its supporters) do provide a very nice way of doing so. 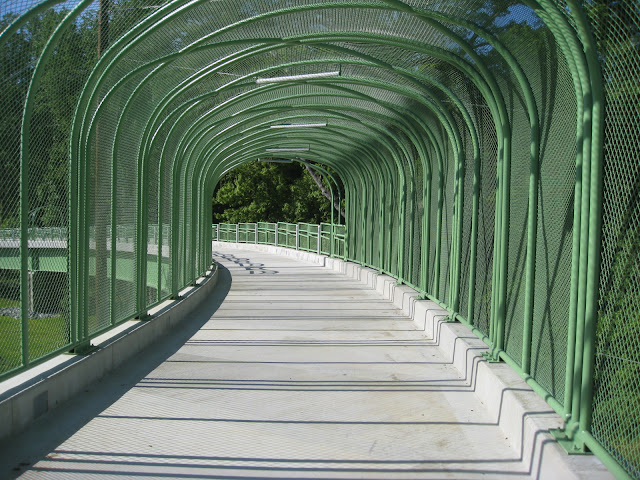 After crossing the bridge we came to a meadow where we made the unfortunate but necessary decision to turn back. I can't say I wasn't tempted to blow off the rest of the afternoon and just keep riding on one of the most peaceful rail trails on which I have ever ridden. 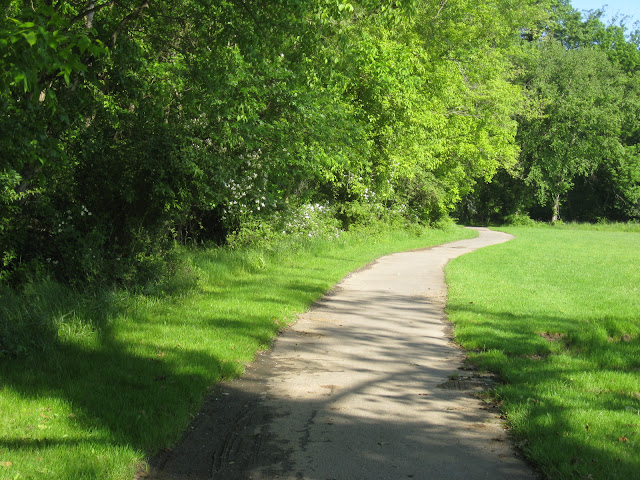 On the way back, one of the pedals fell off the tandem. Though I should have made sure it was screwed on tight before we set off I did have the proper tools to put it back into place. This meant we'd be spending a few more minutes on the trail. 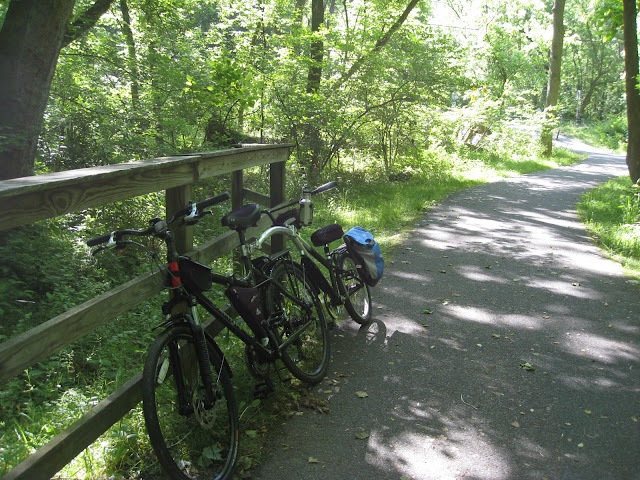 Once we had finished the ride, I was feeling much better about the difficult week I had experienced and was feeling more confident about the week ahead.

I was also feeling thankful for those who do the hard and important work of designing and maintaining trails, and you can visit http://www.parksvolunteers.org/ to help out. We ride hundreds of miles and can each help maintain a few feet. 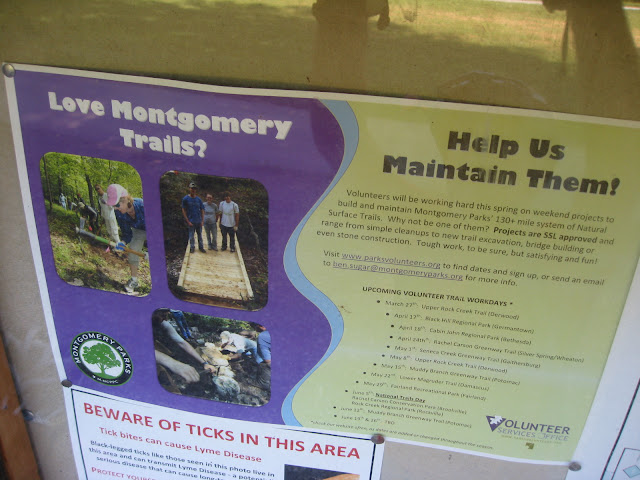 Finally, I was - and still am - grateful for the help of the Potomac Pedalers and will be sure to check their ride schedule before my next visit to the area, which will hopefully involve several days, a few bicycles, many more miles and no business meetings.