When we last left the Turner Hypercycle, it had successfully survived phase one of the operation: it now had a beam, made from the top tube of an old child's bike, that I had welded into place to be used to hold a front derailleur. Now I needed to find the missing piece to the old Suntour front derailleur I had.

I tried one store. No luck. I tried another. Also no luck. Finally, I went to Smart Cycles in Norwalk; a store I had somehow never visited before. I especially liked the message on their front window. 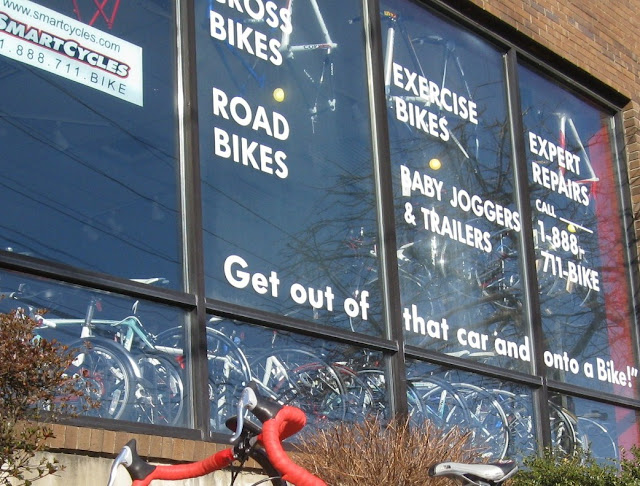 I found the store well stocked and the staff to be friendly. One guy I spoke to at length about the derailleur issue was quite intelligent and a good listener. And, in a day that had been marked by failure, I left Smart Cycles with this. 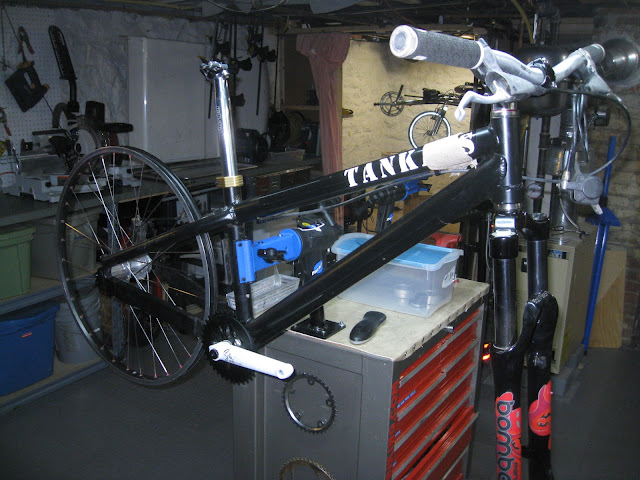 I did find the guy at Smart Cycles to be...well...smart. He just couldn't find or sell me the part I was after even as showed topnotch customer service trying to help. Part of it was my fault since he had no idea what kind of bike I wanted the derailleur to be installed on. He suggested that I use a metal cable guide that could go under the bottom bracket and up the seat tube (he explained all this with ordinarily helpful hand gestures that do not apply to the recumbent) but I said it wouldn't work for what I had and thanked him for his help.

But I did ask if the store had any junk frames lying around. As it turned out, there was. Since Saved from the Scrapheap law stipulates that at least three-fifths of a bike must be present for said bike to have it's own post, this whatever-it-was with a frozen crankset just became a nice afternoon diversion. Stripping a bike to the last hex bolt is good for the soul. Can't believe nobody ever wrote one of those 'Chicken Soup' books about that. 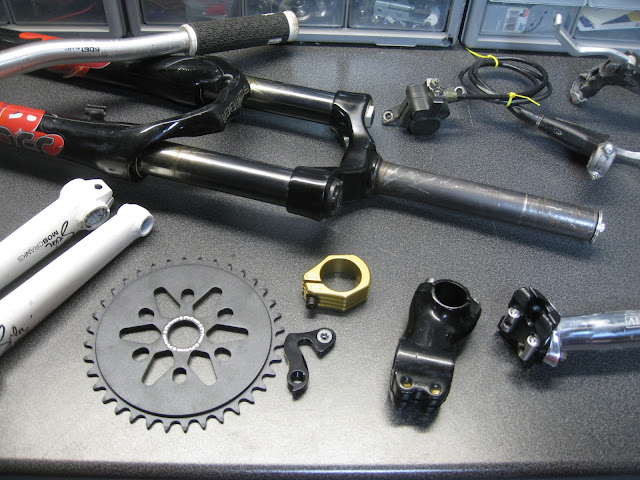 None of the bits I took from the junked frame would help me finish the surgery on the recumbent. However, as you can see I was faced with having to put away a few parts, and that meant I needed to open the bottom drawer of my workstand, which I had filled with a number of old bike parts to serve as ballast in order HOLD THE PHONE.... 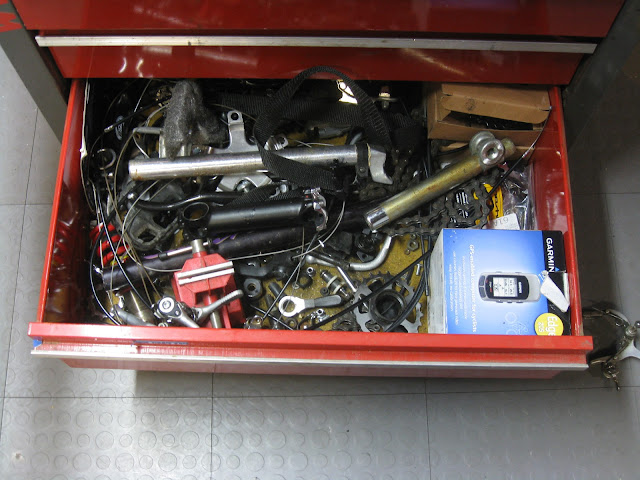 The ballast drawer. Why didn't I think to look in there?

My trip to Smart Cycles (and there will be others) turned out to be a big break: If I hadn't gotten the odd frame I would not have had to store the parts in the ballast drawer of the workstand.

I started rummaging. As the name implies, the ballast drawer was only meant to keep the workstand from tipping over if I were ever to put a heavy bike on it. There were a lot of small parts in there and I almost couldn't believe what I found after only a few minutes of searching. 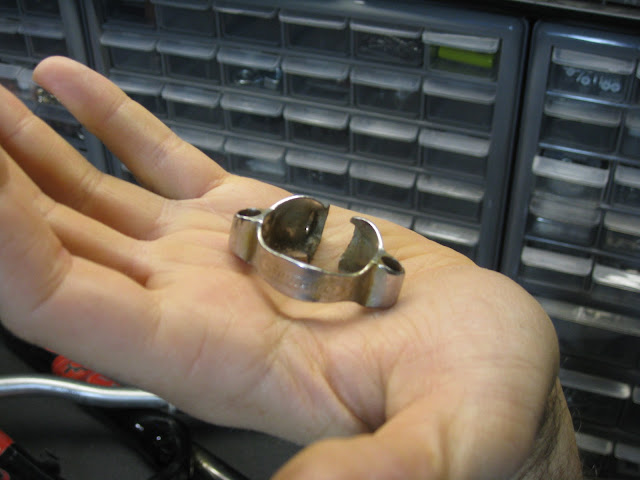 It reads 'Shimano' on it, and aside from there being openings for two cables, it was exactly what this project needed. I'm not sure which Saved from the Scapheap bike produced this bit (my hunch is it was the old Fuji Espree; which would be very Shel Silverstein's 'The Giving Tree' as that bike gave the recumbent the 27” rear wheel it uses today).

In minutes, I set the little metal guide in place and, using a spare cable from a right hand thumb shifter, temporarily hooked it up. 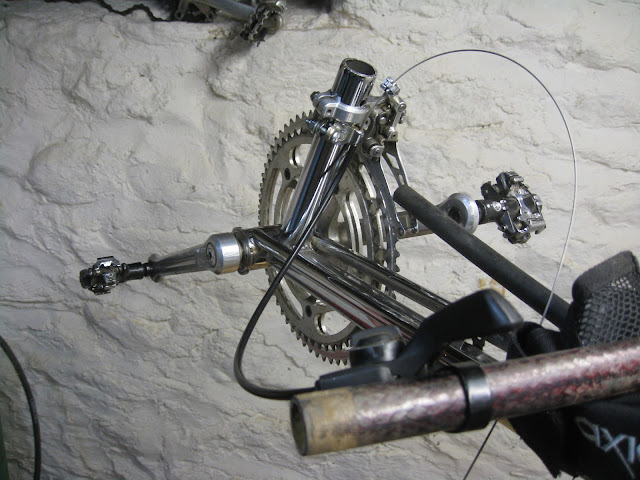 Now as you can see I had no chain on the bike. I did take one from the ballast drawer and send it through the chainring while pushing the shifter with my thumb. It kinda worked, but it was the kind of kinda that made me confident it could handle a real world setting. Probably.

But I was faced with another problem: I had no left hand shifter of any kind (the last one was used when building the DiamondSchwinn). It was early Sunday now, and I reasoned I could wait until stores opened and go out to buy a twist-grip shifter to match the one on the right that controls the rear derailleur. 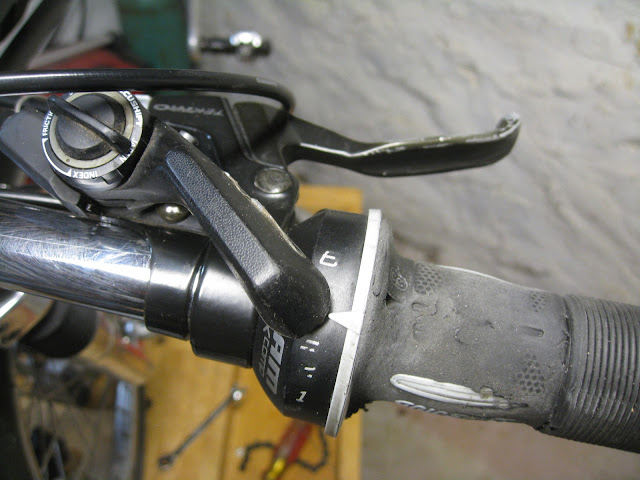 The old school thumb shifter installed easily and the lever is right where it needs to be without interfering with the twist grip. I could control all twelve speeds with one hand. As a bonus it meant I didn't have to move my Incredibell which is mounted near my left hand.

I shortened the cable and adjusted the limit screws. I don't want a ten-and-a-half foot length of chain falling off on a ride. At least not more than usual. 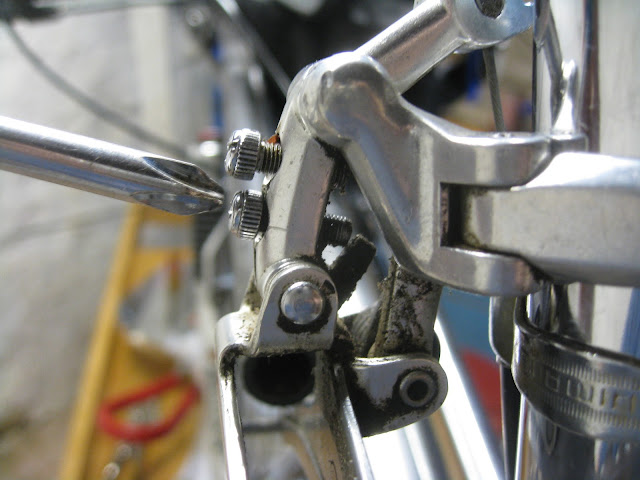 When I tested the shifter again, my stomach nearly dropped into my shoes when the crank arm began rubbing against the derailleur. In my haste to make sure the welded section of steel would be close enough to the crank, I didn't account for the fact that the derailleur itself could become a new problem. Thankfully, I was able to adjust a limit screw so the derailleur would be able to move the chain and miss (barely) the crank arm. 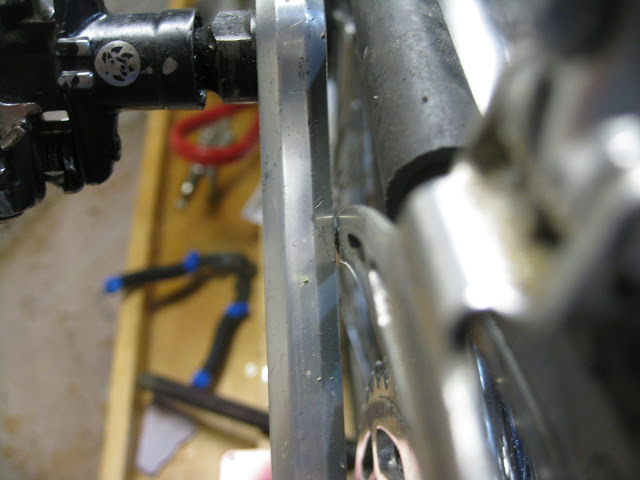 I know it doesn't look like a gap, but trust me: it's there.

Finally, it was time for the always unpleasant task of putting on the new chain, which consist of three nine-speed chains connected together. One of the sections neededed to be shortened, so after painstakingly pushing the pieces of chain through the chain tubes I installed a Dremel bit to keep it in place while I figured out how many links I'd have to remove. Standard procedure. 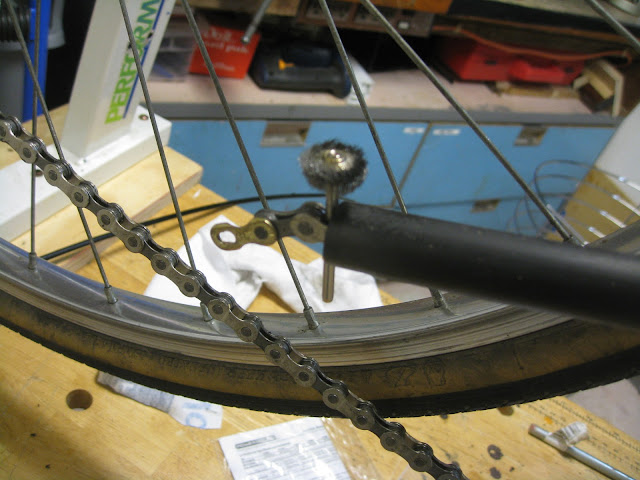 Before long, I had the chain on and had come to a moment of half-truth: would it shift? Still on the operating table, I pedalled the bike with my right hand and squeezed the shifter with my left. The chain moved from its prison on the 52 tooth chainring and jumped proudly into position on the legendary 60 tooth ring. 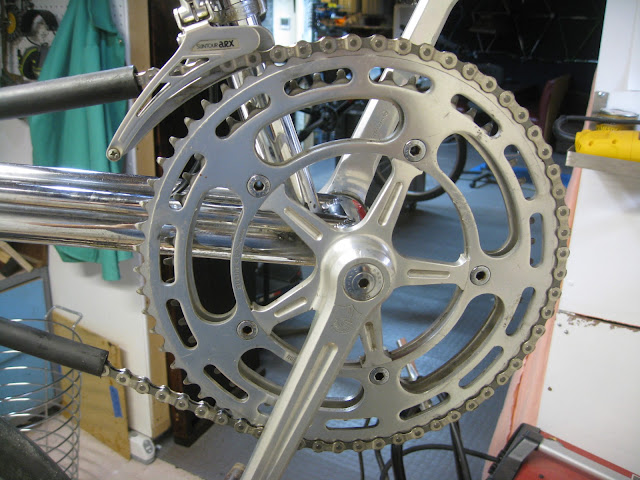 It was time for a moment of the other half of that first half-truth: would it shift in a non-workshop setting? I threw on some bike shoes and carried the bike outside. 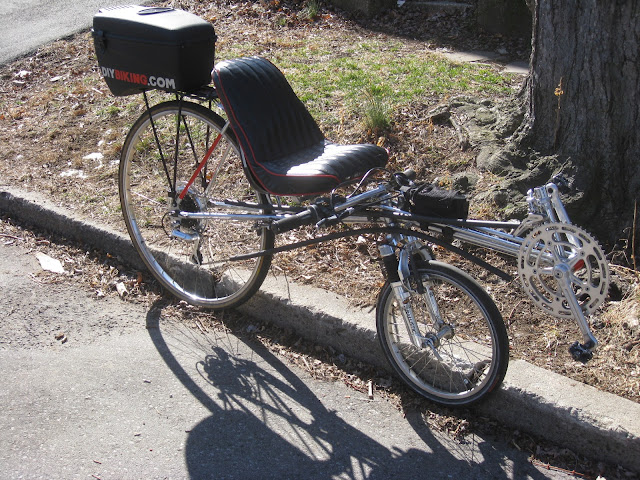 Prior to carrying the beast up the flight of basement stairs, I had shifted the chain back to the 52 tooth ring so my test ride would start in the ring I was familiar with (that, and starting from a dead stop with a 60 tooth ring isn't ideal).

I pedalled down the empty street, a little off-gaurd as I wasn't used to seeing the metal bar and front derailleur in place just at my feet in front of me. I picked up speed and twisted the grip shifter to put myself in a higher gear. With the same hand I pushed the shifter with my thumb.

The chain moved. As I watched, it climbed from the 52 tooth ring right up to the 60. Almost immediately, it felt as though the bike was harder to pedal – but was going a lot faster.

I shifted back to the 52. I turned onto Shippan avenue and shifted back to 60. I turned right to go to West Beach and the bike felt like a rocket. Back to 52. Back up to 60. The welds held and the shifter worked perfectly. The operation was a success. 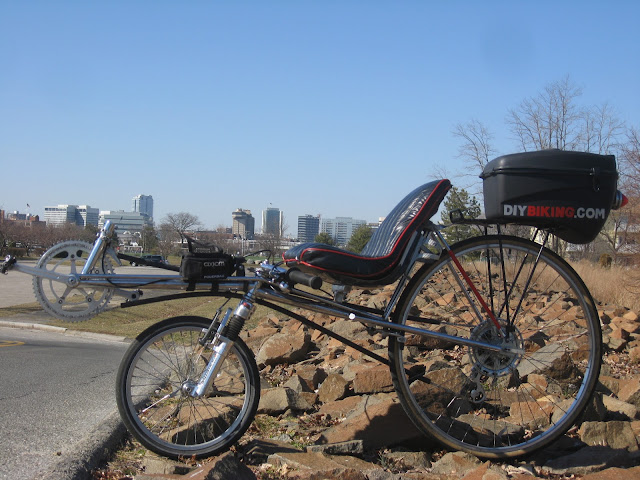 With parts from four different bicycles, I had turned the Turner Hypercycle recumbent into the Toyota Hilux from Top Gear: It was back from the brink, and I had actually made something that worked and worked better than it did before. I could just see the future episode of Storage Wars that would unearth this frame:

“What's it worth?” Barry Weiss would ask.

“Wait. The founder of DIYBIKING.COM?”

“Yes. I can tell because of the signature welding style. A lot of critics at the time suggested it was sloppy but because the welds were so strong everybody tried to copy his method for years afterwards. But this is definitely the real thing.”

“I would say without hesitation that it's worth...”

Thanks for tuning in. 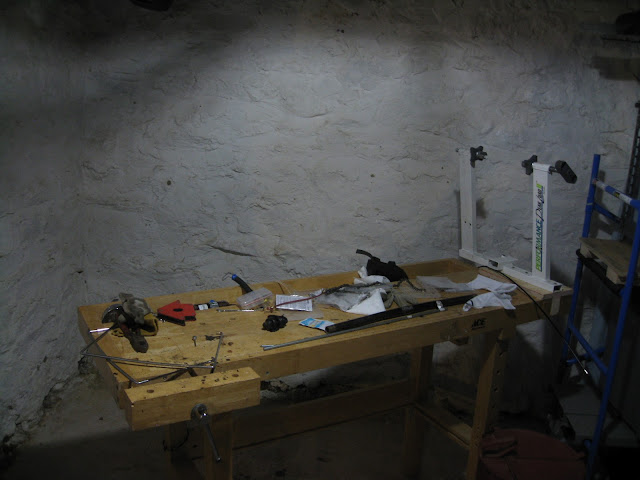