Over a year ago, I set out to build a mountain bike. This one. 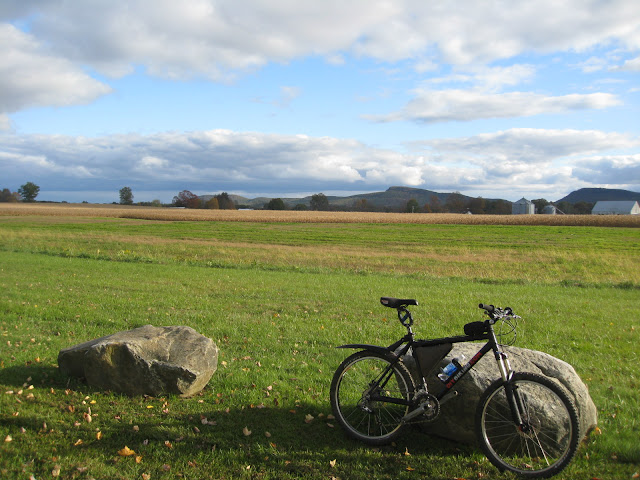 This was a great project for so many reasons. I finally had a project where I wasn't being hounded by anyone to meet or beat any deadline: I got to enjoy the doing part. I got to have regular contact with my cousin so he could give me advice and some great parts. The bike took me to some great adventures in the Northeast Kingdom in Vermont, Bluff Point State Park, the Mianus River Park and elsewhere. And a photo of the mud-spattered downtube made the header for this web site.

But I didn't want to stop building it. With fresh memories of the dreadful brake performance I bought another set. However, for some reason, I didn't put them on right away.

Even though I wasn't thinking about it at the time, I was subconsciously readying myself for a visit to my cousin's house so my wife and I could spend some time with them and their new baby (who is actually less new than from when this photo was taken). 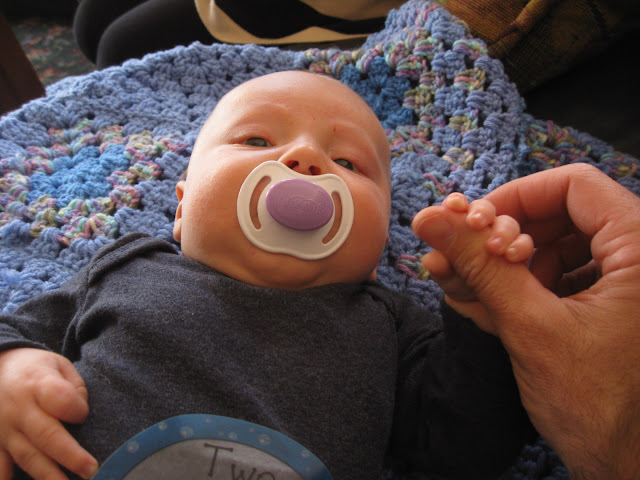 Shortly before dinner, my cousin brought me to his shop to show me the mountain bike he had just built with a new frame. He said he was attempting to sell his old frame on eBay...and pointed to the wall where it was hanging.

It was a full suspension Specialized frame, and something in me clicked. The frame my mountain bike had was a hardtail, and I could see a bike with this frame. A bike I hadn't built yet. And I could put the new brakes on it.

The next morning, I emailed my cousin and told him wanted it, and he immediately removed it from eBay and knocked the price to a Family Discount level.

The day I met Stacey was supposed to be the day I was to meet my cousin for lunch so we could trade money for the frame. As we all know, he cancelled. But we were able to meet in Fairfield a week later...and I came home with this. 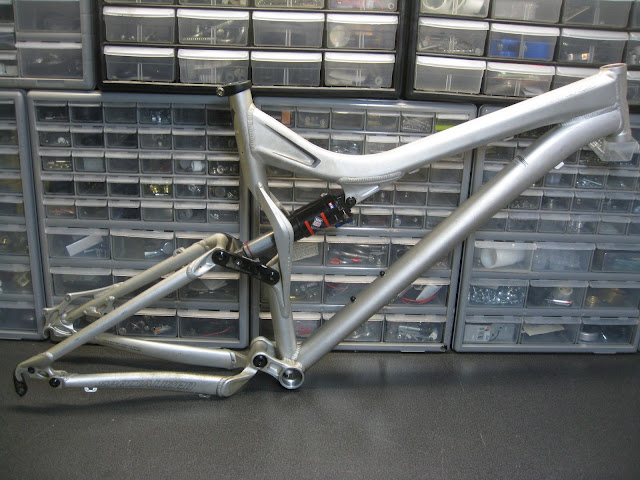 It's definitely not 'new baby beautiful' but it is quite nice to look at. Cost, complexity, and my inability to find a full suspension frame I liked kept me from building the bike with articulation in the first place, but you can hopefully see why I wanted this one: it was a non-gently used frame, but it came from a trustworthy source. 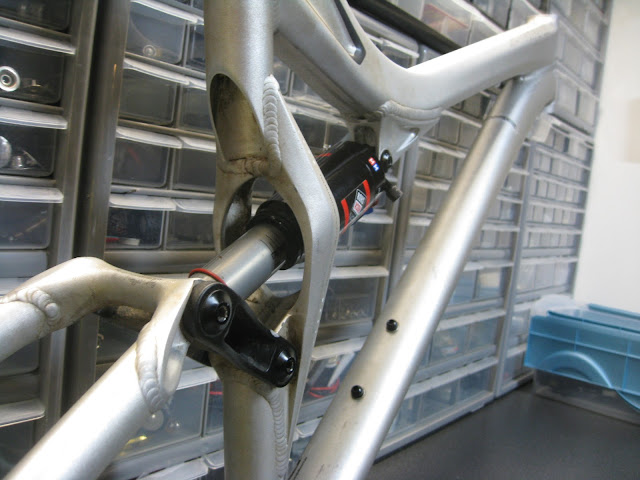 The move doesn't abandon my inherent love of hardtail frames. I grew up with them. I own two bikes (maybe more) with no suspension, but for the paces I like taking mountain bikes through, I decided it would be nice to have the extra level of comfort. When you look at the bikes I own, you'll immediately see that I almost always pick comfort over speed: the recumbent has a lovely armchair quality for long rides and the Dahon Matrix and the mountain bike have shared the same comfortable seat and Cane Creek Thudbuster seatpost.

Even when you do something like add a suspension fork to a bike or a Thudbuster seatpost, comfort in general and ride quality in particular is hard to quantify. But one afternoon I decided to do it anyway. 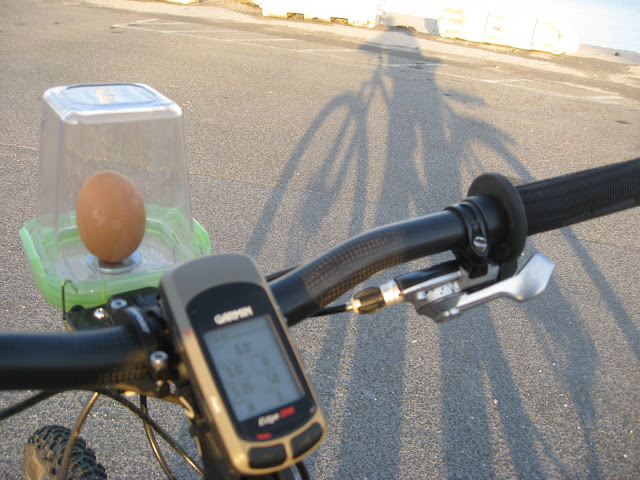 The camera mount my grandmother had given me for Christmas was proving itself to be incredibly useful for everything from carrying a miniature Millinium Falcon in front of the HD Hero2 lens to, as it turns out, transporting a solitary egg. As you can see the egg is in a watertight container and balanced on a metal washer. There could be a whole series of challenges based on this setup (i.e., what cities have the roughest roads, what bikes have the stiffest suspension) but for now I just wanted to see how my hardtail mountain bike would fare.

With the parking lot at West Beach almost completely empty (save for the guy who stared at me for 10 minutes before leaving in haste) and the bike GPS set to zero, I set off. The egg fell off its perch on the washer almost instantly.

As I quickly discovered, carrying an egg in this fashion has an unusual pyschological effect. Sometimes on rides you just feel every crack, sewer grate, manhole cover, rock, dip, tree branch, flattened cola can, puddle, dead squirrel, abandoned shoe and fallen campaign sign. On this ride, a relatively smooth parking lot, the egg's vibrations were telling me that the surface wasn't as smooth as I thought.

Finally, after about a quarter of a mile (and the most gently hopped curb in history) the egg decided to call it quits. 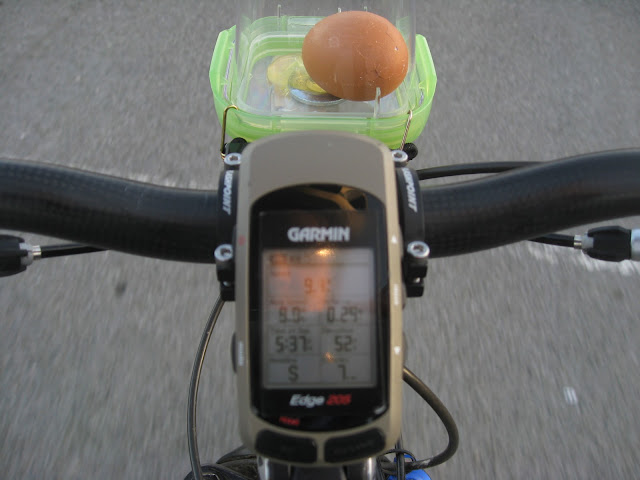 Now remember, while a hardtail, the mountain bike does have an excellent suspension fork, which I thought would at least cushion the egg's handlebar ride slightly. I cleaned the broken egg from the container, locked out the suspension, and put another egg in the container. As I suspected, it didn't last long without the front shock.

Finally, it was time to test the ride quality on the other side of the bike. For this test I attached a quick release rack to the seatpost and reset the test with a third egg. 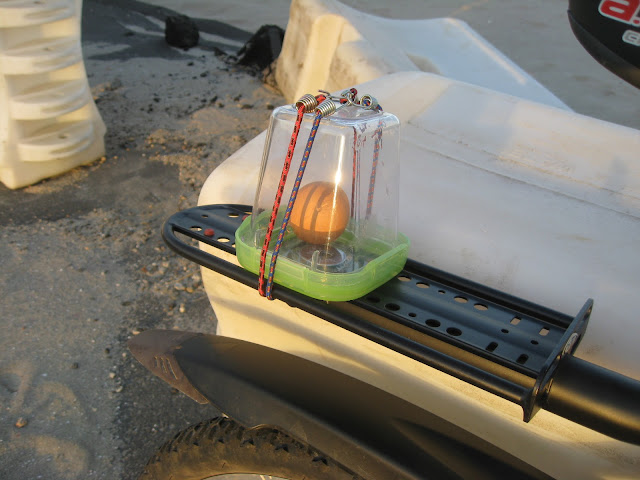 At first I thought the test would be more difficult because the egg was mounted in a place where I couldn't see it. But it was easier than I thought because all I had to do was ride until I couldn't hear the egg rattling anymore. Barely 1/6 of a mile after I set off, I turned back and saw this. 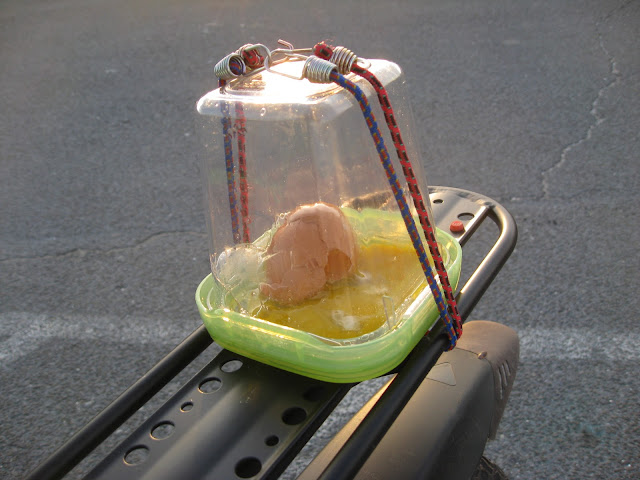 Careful observers will note that this egg broke differently from the two handlebar eggs. Instead of rattling to the point of creating stress fractures in the shell, this one broke violently; as though someone had thrown it to the ground. Later I took the fourth and final egg and attached it to the Thudbuster seatpost itself, and that egg shattered in a similar fashion too (and surely wasn't heavy enough to make use of the Thudbuster's suspension).

Armed with data about how well the old hardtail frame worked at transporting breakfast food, I decided it was time to make the switch to full suspension - which would be a fun project and almost surely give me a smoother ride.

I set up the empty frame on one side of my workstand and the old hardtail on the other. It was time to start the operation - and find out just how many parts from one would be incompatible with the other. 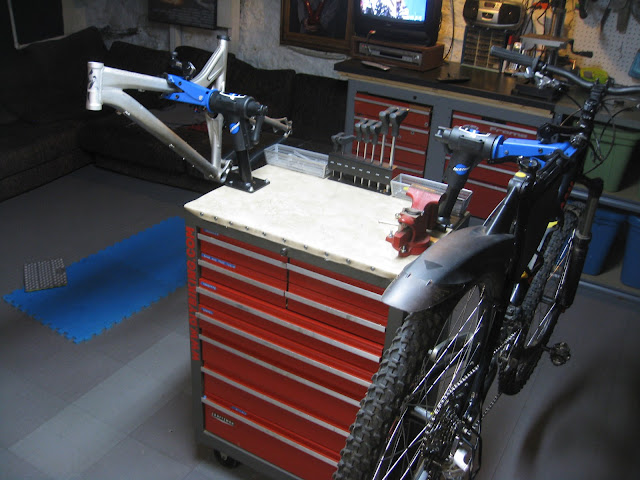