I apologize for the unusually long gap between posts: I was traveling for the past 15 days in a stew of business and vacation time. I still have currency from three continents in my wallet but I want to talk about some of the trip while I recover from the jet lag.

As I've said before, I'm lucky enough to get to travel to England about once a year. But my luck doesn't stop there.

Thanks to my wife's ingenious maneuverings with planning trips, we got to go a few days before the actual business part of our business trips were to begin, which meant we could visit friends in the county of Buckinghampshire. S.K. and his wife are generous and wonderful people who, on this trip, not only picked us up at the airport, but allowed us to stay with them in the guest room of their home on the top floor. 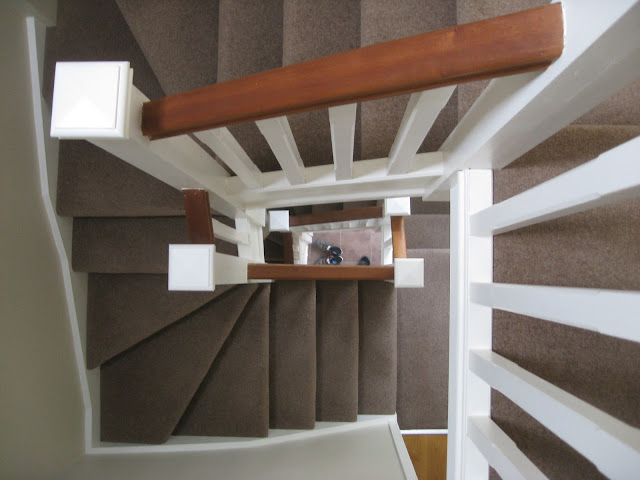 My luck doesn't stop there, either: S.K. is a cyclist, who's serious and laid back about the sport at the same time. He's about ten years older than me, in better shape, and knows exactly what he's talking about when bikes come up in conversation. If my cousin (the Mountain Bike Jedi Master) was fifteen years older and had a British accent, this is the cyclist he would be.

A few days before we were due to arrive, S.K. invited me to go with him on a Sunday morning ride through the English countryside. Since I couldn't bring a bike with me on this trip, he said I could borrow his commuting bike or his wife's road bike. I was worried about keeping up with him on either: on this long trip, my wife's suitcases and my own were already filled to the point of bursting so I couldn't bring my bike shoes.

However, the day before the ride S.K. and I had a revelation that changed everything: our feet our exactly the same size, so he loaned me his extra pair of bike shoes. And that meant I could borrow his wife's road bike. 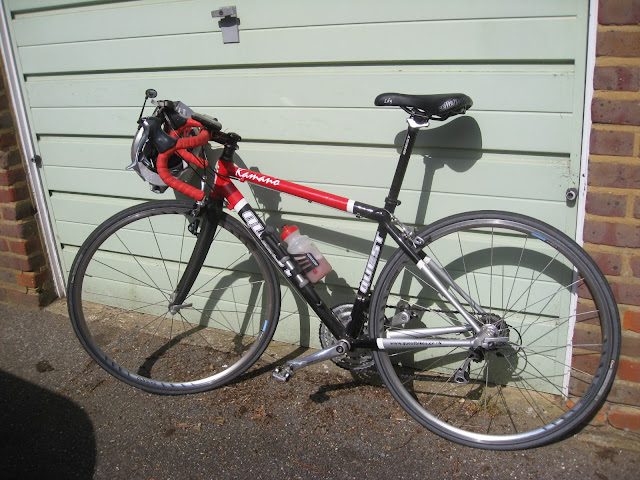 This is a bike from a company that ends its domain names in '.co.uk' so I had never heard of it before. The frame is light and stiff...but yada yada yada: it was a bike that I could ride and fit on, so it made me extremely happy.

I did run into a bit of embarrassment when testing it out: as I've said previously, most of my history is rooted in mountain bikes, and as much as I love my Bike Friday New World Tourist, the old school shifters on the bar ends was all I knew about shifting a road bike. I rode to the end of a street on my borrowed Quest using the tiny levers beneath the brakes, but I didn't know that to upshift I had to push the brake levers themselves. S.K. had to show me how it was done, and I marveled at the simplicity.

When I said I was slowing infiltrating road bike society, I didn't realize just how slowly until that moment.

But with the equipment good to go, we planned to set off early the next morning into the English Countryside. The ride was to be about 35-40 miles – nearly double my ordinary Sunday morning rides. I was worried about showing up at my conference the next day sore and stiff, but that worry was balanced out as I thought a long ride would help me deal with the five hour time difference.

Around 3:00 in the morning U.S. time, we started our ride with beautiful sunny weather. Not only was I thankful for S.K.'s shoes and guidance, but following him made it easy to remember that they drive on the other side of the road here (I did pack my own helmet, and I carefully placed the rearview mirror on the other side before the ride so I'd have notice before Range Rovers would pass). 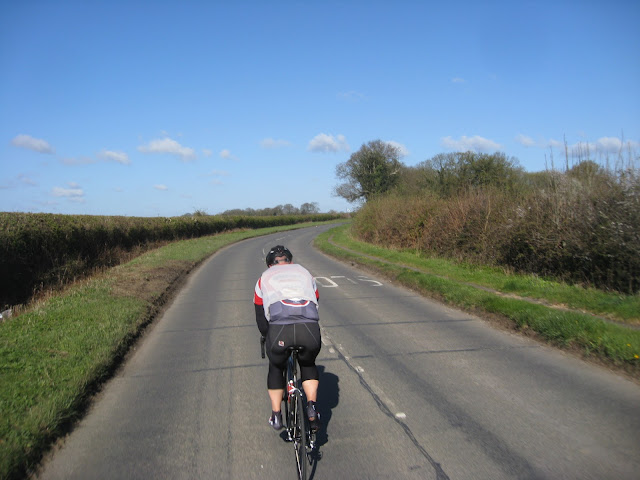 We originated our ride from a town which had the British-sounding name of 'Chalfont St. Giles' and out trip took us through other towns that had similarly British-sounding names like Chivery, Amersham, Birkhampstead and Hogpits Bottom. A number of the houses looked straight out of the Harry Potter films, and others were just plain interesting: this one had the carving from the front of an old ship in the front yard for decoration. 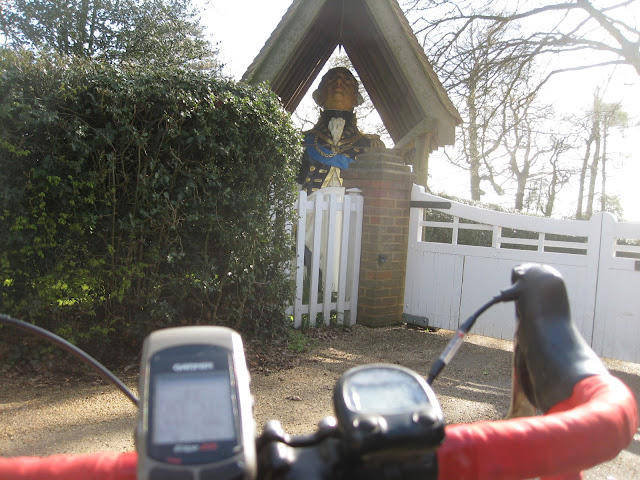 That was one of the few pictures I took while standing still: the rest of the time I was trying to keep up with S.K. as we headed through the countryside. 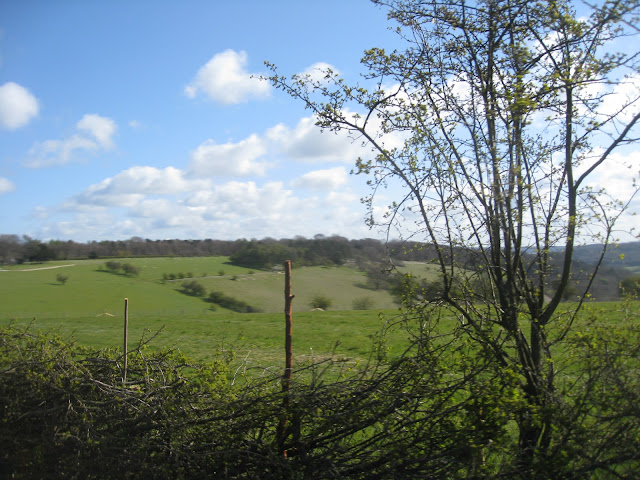 Before long, the distance between my front tire and his rear tire opened up considerably. Since it was an unfamiliar bike and an unfamiliar place I didn't ride as fast as I normally do. Well, that's what I told myself anyway. 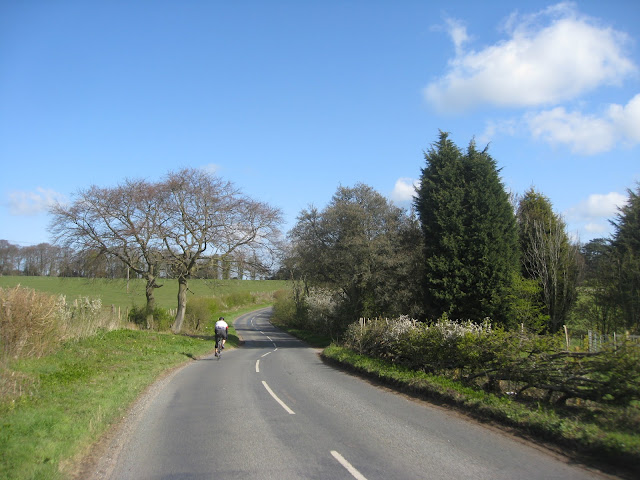 Soon after a particularly punishing climb, we stopped at the top of a hill so S.K. could show me the valley we were about to head to that contained P.E. Mead & Son's country store/tea shop which represented a place where we could rest and get coffee. 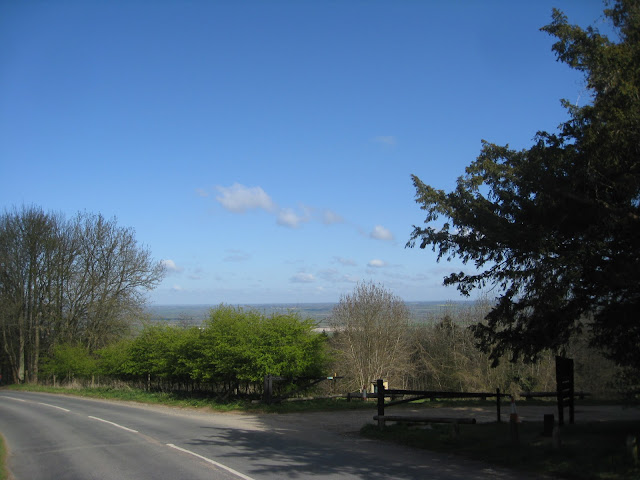 After warning me about the sudden stop at the bottom, S.K. took off like a shot down the hill, and I followed as quickly as I dared with the spedometer passing 40 mph. I was careful, though: If I died, my wife would never let me hear the end of it.

But I made it down the hill safely, and after we turned right we made an immediate left to head further into the valley. I stopped VERY briefly to take a picture as S.K. blasted down the next hill. See the little speck on the road in the distance? That's him. 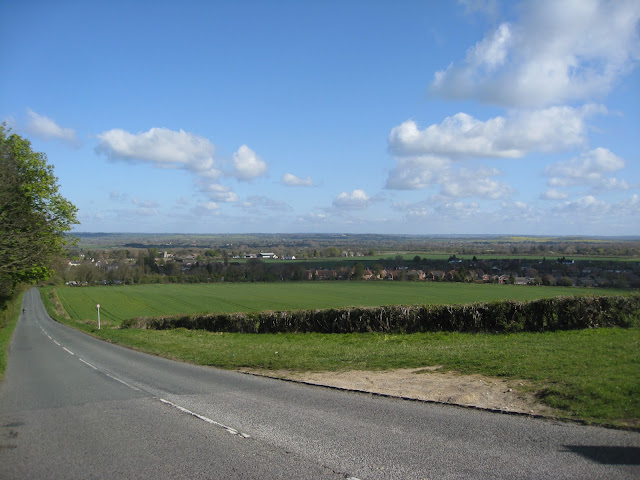 I clipped back in and raced down the hill, catching up with S.K. at the next intersection. After our descent into the valley and a total trip distance of 17 miles, we arrived at P.E. Mead & Son's, which is affectionately known as The Black Barn by S.K. and his friends as it is a frequent stop on their rides – the British equivalent of Connecticut Muffin Company in New Canaan, and yet so much more since it stocks many varieties of local products. 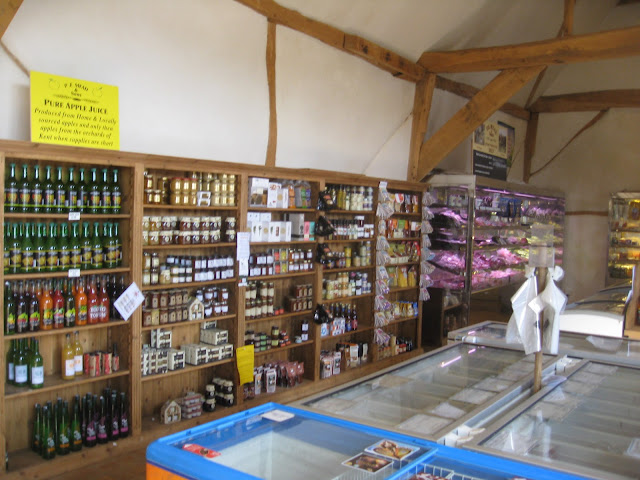 With the British pounds I withdrew the day before, we got ourselves some fine coffee and delicious baked goods before we sat at the tables outside to enjoy breakfast and keep an eye on our unlocked bikes. We discussed various riding preferences and strategies (S.K. likes to plan rides that head into the wind on the outbound part of the trip and with the wind on the way back) and whether the term 'snot rocket' was the same in the U.K. as it was in the U.S. – common topics in British-American cycling relations. 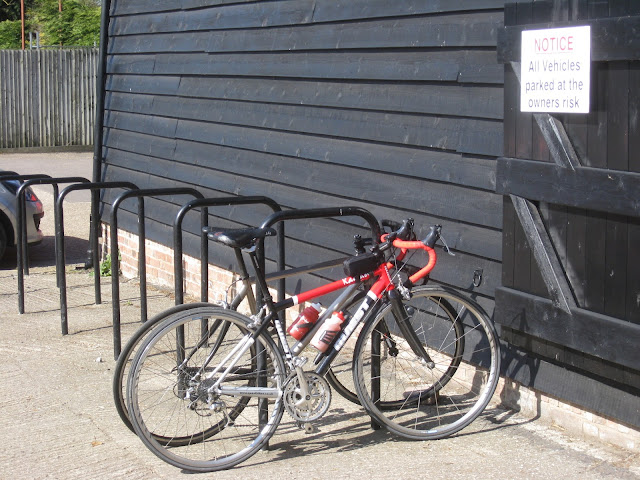 Once fueled, we headed back to Chalfont St. Giles through Tringford and a slew of other towns with interesting names. While the trip to The Black Barn often brought us on two lane roads that were mostly empty (save for the occasional person on horseback or Range Rover) this route brought on narrower passages that again showcased the stunning landscape. 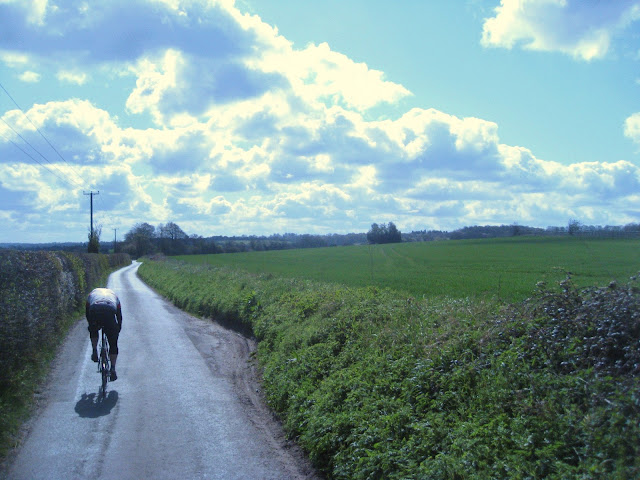 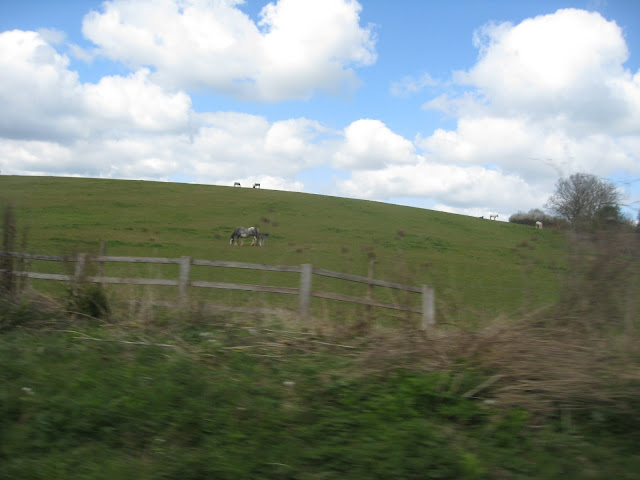 There was one big hill to climb, and now over 30 miles in I had to give it all I had to get to the top. Regrettably, I used the tiny chainring of my borrowed bike and wondered again if my switch to the 53-49 chainring was a good idea.

But after cresting the hill, I got some of my steam back and was able to ride all the way back to Chalfont St. Giles keeping S.K. within conversation distance. By the time we got back to his house, we had logged in 37 miles. I thanked his wife profusely for the use of her bike, thanked S.K. profusely for the use of his shoes and for the tour of the English Countryside – which is worth the plane fare to Britain by itself, so when you go to Britain, find a way to take a ride from Chalfont St. Giles (just a quick train ride from London) in just about any direction that you like. I just hope that when they make a trip to visit us in America one day, I can find a bike route to take S.K. on that will rival that one.

Unfortunately for me, I couldn't stay long after the ride. I had to go to the the nearby railway station to head to my next destination and prepare for the business part of my business trip. Still, I was confident that I could fit some more biking in while in London – and I'll tell you why in the next post. 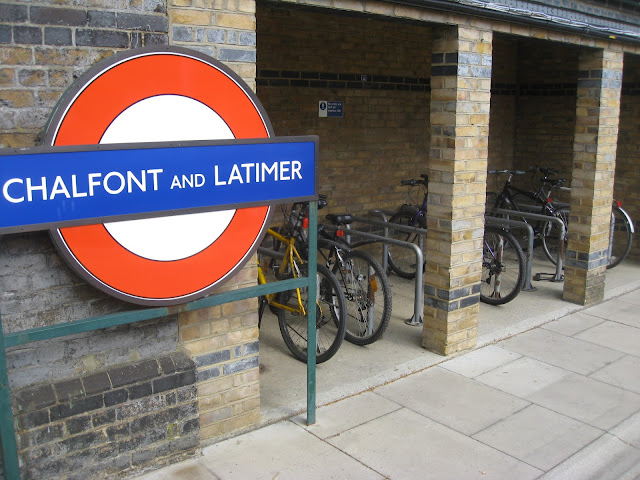