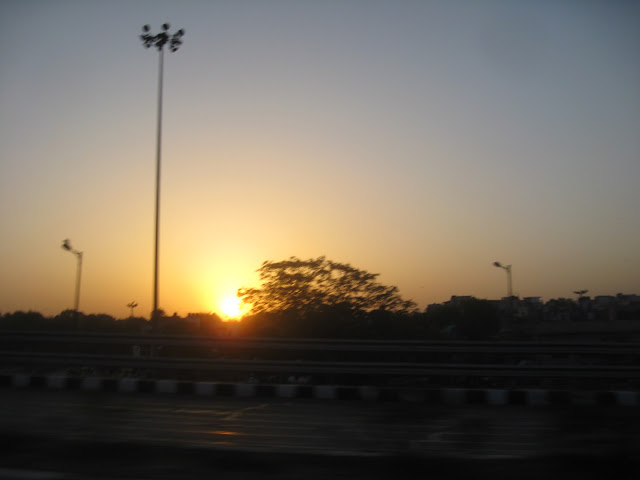 I managed one feeble sunrise photograph from the window of the taxi as it was heading from my hotel. My body was sure it was almost 9:00 at night in spite of the evidence Delhi was providing to the contrary. I had denied myself coffee as I was trying an experiment to combat jet lag: to confuse my body clock as little as possible, I was going to drink my usual two or three cups of caffeinated goodness at 6:00 in the morning Stamford, Connecticut time, which was going to be in mid-afternoon, well after my group bike ride was to be over.

A Google search had brought me to Delhi by Cycle weeks earlier, and after a couple of e-mails between myself and one of the guides, I was convinced the Shah Jahan Tour, the company's 'classic' tour of Old Delhi, was the one I wanted. It also fit into my schedule, but barely: the day of the tour was the same day my wife and I needed to check out of our small Delhi hotel and check into the Leela Kempinski hotel in Gurgaon. So immediately after the tour I was to head back to the hotel, gather our bags, and take a reasonably-priced car service to Leela.

First I needed to accept the early meeting time, which was 6:30 in the morning in front of the Delite Cinema. Once I met the guide, Bert, I took a look at the provided transport for the three-hour tour. 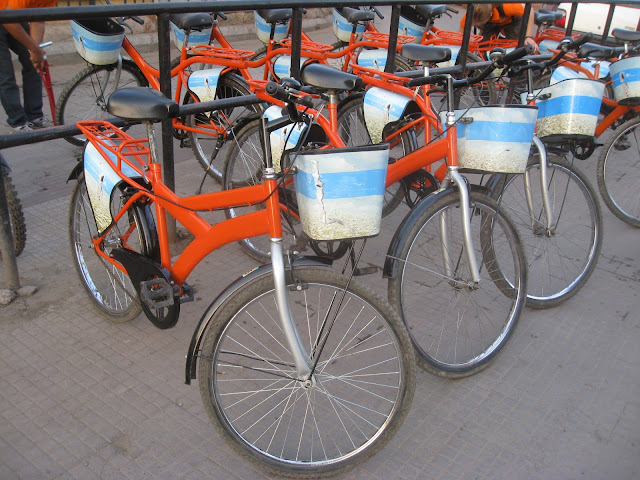 The bikes looked good to me. Delhi was pretty flat and nearly none of the bikes or even trikes I had seen up to this point had derailleurs to speak about. I'm not sure of the brand that the bright orange bikes hailed from, but they were rugged, had reliable brakes, a comfortable seat and a cargo basket. The only thing that bothered me was the absense of the words 'Delhi by Cycle' in big, block letters on the down tubes. Didn't they realize what a great piece of marketing real estate that is? 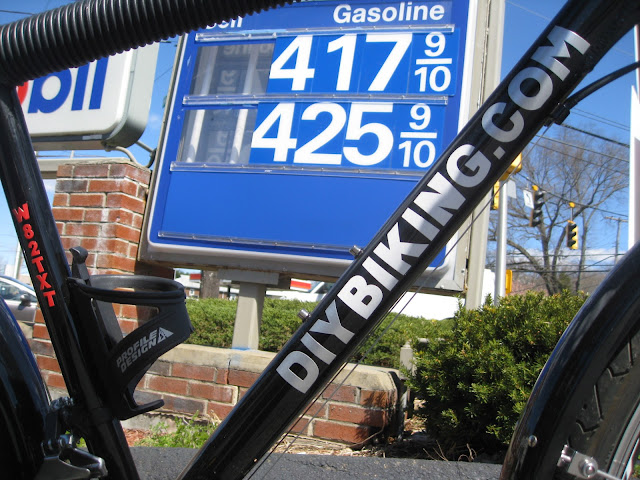 In a few minutes, we were all assembled: the pretty Holland, who was on a six-week vacation far from the Netherlands. The friendly Frankfurt, who was on business from Germany, and a nice couple from the East Coast: Washington and Alexandria, who were in Delhi attending the wedding of a friend. Our group also included a co-guide riding in the back of the group, ostensibly to make sure none of us would fall behind.

Within minutes of setting off, I found appreciation for the 6:30am start time: it wasn't blazingly hot and the streets weren't altogether crowded. At first. 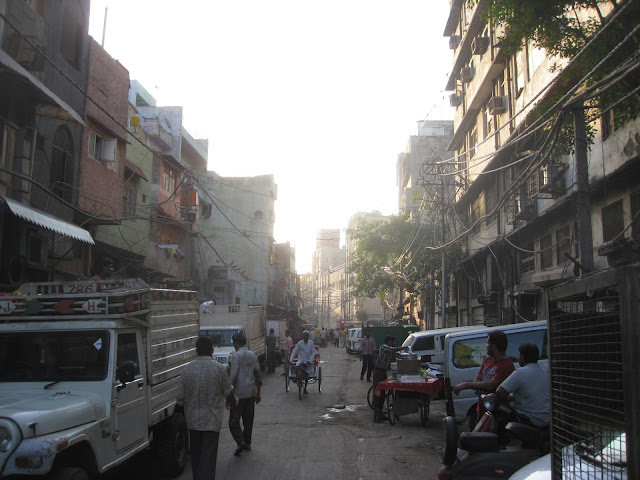 We were encouraged to use our bike bells as frequently as possible and we almost always rode in single file. While I had been assured we would stop from time to time so we could take pictures (we did) I found myself trying to capture everything about Delhi while I was in motion. I also became an expert at pulling my battered, on-its-last-legs Canon PowerShot out of my pocket, turning it on, taking a picture, and putting it back in without endangering myself, the other cyclists, or any of the citizens of Delhi. 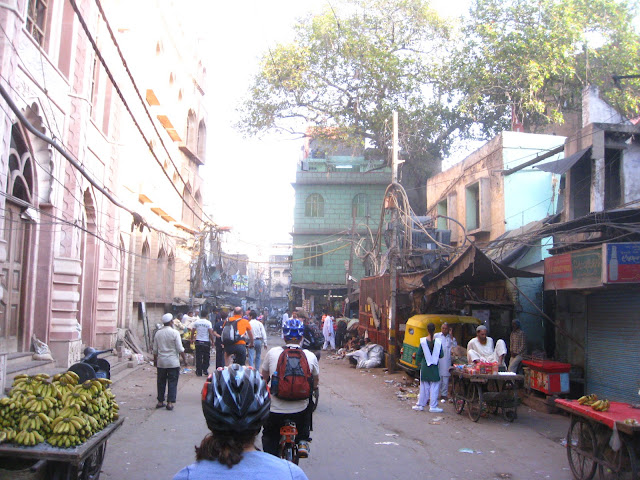 For parts of the trip, it didn't feel as though there were any roads; just empty spaces between buildings that were wide enough to move through. On more than one occasion, things got narrow and I could literally touch the filthy and fascinating buildings – complete with the unusual utility wires that looked like that had been put on the buildings with Silly String containers. 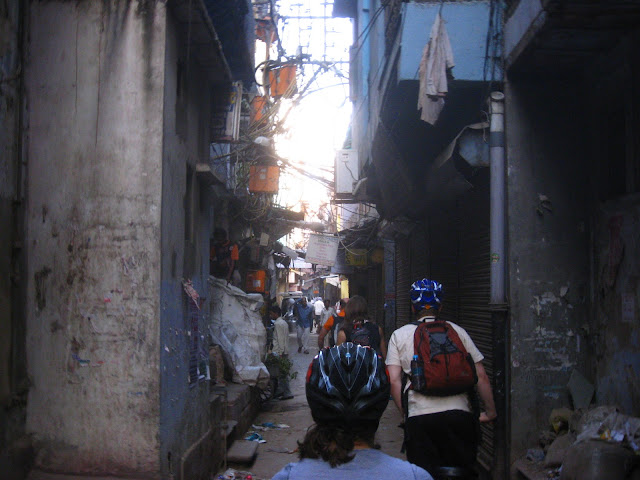 As we approached the spice market, the smells in the air began to change. Depending on where I was and whether I was inhaling or exhaling, I'd smell trash, people, spices, assorted food, and animals. From time to time we'd see livestock such as oxen pulling improvised wagons. 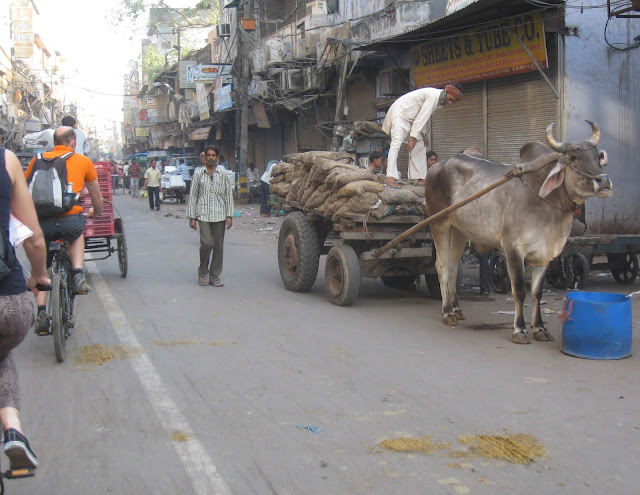 At one point, Bert stopped, parked his bike, and indicated to the rest of us to do the same. He headed into a building and we followed him as he led us on foot through a number of staircases that would give OSHA representatives cardiac arrest. But when we made it to the roof, we had our payoff. 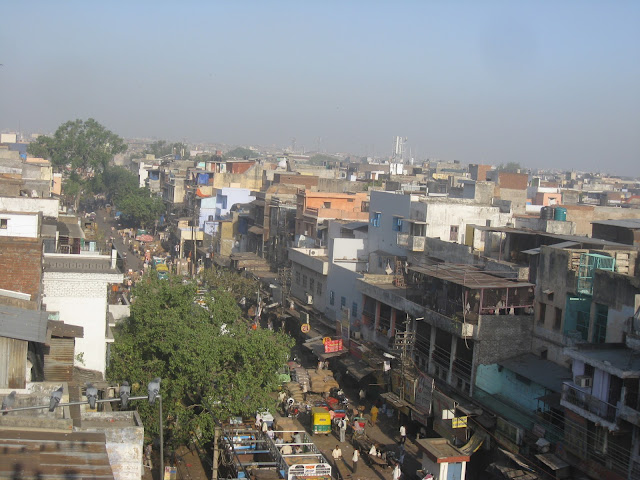 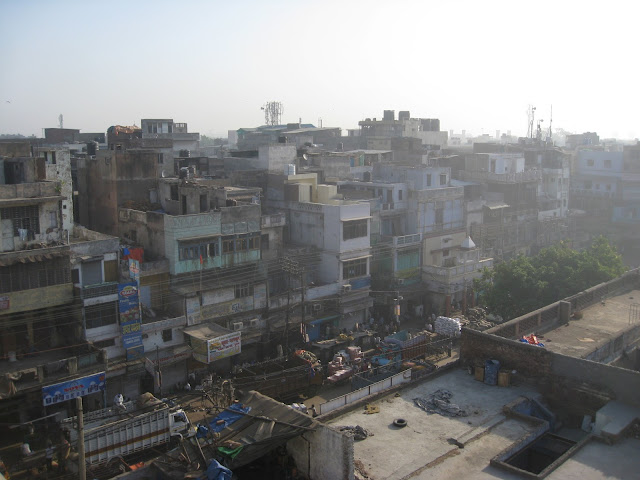 Had Andy Dufresne been up there to hand out beer, it couldn't have been a more surprisingly tranquil morning on the roof.

The sun was higher in the sky by this time, and it was getting warmer. Moments after descending the stairs that may have been used as props in a Wes Craven film, we were back on our bikes and headed away from the spice market. 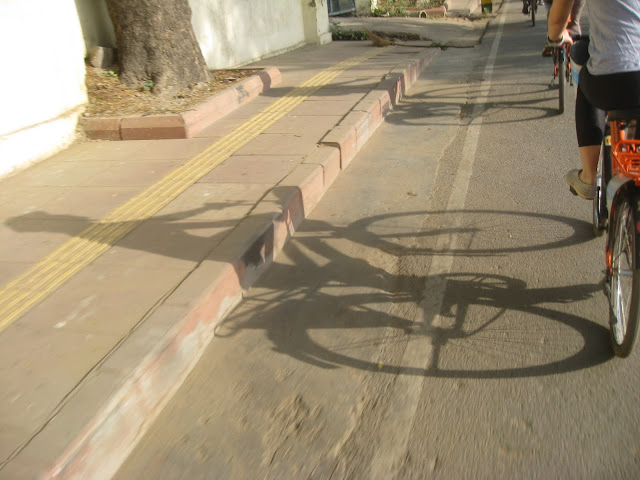 After seeing a few highlights I wasn't fast enough with the Digital Elph Quick Draw, we arrived at Civil Lines, an area the British settled after 1857. Bert, Frankfurt and Washington led the way through the steel gates and into the couryard. 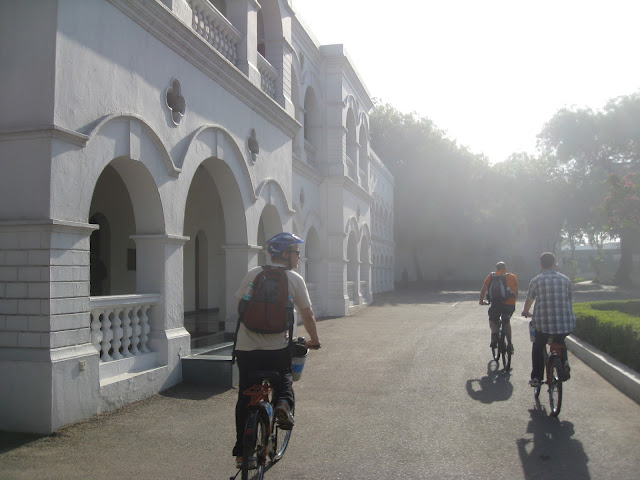 Moments later, we all stopped for a cup of tea. I can't recall the circumstances that led to this discussion, but I ended up being given the chance to...finally...pedal a cycle rickshaw. 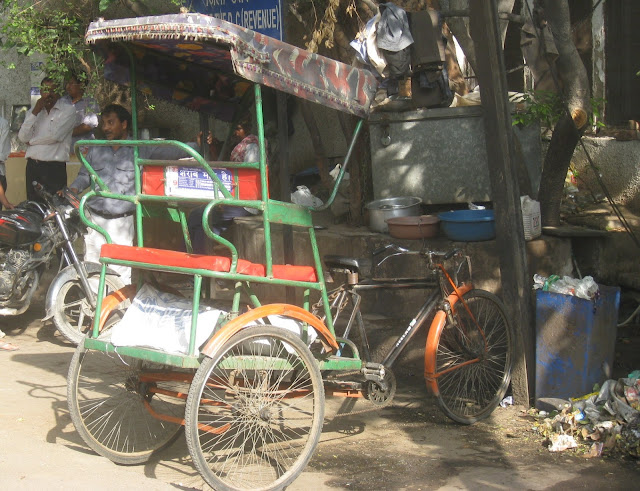 Holland, who was egging me on to try it, ended up being my passenger as I climbed on and mashed the pedals. Moments later, we were around the corner, out of view of the others where Holland and I laughed at the prospect of a self-guided tour before I made (barely) a wide U-turn to return the rickshaw. I couldn't imagine pedalling it with multiple passengers for hours and I was glad I had generously tipped the driver my wife and I hired earlier in our trip.

Washington, Alexandria, and Frankfurt laughed and took cell phone pictures as I brought the rickshaw to a stop and, after I thanked the owner, we all remounted our bikes to continue the tour. 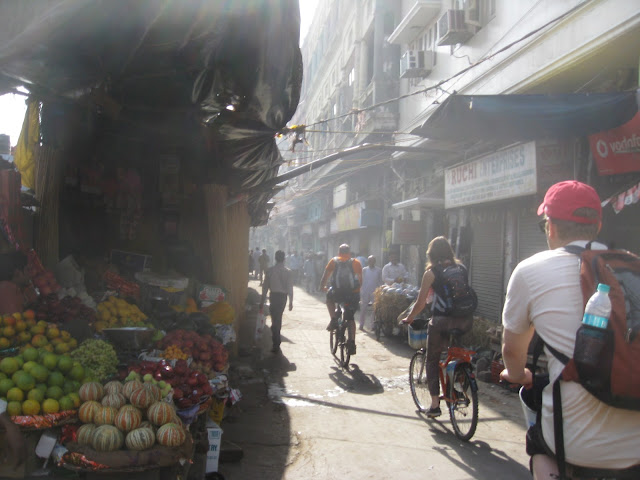 The streets were getting more crowded by this time, but by now I was getting used to dodging unusual vehicles, people and animals. I gave rickshaw drivers an extra wide berth, as well as pedalers who were carrying things that obviously needed to get to where they were going by a certain time. 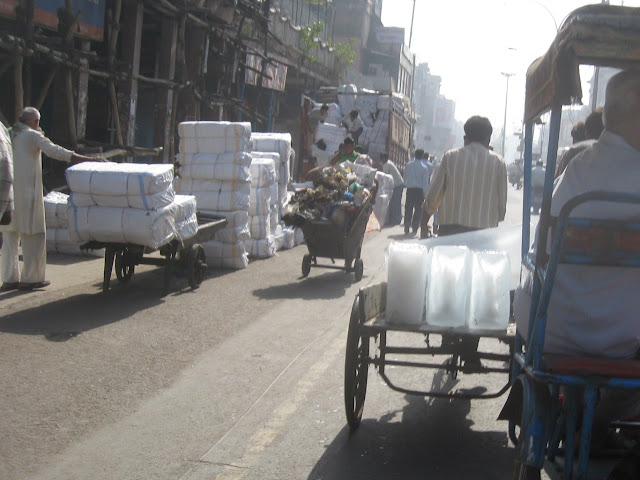 We stayed in a tight group most of the way toward Red Fort, which was built in 1648 and was occupied by the British from 1857 through that August day in 1947 when India became independent. It's now a UNESCO World Heritage site and an impressive tourist attraction. 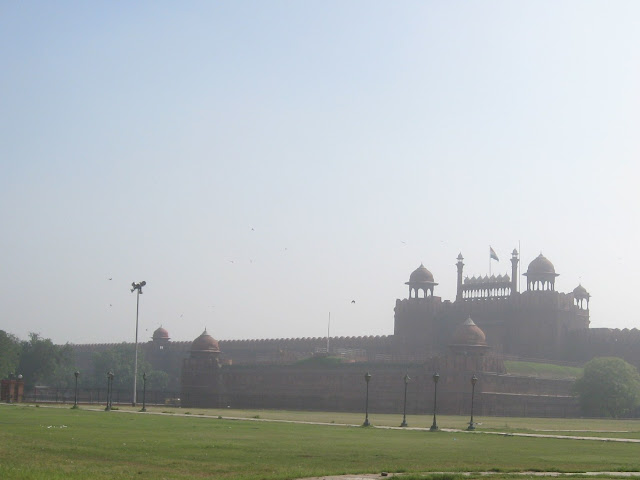 Later on, we stopped at Karim's restaurant, a 99-year-old institution. We snacked on some yellow dal (lentils) and goat in a spicy gravy sauce while we talked about what we had seen so far that day and places we had traveled to. 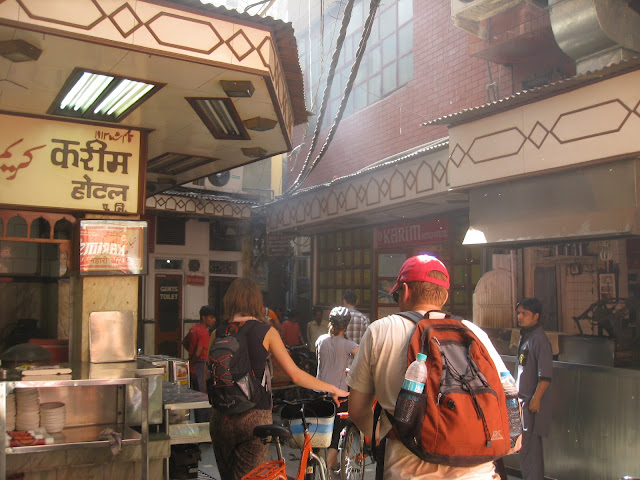 Immediately after leaving Karim's, the most chaotic and unforgettable part of the trip was left: riding through the markets along some increasingly crowded streets. 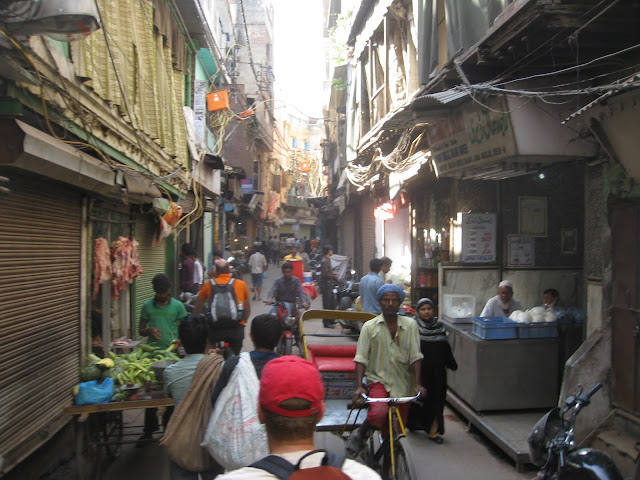 We rang our bells almost constantly as we navigated our way through, trying to dodge everything and everybody Old Delhi was throwing at us. I nearly ran over a sleepy goat while making room for a passing motorcycle. People were carrying things from one storefront to another, and my eyes couldn't keep up with it all. I rarely got my camera out as I was too busy holding on to the handlebars. It wasn't until I got the picture below uploaded that I realized that what was in one of the bowls was brains. 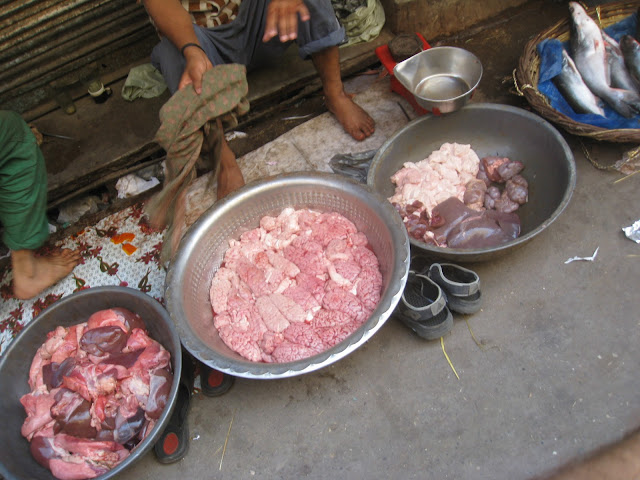 After I put the camera back in my pocket and continued navigating through the craziness, I saw a thin man pull two live, squalwking chickens from a little three-wheeled truck. As casually as he was delivering the mail, he stepped into a nearby shop front that had a crude, bloodstained table in front with severed chicken feet all over the ground. Just inside, leaning agains the wall, was another guy, who looked bored and was holding a knife.

I was passing by too fast to see what happened next, but I don't think it worked out so well for the chickens. Still, I was seeing the markets in all of their glory, and I wasn't going to look at any cellophane-wrapped food in Fairway the same ever again. 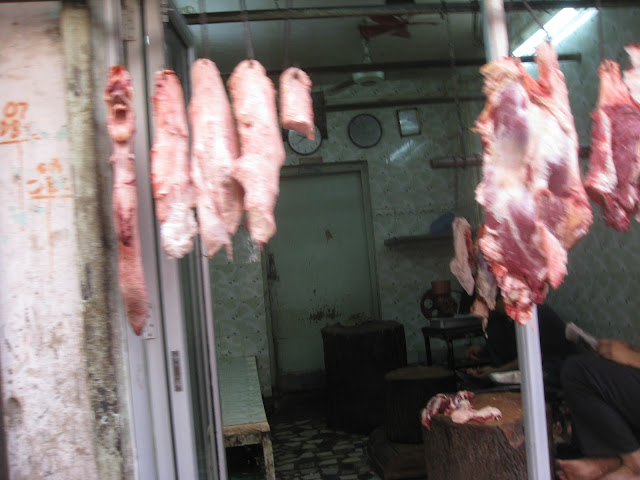 Eventually, we made it out of that fascinating place and back onto the street where we made our way back to the original meeting point, Delite Cinema. 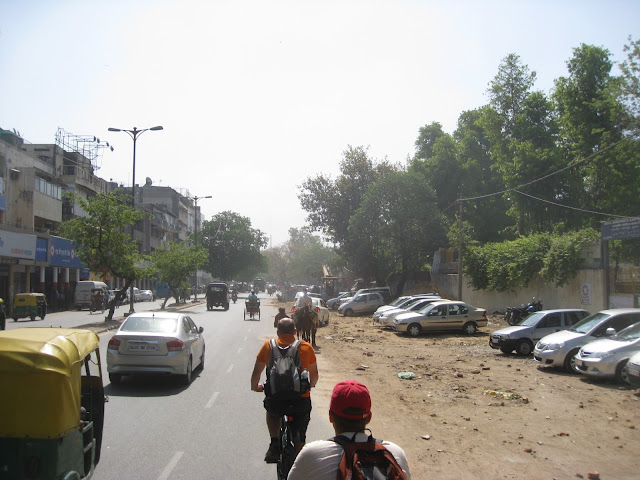 When we all disembarked, I thanked Bert for his outstanding guidance and exhanged pleasant goodbyes with Holland, Washington, Alexandria and Frankfurt. I snagged an auto rickshaw and headed back to the hotel, collected the bags, and took the reasonably-priced car service to Gurgaon.

And I slept the whole way there.

When I awoke, I had arrived at The Leela in Gurgaon, and felt more dazed than I had felt since the trip began. The hotel was enormous and packed with luxury that seemed like such a contrast to what I had seen I felt as though I had landed in yet another time zone. Too exhausted to do much else, I drank a cup of coffee – as it was about six in the morning in Connecticut – before settling in and watching Dual Survival dubbed in Hindi. I couldn't understand it but I'm sure Cody not wearing any shoes was mentioned.

I enjoyed the rest of my stay in India, and even though I missed biking in Old Delhi immediately, I realized that I had ridden a bike in Asia for the very first time. Three continents down, four more to go. Hope you get to do some of them yourself and look up Delhi by Cycle or the equivalent thereof when you get there. Till then, ride on the continent you're with, and thanks for reading. 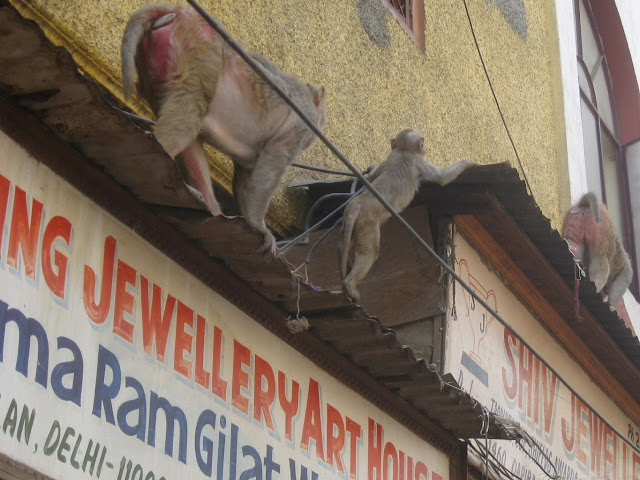