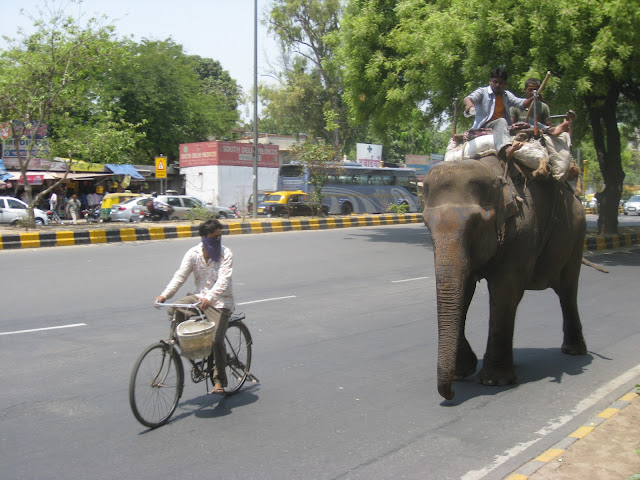 There are some serious and unexpected road hazards to be had in the United States, that's for sure. We have people who use cell phones while driving, people who apply makeup, and one guy in Stamford I saw using a solar powered calculator while behind the wheel of a white pickup (I know it was solar powered because he was tilting it toward the setting sun with one hand while typing on the other. No idea how he was steering).

But from time to time, you have to admit the dangers cyclists have to face here (and the infrastructure on which we face it) do not even come close to some other cities and countries around the world.

It's a long flight from here and nine-and-a-half hours ahead of Eastern Standard Time. So for several days a few weeks back, immediately after my U.K. trip, I was observing cycling from the future. And in the future, they have roads, but there are no lanes, for elephants, bikes, or any other modes of transport. The yellow painted lines on the roads in most places are simply 'suggestions.' 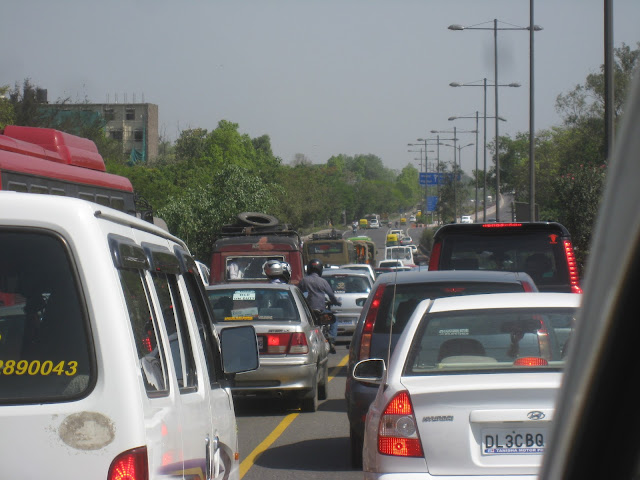 I found myself yearning for I-95 on a Friday night. At least the cars there are organized in neat rows. Whereas here, everywhere I went the traffic functioned like the automotive equivalent of a herd of buffalo stampeding. And the cyclists in India are just as much a part of the flow as everything else. 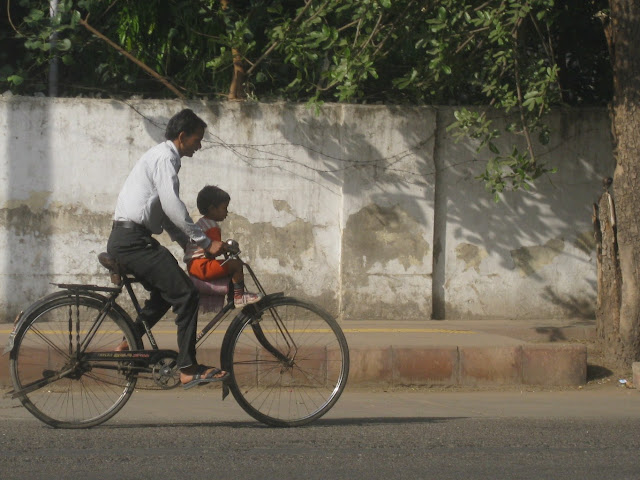 The bikes are different in this part of the world than they are anywhere else I've been. They're heavy. They have kickstands that go down with a loud clang. They don't have springy cable locks; just the ones that loop around the rear wheel that keep people from hopping on the bike and taking off (an innovation I wish I had last summer). Only once did I see a bike that was chained to something, and since there wasn't anyone around, I took a few moments to take a closer look. 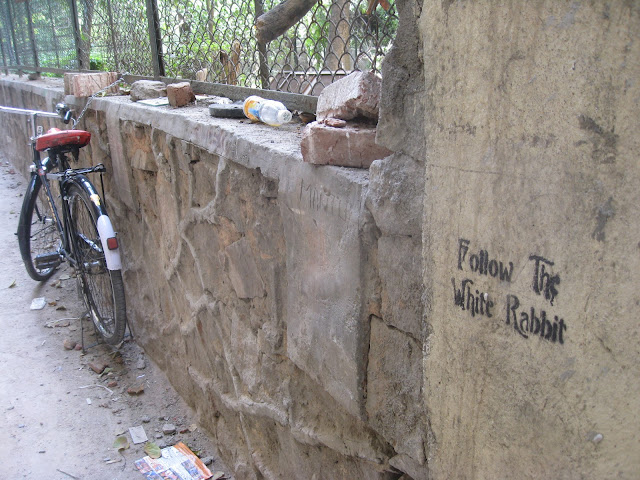 One thing that is particularly noteworthy about the Avon Classic (which is the brand of this bike) as well as most other bikes I saw is there are no shift or brake cables. There are brakes and you do activate them via hand levers, but all along the frames are a series of metal rods. It's part of what makes the bike heavy but...wait for it...there's never a problem with cable stretch and I imagine they're quite reliable. 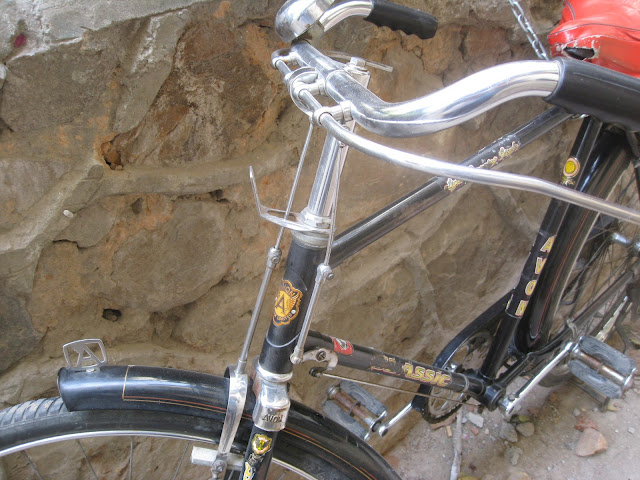 Only a few paces later I saw another unattended bike, this one from Hero Cycles Ltd. and it too resembled most of two-wheeled bikes in Delhi: battered, black, brilliantly made, a rear rack that could hold just about anything and a seat that has got to be introduced into the U.S. market soon. 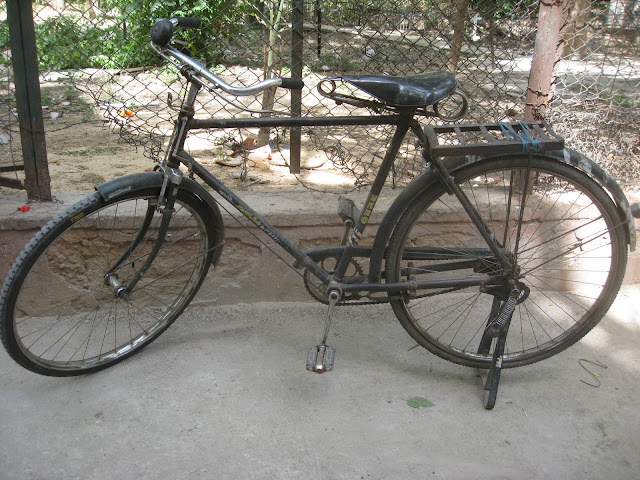 The people of Delhi also appear to think differently about riding bikes than we do. They don't ride because it is environmentally friendly or to stay in shape. They ride because it is necessary to move from one place to another in order to make life work, and in some cases, to make a living. 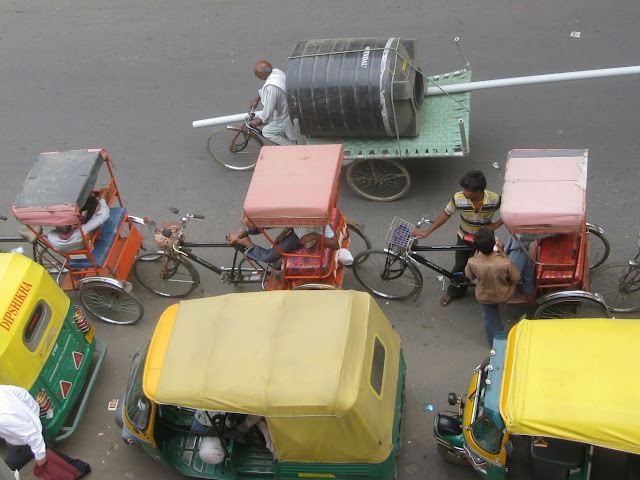 What you see in the photo above are two popular ways to move around Delhi: you can pay an auto rickshaw driver (the yellow three-wheeled motorized things that look like the offspring of a VW Microbus and a Vespa scooter) or a cycle rickshaw. My wife and I used both, depending on the circumstances. Often, we could get somewhere in fine, unseatbelted comfort for less than a couple of U.S. dollars. When approached by multiple drivers or pedalers, we'd often name a figure and either negotiate or hop in the back. Often I was tempted to offer the pedaler more if he'd let me pedal the rickshaw myself, but my wife talked me out of it every time. However, I did unlock a great secret of India while I was there: an auto rickshaw's top speed is in excess of 37.4 miles per hour (the things we learn when palming a Garmin bike GPS).

Eagle-eyed observers of the photo above will notice a man hammering the pedals of a trike to deliver a large black tank of some kind. Aside from heavy tourists, it wasn't the heaviest or the strangest thing I saw on a trike in India. 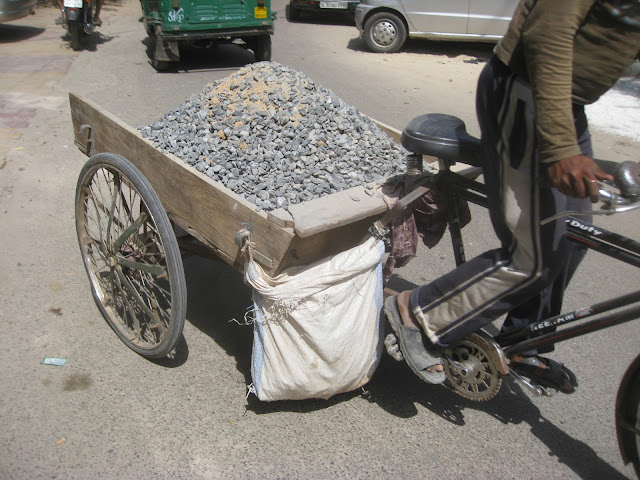 He was barely moving, but I could tell by the look on his face that the amount of money he wanted to have in his pocket by the end of the day depended on his chain holding together. As far as I know, it did as it wound its way through the crank, which, like the Atlas and other bikes I saw, has the brand name actually cut into the crank. It's great marketing. I don't know why Specialized doesn't do it. Maybe they have too many letters. 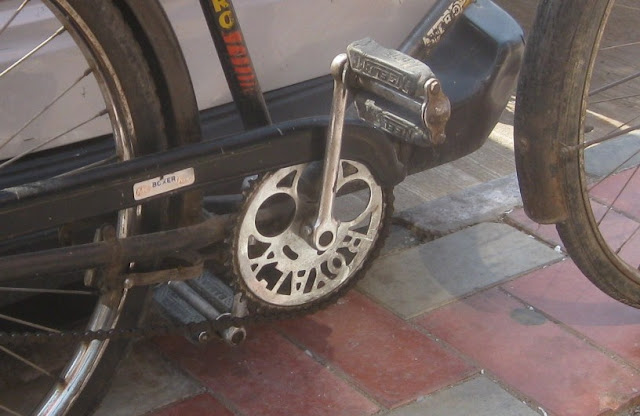 People haul baskets, children, and all kinds of things that, when they are delivered in this country, require a truck half a block long. When you wonder why it isn't done in India, you have to remember that pedal-powered vehicles are the most a lot of its citizens can afford...and the roads of Delhi just can't handle too many more large vehicles. 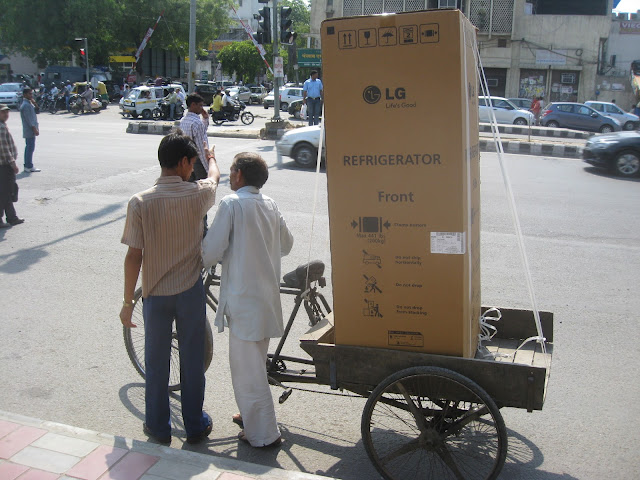 Yes, the steel reinforced rear wheels was a common sight on some of these trikes.

One of the things I wanted to do in India (and something I love doing no matter where I travel) is visit bike shops. I was especially interested in buying a souvenir that I couldn't find anywhere else.

Here's something I learned while walking around in 90+ degree heat looking for bike shops in India: they aren't like the ones in the U.S. 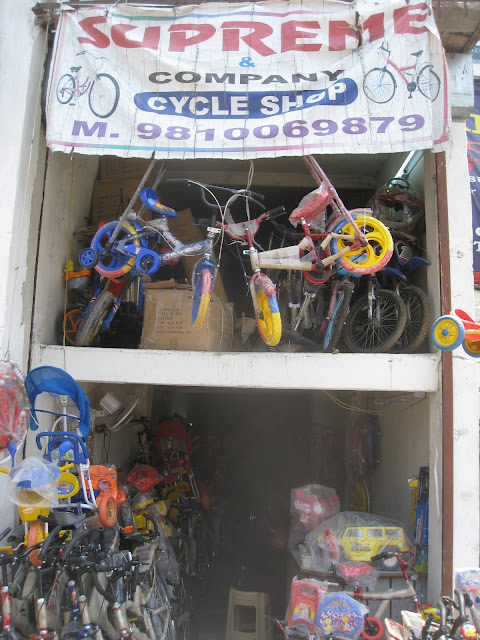 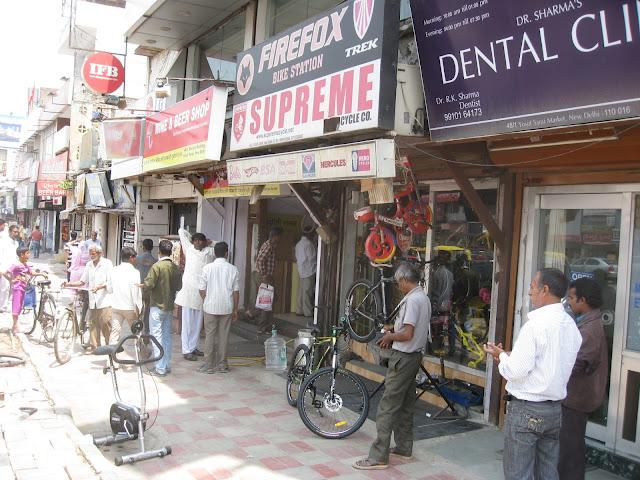 Eventually, I found a bike repair shop that was just my style. I don't think this shop has a name. Only tools, parts, and one guy to wield them both. I remembered the part in Robert Penn's It's All About the Bike when he used a mechanic in India to fix his badly damaged frame, and I wondered if it was a place like this. 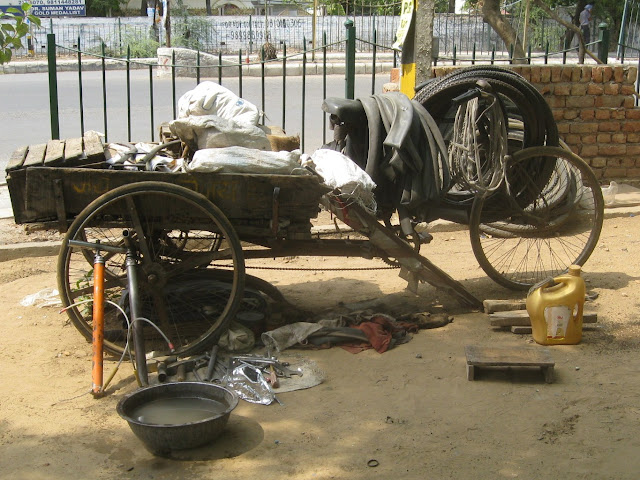 I didn't learn any key Hindi phrases before leaving the U.S. (i.e., 'where can I buy a bike?' or 'how much is that bike?' or 'can you direct me to your inventory of tools and seatpost bags for sale?') so I wasn't able to communicate with this shop's owner. I had better luck later when I came upon a shop that sold parts and had a great selection of merchandise. 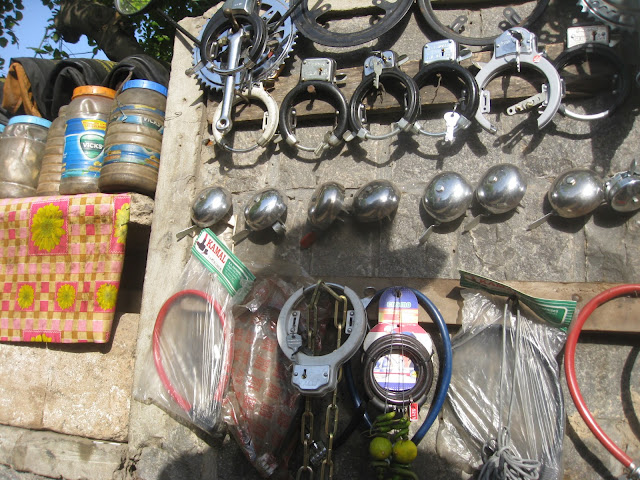 After looking around at the bells and the locks and the other things, I knew there was only one souvinir that would do. My wife thought I was nuts that I wanted to put so much extra weight into my suitcase, but I paid 150 Rupees (about $3.00 U.S.) for the Royal-X crank (and arm; you can see it on the upper left side of the photo). I looked as though I was carrying a deadly weapon the way back to the hotel, but I had a cool cycling souvenir from Delhi, and it was fantastic.

That night, I put it away...and began to get excited about the next morning, when I'd get to do the thing I had wanted to do since I got off the plane: ride a bike through Old Delhi. 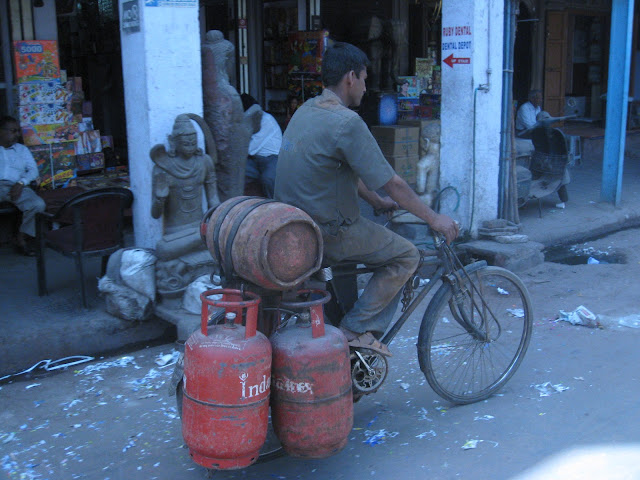