Building An (Even) Better Bike Box

So I was at the recycling center the other day, and just outside of the Metal Only bin was a complete mountain bike.

And I didn't take it home. It wasn't interesting enough for a Saved from the Scrapheap post. Besides, when I peeked into the bin I saw something even better. But since there wasn't a lot in the bin and it was down at the bottom, the item was out of reach.

But I just had to have it. Improvising, I took a bungee cord from my car and hooked it on the third try. Indiana Jones would have been proud embarrassed. 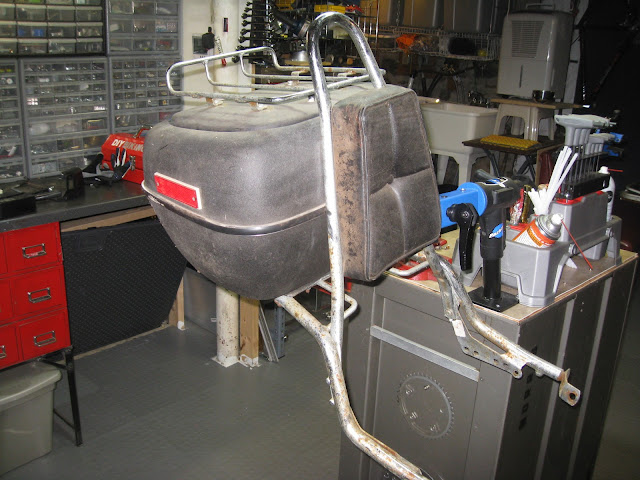 This, as choosy motorcycle riders among you will know, is a Perry Scott cargo box. It looked as though it had seen a lot of miles– and possibly an accident of some kind given the scuff marks. No matter what, I want to believe someone filled the box with a Hefty bag filled with clothes and rode from Connecticut to Sturgis and back again. 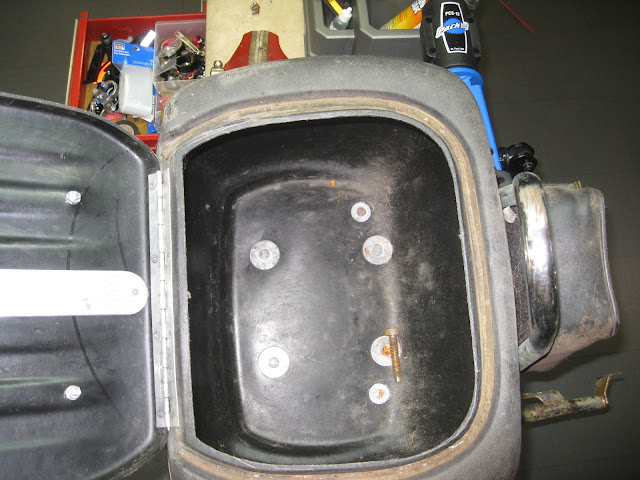 I'd also like to believe the motorcycle it was sitting on it still in use today. The rest of it wasn't in the Metal Only bin (I wouldn't have tried to lasso it if it was).

Naturally, I thought this would look good on the back of a bicycle. But not just any bicycle. It would have to go on the Ruler of the Island of Misfit Toys: the 30-year-old recumbent. Not only would the Perry Scott box look interesting on the bike, but because of the rider position, it would be the only bike such a box could go on that wouldn't affect the drag coefficient (much). 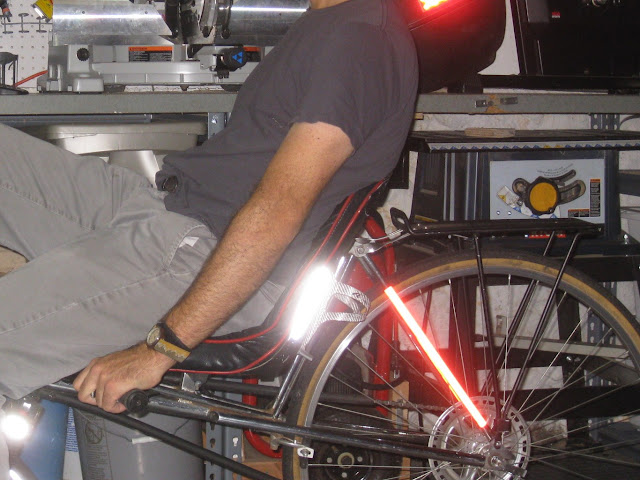 After I took the picture of myself on the recumbent, I fully realized just how high my back and shoulders rise from the back of the seat, and there would be plenty of room for the Perry Scott box.

But I was first faced with two problems. The first one involved taking it off the metal frame it was mounted on, and that involved using spanners on rusty bolts that would shriek when finally loosened. While it was clamped in the jaws of the PCS-12, I realized that whatever motorcycle this had come from this had been sitting somewhere for quite a while. Not only was there an abandoned bee starter home on the metal frame, but when I got the last bolt off a stowaway jumped out and made a dash to the furnace for its freedom. 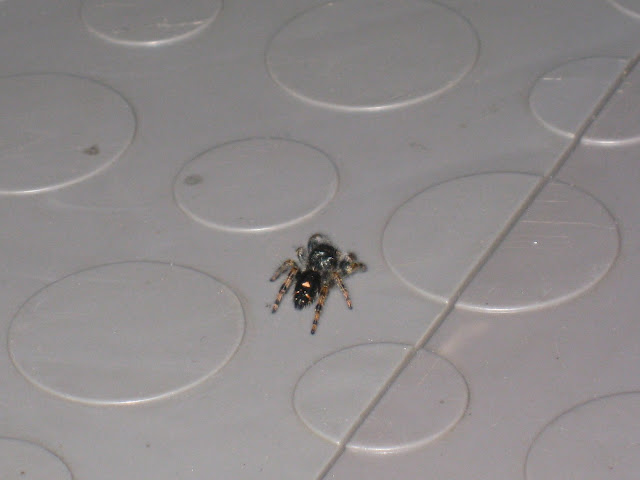 It was definitely feeling like I had gotten something for free at the recycling center – and that was fine by me.

When I got the box off, I placed it on the workbench and was slightly dismayed at the heavy weight. It is good quality plastic, after all. Even though I really liked the asthetics of the top rack, I reluctantly removed it to make the box lighter. 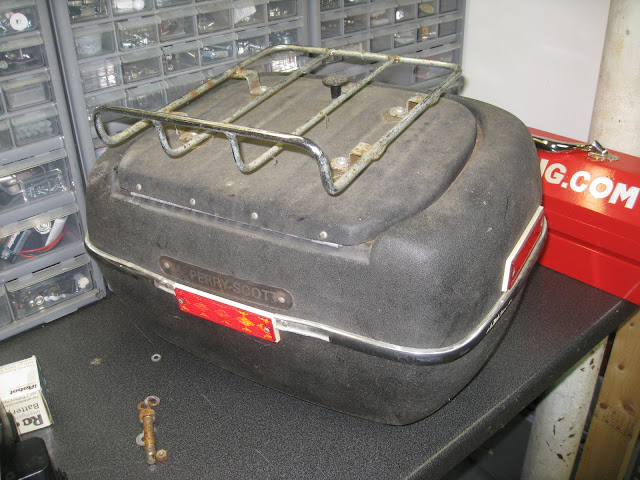 Once I removed the rack, I held the box and determined that yes, it was still heavy; far heavier than my other cargo boxes, but I was still interested in the extra trunk space. 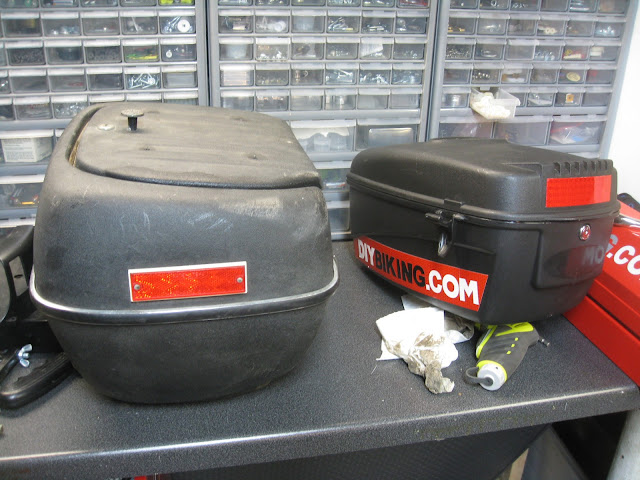 After I gave it a good cleaning, I faced the second problem, which was the lock on the lid of the rack was open and missing the key. Unlike the professional bike cargo boxes and the better bike box I made last year, there was no other latch mechanism. It would surely pop open while riding, and it would look as though I was carrying a toilet on my back with the seat up.

As it turned out, it was an easy fix: I went to Keough's hardware store on High Ridge Road and an employee there led me straight to what I needed to replace the lock. I picked up a couple of other things too so I could properly finish the build. 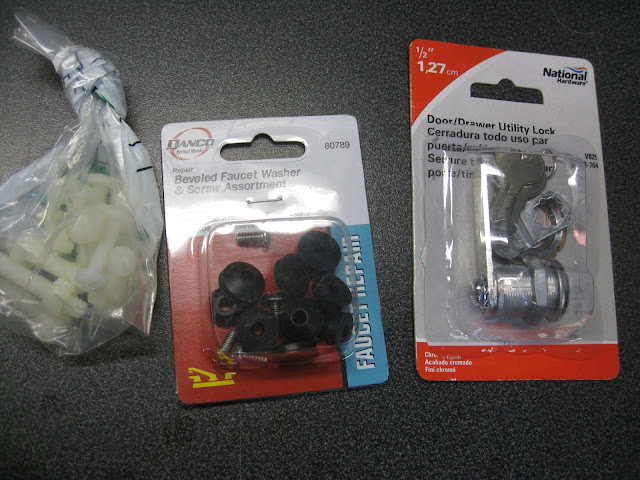 I left Keough's with plastic bolts, some rubber washers from the plumbing section, and a six dollar lock mechanism. After I removed the old lock I did have to file the opening a little to make the new one fit, but once I did, it worked perfectly. 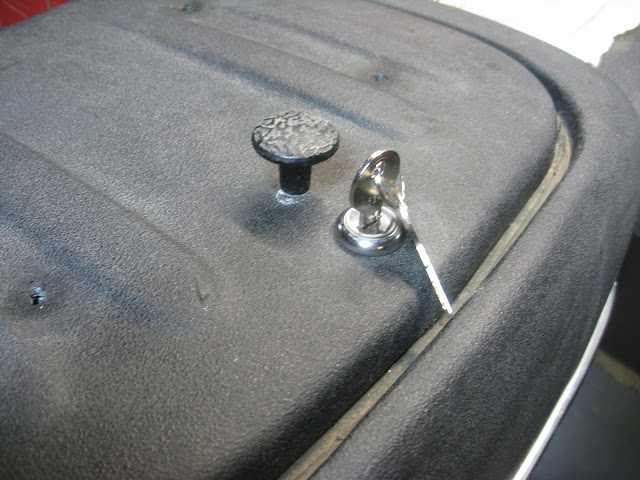 I was left with the stock knob at the top and I thought I'd replace that too, so I rummaged through a small collection of knobs stored in the 304 and tried my options, feeling as though I was shopping for kitchen cabinets. 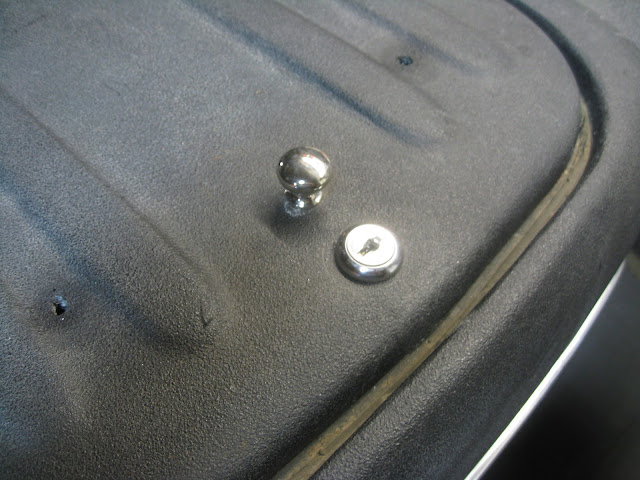 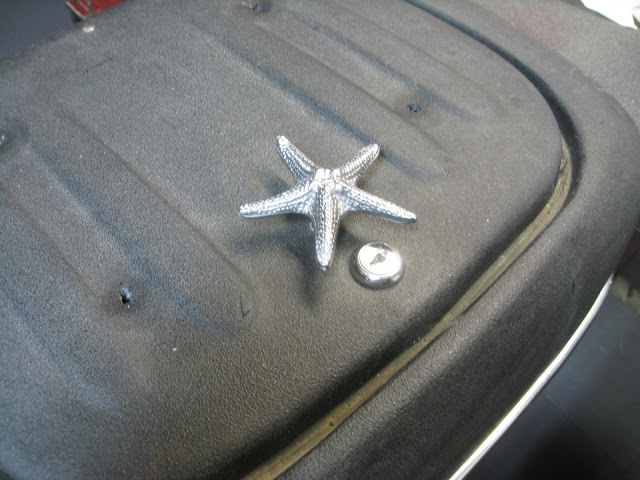 I ended up staying with the stock knob. After I put it back on, I assembled my plastic bolts and rubber washers in the four holes at the top (the result of removing the top rack) to keep the rain out. I then very carefully centered it on the bike rack and drilled the proper holes in the bottom for the mounting hardware, which I borrowed from the better bike box.

When I was done, I couldn't believe how good it looked and how much cargo space I had that I didn't have before. I then spent several amusing minutes putting things in the box just to see what would fit. It's the bike box equivalent of a clown car from the Ringling Brother's circus. It truly is. 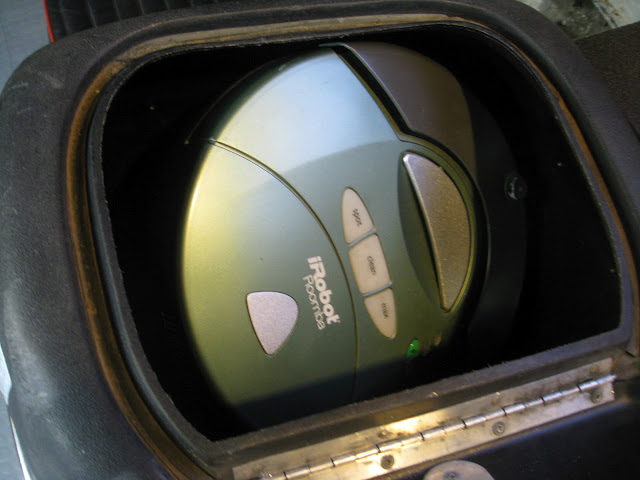 So far, I have taken the converted Perry Scott box more than 60 miles in a few days time. The bike seems to get even more attention; at a tag sale, a curious old man walked up to where I had leaned it and opened up the cargo box (which reminded me to keep it locked when I wasn't near it). I can also fit two bags of groceries in the back and any number of random tag sale finds.

So if you come across a Perry Scott box and you have a cool bike to put it on, do it: it's worth the extra weight and makes the bike – and biking – stand out. Thanks for reading. 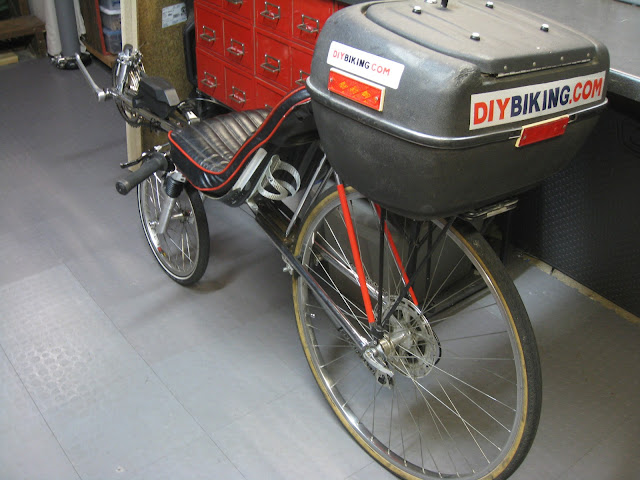