Riding in Manhattan with a Suit and Tie 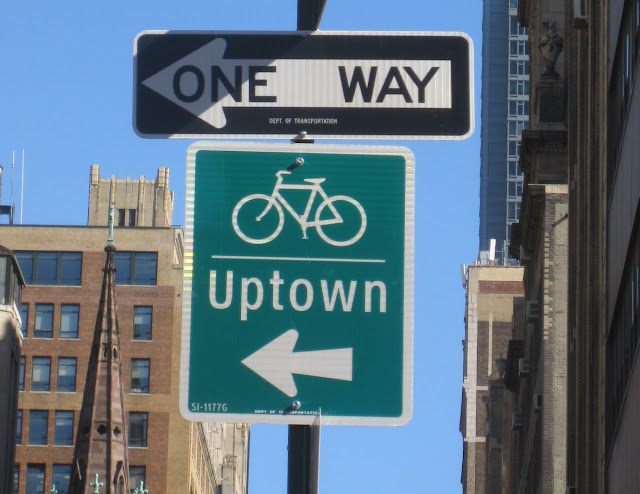 So I had to go to Manhattan the other day to do grown-up stuff. It meant I had to wear a suit and tie.


I was also faced with having to go from Grand Central Terminal to the Financial District for Meeting A. Later, I needed to go to the west side for Meeting B, not far from the Intrepid Museum. Finally, hours later, I had Meeting C, which was to take place about forty blocks south from Grand Central Terminal. Then I wanted to cap off the day by having dinner with a friend in Soho.

I decided to do something that I had never done but had always wanted to do: take a bike into the city and do it all without the hassle and expense of gas, parking garage fees, subways, buses or taxicabs.

But I worried I was opening myself up to all new hassles. I needed to bring a folding bike because there was no way around Metro North's no-bikes-on-at-peak-hours rule. Ideally, I'd bring a Brompton and just fold it up and carry it inside, but I don't have a Brompton. I could have done that with the South Norwalk bike, but it would be like wearing filthy jeans to the opera. You just don't do it.

The Dahon Matrix was the bike to take. Rugged, dependable, easily lockable, and comfortable to ride without padded shorts.

However, I needed to make some adjustments before its grand day out: First, I took off the rear rack and bike box. Next, I secured the Cane Creek Thudbuster to the frame with a Knog lock to discourage theft. Then I added some highly reflective tape to the rear fender to discourage cabs from running me over in the dark.

I then added three other necessities.

Going left to right: The essential Kryptonite lock I bought more than four years ago but I can count the number of times I've used it on one finger – it is a special occasion lock, after all. Next is a Serfas USB powered blinking bike light I could fit in my jacket pocket and fasten to the handlebars at sundown. Finally, the Reisenthel Airbelt shoulder bag my wife bought me over the summer. That really is an airplane seatbelt used as a buckle. I like it because the next time I fly I can help with the safety lecture.

I also picked out a suit that was a dark color to hide grease stains (should I acquire any). Also, remembering what I learned when I visited the Brompton factory and saw their Oratory jacket, I picked a suit that had a jacket roomy in the shoulders so I wouldn't stretch or split it when leaning forward for handlebars.

Also, I brought my helmet with the little rearview mirror. Protecting the skull always pulls rank over good hair.

The day started easily: it was a cool autumn day so I didn't have to worry too much about sweat as I pedaled off to the station. The next good piece of luck came when I discovered my train was one of the nice, new ones. 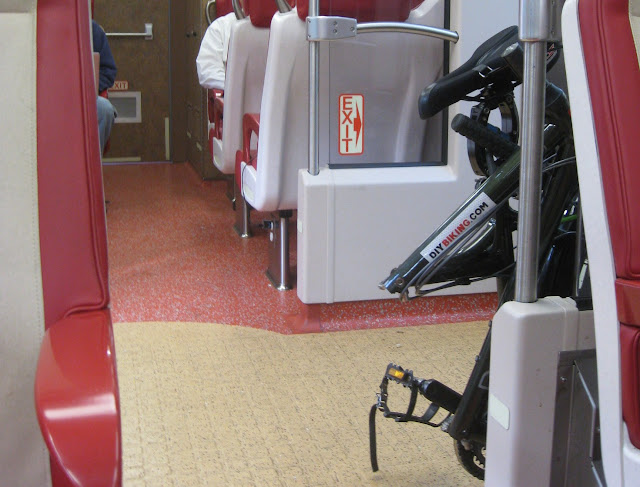 There was also an open seat, so I sat down. Since I was right next to a very professional-looking woman, I carefully checked her reaction. She didn't recoil at any odor I had, real or imagined, so I figured so far so good.

When the train arrived, I waited until my car had emptied before taking my bike from the station. It was just after rush hour and I thought I'd easily make it to my first meeting.

I wasn't prepared for a couple of things. Bike lanes would appear and disappear frequently, and to my dismay I discovered that pedestrians seem to enjoy stepping into traffic with a cell phone to their ear. Even my Incredibell was powerless to penetrate their shell of Personal Haze.

But I really, really enjoyed biking to the first meeting. Wind going through the jacket, blowing the tie over my shoulder, it all seemed to work. Not only that, but I made it to where I was going and was confident enough to lock the Dahon with the NYC Level One configuration: 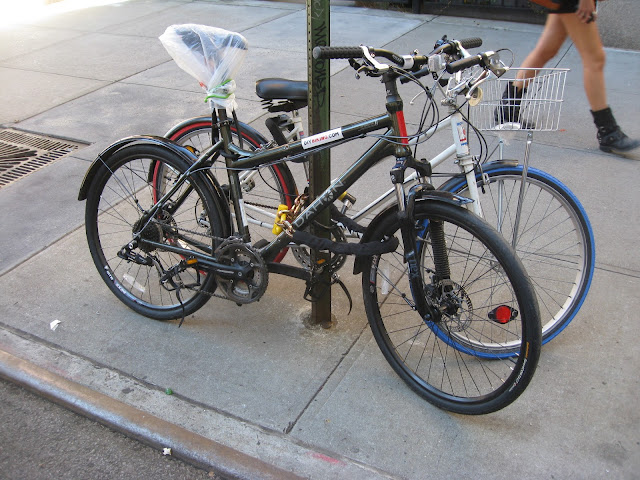 So the plastic bag used to keep the lock in my shoulder bag was used to cover the seat (and hide the seatpost), and the Special Occasion lock was threaded through the frame and the front wheel. I didn't lock the rear wheel or remove the seat. I was satisfied. The bike next to mine looked safe enough, even though it included an ominous warning. 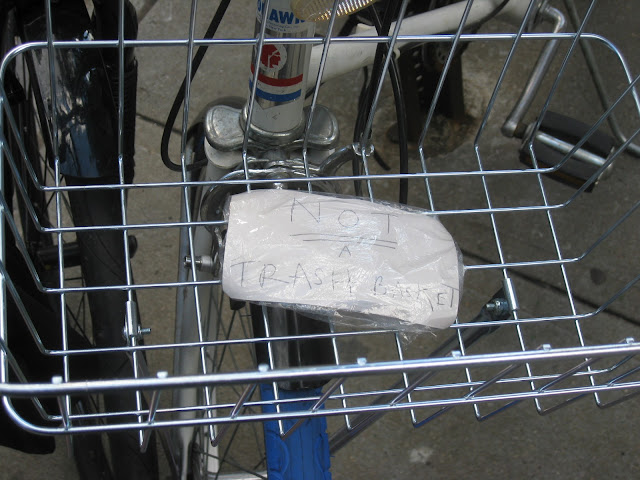 I guess that's the thing with bikes that blend into the city landscape (at one point in the day I had to reprimand a fellow who was leaning on the Dahon and nearly about to sit on the top tube while he was talking to a friend. Occupational hazard for city bikes, I suppose).

With my helmet stowed in my bag, my hair somewhat in place and my body oder not repelling anyone (that I noticed), I transformed into a grown-up and attended the grown-up meeting.

Nearly an hour and a half later, I left Meeting A and headed outside. The bike was still there so I began riding it north. On the way, I got hungry, and at a red light I noticed I was next to the Soho location of Dos Caminos. I dismounted and walked to the sidewalk before the light turned green – thankful that the bike had given me some flexibility to stop anywhere.

But, as is sometimes the case in most cities, I didn't have the flexibility to park the bike anywhere. I ended up asking the hostess of Dos Caminos permission to chain the bike to the railing. Thankfully, my permission was granted. 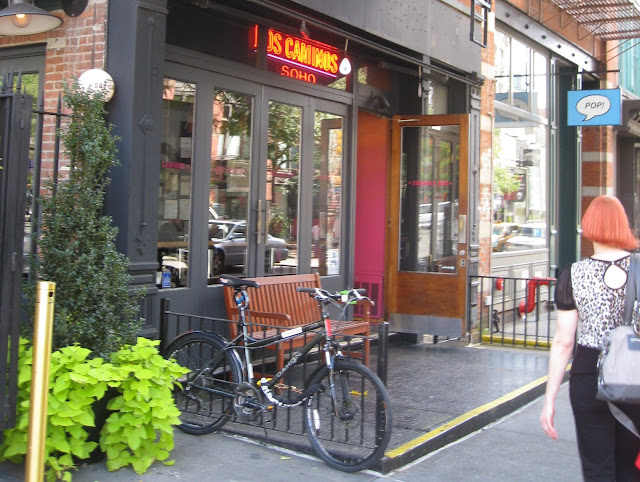 The Soho location has a nice bar seat area that allows one to people-watch while eating. 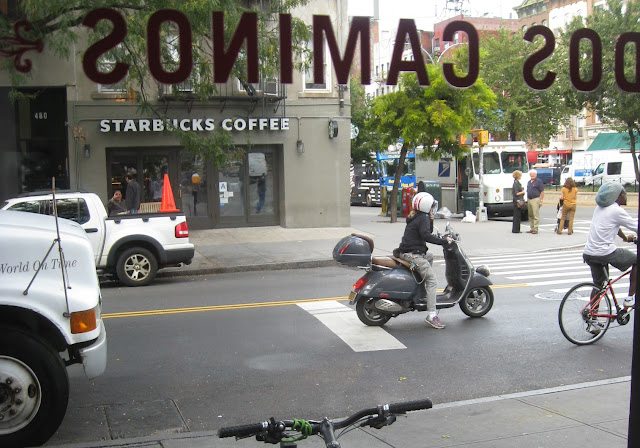 After lunch, I again thanked the hostess for allowing me to park my bike at the railing and I headed off to my next meeting. This time I was greeted by a rack put in place by the 34th Street Partnership. I again used the NYC Level One configuration to lock the Dahon. 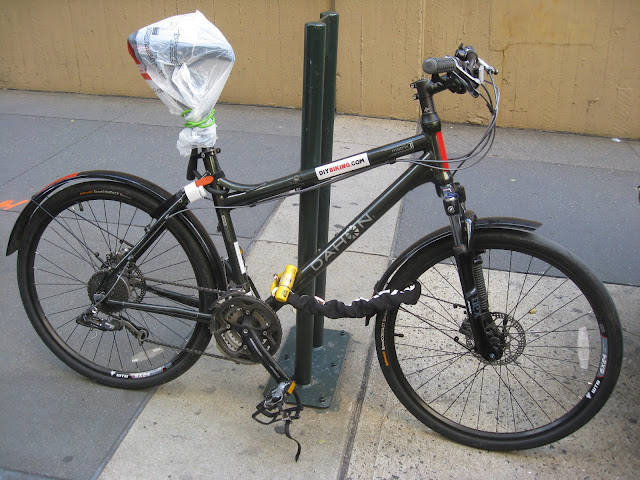 After Meeting B, I was faced with a few hours before Meeting C. So I went to another one of the great public spaces in Manhattan: the High Line. Made from an old elevated freight train line, this park, maintained by Friends on the High Line, is a work of art. Since bikes aren't allowed on it, I locked up under one of the entrances. 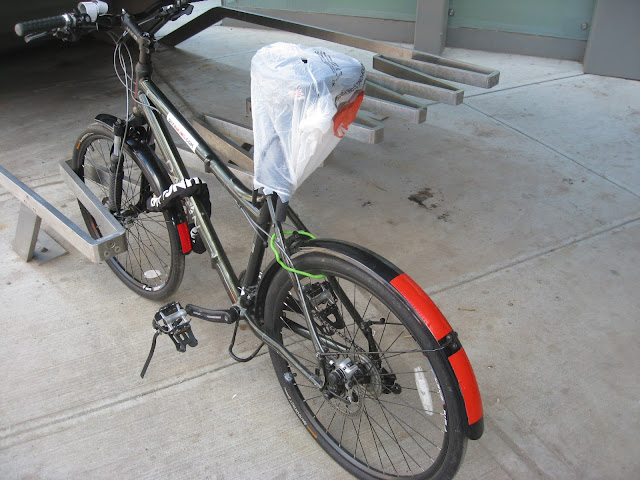 I then headed up the stairs to the park, and alternatively sat and took a stroll. 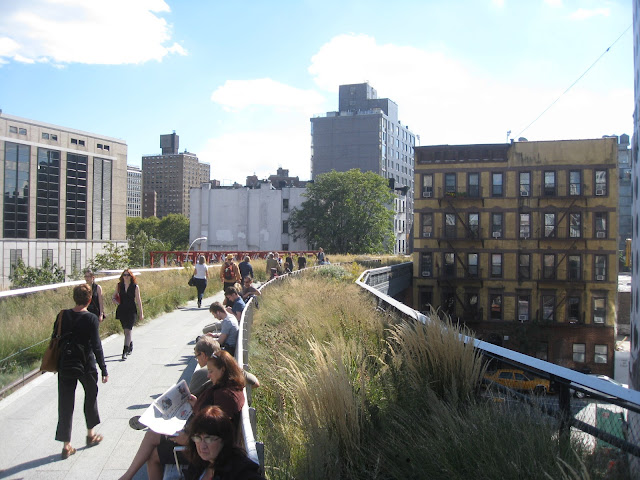 After some Zen-like time on the High Line, I headed to my final meeting. I was quickly reminded at how much of a preferable mode of transportation a bike in New York City can be. 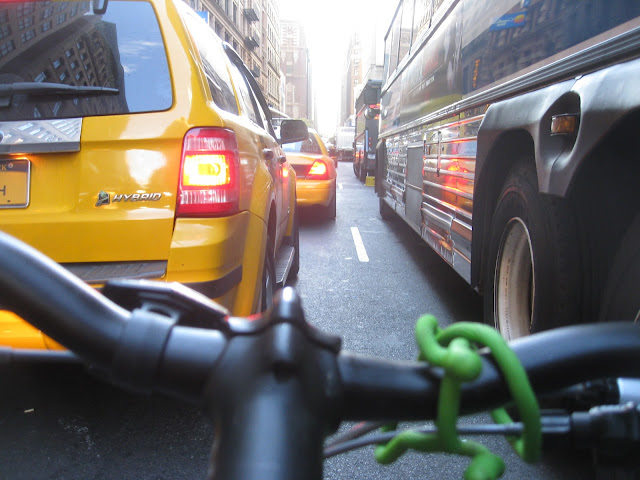 Since the bike was to be locked up as day would turn into night, I decided to lock it with NYC Level 2 configuration: removing the front wheel and threading the Kryptonite lock all the way through. 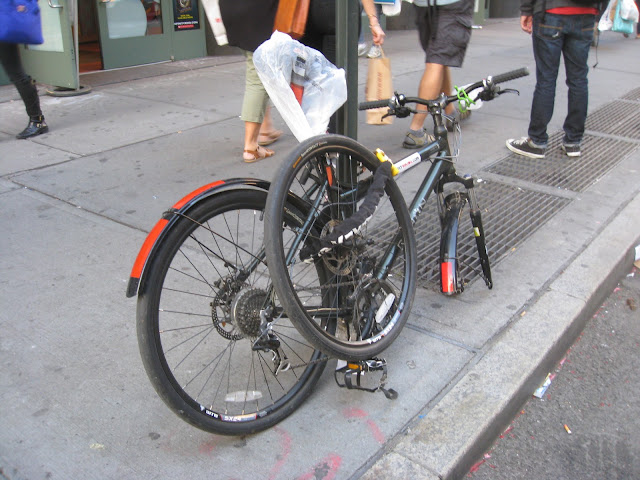 The bike stayed safe through sunset, and before long the workday was over and I was ready to have dinner with my friend. When we said goodbye, I unlocked the bike, put it back together and attached the Serfas light to the handelbars. I kept the cars in sight with the helmet rearview mirror. Cabs would sometimes pass very close, but in the city, it happens. I even had a fairly comfortable ride up Park Avenue, the same street Will Smith drove his Mustang in 'I am Legend.' 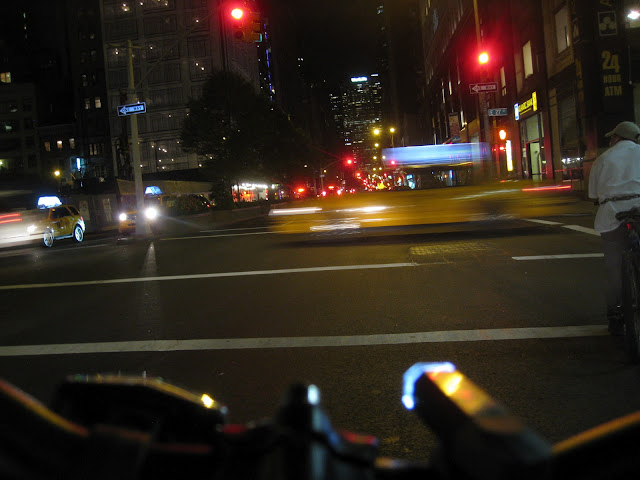 I made it to Grand Central Terminal just in time to make the 9:07 train back to Stamford. There was plenty of room on the train so there was no need to fold the bike in the vestibule. After the 44 minute train trip it was a simple 1.7 mile ride back home, and the Serfas light still had plenty of power to make me seen. The day was a complete success. I made it everywhere I wanted to go, saved money on parking and transport, and I got to see more than I ever could have seen out the window of a cab or a subway. I didn't stink, and most importantly, I enjoyed myself. It made me hope others would consider biking on a weekday: with a special occasion lock and a good bike, there is little in NYC that can't be done. Thanks for reading. 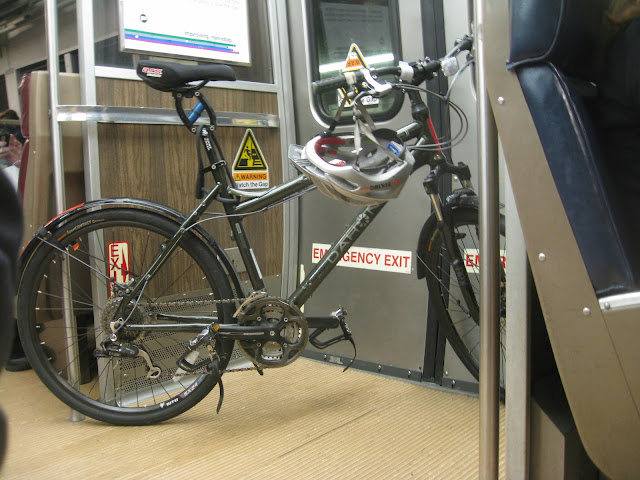