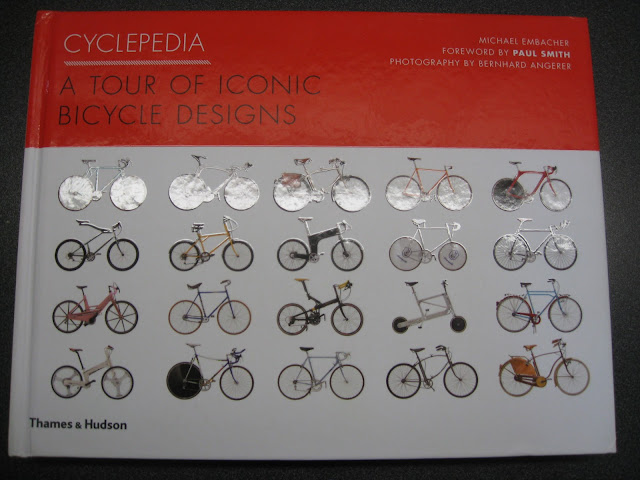 This isn't just any book; this is the one that renewed my faith in publishing.

A year and a half ago, I was in London doing assorted Grown-Up Things when I stumbled across a large advertisement that was simply various and imaginatively designed bicycles set on a black background. It literally stopped me in my tracks and I quickly learned the book was called Cyclepedia, and it was by Michael Embacher and published by Thames & Hudson.

At the time, I knew absolutely nothing about the book, the publisher or the author. I didn't know how much it cost. I didn't know what it looked like. I didn't even know if it was available in the U.S. (as it turned it, it wasn't at the time). All I knew was that I wasn't going to leave London without it. I dropped what I was doing, located a copy of the book and bought one without asking how much it cost first. I then had to carry this big, heavy book around with me the whole rest of the day and cram it into my suitcase at the end of my trip.

That's the thing about books. It's not about the cost or the convenience, but whether the book triggers such an emotional response in the consumer that they don't give a rat's armpit about either of those things.

I quickly found I enjoyed simply thumbing lazily through Cyclepedia.The book also has practical uses: one day when I found a bizarre-looking bike at a store in Hudson, New York, I went home and looked it up. Long story short: if you ever see an Alenax, you'll know. The picture I took came out badly. The photos in Cyclepedia, taken by Bernhard Angerer, do that and every other bike some serious justice.

Just by itself, the book is inspiring. Cyclepedia even inspired me to spend a few hours in the welding room to see what original design I could come up with.

I had a lot of raw materials in the form of Saved from the Scrapheap bikes.  The rusty blue Raleigh Sports, which hailed from England and had already been immortalized by framing the crank in a shadow box, was taken off the Wall of Frame and met its end with my Ryobi reciprocating saw. A green Peugeot I got for free at a tag sale couldn't be remotely fixed (probably why the guy gave it away) was also quickly sawed into bits. The silver Fuji Espree had lost its handlebars with the dried-booger finish and was also added. A trashed purple mountain bike frame from China joined the mix, and a green made in the USA Columbia frame, possibly from the late 1960s, was picked up for $5 at another tag sale.

Five bike frames total from five countries, and I decided that for what I wanted to make I needed only the top tubes, seat tubes, and down tubes. Ten tubes all, and I used my metal chop saw to cut them to the right lengths since it was far faster and more precise than the reciprocating saw. I even built a special rig to make sure four pieces would be cut the exact same length, and wore my Dexter Morgan face mask to shield my eyes from sparks. 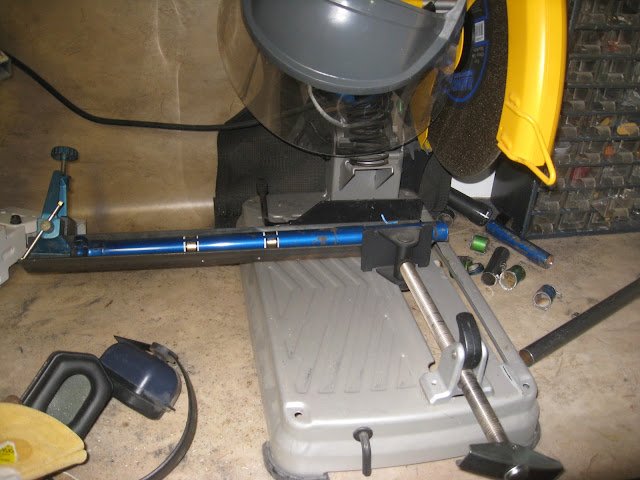 I've learned the hard way that metal, especially stuff that's been painted, needs to be extremely clean in order for welds to hold. So I used a Dremel rotary tool to clean the burrs on the inside of the tubes... 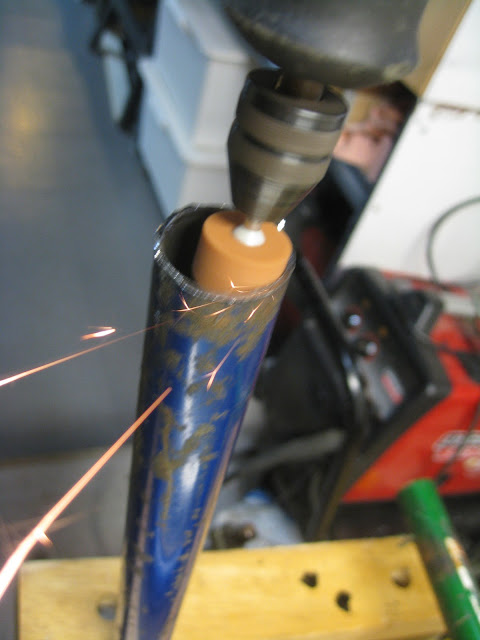 ..and a wire brush on the drill press for the outside. That was a big help since all I needed to do was hold the tube in my hands up against the brush which made short work out of the various paint. 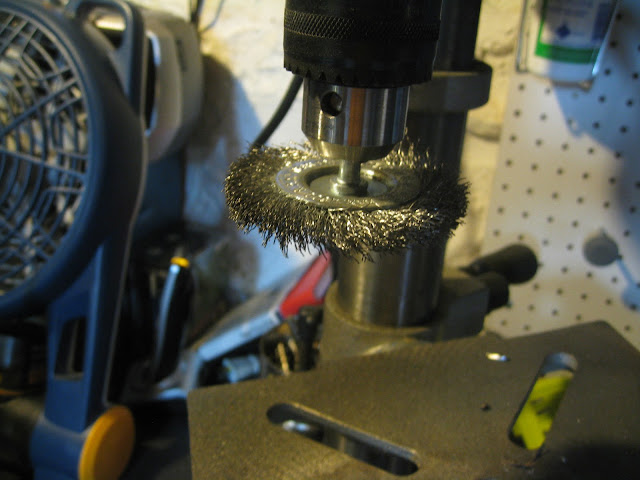 As I played around with the tubes, I discovered some of them would fit nearly perfectly inside of others – which was great since what I wanted to make demanded two tube more than three feet long. When I had nested the tubes inside each other at the proper length, I marked the inner tube with a felt-tipped pen and ground out all the ink with the brush on the drill press. Once done, I reassembled the tubes and used magnets to hold them in place for the welding. 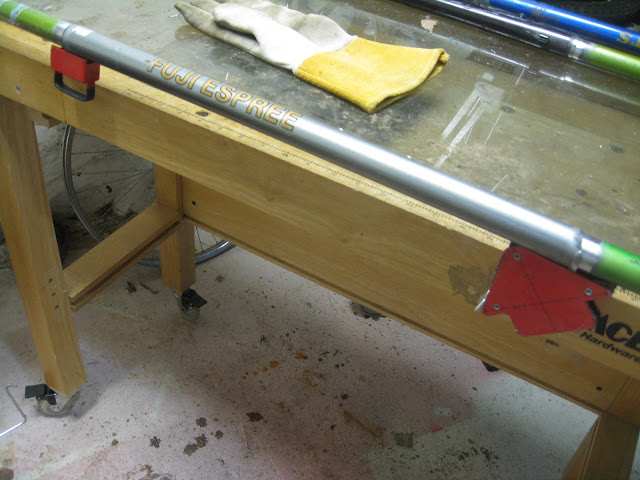 Mindful of the disaster when building the DiamondSchwinn, I made sure to turn the voltage dial down so I wouldn't burn through the thin bike tubes. Since I was patient this time some of my welds looked rather...dare I say...pretty. 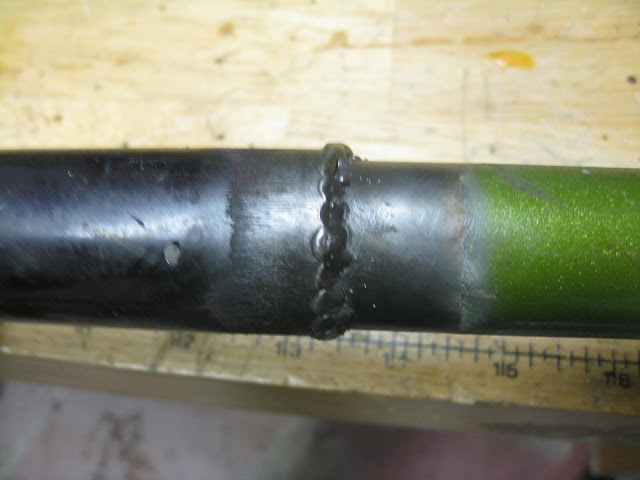 Once that was done, I had to make my first angle welds. I again used magnets to hold the tubes in place and made a square to be sure it would go on at a right angle. The metal tabs on the Peugeot that had held a frame pump long ago would become useful once again – as would the frame pump tabs on the Raleigh. 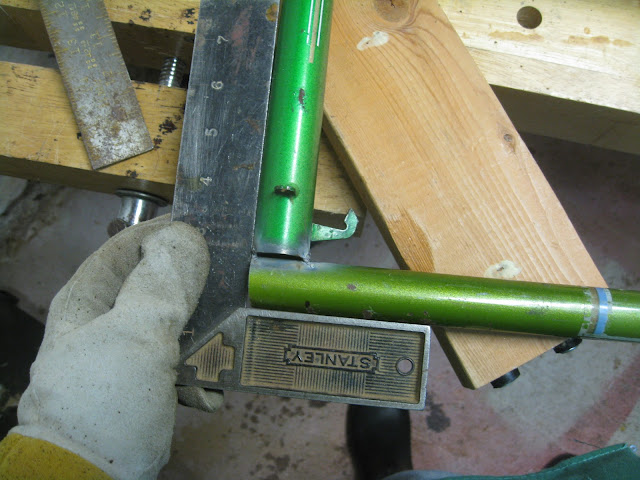 I had to do that tricky weld three more times, and luckily there were no real problems. Finally I came to the part of the build that would be the toughest: I needed the four seat tubes to be the exact same length and weld them perpendicular to each of the four corners. I used the rig on the chop saw to cut the seat tubes, and though one must have slipped out of the rig slightly (thus making it almost imperceptibly shorter than the others) I was pretty sure what I had in mind for these would work. In case you're wondering, from left to right it is France, Japan, England and U.S. 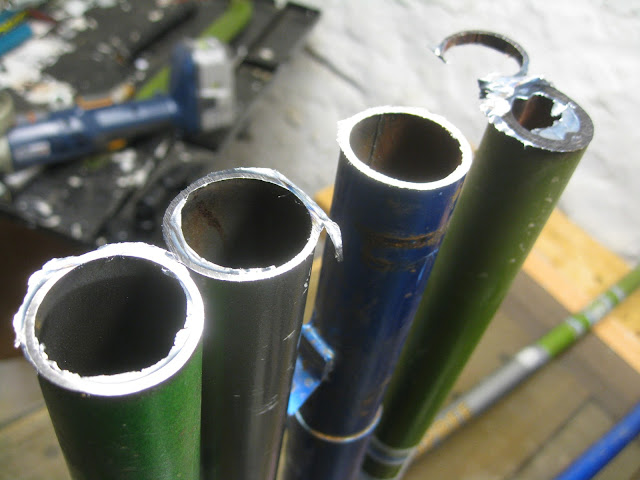 I tack welded each seat tube first, and only once did I have to break it off when the angle wasn't right. But soon enough, everything was set up the way I wanted it, and everything was set up to cool while I headed out of the welding room so I could clean the last part of the build: a piece of tempered glass which had come from a cheap stereo cabinet years earlier. For years, the glass was stored in various locations in and around my house, and finally, after furiously cleaning both sides, it was ready for what I had saved it for, and my build was finally complete. 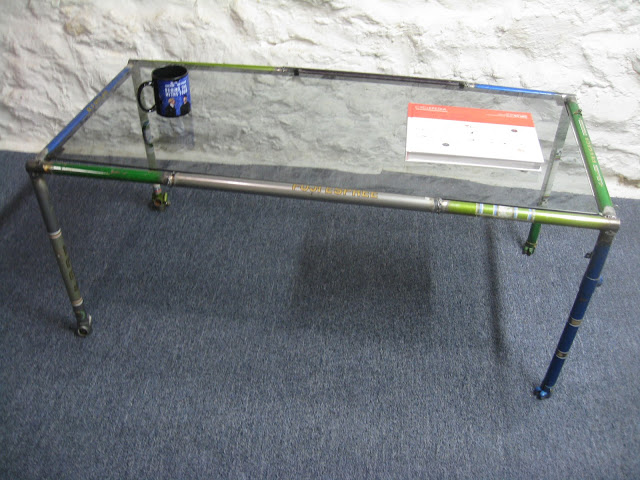 I once joked that Cyclepedia was so beautiful I wanted to make a coffee table to put it on. But over time I thought: why make a joke at all? Why not make a coffee table instead? So that's what I did. The elbows came out straight and true, and the metal tabs on the Raleigh and the Peugeot frames that held frame pumps were now supporting the weight of the glass. It's as if the glass is the Chunnel between France and England. 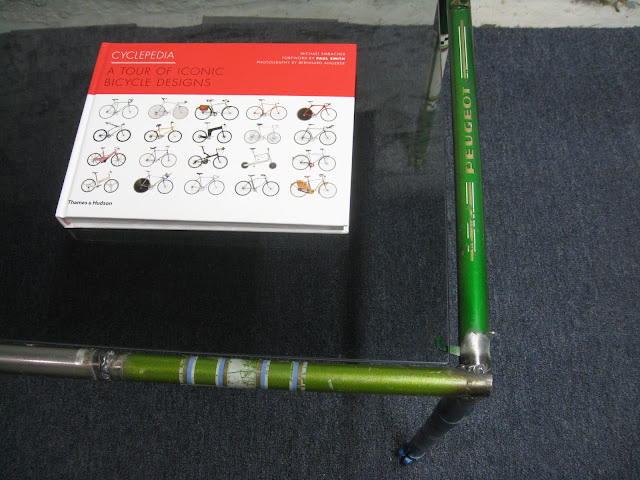 Nesting the tubes together for the long pieces made the table unbelievable strong and stiff – not to mention surprisingly light. Also, I intentionally made the legs with the seat tubes mounted upside down so in the future if I could round up enough seatposts, I could make the legs on the table longer and turn it into a pretty rockin' desk. But now, it is the DIYBIKING.COM signature coffee table; the one that will become an iconic image should I ever get my own TV show (much like the engine block coffee table seen on Top Gear). 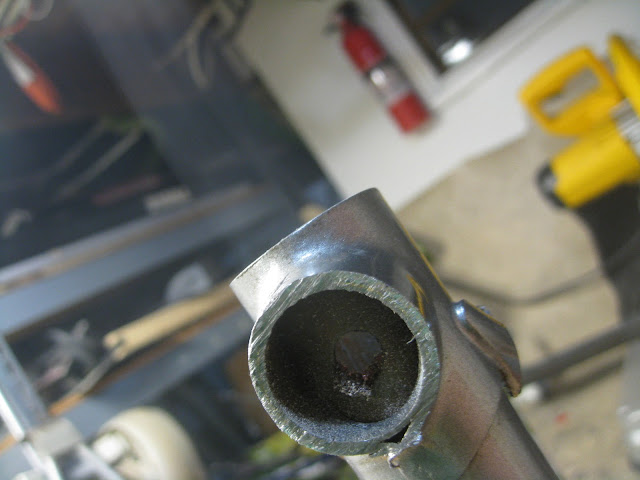 Email ThisBlogThis!Share to TwitterShare to FacebookShare to Pinterest
Labels: builds, Saved from the Scrapheap